Hey TransFans, it’s Transformers Thursday again and as I promised last week, TFT is getting hijacked by Bayformers! You know what that means… 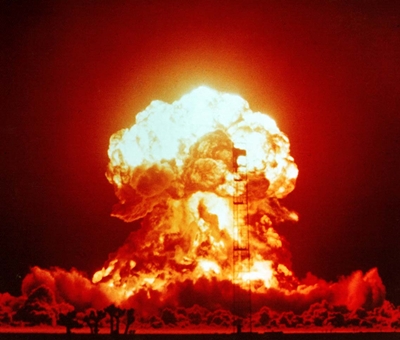 100% MORE EXPLOSIONS! No, actually it just means that I’ll be looking at figures from the three Michael Bay movies as we approach the impending release of Age of Extinction where Optimus Prime will ride Grimlock into battle while bellowing, “I came in like a wrecking ball.” I’m 41. I’m both ashamed and dismayed that I am hip enough to make that reference. Anyway, just to pour salt in everyone’s eyes let’s kick things off with everyone’s favorite racist robot twins… Skids and Mudflap… as an ice cream truck. 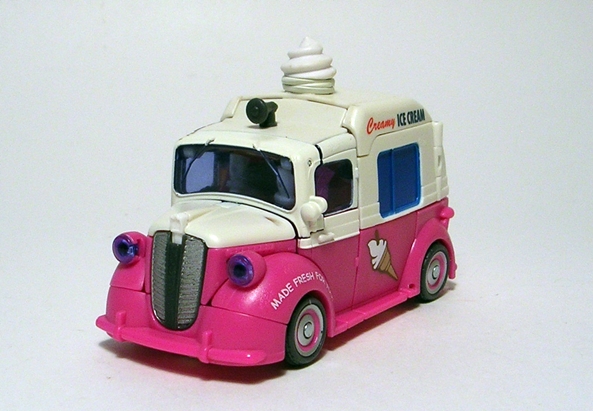 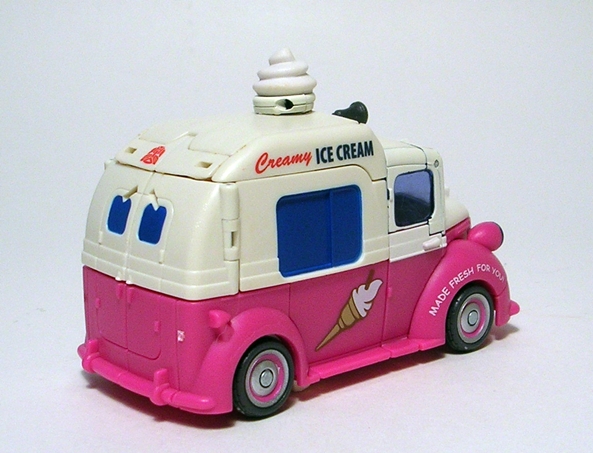 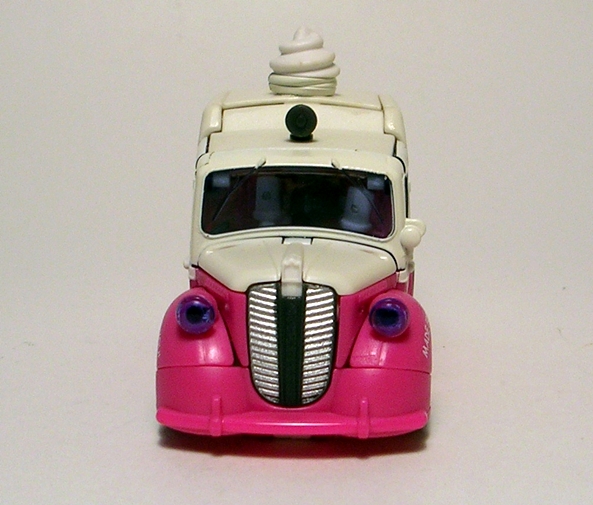 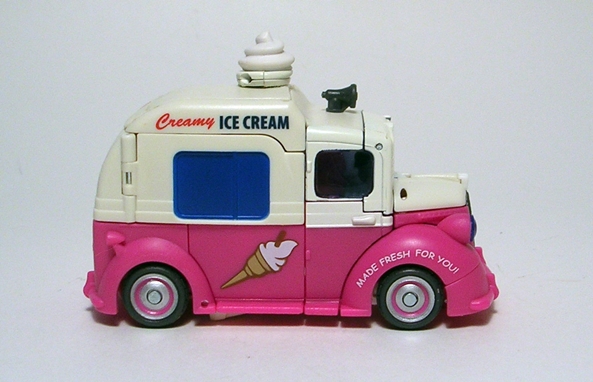 Obviously the packaging is long gone, but I can still remember how hard this figure… er, these figures… were to find. At the time they were going for a fair amount of money online and I finally found one in a CVS or a Walgreens of all places when I ran in to get some cough drops and flu medicine. At the time I wasn’t really committed to buying a lot of Revenge of the Fallen figures, but this was a freaking transforming ice cream truck. How could I not buy that? I don’t care if freaking Uwe Boll made the movie, I can’t not buy a Transformers ice cream truck. Satan himself could have come up with this idea and I still would have applauded and supported it. 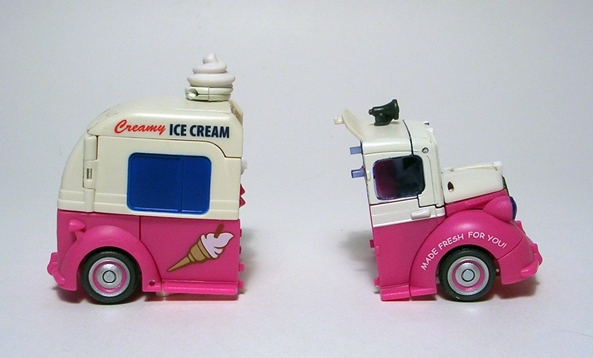 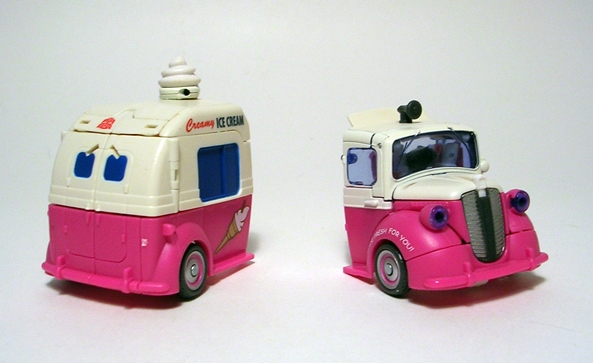 Besides being an ice cream truck, I also love the fact that it’s a vintage one. There’s something about Transformers with vintage alt modes that does it for me and Revenge of the Fallen actually gave us a few of them. It seems like the Go-Bots were a lot more willing to do stuff like that. Anyway, this is a great looking alt mode, complete with soft serve swirl on the top and a loudspeaker to blast the music. The two-tone white and pink colors work well for what it is and the ice cream cone tampos and lettering show that Hasbro went that extra mile for this truck. I’ll confess to be a little put out that it doesn’t have “Decepticons, suck my popsicle” anywhere, but I’m guessing that was deemed a little inappropriate for a kids toy. The deco is bright and cheery as opposed to the rusted out vehicle used in the movie, but if you look closely enough you can actually see where Hasbro included rusted spots as part of the sculpt. I should add that this is a really solid and sturdy alt mode when you consider that it pulls apart to become two robots. Let’s look at the front half first. I’m proud to say I had no idea which robot was which, but a little research tells me that the front is Skids. 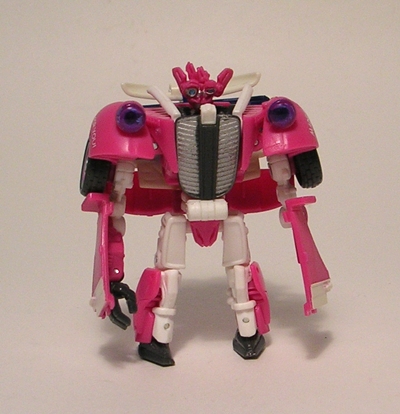 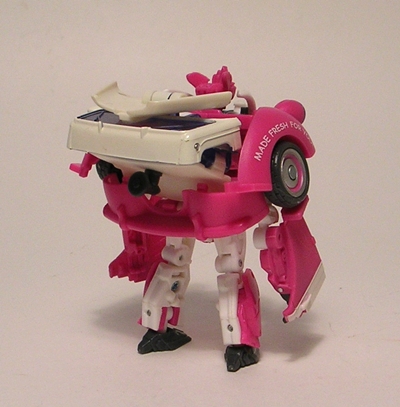 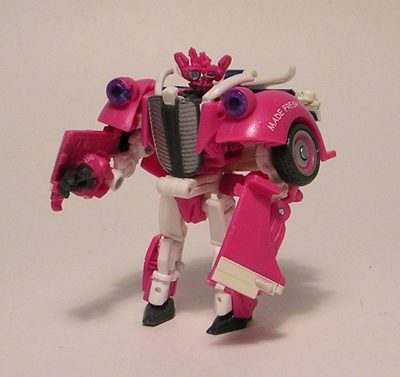 Oh, sweet Jesus. Ok, I’m going to try to be a little generous here. For a figure that’s engineered from half a Deluxe alt mode, it’s hard to come down really hard on Skids. I don’t like his arms, I think they could have been done better. I don’t get why his right arm has a real hand and the left one is just sculpted in and left unpainted. I think the whole gimp hand was part of his character design and I don’t really get it. I think only Michael Bay gets it. I dig that he wears the truck’s grill as his chest and I dig the way the old-timey fenders become his shoulders. If Hasbro ever did a proper vintage Transformer, I’d like it to use a similar design element. Everything else is pretty bad. His tiny legs can barely support his upper half and as for the head sculpt… I had forgotten how terrible the Bayformer portraits were. Let’s see if Mudflap fares any better… 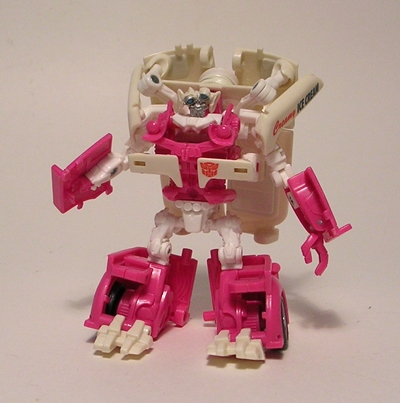 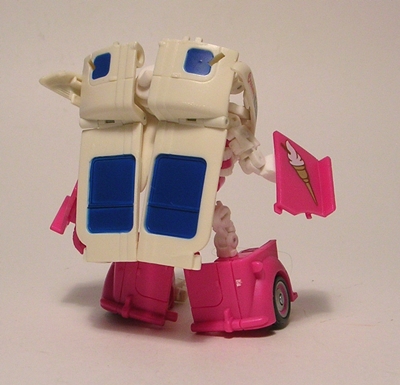 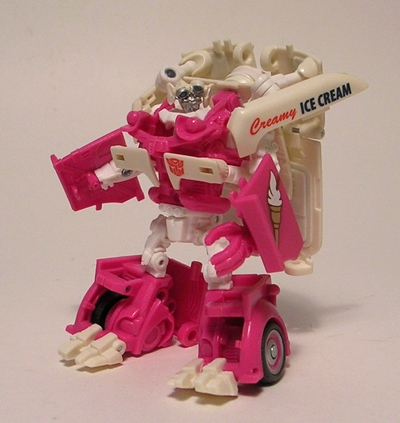 Nopenopenopenope… No! Without any recognizeable parts of the vehicle to base his robot mode on, Mudflap just looks like a goblin made out of shifting plates and linkages. He’s a perfect example of the jumbled mess that passed for a lot of Bayformer designs. Ok, so there’s something undeniably appealing to me that his shoulder slats read “Creamy Ice Cream” and he has ice cream cones tattooed on his forearms, but he’s still a freaking mess. 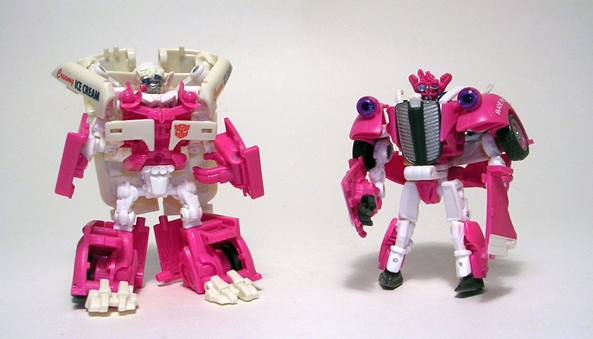 So, high marks for a great alt mode, but it’s hard to find anything to love in these robots. I have to give some credit for trying something different and I can’t deny that the scale had a part in crippling the outcome. Had this set been a Voyager sized vehicle, I think it could have been a lot better. But it still would have been limited by what are two of the worst Bayformer designs. Maybe I should just relax and try to see these guys as goofy and fun and be happy that something this bizarre exists. Does the charm of a Transformer ice cream truck cancel out the horror of Devastator’s wrecking ball testacles? I don’t know. No one does. There’s no quantifiable scale to make the comparison. But I can safely say that this was at least one interesting idea that came out of an otherwise horrid movie.

9 comments on “Transformers Revenge of the Fallen: Skids and Mudflap by Hasbro”