It’s no secret that Kotobukiya has been sucking down a whole lot of my money lately. It started with the Bishoujo line and then spread to their ArtFX+ statues. Now the epidemic has spread once again with my acquisition of one of their ArtFX statue kits. Not to be confused with the smaller 1/10 scale ArtFX+ the regular FX line consists of the full Sixth-Scale mamma-jamma’s. In my defense, I didn’t wander into this line by mistake, but rather with a single purpose in mind. I desperately wanted a Sixth Scale Mark VII Iron Man to display with my Hot Toys Avengers without having to blow the ridiculous amount of money that the Mark VII figure is going for these days. At least once a week I punch myself in the balls for not picking up that Hot Toys figure when I had the chance. Anyway, after a little searching around, this beauty seemed like a pretty good fit.

The statue comes in a large and wide package that dwarfs most Sixth-Scale figure boxes. Because this statue is a kit by nature, there’s no window or anything to show you the goods inside, but it does feature some nice artwork and some photos of the assembled statue. It’s worth noting that while this box was re-branded to take advantage of the hype behind Iron Man 3, the statue is the exact same piece that was previously released under The Avengers moniker. Believe me I know, because through a comedy of errors I wound up getting two of these in the same week (one from IM3 and one from Avengers) and in the end due to seller mix-ups and terrible customer service, I didn’t have to pay for either one of them. Freebies! Gotta love em. Branding this statue as part of the third movie doesn’t make a lot of sense, seeing as how little the Mark VII armor was featured in the Iron Man 3, but I’m sure it was just to cash in on the marketing juggernaut. 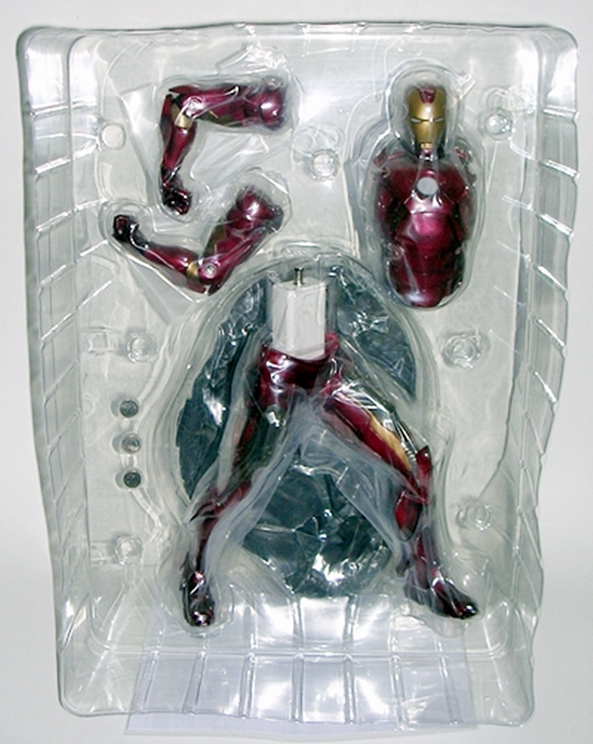 Avengers Assemble! Yup, as the box says this is a “pre-painted model kit” and as you can see assembly is required. The statue comes in four pieces (lower half, torso, arms) plus the base and the box for the electronics. You also get three button batteries. But not to worry, you don’t need to be Tony Stark to cobble this baby together. It’s a quick and easy job that just takes a few minutes. You pop the batteries into the box that sticks out of the bottom half of the figure, attach the arms to the torso and put the two halves together, lastly you plug the feet into the base and you’re good to go. Everything fits together very snugly and it is possible to disassemble it again without stressing any of the parts. Being a kit I was worried that this statue would be flimsy, but in hand that couldn’t be farther from the truth. The figure itself is solid and has a nice, satisfying heft to it. The base is made of lighter plastic and it is hollow underneath, but it still supports the figure beautifully. Once together you’d never know it was a kit. 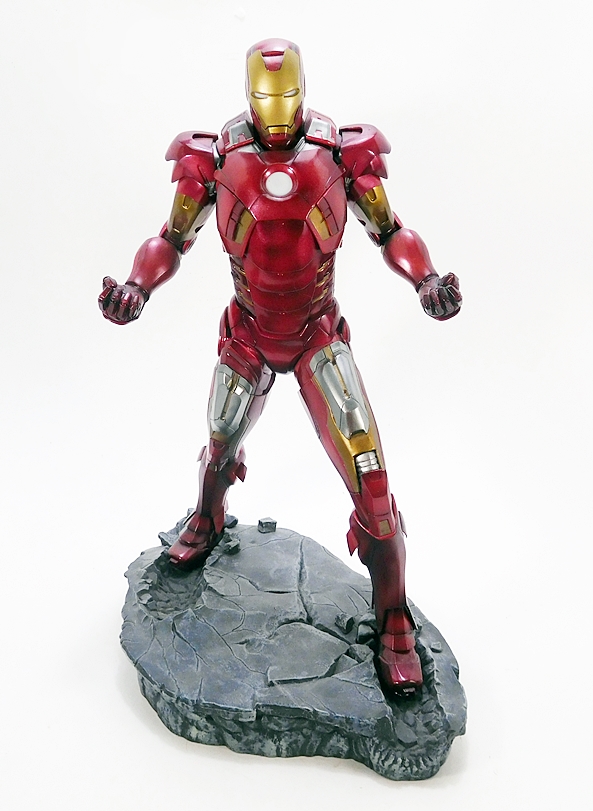 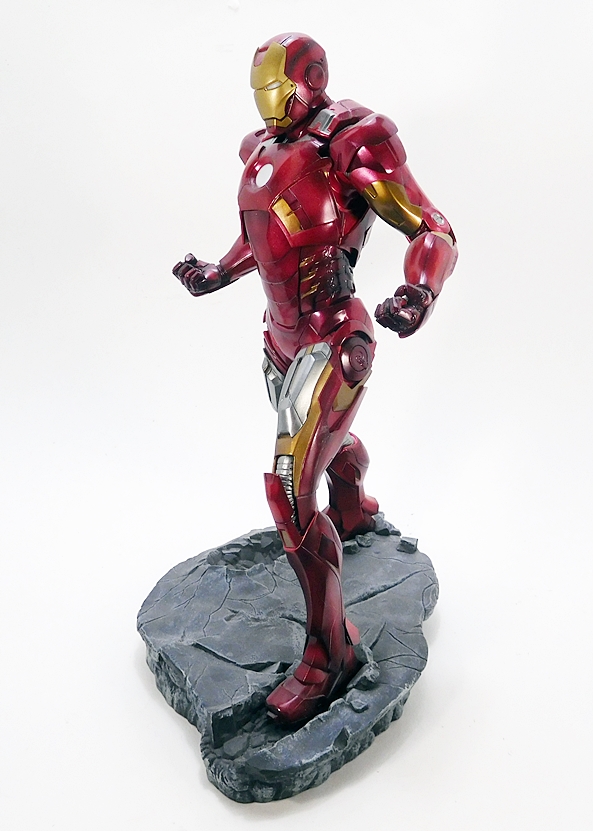 I really like the composition of this statue, mainly because it isn’t the now cliched “stop in the name of love” pose that has Iron Man firing off one of his palm repulsors. Hey, I dig that pose as much as the next guy, but it’s been done to death and it’s nice to see something a little fresh for this piece. In this case we see Tony in the process of channeling his repulsor power through his Arc Reactor. His elbows are bent and his hands are clenched into fists while the sheer power of the blast causes his feet to dig trenches into the ground. Awesome! In a sea of Iron Man collectibles, I think this one stands out primarily because of this pose. It works well and it really conveys a sense of sheer energy and excitement that makes for a great looking display piece. 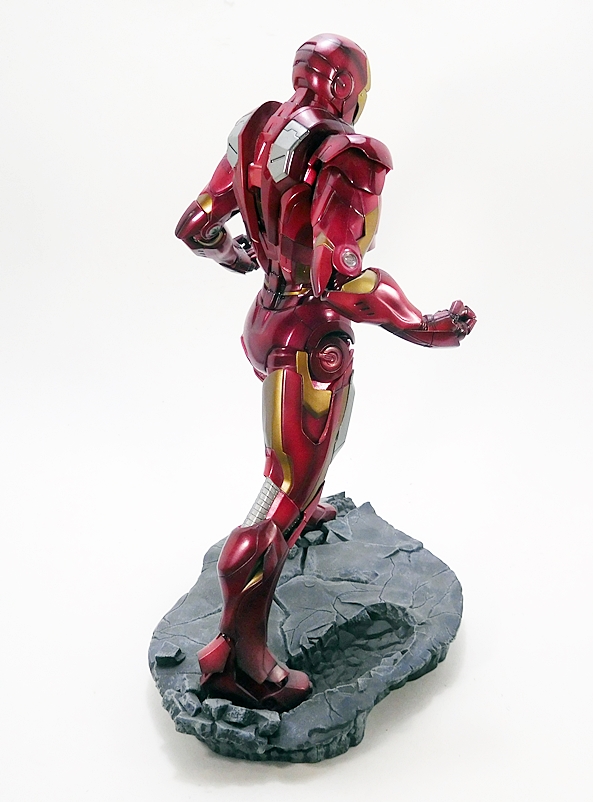 The Mark VII armor is hands down my favorite of any of the movieverse suits and I own enough 3D representations of it that I feel I know it intimately. I doubt anyone will ever do it as well as Hot Toys, but Koto took a swing here and I think they nailed it as best they can in statue form. Granted, the Mark VII is a fairly complex suit and it really does need a lot of individual and articulated pieces to make it stand up to close scrutiny. The sculpt here isn’t up to Hot Toys quality, it can’t be because it’s sculpted from solid plastic, but what’s here is still plenty detailed and I love it. The panel lines are all present and you even get some opened flaps on his legs. I also really dig the bulky stature of the upper body. One thing so many Iron Man figures get wrong is the scale. There’s supposed to be a guy in there and the proportions of this statue makes me believe it.

I expect nearly flawless paintwork from my Koto statues, and the Mark VII here doesn’t disappoint. The metallic red luster on this figure has that supple new car shine that makes the armor appear as if it just rolled off the assembly line. The high gloss red contrasts nicely with the slightly duller silver and gold to create this iconic ensemble that has become so familiar to both movie and comic book fans alike.

Of course, bases can sometimes make or break the composition of a statue and in this case, it definitely enhances and elevates the presentation. The way his feet are tearing into the ground adds excitement and intensity. What’s surprising is that the base is a simple hollow piece of plastic, but when viewed from above it looks like something far more substantial. Beyond just looking great, it serves the ultimate purpose of giving the figure a solid foundation to stand on.

The electronics consist of powerful LEDs in the chest and eyes. It’s nothing we haven’t seen before, but it’s nice and bright and makes for a striking effect. The concealed switch is easily accessible simply by removing his left shoulder plate. In addition to the regular on and off settings, there’s also a sensor setting that will light him up when it detects movement or changes in room lighting. 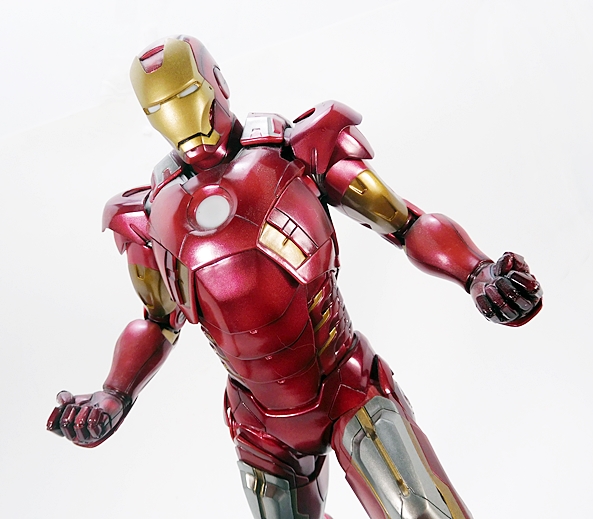 Even though I wound up getting this piece for free, I went into the deal paying $120 for it. I was a little leery about spending that kind of money on something like this when I wasn’t sure what to expect, but Koto has never let me down in the past and they certainly haven’t now. The sculpt, paint, and sheer heft of the piece make it well worth the price. The pose is pure killer stuff and best of all this piece displays beautifully on my Hot Toys shelf, which is why I got it in the first place. But the best endorsement I can give this piece is that I’ll be hunting down some of Koto’s other statues in this ArtFX line. Because they just aren’t getting enough of my money as it is.