Alrighty, toyhounds, strap in because today’s a doozy! I’m checking out Hot Toys massive Bruce Banner and Hulk 2-pack. Ha… 2-pack! That’s a term that sounds appropriate for disposable razors and toilet paper, and not so much high end collectibles. Nonetheless, Hot Toys has taken their massive sold out Hulk figure and bundled it with their new Bruce Banner figure and wrapped it all up in one big $510 package. It may be two figures, but as far as collectibles go this set represents the most money I’ve ever dropped on a single box. Today I’m going to look at the packaging and The Hulk and tomorrow we’ll look at Dr. Banner. 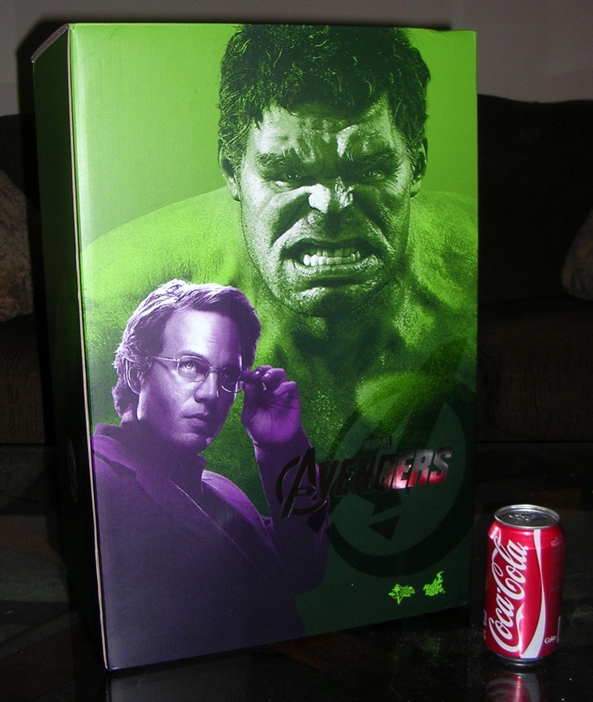 The box is massive. It’s so big that there was no way it was going to fit within the confines of my backdrop, so I just snapped it on my coffee table along with a can of Coke to establish scale. Sideshow wouldn’t lend me their apple. Despite its size, the box is designed to complement the package designs used for the other Hot Toys Avengers figures. The only real difference is that this one doesn’t have a sleeve. The front has an excellent shot of The Hulk and a rather poor shot of Dr. Banner. I’ve heard at least a few people complaining that the packaging here isn’t more special, but I’m rather pleased that they kept it in line with the rest of the series. Anyway, the top flap of the box opens and you can slide out the contents. 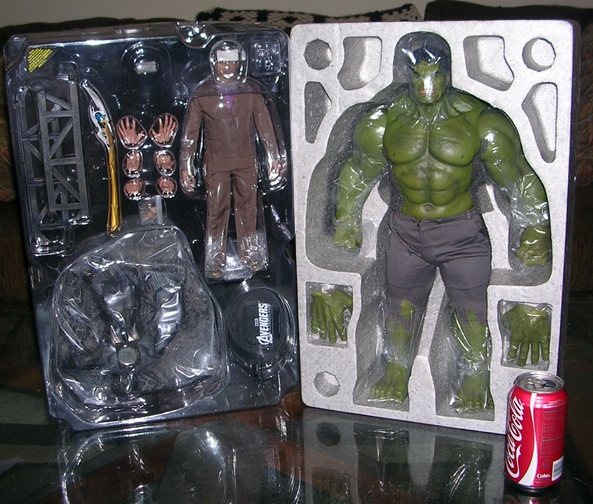 Inside, you get a large foam tray that holds The Hulk and his two swappable hands. On the other side you get an equally large clear plastic tray that has Banner and all the other accessories. It’s certainly an impressive layout and there’s no better way to demonstrate the sheer size of The Hulk figure than seeing him in his tray next to Banner. Keep in mind, Banner is not a tiny figure. He’s actually taller than Black Widow and less than a head shorter than Thor. But we’ll get to that tomorrow. Suffice it to say, opening these trays and laying them out gave me a nice sense of value, even considering the ridiculous amount of money I laid out for this set. Let’s get The Hulk out of his tray and check him out.

When standing fully erect, I’d say this guy is about 18-inches, putting him at about the same height as NECA’s ¼-scale figures. Of course on display, you’ll want to have him hunched over and even then he towers above your average Hot Toy figure and one of his fists is considerably larger than Thor’s whole head. What’s more this entire figure feels like solid, heavy plastic. The only place there’s any squishy parts is in the elbow jointing and the rest of The Hulk’s body is rock hard. Obviously a big part of Hot Toys’ wow factor comes from a combination of superb head sculpt and outfit crafting. The Hulk doesn’t have much to offer in the costuming department, although the torn pants are quite nice and fit the figure very well. The rest of the figure still manages to impress with an intricate muscular sculpt all sorts of tendons and veins and even some sculpted chest hair. 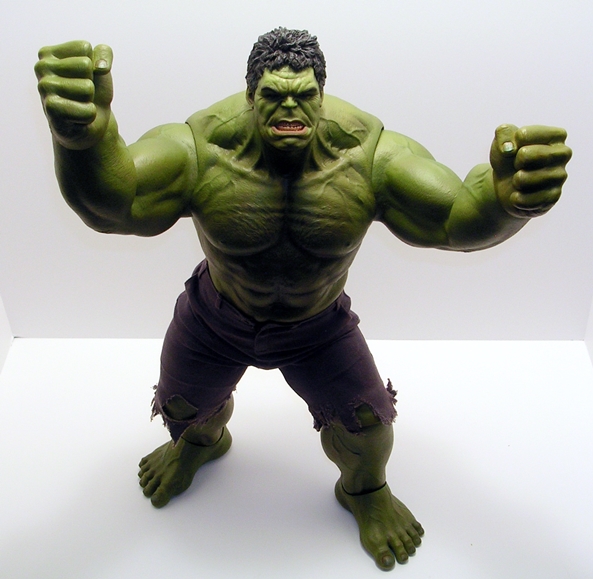 Yes, there is exposed jointing in the figure, which can be a bit jarring for Hot Toys collectors, as they usually do a good job hiding it. Hulk’s elbow joints are concealed under the “skin” of the arms and the hips are concealed under the pants. The ball jointed shoulders are easily the most obvious and unsightly of the joints as you can clearly see the gaps in the torso where the shoulders fit in and move. Depending on how you pose Hulk, you’ll likely also be able to make out the knee joints. The wrist and ankle joints are also visible, but not nearly as much. None of what I’m saying here is meant as a criticism of the figure, but it’s worth pointing out just because it’s not the norm in a Hot Toys figure. It’s just a necessary evil for the articulation.

And how about that head sculpt? The portrait here is nothing short of phenomenal. It’s obviously Hulk from The Avengers film, but at the same time it works beautifully as just an iconic Hulk portrait. The expression is pure rage and the eyes and teeth are so real looking that it’s just plain eerie. The sculpted hair looks great, although if you look close enough you can make out the seams where the top of the hair lifts off to grant access to the PERS system. PERS is the Parallel Eye Rotating System and it basically gives you access to tiny joysticks on the back of each eye so you can reposition them. It’s a very cool, and slightly off-putting, design that I honestly think could have been left out of The Hulk. His eyes are set so deeply that even when I reposition them it’s hard to notice any difference. Plus, the system works well with figures that require expressive changes based on different poses. The Hulk’s only expression is rage and the only place I need his eyes pointing are at the thing in front of him that he’s about to smash. I’m guessing Hot Toys wanted to add some value to the figure and seeing how big he is, it was rather easy to put in the PERS feature. Still, I doubt I’ll ever make use of it. 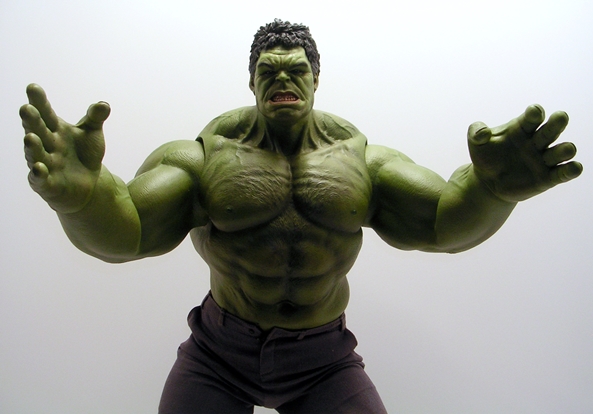 Hulk comes with his two fists installed, but he also has two open hands, each with four poseable fingers. It’s rather easy to swap the hands and chances are I’ll probably have him displayed most of the time with a left fist out in front and his open right hand hanging back. The open hands also come in “handy” (HA!) for a couple of the extras that Hulk comes with in this set. And that brings us to the accessories!

One of the complaints about The Hulk’s initial release was that he was very light on accessories. In fact, there were no accessories, not even a stand. All you got was the figure and the two extra hands. Hot Toys remedied that a bit with this release, by tossing in a few bits from previous sets. First, you get a diorama base with a dead Chitauri on it. I’m pretty sure this piece is a straight repack from the battle damaged Mark VII Iron Man Armor. It’s still a surprisingly fitting stand for The Hulk. It’s certainly big enough for him and there are even two places on the base that look like they were made for him to stand.

You also get a pair of twisted girders or support beams, which Hulk can hold in his poseable hands. I’m pretty sure I read that these were recycled from another set too, but I don’t know what they came with originally. They’re pretty lightweight accessories, but I can’t deny it’s nice to have something for Hulk to look like he’s tearing apart. 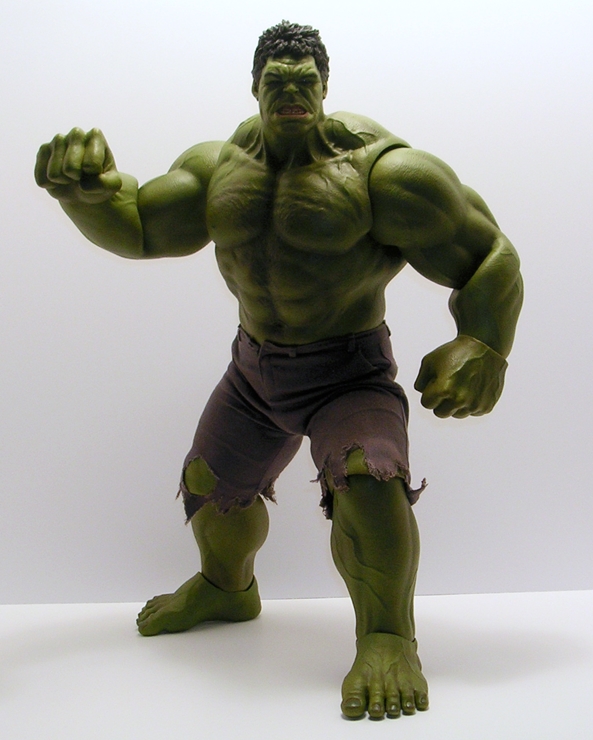 While I think Hot Toys had to sacrifice a bit of their wizardry for the type of figure this is, I’m still absolutely amazed by the way he came out. Sure the visible jointing steps on the uncanny illusion of realism that you get with most Hot Toys figures, but I find that it’s not making me love this big guy any less. Besides, I’d rather have the jointing than some kind of experimental rubber skin that’s going to tear over time. If you’ve already picked up the first release, the extras certainly aren’t enough to make anyone want to double dip, but probably enough to cry foul that the stand and girders weren’t included with the al a carte version of the The Hulk. Tomorrow, I’ll wrap up my look at this set with the Bruce Banner figure!