Hooray It’s Classic Doctor Who time! I got this set in the same box as “The Daemons” Set, which I looked at ages ago. Needless to say this one’s been sitting in my receivings pile for a while now. I think I put off opening because I know that aside from the Doctor-Dalek Two Packs, this is the last Classic Who set we’re going to get from Character Options for quite a while. In any event, I should point out that this set shouldn’t be confused with the other “Claws of Axos” based two-pack, which included The Master and an Axon and was released way back in late 2010. 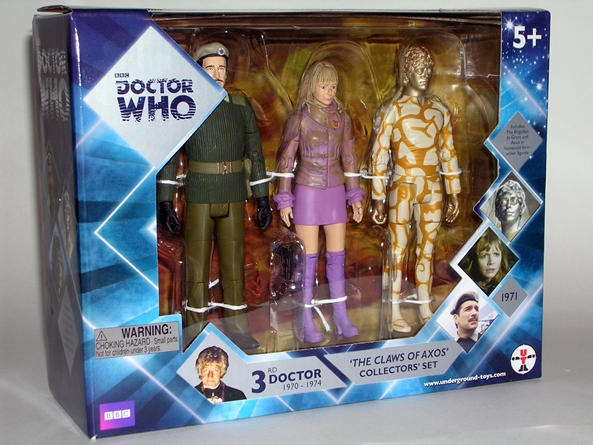 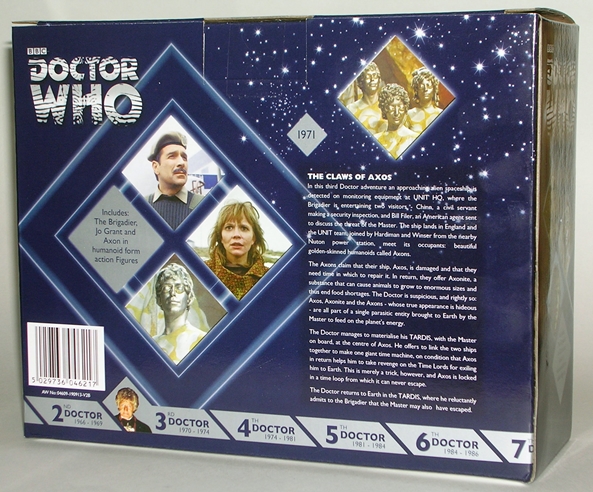 The set comes in the same style box as the last Classic Who multi-packs. You get a deco that’s fairly reminiscent of the 70’s Pertwee Era. There are some stills of the characters and a blurb about the story on the back of the box. The set includes another variant of Brigadier Lethbridge-Stewart, a new version of Jo Grant, and an Axon in humanoid form. If you have a problem with double-dipping on characters, this set might not strike you as a good value, but as we’ll see this is a very different (and much better) version of Jo Grant and as for The Brig, well I can never have too many figures of the beloved Brigadier. Since he features the most recycled parts, we’ll check him out first. 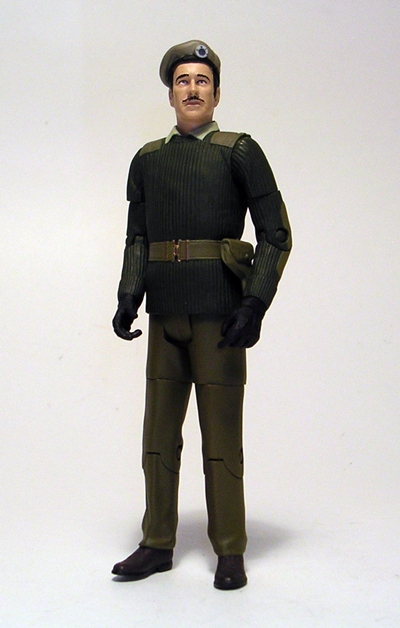 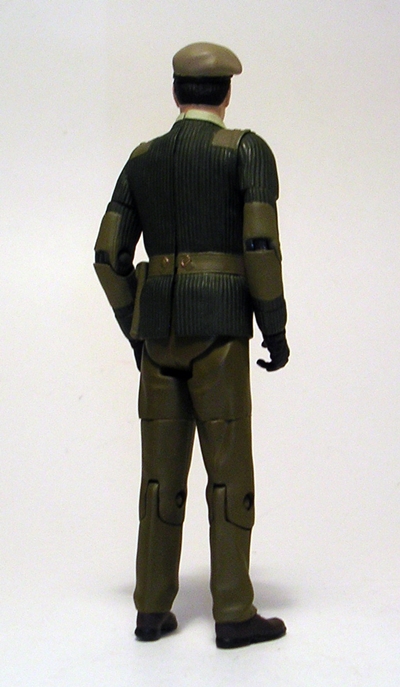 And here we are: Brigadier Alistair Gordon Lethbridge-Stewart. So, what we have here is the same basic body as the last Brig release only with a new head sculpt. It’s the first time we’re getting The Brig wearing his UNIT beret and I like it a lot. It just seems more natural to me that if he’s wearing his tactical sweater he should have the beret rather than his officer’s cap. As a result, I tend to consider the Brig in his full dress uniform and this one as the two essential versions. You’ve got one Brig for Sunday Best and one to go out in the field and shoot aliens up the bracket. Sure, the figure that came with “The Daemons” set is a nice variant, but largely unnecessary. 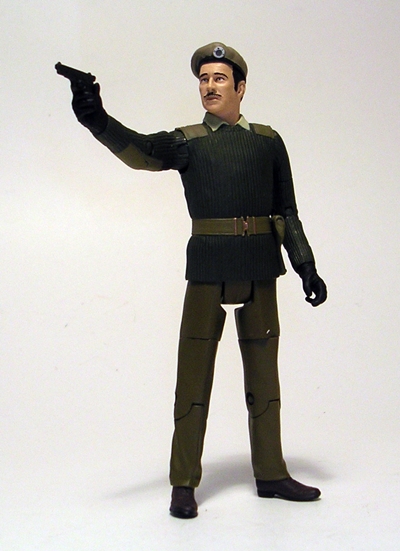 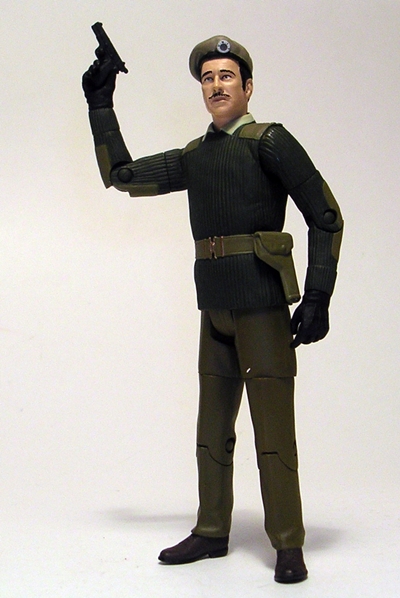 This time around The Brig only comes with his handgun, and it’s the same gun we’ve seen twice before. After the cornucopia of accessories that came with the last Brig, some collectors may find this set a little stingy with the extras. I could argue that another swagger stick would have been welcome, but that’s Ok, at least I got one with the last release. 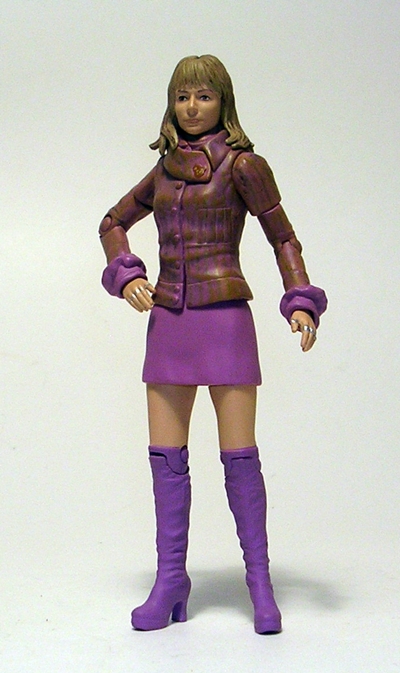 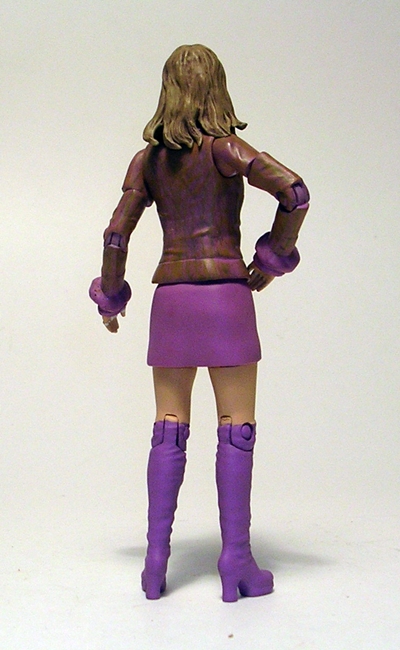 The last time we saw a Jo Grant figure was in the Three Doctors boxed set. It was an Ok figure, but I think CO phoned in the head sculpt. It seemed like a weird mix of old and young Katy Manning. This new figure reuses the same hair, but the portrait is a vast improvement. The outfit consists of a purple skirt, purple go-go boots, and a really funky top. It’s 70’s chic through and through. The paintwork here is also top notch, right down to the silver paint on her individual rings. Yes, the previous Jo Grant figure had swap out arms and a removable jacket, and this one offers no such surprises. Still, I think I’ll retire the previous release in favor of this one on my display. 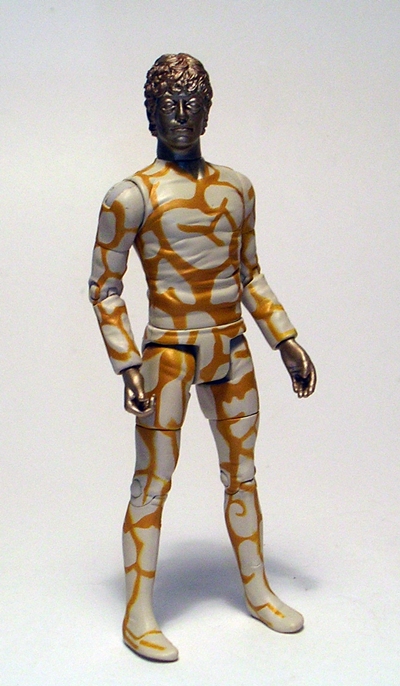 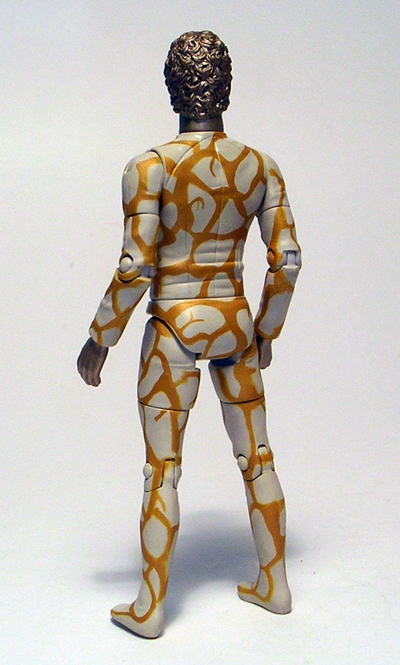 Last up, you get the Axon in his humanoid form. This is the way these guys looked when they first arrived on Earth and were trying to dupe us stupid humans. I really dig the design here, even if in the show it was just a painted unitard and a gold mask. The design works even better in action figure form. I’m not sure if the unitard was supposed to be clothing or skin in the TV show, but CO recreated the costume on the figure with all the little wrinkles. The gold paintwork is well done and I think this Axon head sculpt is right up there with the Voc Robot figures in its accuracy and attention to detail. Very nice! 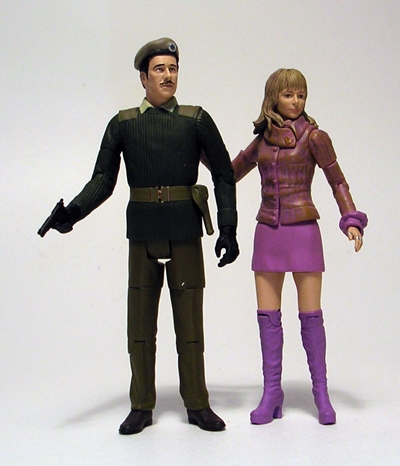 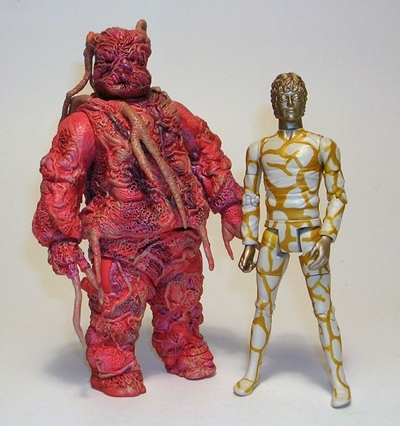 Articulation on all three figures includes the more modern ball jointed shoulders that so many of CO’s Doctor Who figures sadly lack. The arms also include hinged elbows, swivel cuts in the biceps and swivels in the wrists. The legs feature a T-crotch which includes lateral movement, swivels in the thighs, and hinges in the knees. They can swivel at the waists and the heads can turn. 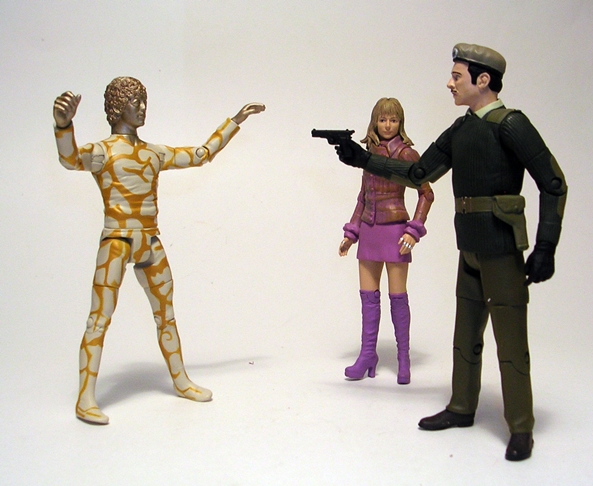 It should come as no surprise that I love this set. The figures are all excellent and while two of the three are quite possibly characters that are already on every Doctor Who collector’s shelf, it’s still a set that is worth a look. The Jo Grant is definitely the better of the two versions released and I consider this version of The Brig to be a must have, right next to the one from The Three Doctors set. As for the Axon… who doesn’t want more Classic Who monsters on their shelves? Besides he displays real nice next to the Axon in its natural form. Still, opening this set has been bittersweet, because CO hasn’t shown off anything else quite like it, and it may very well be the last of these boxed three-packs from the Classic Series. And that makes me a very sad Whovian.