It’s Transformers Thursday, and I believe this is Week #6 of TFT being held hostage by the Bayformer menace. Today my random grab into the Transformers Movie Tote pulled out Deluxe Class Brawl from the first movie. Or is that Devastator? Yeah, the people making this movie cared so little that they couldn’t even get the name of the character right. How did they not even clean that up for the home release for Chrissakes? Anyway, there’s no in-package shot so let’s jump right to Brawl’s alt mode. 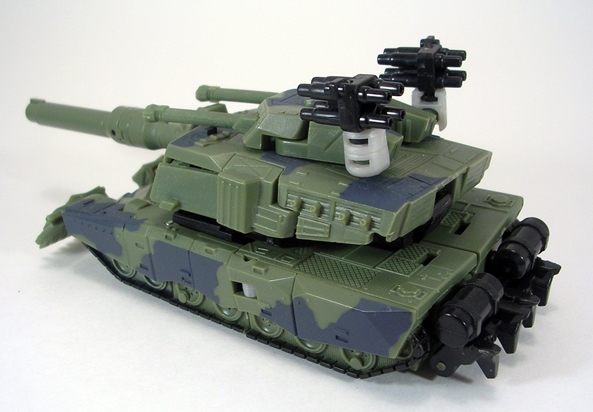 Yup, he’s a tank. He’s actually a pretty nice looking tank too. You can say a lot of bad things about some of these movie toys, but for the most part they had really good alt modes. There’s some nice attention to detail in the sculpt, including bolts, hatches, mesh grating, and the individual wheels in the treads. Brawl sports a simple green camo deco that’s appropriately understated for his military nature. There’s nothing flashy or terribly special here, and certainly not a lot of visible paint apps, but it’s a solid effort that leaves me with no complaints.

Brawl’s tank mode even features a decent amount of articulation. The main turret will turn left and right as will the secondary turret on top of that so the smaller guns can track flanking Autobot targets while the main gun is pounding away at something else. You also get two small missile packs mounted on ball joints on top of the main turret. Brawl is basically guns on top of guns, and I can’t imagine a Decepticon would want it any other way. I should point out that Brawl’s main gun can fire a missile, but like most of my ’07 Transformers, I have no idea where that missile got to.

Transforming Brawl is surprisingly simple for a movie toy. The engineering here is so intuitive that’s it’s hard to believe the designers were able to get such a great robot and alt mode out of him. At heart, this robot mode is a great nod back to G1 Brawl with the front of the tank making up the chest and treads packing away neatly on his legs. The turret forms a backpack and it’s very clever the way his arms unfold from the turret so that the main gun from the tank lands on his right arm. You gotta love the arm cannon! It’s enough to make Megatron jealous. Another cool touch is the way the two guns peek up behind his shoulders just like G1 Onslaught. The plows on the front of the tank form a set of vicious chest armor, and he has a wicked claw weapon that folds out from his left wrist. 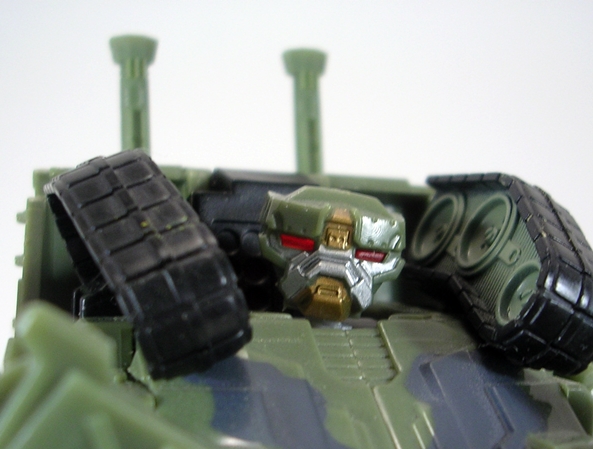 While I’m generally not a fan of the Bayformer portraits, I like Brawl’s headsculpt quite a bit. It downplays the whole insectoid look that some of the other bots have and there’s some pretty good light piping here too. I also really dig the way the treads land on his shoulders. It reminds me of the pieces that some medieval armor had to help prevent decapitations in combat.

Alrighty, so Brawl features a solid tank mode and a really great looking robot mode, but guess what? As a toy he’s still a piece of crap. Why? The shoulders! The shoulders are designed to tab into the torso and they simply will not stay locked into place. Get one in and the other pops out. Try to manipulate his arms and they pop right out. Stand him on the shelf and look at him funny and they pop right out. Dig a hole in the back yard and bury him… I’m going to guess they’ll still pop right out. Just trying to get some shots of him in robot mode with them still attached had me gritting my teeth in anger and frustration. Wait… why am I getting a sense of Deja Vous? Could it be that there was another Decepticon tank that had a floppy shoulder problem that ruined what was an otherwise fantastic figure? Of course there was… It was Generations Blitzwing. It’s nice to know that Hasbro learns from their mistakes.

And so what started out promising ends up a bust. Brawl has so many great things going for him, but it’s all for naught because of two goddamn tabs that won’t stay in place. It really hurts too because I wanted to love this figure so much. When I pulled him out of the tote I definitely recalled having some bad memories about this guy, but it wasn’t until I transformed him that I remembered those damn shoulders. But what really sucks is that I never ponied up for the Leader Class version of Brawl that now goes for ridiculous amounts on the secondary market. A design this cool deserves a solid figure and this Deluxe just ain’t it, but I hear that Leader version is quite a beauty.