To say I’m excited about the Guardians of the Galaxy movie would be a galactic understatement. After two amazing trailers and a lot of time spent re-reading the comics, I am seriously pumped for this movie. I was also really excited about the associated Marvel Legends wave, so much so that I picked up the case as soon as it went up for sale at Hasbrotoyshop. Sure, it meant getting a couple of doubles (the case has two Star-Lord and two Iron Man figures), but it worked out to only be about twenty bucks more than the single figure assortment at that other retailer. Either way, it also meant that I could instantly assemble the BAF Groot instead of worrying about hunting down one last figure like I had to do with the SHIELD Mandroid. I thought about covering this whole shebang in one week, but since I’m just coming off a theme week, I decided to parse them out to a couple figures a week. Let’s go right for the intended star of the movie… Peter Quill: Star-Lord!

The packaging here is right in line with the Legends Infinite Amazing Spider-Man 2 and Winter Soldier waves. The main difference is that this assortment pulls a lot more heavily from the movie whereas the others populated with comic characters at the expense of film-based figures. Seriously, Hasbro, no movie version of Falcon? Why would you do that? Anyway, I don’t have much new to say about the packaging other than I still dig the look of these window boxes and the fact that it’s totally collector friendly. I’ll also point out that Hasbro really packed a lot of shit into this package. Between the figure, extra head, accessories, and BAF part, there’s not a lot of free space left on that tray.

Star-Lord comes packaged with his masked head on, but I’m going to start out with the alternate unmasked head. But before we get to that, check this shit out…

Yeah, we have one of those rare examples where the actual figure is better than the package photos. In this case, the package photo shows a very different figure where the top of the trench coat is part of the torso sculpt and the bottom made up like a skirt on the bottom half of the figure, with an awkward waist swivel running right across the middle. It looks terrible. Thankfully, the final figure got the trench coat cast in soft plastic and attached to the buck with the arms sculpted to look like sleeves. Yeah, it’s the old sleeveless jacket trick, but it works great and is such a vast improvement over the crappy figure they photographed for the back of the box. 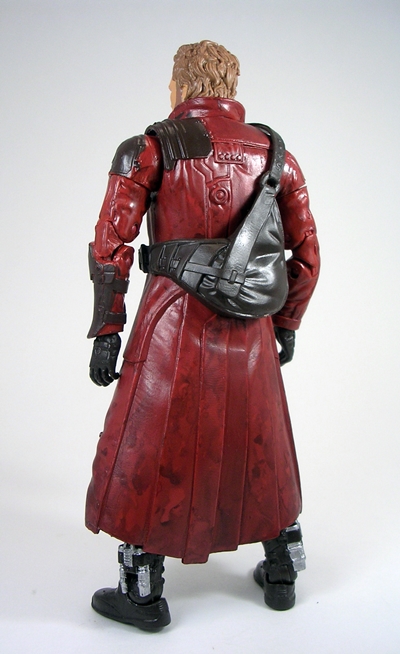 For what is basically a guy in a t-shirt, trousers and trench coat, Hasbro went all out on the details. Under the coat you can see all kinds of subtly sculpted pockets and texturing to the pants and he has the little jets, the ones we see used in the second trailer, sculpted and painted onto the outsides of his boots. The coat has a great weathered wash to it and again all sorts of little details. It’s also worth noting here that his loot satchel is a separate piece and easily removable. 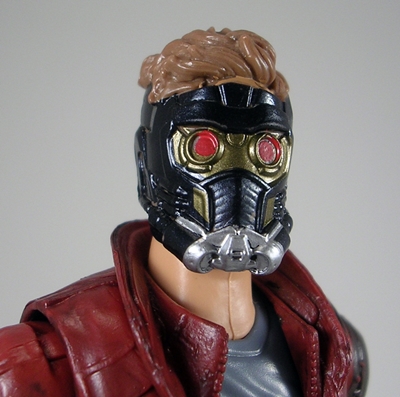 The two portraits consist of Star-Lord masked and unmasked. The masked head is fantastic. I really dig the movie version of the mask and Hasbro did a beautiful job recreating it here for the figure. The detail is sharp and with the exception of some minor slop on the red goggle paint, the paintwork is immaculate.

The alternate unmasked head is quite good, but I don’t know that the likeness to Chris Pratt is all that great. The eyes are painted a little too intense and the paint for the beard, while certainly tidy enough, is a little too heavy handed. That having been said, it’s still a perfectly serviceable portrait and for what it’s worth the sculpting for the hair is particularly well done. All in all it works for me. 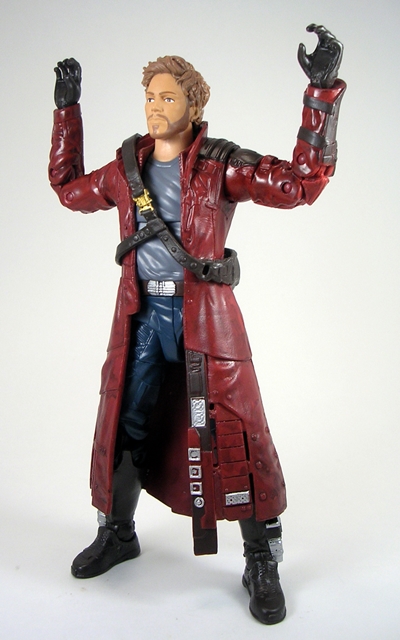 Star-Lord features the kind of articulation we’ve come to expect from the Marvel Legends line. The arms are ball jointed at the shoulders, double-hinged at the elbows, swivel at the biceps, and have swivels and hinges in the wrists. The legs are ball jointed at the hips, have swivels in the thighs, double-hinged knees, and both hinges and rockers in the ankles. There’s a swivel in the waist, an ab crunch hinge in the torso and a ball joint in the neck. I will note that Star-Lord’s joints feel very soft and mushy. Those super soft joints are usually a huge pet peeve of mine, but here it just doesn’t seem to work against the figure at all.

Accessories! In addition to the extra head, loot satchel, and BAF part Star-Lord comes with some nice extras. First off, you get that orb that is so prominently featured in the trailers. What is it? Well, apart from probably being one of the Infinity Stones, I don’t know. Unfortunately, since Star-Lord’s hands are designed to hold his guns, it’s pretty tough to get him to hold the Orb. I’d argue that an extra hand would have been in order, but there’s so much stuff in this box already, I guess I’ll let it slide.

Next up, you get his Walkman and headphones and I think it’s a hoot that Hasbro included these. Sure, the headphones are way too big and no, there’s no cord connecting them to the Walkman, but I don’t care. I just love that I can have my Peter Quill figure chilling to some Blue Swede while standing on my shelf. 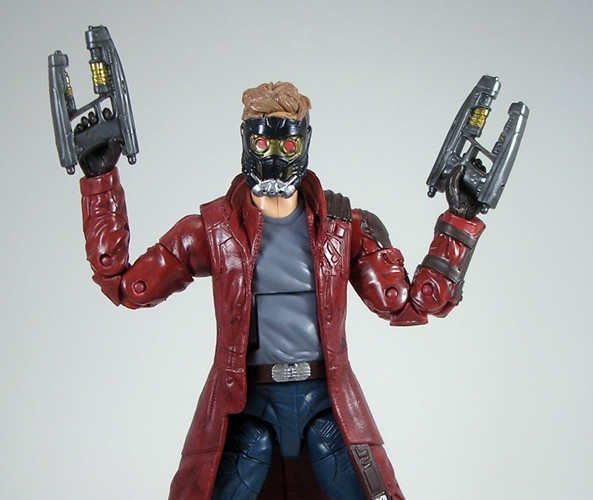 Lastly, you get his guns and these are absolutely bitchin. I presume they are meant to be the Kree weapons he uses in the comics. There’s still no sign that his Element Gun will appear in the movie. Nonetheless, I love these things! The designs are great, the sculpt is great, and the little touches of gold paintwork? Great! He can hold them well and he looks like a total badass while doing it. 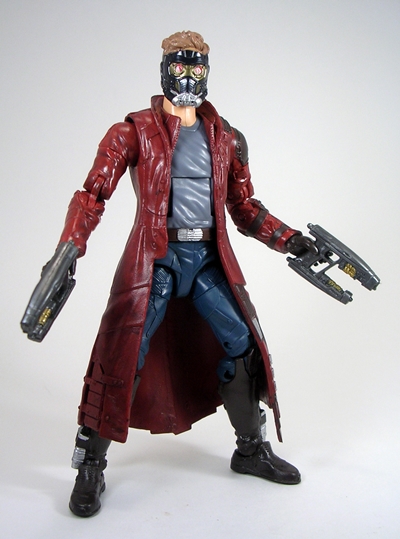 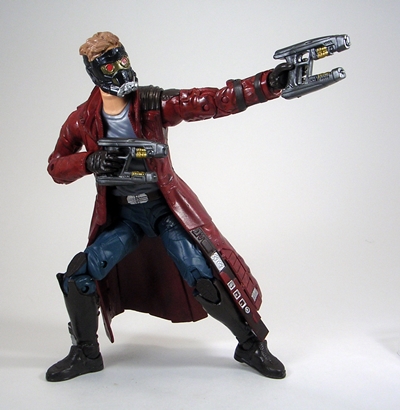 Hot damn, this figure is so much fun to play around with! The guns alone had me posing him on my desk long after I’ve put most figures down. This guy is going to be standing on my desk for a long time before going off to the display shelf. 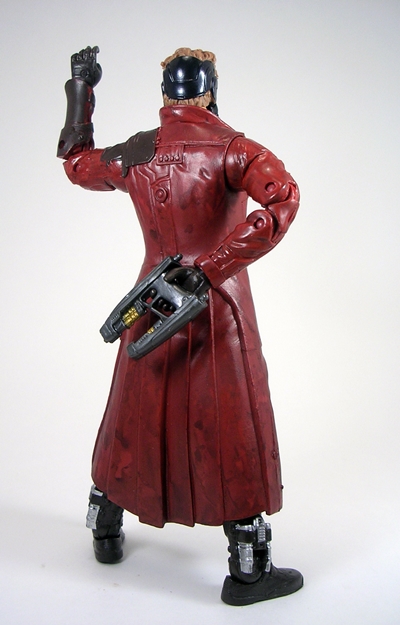 With the new boxes, shiny new branding, and heftier price tag, Hasbro has been trying to pass off Marvel Legends Infinite as a premium line of action figures. I liked all of the figures from the Winter Soldier and Spider-Man waves, but most of them felt more like regular Legends figures than anything super special. Star-Lord here certainly ups the ante. I think this is one of the better 6-inch figures that I’ve opened in a while. It’s clear that Hasbro put a lot of love into this figure and I’m very interested to see whether the rest of the wave can sustain that level of excellence. Either way, I’m glad this one came two per case, because now I can display him with both heads and all his different gear.

3 comments on “Guardians of the Galaxy Legends: Star-Lord by Hasbro”