I realize that I have a lot of new stuff that I should be getting to. I’ve got Marvel Legends and Kotobukiya and even a Hot Toys figure I’ve yet to feature. But I felt like going off the reservation for the rest of the week. I promise next week will be all new releases. In the meantime, join me for a three-parter weekend that will  take us through (almost) all the players in the Musical Extravaganza Show that occurs in Jabba the Hutt’s palace on any given night. These features are sponsored by a fellow collector who was giving up a lot of ten figures at a price I just couldn’t refuse. Let’s kick it off today with The Max Rebo Band. 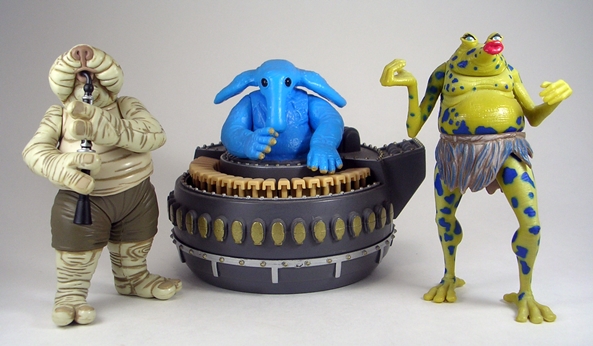 Max Rebo, Sy Snoodles, and Droopy McCool! These are not the Kenner originals, but rather from the late 90’s Power of the Force 2 two-packs that were associated with the dreaded Special Edition release of Return of the Jedi. Nonetheless, I can still remember that day as a kid when I first saw the originals. I think it was at a Sears, but I clearly remember skittering off to the toy aisle to see what I could find on the pegs when I was confronted with one of the most a-typical Star Wars figure sets that I had ever set my little kid eyes upon. It was a window box with the entire Max Rebo band laid out inside. I couldn’t believe that there were actually figures of these guys, complete with microphones and everything. I immediately entered full-on pleading and begging mode and after promising to mow the lawn for the next three weeks straight and engage in all manners of other menial child labor, my Dad agreed to get them for me. Of course, those figures are long gone. Max Rebo was one the most prized targets of my kleptomaniac dog, and who the hell knows what become of the others. So let’s check out these POTF2 versions. 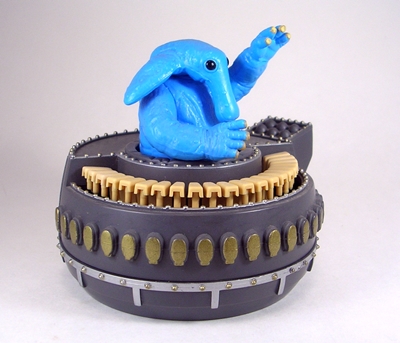 Max Rebo! How many keyboard players get the whole band named after them? Rebo does! He’s just that good! Did you know his real name is Siiruulian Phantele and that he eventually joined the Rebel Alliance because they have the best food? Wiki says it so it must be true. What difference does it make? He’s a blue elephant wearing diapers that plays keyboard for an intergalactic crime boss. This figure appears to be quite close to the original Kenner mold, but the hands are a bit different and he’s got a large ring molded onto his belt to keep his diaper up. The paint is also a lot better here. Not only is that diaper painted, but the tips of his fingers are as well. He’s a really vibrant shade of blue and he has two little beady black eyes.

I can remember how cool I thought it was that the figure came out of his keyboard, partly because you got to see what the rest of him looked like, and partly because I had him going on all sorts of adventures with my other Star Wars figures. On more than one occasion the Han Solo and The Millennium Falcon was hired to get Rebo and his band to their next gig and The Empire was determined to stop them because The Empire is evil and hates music. Amazingly enough, Rebo features the standard 5-points of articulation as most vintage Star Wars figures, although he’s definitely pre-posed with one thing in mind… jamming on that keyboard… or waving hello to people.

Speaking of the keyboard, it’s one of the coolest Star Wars figure accessories ever. I can’t believe all the work that Kenner put into this thing. There’s never been anything else quite like it and this one appears to be pretty damn close to the Kenner original right down to the individual keys that can actually be pressed in. I think the paint apps on this new one are better. I don’t remember the silver fringe being painted on the original toy, but then it’s been a long time since I owned one. 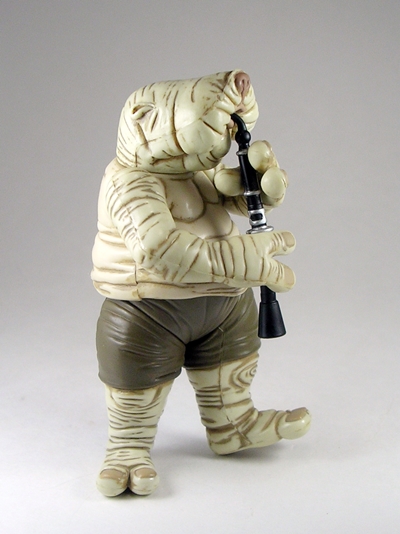 Moving on to Droopy McCool, this figure also strikes me as a nice compromise between the original Kenner release and something new and improved. He still features that same pre-pose mold for playing his chidinkalu horn. The horn is a removable accessory, but if you take it away from him, he just looks like he’s miming playing it, so there isn’t much point. I suppose you could put a rifle in his hands and make it look like he’s going to blow his own head off. Musicians sometimes do that. But that would be sad, let’s not do that to Droopy. 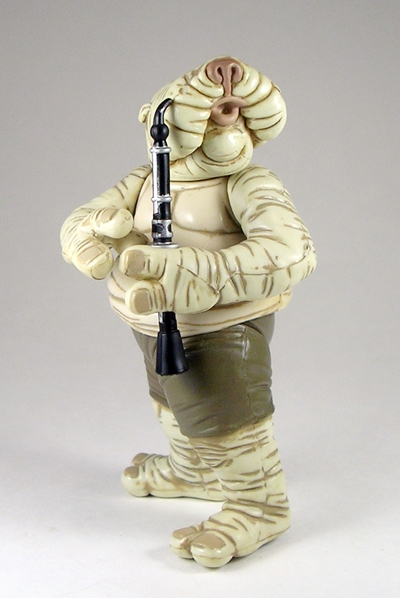 Despite the pre-pose, the figure also features a sixth point of articulation, which is a swivel in the waist. It comes in handy for putting him in a half turn, depending on which side of Rebo’s organ you want him standing on. The biggest departure from the original Kenner figure is Droopy’s rather heavy handed paint wash to bring out all the creases in his flesh. At first I wasn’t too keen on it, but it’s grown on me, even if it isn’t terribly screen accurate. 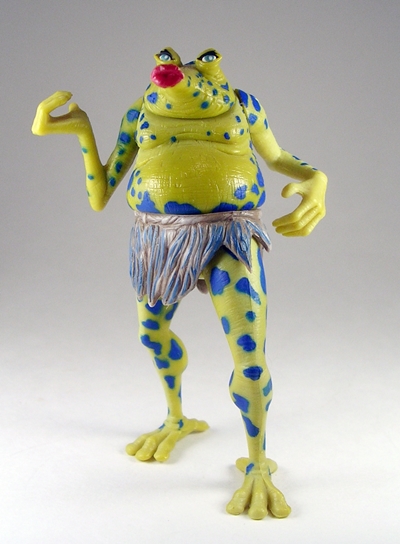 Last up is the lead vocalist Sy Snoodles. I like to think of her as the Debbie Harry of the Star Wars Universe. Her figure definitely got the biggest facelift from the original Kenner version and that results in some good and some bad. On the good side, her legs are more stable. I can still remember having trouble getting the Kenner figure to stand. This Sy has legit action figure legs and she stands just fine. Like Droopy, she also features the standard 5-points of articulation, plus an added waist swivel, which was a lot more than the original figure had. On the downside, she’s clearly based on the Special Edition CGI model, which gives her a more stylized and cartoony look and she’s also missing the feather from the original puppet. All in all, I still like the figure a lot, but the omission of her microphone really confuses me and pisses me off. And damn, those loose microphones go for crazy money on the Ebays. I really need someone to 3D print me one of those damn things. 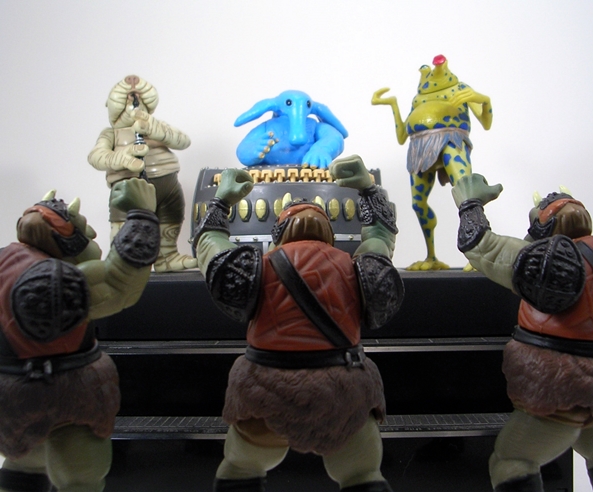 As far as action figures go, this is definitely an odd bunch. Clearly my love for this trio is fueled by nothing but hardcore nostalgia, but I don’t care because it’s so damn cool to have these characters in my collection again. The Rebo Band just may have been that first step where the Universe decided… Yup, every single damn character in the Star Wars movies is going ot get a figure. There was no turning back and that long journey has culminated in getting Bespin Ice Cream Maker Guy. But that’s a Feature for another day. A little while ago, I decided to start rebuilding my Jabba display with figures from all different series and this trio will certainly be a cornerstone of that display. The last release of Jabba and his throne is one of the few Star Wars figure sets that has been on display since the day I got it, and now I can finally start adding to it. Of course, it’s important to note that each of the Max Rebo band was bundled with one of the band’s extended members from the Special Edition and those are the figures that I’m going to look at tomorrow.