Today I’m going to wrap up the weekend with a look at Jabba’s Dancers, but before we get to the ladies, there’s one more Special Edition band member to cover… Introducing, Rappertunie on the growdi!

Unlike the rest of the figures in these features, Rappertunie was released later on in Hasbro’s Saga line and he was single carded with his instrument. While far more cartoony than Barquin and Doda, I still like this guy a lot. I think he fits the overall Star Wars creature aesthetic a lot more than Joh Yowza does. That may be because he was an actual puppet and not an awkward CGI model. At at a time when Hasbro was dishing out a lot of sub-par figures, this guy and his elaborate instrument felt like an amazing value. He’s also pretty benign to the whole “Jedi Rocks” scene. In fact, he’s probably the lowest profile member of the band. I’d say he needs a better agent, but his career was no doubt better off not being associated with that train wreck of a performance.

The figure features the standard 5-points of articulation, although Rappertunie is designed with pretty much one thing in mind and that’s sitting on his instrument and playing it. Unless you happen to have a 3 3/4’” scale bean bag chair and rack of ribs. You could probably make something happen with that. Hasbro went all out on this Rappertunie’s sculpt and the paintwork is superb as well. The instrument looks like a glorious kind of steampunk invention and there’s a detachable hose running from the instrument to the base. 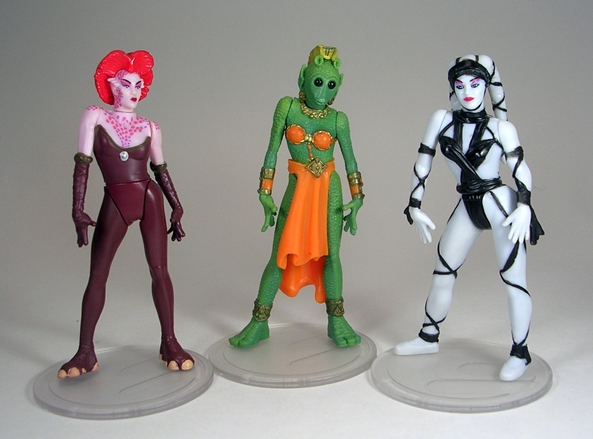 And now we can move on to the dancing girls: Rystall, Greeata, and Lyn Me. These ladies were released as part of the Power of the Force 2 line in what was commonly referred to as a Cinema Scene pack. It was window boxed with the three figures standing against an illustrated backdrop from the film. I loved these packs and I’ve owned probably three or four of this one over the years. It’s just one of those items that come and go out of my collection over and over again because it’s so damn common and cheap. Let’s look at them each in turn. 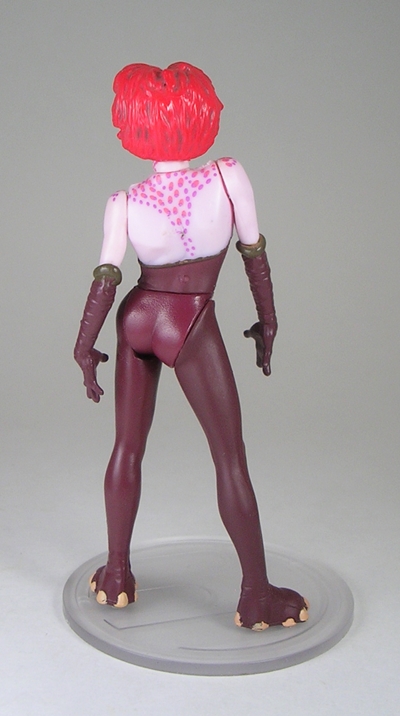 With bright red hair, purple spots, and elephant feet, Rystall is one crazy looking chick. Nonetheless, Rule 34 tells me that there is someone, somewhere whacking it to an image of her. And judging by the way Boba Fett was flirting with her in the movie, I’m guessing I just found that someone. Rystall features nice coloring and a decent sculpt. The spotting on her skin is neat and reminds me of the markings of a Trill. Wiki nonsense tells me that Rystall’s entire family was a slave owned by an official in the Black Sun organization until Lando set them free in a game of cards. Because no matter how big the Universe is and how insignificant the character, everyone in Star Wars has to be connected to another in some way, right?

Next up is Greeata, the Rodian dancer. She easily has the best and most complex sculpt of the three dancers. Not only did Hasbro give her a really cool head sculpt, but they textured her entire body with creepy Rodian skin. They also did a particularly nice job with her outfit, or at least what little there is of it. In addition to the sash and bikini top, you get her bracelets, anklets, and necklace all impressively recreated for a figure from this time. You also have to love that mohawk that runs all the way down her back. Having read her backstory, I’m genuinely surprised to find that Greeata was not Greedo’s sister. That sounds like something the Expanded Universe couldn’t help itself from doing. 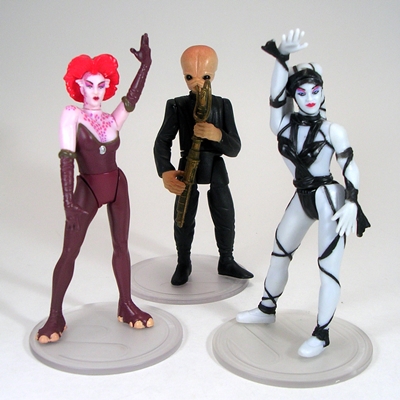 Last of is Lyn Me who is the Twi’lek. This figure should have been my favorite of the bunch, because I have a thing for Twi’lek slave dancers. See above Rule 34. Unfortunately, she comes out at the bottom of the trio for me. She looks rather stocky and it’s really hard to get her to stand without bending her over a bit. I appreciate that the wraps that make up her costume are all part of the sculpt, but the paint is a little sloppy. The head sculpt is Ok, but I think it could have been better. Lyn Me had some sort of crush on Boba Fett and followed him to Tatooine. I wonder what she thought of him macking on Rystall?

All in all, these dancers are pretty cool figures, although they’re fun factor is curtailed by the fact that their all a bit pre-posed. With their arms held straight and each one tossing their hip, there’s little you can do with them other than stand them in a line in your Jabba display in the manner in which they were packaged. Even the standard 5-points of articulation and added waist swivels don’t help that much. Still they serve as some decent window dressing.

Of course, even after three days and ten figures, I’m still not done yet. Jabba was quite the patron of the arts and there are more musicians to cover. Rest assured I’ll be revisiting this series in the future, as I’ve yet to touch on the percussion section of Jabba’s orchestra and I’ll probably throw in the POTF2 Oola for good measure. I should be getting a couple of boxes of my old stuff shipped from my brother in a few weeks that may or may not contain a cornucopia of Star Wars figures. It’ll be kind of nice to see more Star Wars features around here.