Some of you may know that I’ve spent 2014 building my team of Justice League ArtFX+ statues and that I’ve really been enjoying this line. I finished off that team last month, but I still plan on picking up some of the stand-alone DC statues here and there. Of course, that’s not good enough for Koto. They need all my monies and so they’ve embarked on assembling The Avengers in the same format. The Hulk was the first amazing release in this line and now I have the second release in hand… Black Widow! I’ve had this statue on my receivings pile for a couple of weeks now and I’m more than ready to get her open and check her out! 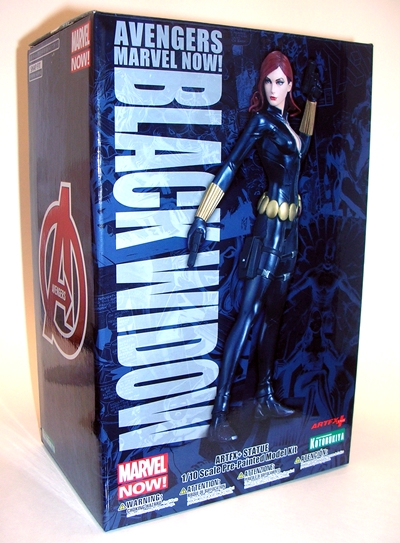 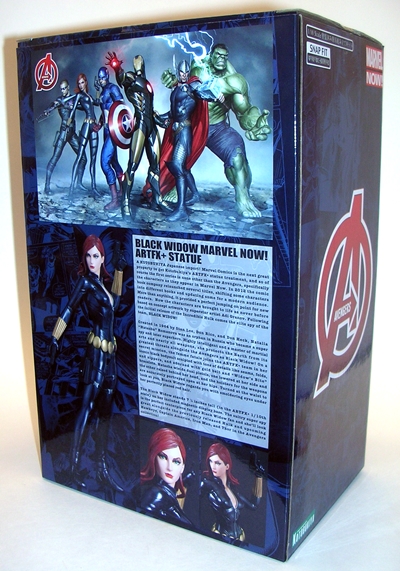 Widow comes in a standard fully enclosed box. While some have enjoyed the artsy-fartsy packaging used for the DC line, I’m actually quite pleased Koto has returned to the more serviceable and storage-friendly boxes. The deco is exciting and it gives you a good idea of what’s in store for you inside. The statue itself comes suspended between two plastic trays and requires some assembling. Widow is comprised of four pieces (top half, bottom half, and arms) plus her two pistols. The statue just takes a couple moments to put together and didn’t require any scary pressure or force to make everything fit nice and snug. 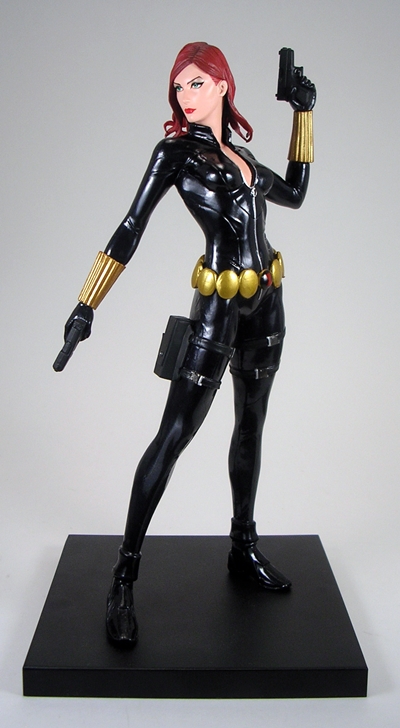 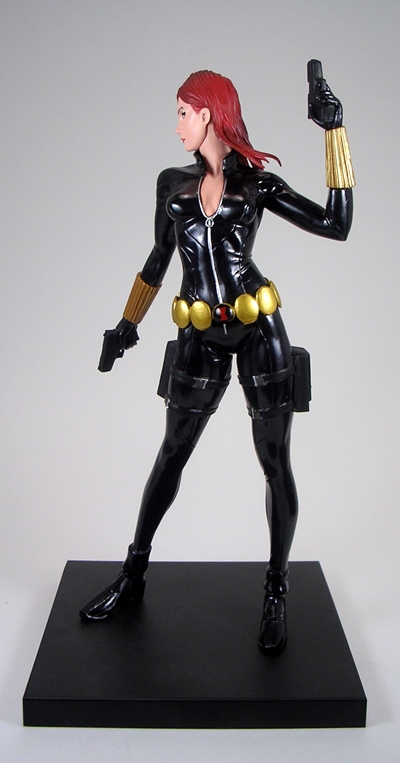 First off, I’ve got to say how happy I am that Koto is going for the current comic versions of these characters, and that’s doubly the case with Black Widow. Not that I have anything against Scarlet Johansson as the movie Widow, but I really dig the character’s more traditional comic look here and it’s refreshing to see it portrayed in this series. Natasha is donning her gold disc belt and gold bracers, two aspects of her comic costume that I’ve grown particularly fond of over the years. No detail has been missed from her low drawn zipper and pistol holsters to the Black Widow emblem on her belt buckle. The gloss used on Widow’s suit is subtle enough to set it apart from the highly metalized deco on the Justice League statues, but still bright enough to make it snap. It contrasts great with the more matte gold used on the belt and bracers. 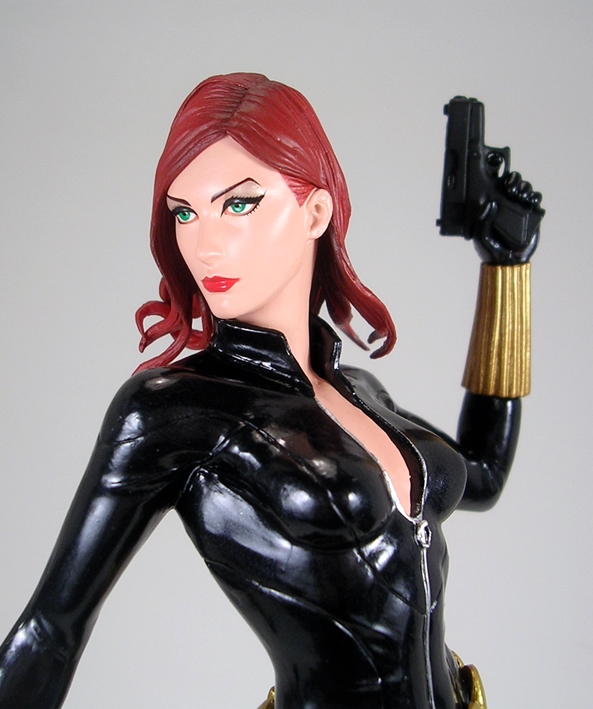 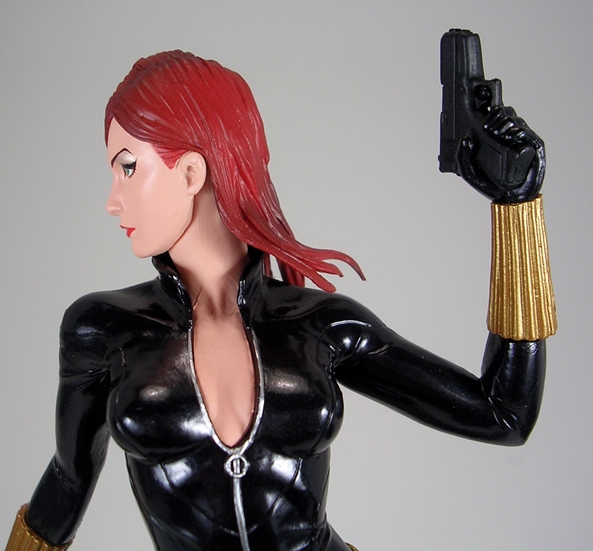 I honestly wasn’t expecting the portrait here to wow me as much as it did, but the pictures I’ve seen just didn’t do justice to Natasha’s gorgeous face in person.  Her eyes are beautifully shaped and rather hypnotic and the paintwork used for both her emerald eyes and her crimson lips is absolutely immaculate. Widow’s hair has a bit of flow to it, but they went for something a little tamer than we usually see on the Bishoujo statues and I think it works wonderfully here. 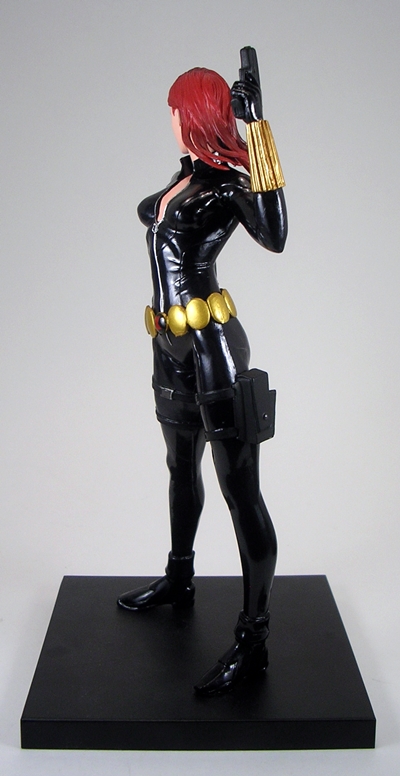 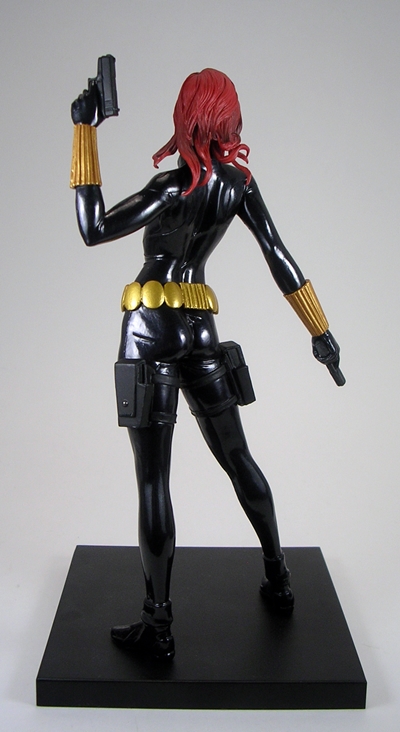 The composition of this piece is equal parts action and seduction. Natasha is poised with pistols ready and her hip thrown slightly to the side. I love it. The pose is designed to put her form slightly in profile with her face turned off to the side. Having the pistols as separate accessories was an interesting choice, as it seems totally unnecessary. Her hands are sculpted to hold them and so if you display her without the guns, she looks a bit weird. Plus, they can’t go into the holsters, so I’m not sure why you would want to take them out of her hands anyway. I’m not really complaining, just puzzled. 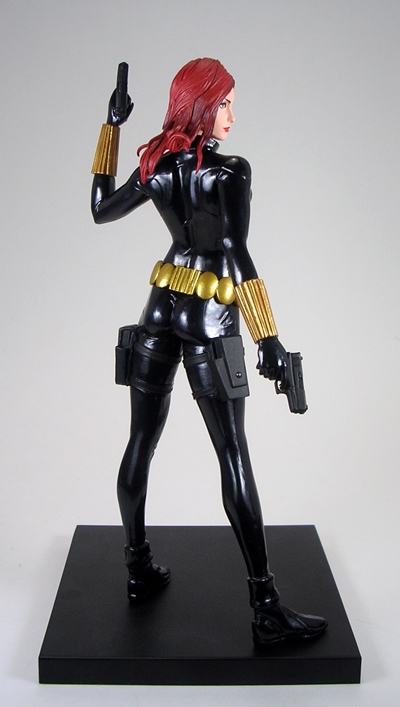 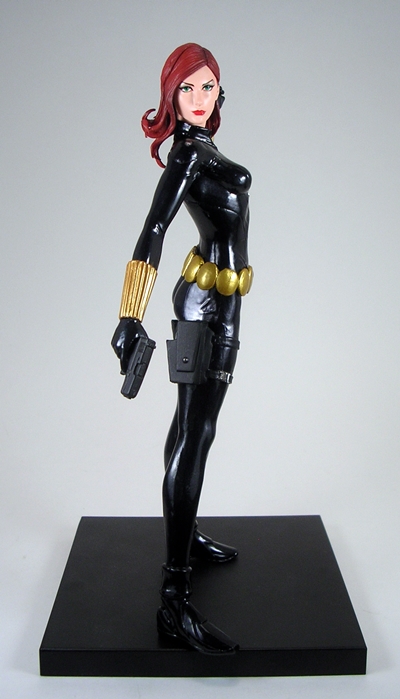 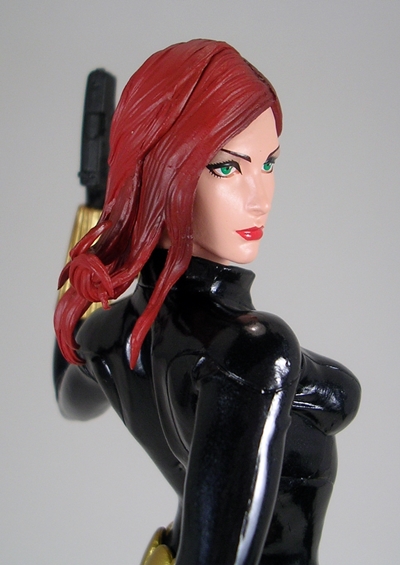 As with all of the ArtFX+ line, Black Widow features a metal base that works with the magnets in the statue’s feet to keep it secure for display. You can position her anywhere on the base you want and you can even have them straddle combined bases when displaying multiple statues. 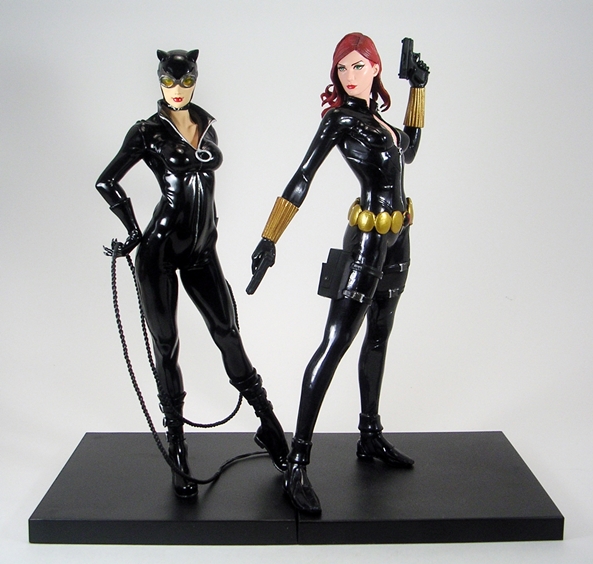 Widow set me back about $55. It’s fairly more than I was paying for the Justice League statues, but I still think it’s a pretty solid value. At 1/10th Scale, Widow is a bit bigger than your average Marvel Legends figure and thus offers a nice compromise between detail and economy of display. What’s more The Hulk looks absolutely…. Smashing… when displayed beside her and I have no doubt this team is going to look fantastic when they’re finally all assembled together. Ah, but even if you aren’t planning on collecting a whole set, I’d still recommend this one as a fetching stand-alone piece. She’s a red-head, she’s hot, and she’s wearing leather… what’s not to like?