I’ve still been on a bit of a Star Wars kick lately, which mostly amounts to me finally getting around to opening some of the figures in my receivings stack and getting them featured here on FFZ. A couple of years back Hasbro released some neat tributes to the old Kenner three-packs with modern figures in the old style Kenner packaging. Yup, it was pretty much an extension of the Vintage Collection. At one point Amazon was selling these sets for six bucks and I said, “why not? I like droids!” and I tacked it on to one of my orders.

Despite growing up during the heyday of the Kenner Star Wars Toy Age, I have no recollection of the original three-packs. I’ve seen them on collector sites and from time to time at Toy Shows, but I don’t think I ever saw these as a kid. Maybe I just wasn’t interested in them because I already had the figures. Anyway, the package consists of a vintage style Kenner card that sort of morphs into a window box at the bottom to display the three figures. It’s a great reproduction of the original package and deliciously nostalgic, but at the same time kind of bland because there’s very little artwork on the front. Nonetheless, it’s still plenty cool.

The back shows all three of these recreated sets that Hasbro produced. I can’t vouch for the “Villain Set” but I’ve seen lots of photos of Kenner’s original “Droid Set” and the “Android Set.” Wait, Android Set? It’s got Chewie, R2, and 3PO, how does that constitute an Android Set??? Oh, never mind. The set we’re looking at today contains R5-D4, Death Star Droid, and Power Droid, and that makes it a nice tight set focused on the Jawa droid sale on Tatooine. Sadly, the packaging is not collector friendly as the bubble is still glued to the backing, so you’re going to have to do some damage to get these droids free. 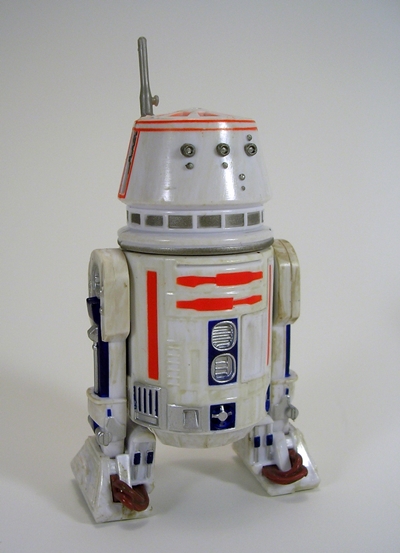 I’ll just take these figures in order going from left to right and that starts us off with R5-D4. The body of this mold has been around the block a couple times, starting out life as Vintage Collection R2-D2, and even this R5 is a straight repack of an earlier release, complete with the glued down front access door. Not that I’m complaining because I think this figure happens to be pretty great.

He features the usual removable third leg, which is how I think the Astromechs should always be done in this scale. Hasbro, I love ya, but cool it with the third leg that’s tied to the head rotation. Oh wait, there’s still a head turning gimmick… D’oh! In this case the head is tied to a second antenna that comes out of his head. It’s a pretty crappy gimmick because you have to have R5 turning his head all the way over his shoulder to get it to stick up. Always with the head turning gimmicks, Hasbro, enough is enough, eh? Actually, I take that back. Give me an R5 figure that actually blows his top. That would be cool. 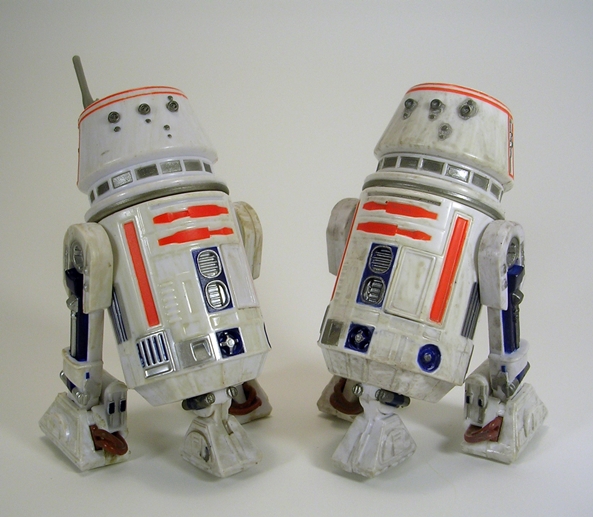 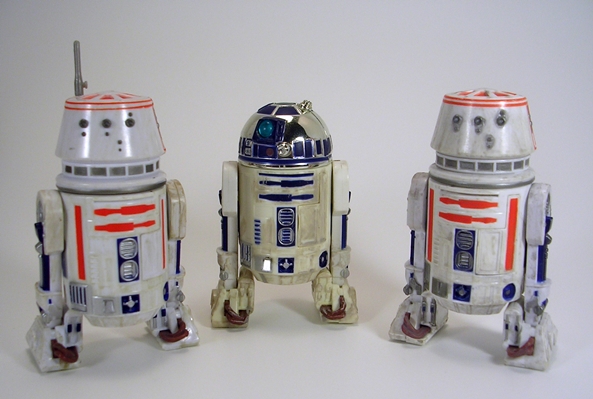 The only discernable difference between this R5 and the previous release in my collection (other than the missing antenna) is the paint. This new release is much cleaner, particularly on the head and it doesn’t have the extra silver paint slop around the eyes. I’m not usually a fan of Hasbro’s attempts to dirty things up with paint, but in this case I actually like the weathered one better. Either way, this R5 is still a great figure and I’m glad to get another one. 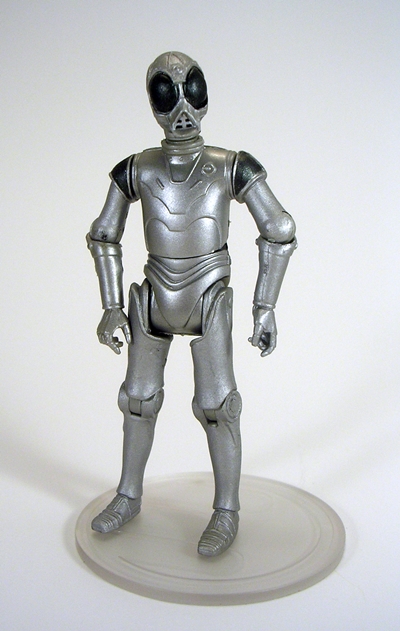 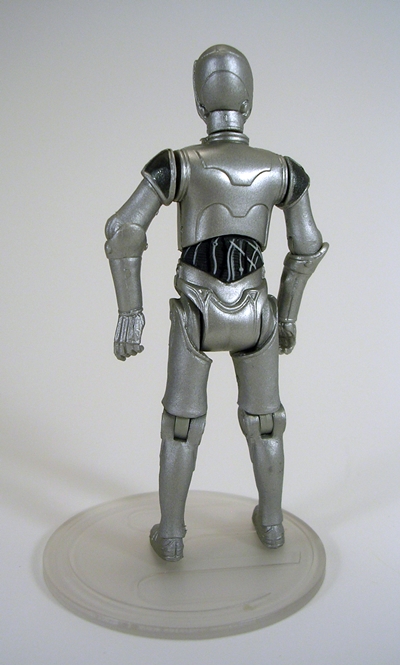 Next up, we’ve got Death Star Droid, also known as RA-7. For some crazy reason I was obsessed with the original Kenner Death Star Droid as a kid. I used to pair him up with R5 and they used to be the Imperial versions of R2 and 3PO and show up in all my stupid adventures. Old habits are hard to kick, and since then I’ve always tried to get whatever figures Hasbro made of this guy. After my Great Star Wars Purge, I only have two RA-7’s left, I thought this one would be another repaint of them, but not so! It’s a completely different figure.

Yeah! Gotta love that funky purple RA-7. He’s from the Marvel Comic Pack with everybody’s favorite comic, The Jawas of Doom! But that’s a feature for another time. The biggest giveaway is this new figure’s enormous head, which I’m not all that keen on. I don’t know if it’s really more screen accurate or not, but it looks kind of ridiculous next to the other two Death Star droids with the more sensibly sized noggins. 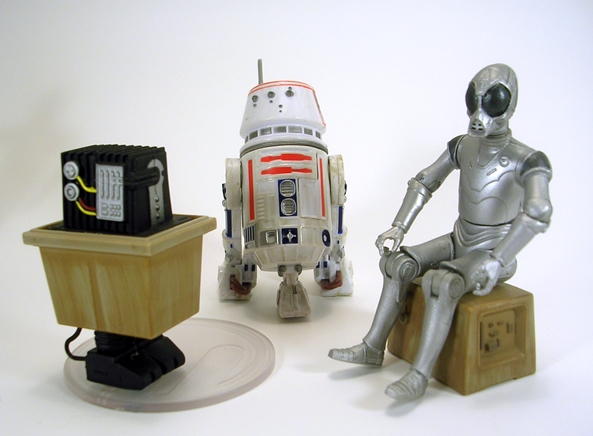 The other big giveaway is all the extra articulation. My other RA-7’s only have the five basic points plus swivels in their waists. This guy has ball jointed elbows, hinged knees, and a ball joint in the torso. Honestly, the added elbow articulation doesn’t really do much to enhance the figure, but at least with the knees he can sit down and take a load off. I’m pretty sure he was sitting down in the Sandcrawler, so that’s a big win to anyone looking to recreate that scene. Oh, and then there’s this… 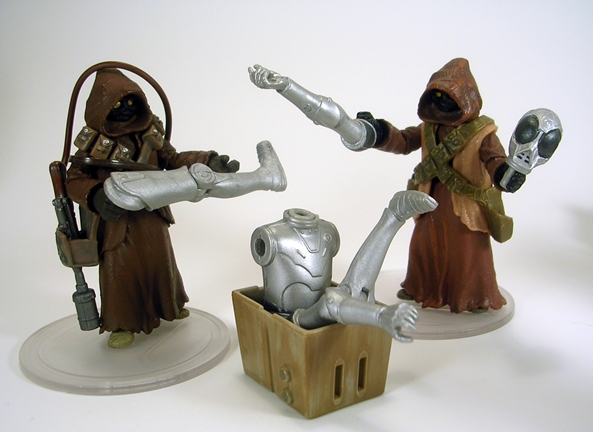 Yeah, he just pulls apart, which leads me to believe this figure is just a bunch of repainted Build-A-Droid parts. The new grey paintjob is pretty good and it makes him stand out among his two brothers. While he’s not quite the same without that bitchin’ chrome finish from the original Kenner figure, I still like this figure a whole lot. That’s OK, he’s still cool enough. And now I have a Death Star droid that can get blasted into a million pieces.

And last up is the Power Droid. Now, I know what you’re thinking. Oh, crap… not another one of these stupid boxes on legs. Yeah, I have a couple of these Gonk Droids, so I wasn’t expecting much either. But it turns out this one is the only completely new figure in the set, or at least I’ve never seen him before. He’s a nice surprise because he looks pretty screen accurate and he doesn’t have any kind of stupid walking gimmick like previous releases. In fact, his legs just have regular hinges at the tops and at the ankles. I really dig the paint wash on him too. And then there’s this little surprise…

Yeah, I already spoiled it in the earlier pictures, but it sure surprised the heck out of me. You can lift off the top and reveal his smooth and creamy caramel droid center. Actually he’s just full of droid parts. There’s some extra paint hits in there, but that’s a bout it. Ok, so after all the fuss, he really is just a box on feet and there’s not a lot else to say about this guy. But I still love him, dammit!

I’m pretty sure these sets were originally Target Exclusives. That’s the only store I ever recall seeing them in and boy were they clogging the pegs for a long time. I remember scoffing at the original MSRP that put them at about $25 and they hung around the clearance endcaps for a while too. Yeah, for three figures, twenty-five bucks really isn’t that bad, and I wasn’t buying Star Wars at the time anyway, so it’s not like I was the intended audience for something like this. Somewhere along the way Amazon must have nabbed a ton of these because they still have them on sale. They’re not six bucks anymore, but they’re only ten, and at two-fitty a figure, that’s still a nice deal. Now I just wish I had forked up the money for that Original Trilogy Collection Sandcrawler so I can fill it up with all these nifty droids.