It’s Thursday and around these parts that means Transformers! As much as I’ve enjoyed my tour of the Generations Legends Class line for the past month and a half, I’ve sadly run out of figures. I am, however, still on the hunt, so I’ll be circling back around to it eventually. For the time being, I’ll be turning my optical receptors back to some unfinished business in the Classics and Universe 2.0 lineup. I was surprised to find that the figure I’m looking at today has escaped my feature spotlight these last four years and now that I’m doing it, I think that might have been an intentional oversight. Nonetheless, I’d say it’s long past time to dust off Classics Megatron and give him his due. Naturally, the packaging for this guy is long gone, so we’re going to jump straight in and look at his alt mode. 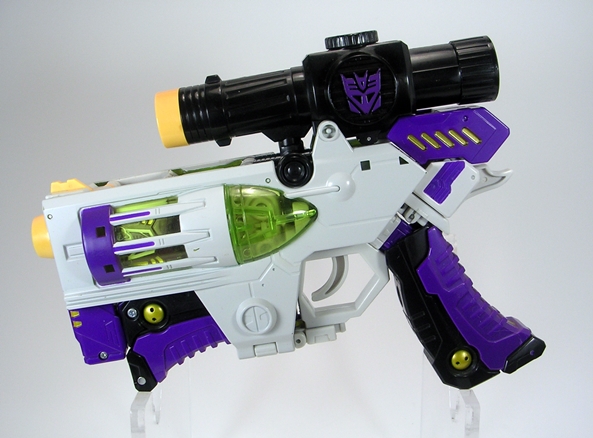 At the time, I don’t think anyone could have predicted that Megsy would be appearing in the Classics line as a gun and yet here he is. Sort of. He’s definitely a pistol, but Hasbro had to use their creative license to give us a design far from anything realistic. And so we wound up with what is often the bane of most nerds and fanboys… the dreaded compromise! Yes, Megatron is a gun again, and no he’s not a Walther P38 or even anything resembling any kind of real world firearm. Instead, what we got is something that resembles, more than anything else, some kind of Nerf blaster. Now, I can appreciate going for a sci-fi style weapon and I think the concept could have worked, if only the end result looked better than what we got.

About the only thing here vaguely reminiscent of Megsy’s old gun mode is the scope and the trigger. There’s a chamber, which vaguely resembles some kind of revolver and I’ll never understand the ridiculousness of having to put an orange plug on the end of a barrel of a toy gun with a design like this. Thank god for that plug in the barrel or kids would be holding up 7-11’s with old Megatron left and right. Yeah, it only adds to everything else that is unfortunate and wrong about this gun mode. I’ll also throw in the fact that the handle grip is way too small, not only for an adult hand but to look proportionally correct with the rest of the gun. It’s perhaps worth noting that you can pull the trigger and it clicks and you can actually look through the scope, but none of those “features” help to sell this alt mode to me. In fact, Classics Megatron would have to have one hell of an amazing robot mode to make up for this. 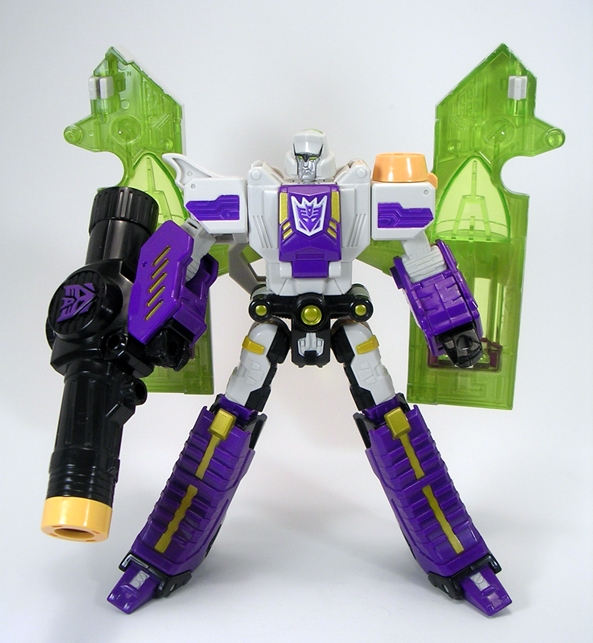 And sadly that he does not. What he does have is a fascinating transformation that at least has me respecting and admiring what Hasbro tried to do here. I’ll even go so far as to say that there are a number of things that I do like about this robot mode. The contours of the legs are nice and while only one of them form the grip for the gun, they are symmetrical to look like they might have split apart during transformation like the G1 toy. The way the scope becomes his fusion cannon is also spot on fabulous, even if it does have a hideous orange plug on the end. Wait… why does the toy need an orange plug on the end of the SCOPE? 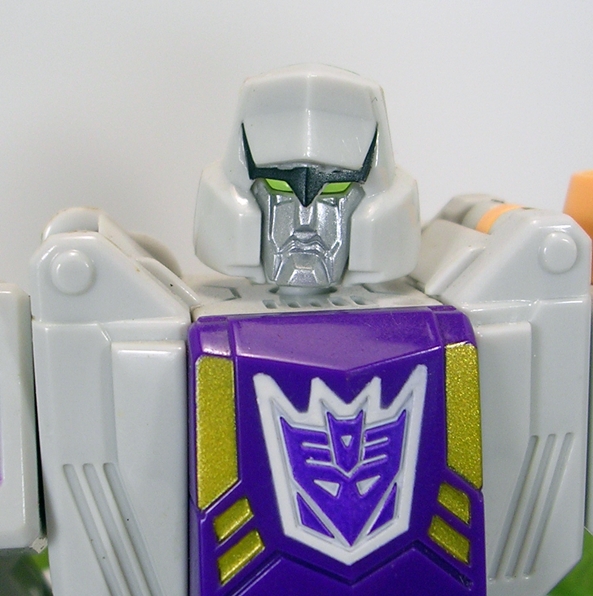 The head sculpt is also pretty damn good. The shape of the helmet is very reminiscent of the G1 Sunbow look and while Hasbro has taken some liberties here with the face, I still like it a lot. The lightpiping effect in the eyes is also excellent, even if green was a strange choice to go with.

Unfortunately, just about everything else about this guy feels wrong to me. There’s nothing in the chest that nods back to the old days. Remember, this is the Classics line, Hasbro, give me something else to work with here. Also the asymmetry of the shoulders really bugs me, especially since the left one displays that ugly orange plug. And I’ve obviously saved the biggest gripe for last because those giant wings that form the two half shells of the gun mode are just a shame.

The coloring here is also really inappropriate. I’m normally a big fan of purple in my Decepticon decos, but when you mix it with the neon green and orange, it just doesn’t work for a Classics style Megatron. The coloring on the Japanese Henkei version goes a long way to save this toy and I’d dare say that had Hasbro used that deco I would have been a lot more forgiving about the rest of this figure. For a while I considered picking up that version, but then I didn’t really want to invest more money in this mold.

And so I’m left with a real love-hate relationship toward this figure. I appreciate what Hasbro tried to do here and I understand that they had some unreasonable limitations working against them vis-a-vis the alt mode. Plus, I can’t deny that I’m able to pick up this figure and have some fun with him. He can still strike some pretty cool poses. On the other hand, there are just so many unfortunate design elements here that make him fail as a Classics style Megatron. And the fact that it is a character as important as Megatron makes that fail all the more epic. Ever since this guy was released, I’ve been on the hunt for another version of the character to stand in for my Classics Megatron, and the search still goes on. My War For Cybertron Megsy comes close, but then he doesn’t scale with Classics Prime. I’m anxious to see how Hasbro’s upcoming Generations Megatron turns out. Even if he isn’t a gun, I think the robot mode on that big guy has a lot of potential. Of course, I’ll still have that scale problem.