I started out this week looking at the Star Wars Black 6-inch Clone Trooper and I wasn’t all that impressed with him. That’s unfortunate because apart from the extra Stormtrooper, that was the figure I was most looking forward to getting. The only other new figure in the wave is Anakin and the only reason I own him is because I bought the whole case and he tagged along for the ride. This guy has a couple of strikes against him from the get-go. One, he’s a Prequel figure, which aside from the Clones and maybe Jango Fett, I’m not actively collecting. Two, I expected him to heavily reycle parts from the Prequel Obi-Wan, another figure that I was not at all impressed with. I know, we’re off to a bad start here, so let’s take the high ground (so stupid) and just jump in and get this over with.

I’ve got nothing new to say about the packaging. It looks good and does a great job of showing off the figure and his extras. I love the way the lightsaber and extra head just seem to hover there in the package. Anyway, this should be the last time we see this box deco before the redesign in the next wave. Anakin comes with two portraits, so we’ll start off with the noggin he comes with out of the box.

I already said that I was expecting a nearly straight repaint of the Obi-Wan figure and that’s not at all what we got so kudos to Hasbro on that. In fact, I’m really impressed that Hasbro practically did an entirely new sculpt for the Anakin body. Sure, there’s obvious differences, like the bracer on his right forearm, the belt, and the boots, but even the areas on the robes where shared parts would have been sensible have different texturing and fold patterns. After having scrutinized both figures side by side I’m still having a problem finding anything that’s directly recycled without some tweaking. There are also some cool and more subtle differences like the way Anakin’s shoulders crest upward a bit at the ends. I had some issues with the Obi-Wan body feeling a bit too bulky, but I don’t find the same issue here, but I think that’s mostly because Anakin had a bigger build. 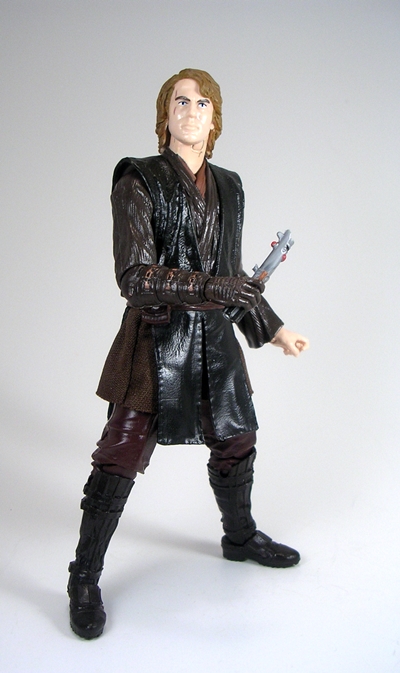 The figure comes boxed with his regular head, which I think is a passable enough likeness. It’s certainly about on par with the Lukes and Han from past waves and I’d argue it’s better than the Obi-Wan portrait. I think my only gripe here is that since they included his “evil” Darth Vader head, they might have gone for a less angry looking expression for his normal noggin. The most notable difference in the Vader head is that the messier hair and the eyes, which are painted red. It feels like it needed a little something more to make it stand out. Maybe a paint wash or some dark circles under the eyes would have helped. Still, all in all it’s not bad. 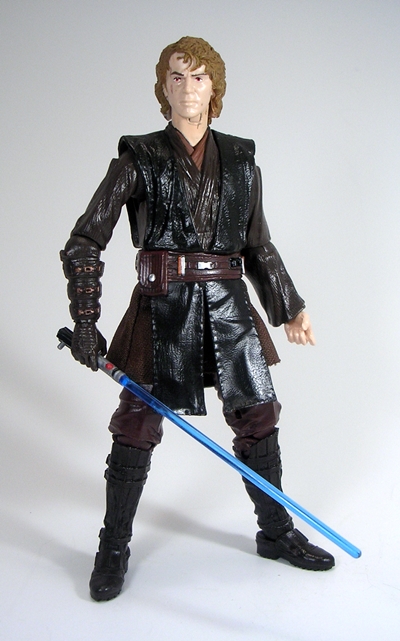 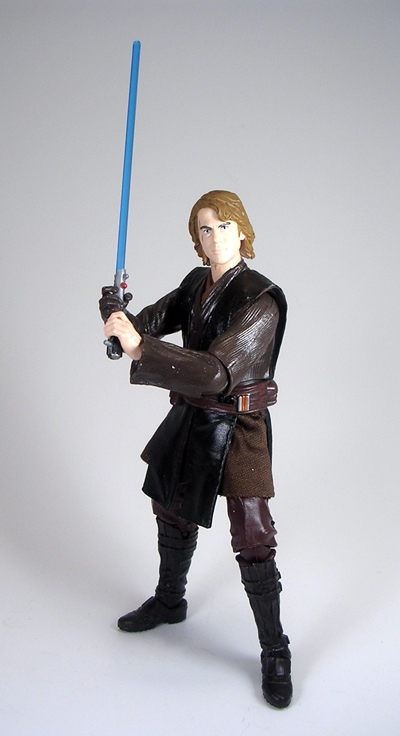 Articulation here is pretty much the same as we saw with Obi-Wan. You get a limited ball joint in the waist and the neck features both a ball joint and hinge. The arms have rotating hinges in the shoulders, elbows, and wrists. The legs are ball jointed at the hips, double hinged at the knees, and the ankles feature both ball joints and lateral rockers. 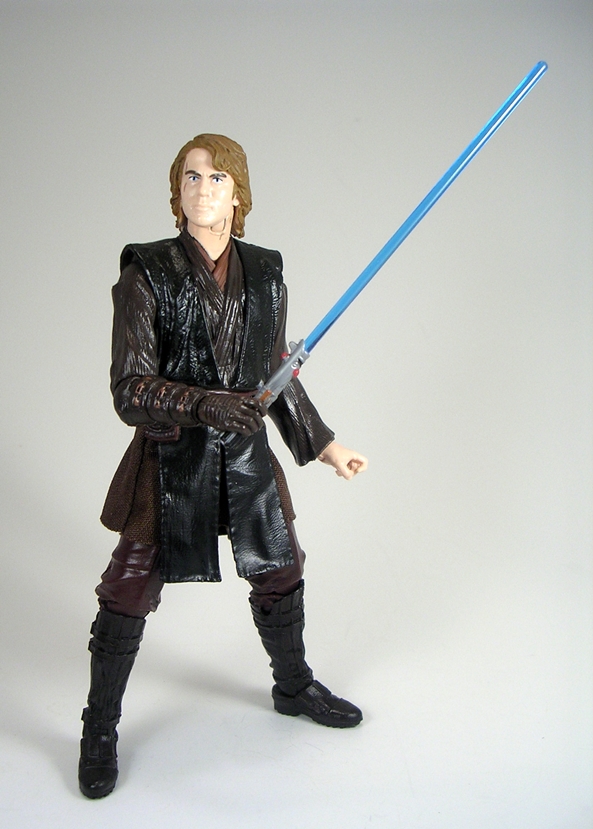 As with Obi-Wan, Anakin comes with his trusty lightsaber with a detachable blue blade. The blade is a deeper blue than Obi-Wan’s and it’s also a bit thicker. The hilt is nicely detailed and painted and it’s also pegged so that it can be attached to the belt. 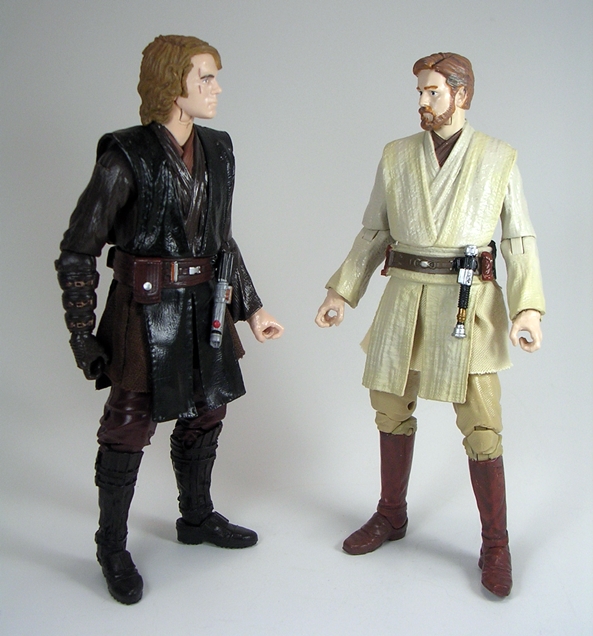 I was originally planning on unloading this figure, along with Obi-Wan to a more prequel minded collector, but much to my own surprise, I liked Anakin enough to convince me to keep him and Obi-Wan both. I can’t say as he’s all that much better than some of the 3 3/4″ treatments, so he still fails the “is the new scale living up to its full potential” test, but he still turned out much better than I expected. I think the plastic sculpted robes look better on him than on Obi-Wan and I really appreciate all the effort Hasbro made to make him a unique sculpt when they could have easily just recycled the Obi-Wan body. On the whole, I think the 6-inch Black series is still a win, but this most recent wave has really shaken my confidence, especially since the best two figures in it are from previous waves. But, we have a new assortment due to ship soon, so hopefully Hasbro can restore this line to a more solid footing.