Until some new Generations start showing up in my area I’m going to continue to spend Thursdays looking backward through the Classics/Universe 2.0 line. Today’s random grab off of my shelf is none other than that sexy red Lamborghini Sideswipe. I haven’t really looked at this figure since Sideswipe got the Masterpiece treatment so it should be interesting to see if this toy still holds up. As is often the case with these older figures, I’ve got no in-package shot, so let’s jump straight to his alt mode. 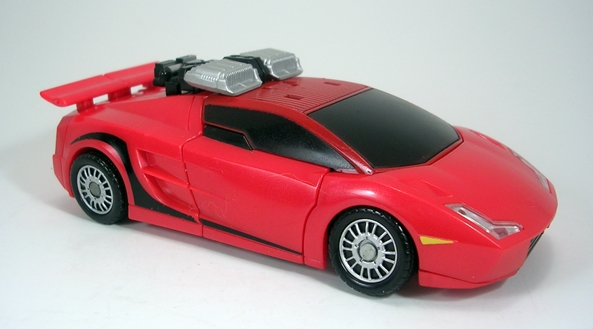 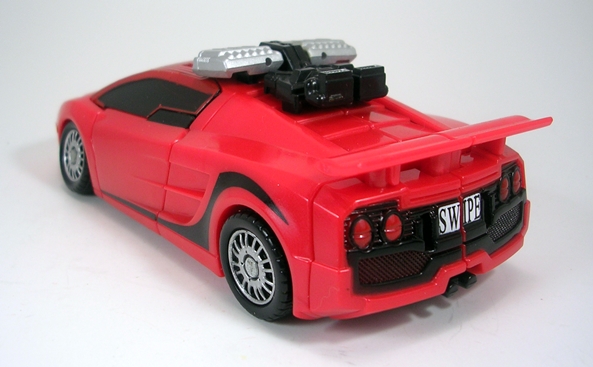 After being revamped for the Bay movies as a silver Corvette it’s nice to see him in his original red Lamborghini mode again. I can’t remember whether or not Hasbro actually got the license and my knowledge of Lamborghini models isn’t intimate enough to tell whether or not this is the real deal, but it sure looks close enough for me. Not only does Sideswipe’s alt mode look great, it’s impressive how few seam lines it has. Apart from what you would normally find on the doors, there’s just a single seam running down the back. Not too shabby at all! 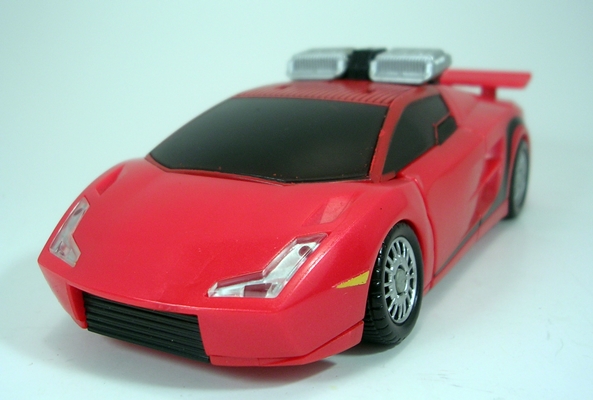 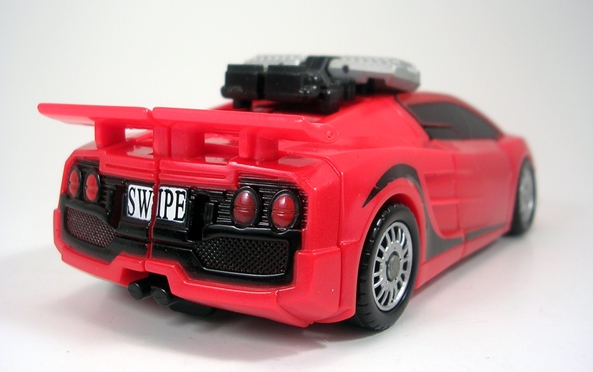 The alt mode does not feature a whole lot of paintwork, but the economy of colors works fine. The bulk of the car is molded in a pleasing red with just a few areas where you can see some swirly patterns in the plastic. You get some red stripes on the sides, a few yellow paint hits near the front and painted black windows. The rear of the car is painted black and you get a customized license plat that reads, “SWIPE!” The entire package is rounded out by some nice looking silver wheels, clear plastic headlamps, and a removable engine pegged into the top. All in all, this car mode looks great and locks together beautifully. I’d say it holds up wonderfully. The only thing I think he’s missing is a nice big Autobot insignia centered on the hood. 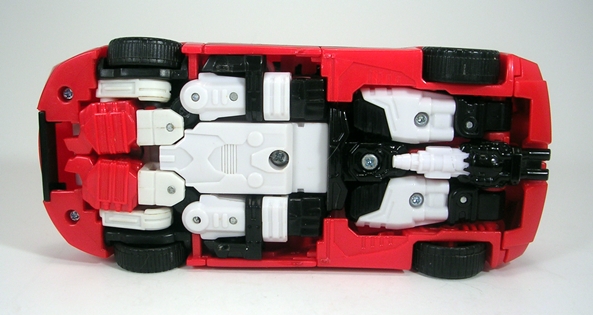 And just for the hell of it, here’s a peek at the undercarriage. Look at that! That is one well-packed Transformer. It also gives plenty of clearance for rolling the car and it even includes storage for the gun! 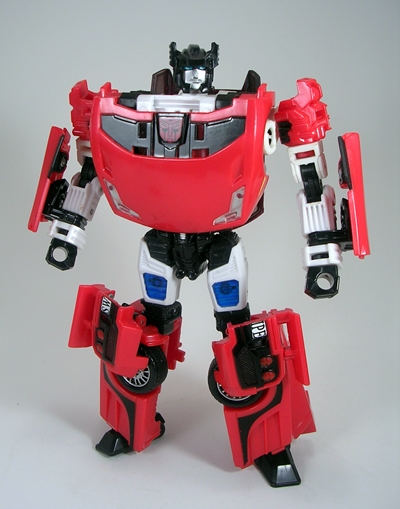 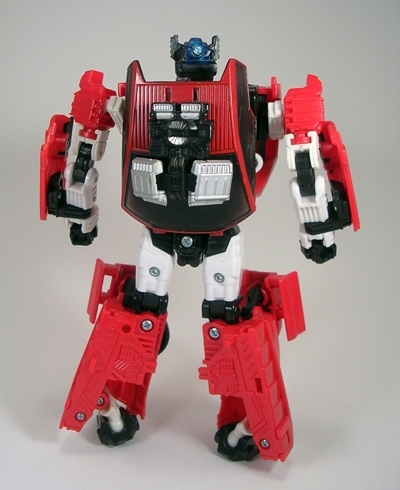 In his robot mode, Sideswipe represents the same mix of original design influenced by the character’s G1 roots that characterizes the rest of the Classics/Universe 2.0 line. I gotta say, I’m still digging it as much as when I first got him. You get the same folded down hood as a chest as his original toy and the Autobot insignia finally makes its appearance. The biggest departure on this design comes in his lower legs where the rear bumper splits apart to become his knees. It’s not as streamlined as his original design, but I still think it works pretty well. My only complaint here is that I wish those two bumper pieces actually tabbed into place somehow. All in all, I get a strong Alternators vibe from this robot mode, and that ain’t a bad thing at all! 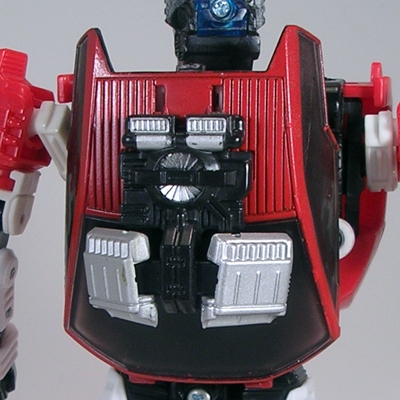 The engine piece reattaches to his back to form a sort of jetpack, which is certainly a nice touch although it’s also completely optional if you want to leave it off. 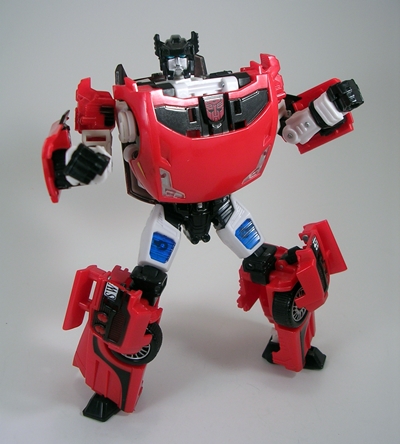 The deco here is gorgeous. Sideswipe retains a lot of his red and black motif, but you also get the addition of white for his arms, upper legs, an upper chest. The design also adds to brilliant pieces of transparent blue plastic to his thighs which goes a long way to make the figure’s colors pop. 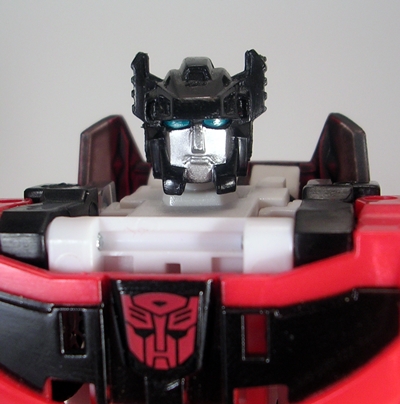 The Classics and Universe 2.0 lines rarely disappoints when it comes to the G1 inspired head sculpts and Sideswipe here is no exception. The portrait here is absolutely brillaint from his horned helmet to his neatly painted silver face. The blue light piping effect in the eyes is also highly effective and absolutely gorgeous. 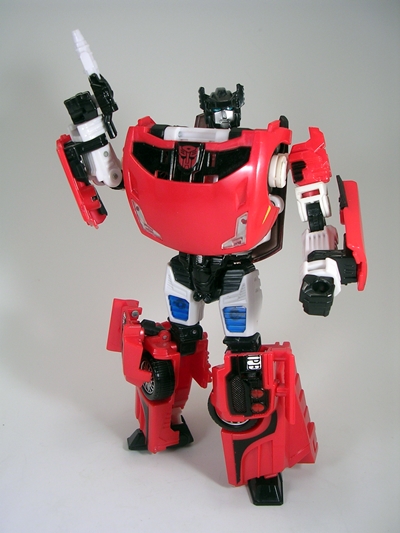 Sadly, Sideswipe does not come with his shoulder mounted missile launcher, despite the fact that there are clearly peg holes to accommodate such a weapon. He does, however, come with a very nice pistol that doubles as his exhaust pipes when in auto mode. 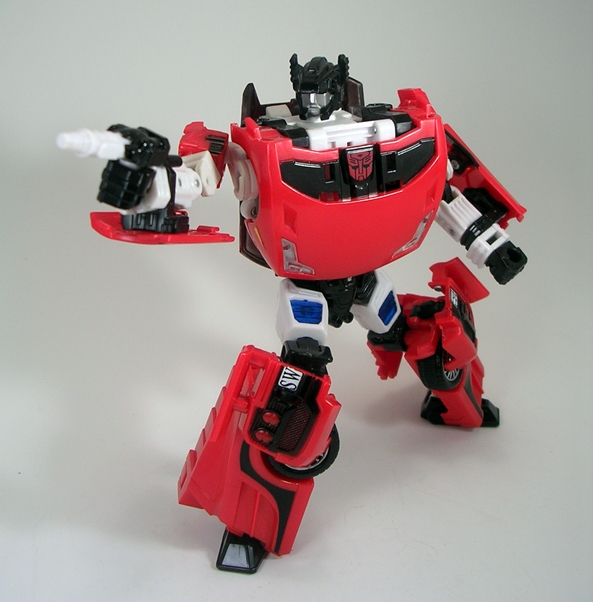 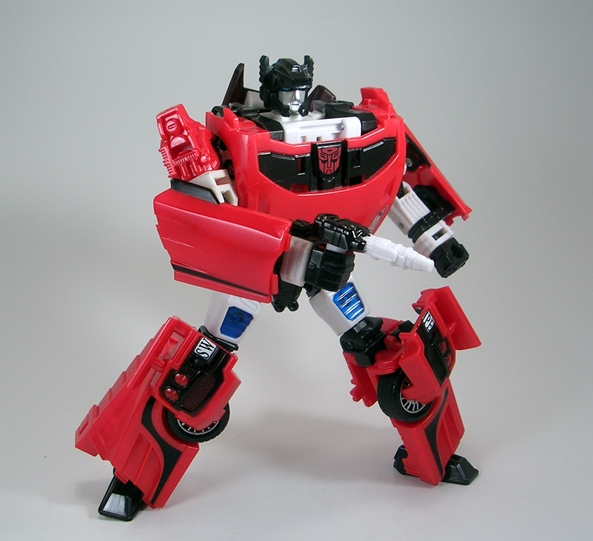 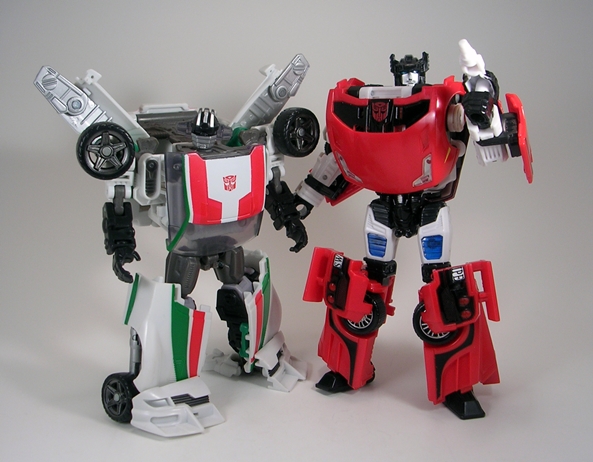 I absolutely loved this figure when it first came out and even after Sideswipe’s Masterpiece treatment, I still love this figure today. Hasbro delivered with a beautiful auto mode and a kick-ass robot mode. The engineering at work here is inspired and he’s an extremely fun figure to play around with. The other really cool thing about this figure is that it’s one of the first instances that I can remember where Hasbro designed a mold that would accommodate independent engineering and work as a separate character. In this case, that character is the other half of the Lambor brothers, Sunstreaker, and we’ll go ahead and check out that figure next Thursday!