Alrighty, I’m back to wrap up this slightly truncated week with a double dip into the world of Masters of the Universe Classics. I’m still not feeling 100% but I’m propped up on various cold meds, so please bear with me. On Tuesday we looked at Faker, this time we’re looking at one of the two August Club Eternia figures and it is none other than New Adventures Skeletor. I hear tell that some of the purist fans out there are rather perturbed that the NA characters have wormed their way into this line, but I’ve found these NA figures to be a delight and I’ll tell you right now that this new version of Skeletor is no different.

There’s the packaging. About the only thing new and noteworthy here is that Skeletor does indeed sport the “Space Mutants” sticker on the front of the bubble. He fills out the package rather nicely and his huge staff is packed in behind him. Also concealed behind the bubble insert is the bonus Faker head which we’ll get to at the end. The bubble insert simply identifies him as Skeletor, rather than “New Adventures” Skeletor, but it does feature the tag line, “Intergalactic Overlord of Evil.” I like to picture a scenerio where Skeletor gets his ass beaten down by He-Man and he just tosses down his Havoc Staff and shouts, “F’ck this place! I’m going to go conquer the Universe!” and then jumps in a rocket and flies off. Well, that’s how it should have happened. 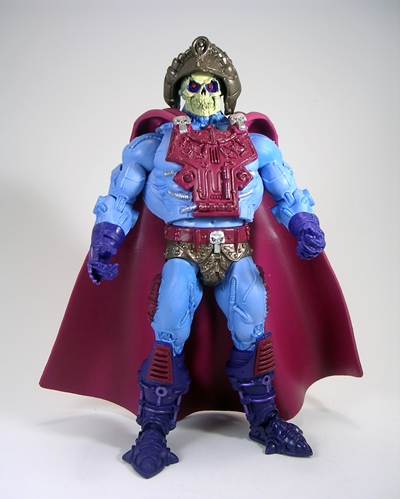 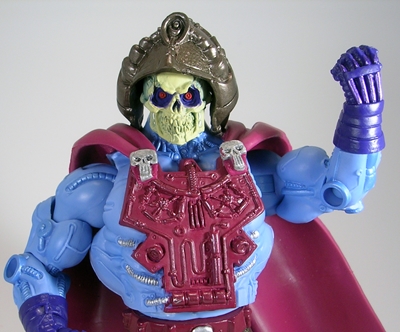 Out of the package and I’m really digging the look of this version of old Boney. From what little I remember about theNA characters, I recall them being a lot leaner, so this is the first time for me seeing this Skeletor all bulked out in the old fashioned MOTU style and I think it works beautifully. It also feels like Matty took some liberties with the coloring over the animated look. The deco here is fairly close to the Skeletor we all know and love, but his armor is now detailed with a cool technology and bone motif. That’s the one thing that sets this figure apart so much for me. A lot of the MOTUC figures get by with a fairly sparse amount of detailing, but there’s some extremely intricate and fine detailing on Skeletor’s armor pieces and even on the figure buck itself. Check out all those hoses  hoses and cables that appear to be grafted directly into his skin! Cool! 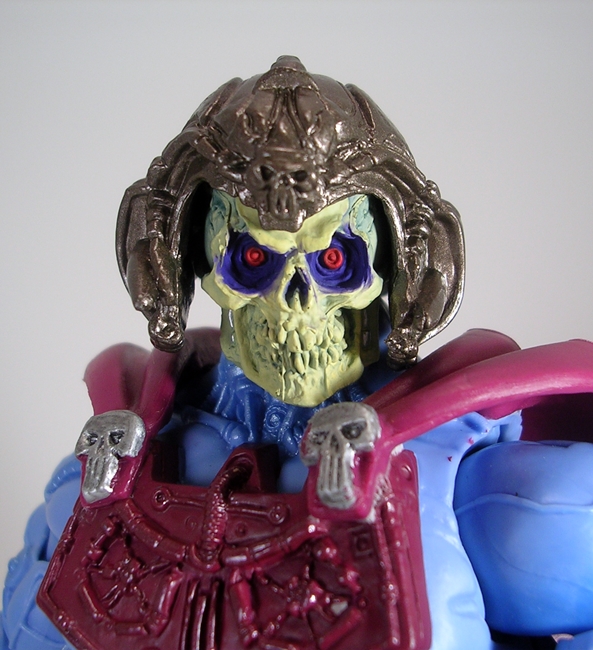 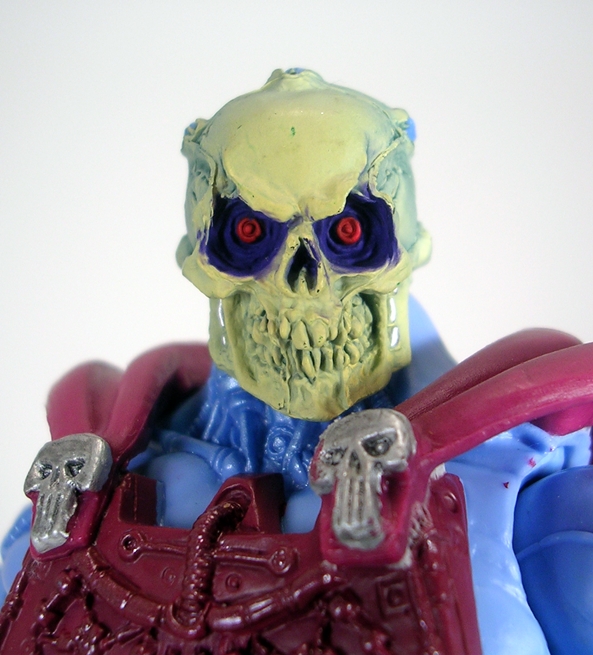 The portrait is equally impressive. The skull is really gnarly and features some fine detailing in the teeth. You can take off the helmet (which was a pleasant surprise!) to reveal even more detail, including cracks in the skull and tiny mechanical details like metal hydraulics in the jaw. And let’s not forget the eyes. Thankfully, Matty didn’t go for the bug-eyed animated look and instead just gave him a pair of red eyes set deep into the sockets. I think the only complaint some might have here is that Skeletor’s head looks a bit like it’s made out of clay. I’m not sure it that’s from the paint or the way it’s sculpted, but I’m getting a definite sculpty vibe from him. I think it’s rather distinctive, but some may disagree. 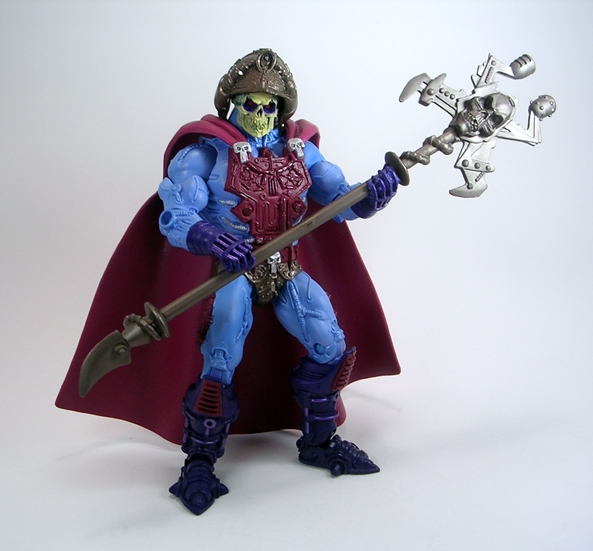 Skeletor comes with a large staff with a skull motif on the head and what I assume are two beam emitters. The butt of the staff ends in a hooked blade. It’s quite a departure from his iconic Havoc Staff, but I do rather like it a lot and he looks great holding it. And then there’s the other accessory…

The other accessory is the extra Faker head and holy shit do I love this thing! Obviously, it has nothing to do with the Skeletor figure, but Mattel said they would be trying to get extras into the hands of collectors by packing them in with random figures and this is one of those instances. This extra head is obviously a Terminator inspired portrait with half of Faker’s face blown away to reveal the metal endoskeleton underneath. It’s an absolutely beautiful sculpt with a fantastic paint job to back it up. The silver skull contrasts nicely against the blue skin of the face and I love the way the sculpted hair hangs down over the skull portion. The eyes line up perfectly and I’d dare say the paint is very near perfect.

I’m definitely going to be using this piece for my Faker’s regular display head.

New Adventures Skeletor is another one of those figures that I wasn’t all that excited about getting, but still wound up winning me over in the end. The intricate sculpting sets him apart from the regular MOTUC figures and it’s clear that Matty went above and beyond when designing and executing him. The removable helmet was a great surprise and the extra head for Faker made a great package all the better. Now I’ve got to start hunting down some of the Space Mutants that I missed to get this Skeletor a more suitable army of assholes, not to mention a New Adventures He-Man to fight them!

One comment on “Masters of the Universe Classics: New Adventures Skeletor by Mattel”