For a line that’s been canceled, Character Options’ 5-inch Doctor Who figures keep limping along thanks to a handful of special releases like the one I’m looking at today. CO seems to be empathizing enough with the fans to be releasing some of the staple characters for our 5-inch scale collections and in this case, they are delivering on filling that one big hole… Oswin “Clara” Oswald. Sure there are still a lot of 11th Doctor Era figures we’d like to see in this scale (Series 7 Cyberman, please!), but since the line went the 3 3/4” route during the 11th Doctor’s tenure, it seemed like Clara was that one character missing from an otherwise clean break. And that brings me to this “Impossible Set” which gives us The 11th Doctor from the story, “The Snowmen” and Oswin Oswald from Jenna Coleman’s first appearance in “Asylum of the Daleks” 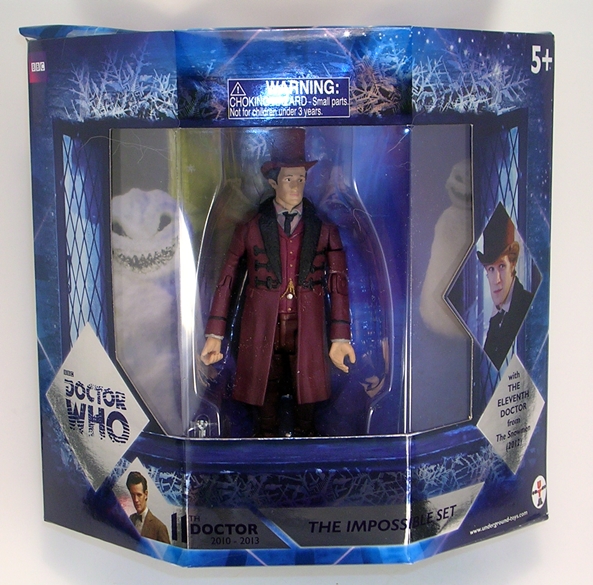 Character Options put together a really nice bit of presentation for this set, making me think it might have been originally intended as a special SDCC release. It’s a double sided window box with a hexagonal cross-section. You get The Doctor on one side and Oswin on the other. Each side of the package is decked out to represent each respective story. The Doctor’s side has some Victorian shutters and one of the Great Intelligence’s evil snowmen. Toss in some nice shiny foil and damn it looks great!

The flipside, however, is even better as it’s made up to look like the head of a Dalek with the eyestalk forming the portal to view the figure through. The presentation here is obviously a spoiler as it was eventually revealed that Oswin had been converted into a Dalek a long time ago and her appearance throughout the episode was just a projection of herself within her own insane Dalek mind. So cool! Anyway, the box here is very creative and it may just get me to save the packaging on this set because it is so unique and striking. Let’s start things off by looking at The Doctor! 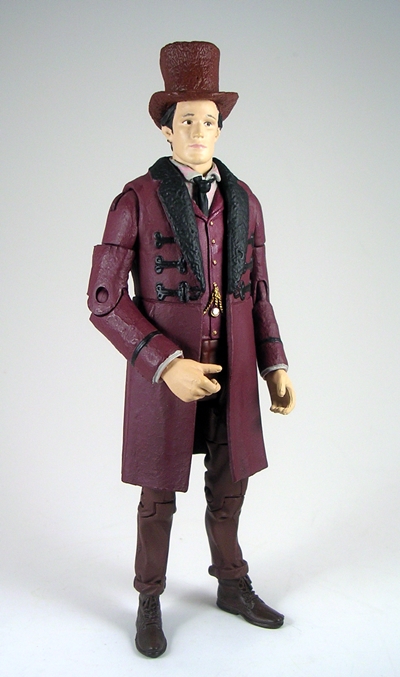 And here we have the 11th Doctor in all his sulky, brooding Victorian garb. It’s a fun figure, particularly since this was a one off look for him. There is some nice detail work on his vest, particularly the pocket watch and chain, which looks fabulous. Unfortunately, the rest of the figure doesn’t showcase some of CO’s best work. The coat and top hat both look a bit off to me. It’s like they’re made out of putty. I’d say it’s the soft plastic used for the coat, but the finish looks the same on the sleeves. I’m not sure what material that coat was supposed to be made out of, but it doesn’t look natural on the figure.

If the coat looks like it’s made out of putty, the hat looks like it’s made out of chocolate. I’m also a bit bummed that it’s not removable, but I can’t say as I didn’t expect it to be one piece with the head. The portrait here is passable, but it’s certainly not up to par with the previous Matt Smith likenesses in this scale. The paint on the face is a lot simpler and more cartoony looking too.

One nice surprise is that The Doctor actually features rotating hinges in the shoulders, a feature that has been hit and miss in the line. On the downside, most of the joints on my figure were stuck and while I didn’t have to bust out the blow dryer, I did have to do quite a bit of finessing. And even after the fact, some of the joints feel rather loose and wobbly, particularly those bicep swivels. 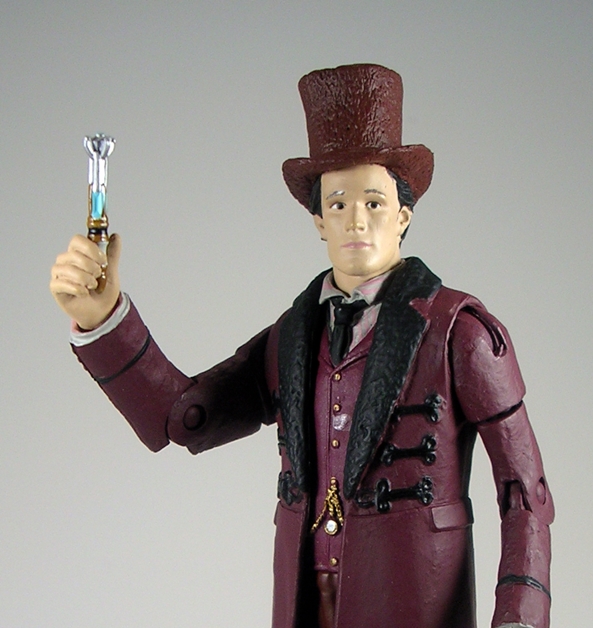 The Doctor comes with his trusty Sonic Screwdriver, which may sound like a given, but there have been more than a few sets where CO declined to toss one in.

And that brings us to what is for most the real star of this set… Oswin Oswald, or if you prefer, “Souffle Girl.” Now, I’m sure there are collectors out there who would have preferred a proper Clara. This version never actually met The Doctor until she was turned into a Dalek and it does seem odd that CO didn’t go all out for “The Snowmen” but I’m glad they went this route if for no reason other than that red dress kicked all sorts of ass. Plus, now that they got the portrait sculpted, I highly doubt this is the last we’ll see of Clara in the 5-inch scale. So, let’s go ahead and start with that portrait. 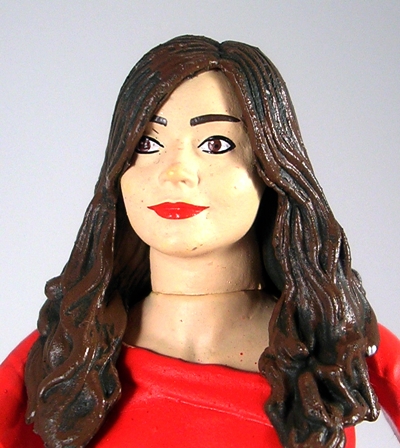 It’s garnered some criticisms early on, and I’ll concede it isn’t up there with some of CO’s finest work. It is, however, one of those sculpts that looks passable until you get up too close and then it starts to fall apart. The neck seems way too chunky and the sculpted hair defeats the neck articulation. Also, like The Doctor, the paintwork on the face here is rather simple and cartoony. Let’s be fair, Jenna Coleman is a shockingly attractive young lady and I think getting it perfect in this scale was never going to happen. We’ve certainly seen better, but at this point I’ll take what I can get.

The dress is soft plastic and layered onto the figure, which allows for a surpisingly functional waist swivel. I also like the work they did on her tool belt. All the little bits and bobs are nicely sculpted and painted and the belt itself just hangs loose around her waist. The paint and detail on Oswin’s sneakers are also well done. 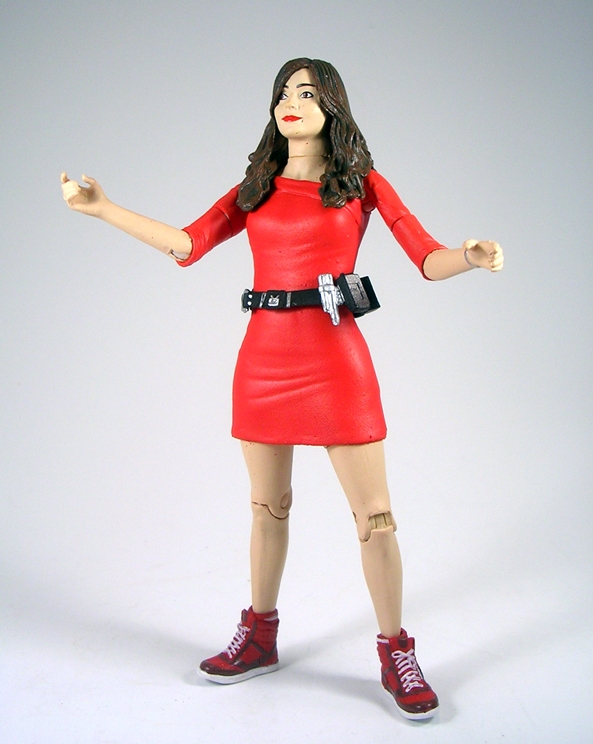 Like The Doctor, Clara features the coveted rotating hinges in the shoulders. She is missing swivels in the waist, but the rest of the articulation is what we’re used to seeing in this line. She even has a surprisingly good amount of hip articulation, thanks to the rubbery material used for the dress.

Of course, they don’t call her “Souffle Girl” for nothing and Oswin does indeed come with her very own burnt souffle. Where does she get the eggs??? If this isn’t the first time an action figure came with a souffle as an accessory, I’d like to know what that first figure was. Maybe The Swedish Chef from Palisade’s Muppets line? 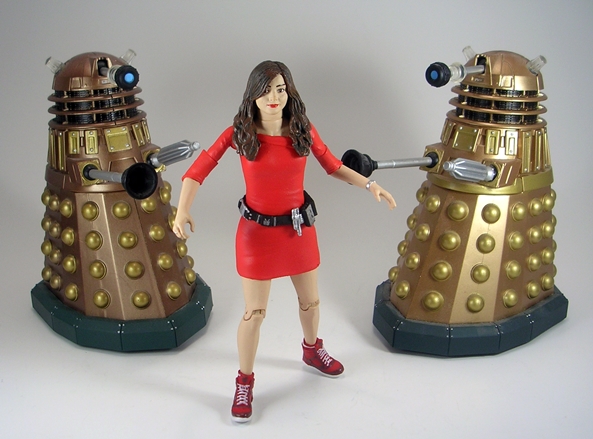 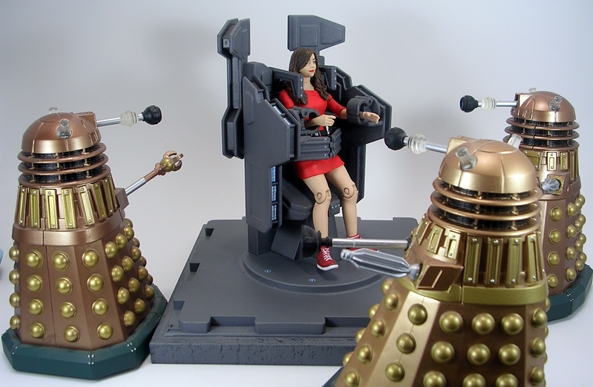 I nabbed The Impossible Set for $35 from my regular Who Merchandise Provider and tossed in some DVDs I was missing to help offset the shipping. It’s a damn good price for two niche figures, particularly considering that any 5-inch figures from this point on are special releases and I would have expected an accompanying price hike. I should be more disappointed that the overall production quality on these figures isn’t quite up to par, but the truth is that I’m just so happy that they were released I’m willing to be more forgiving. As a collector, that’s not a great position to be in, but it’s the truth nonetheless. I’m also happy to say that Character Options has another 5-inch scale set due to turn up soon. It’s based off the episode “Time of the Doctor” and it will give us our first look at the 12th Doctor in this scale!

2 comments on “Doctor Who: “The Impossible Set” by Character Options”