It’s one of the most devious marketing concoctions that I’ve ever seen: The combining of two of the three things I spend most of my money on… collectible figures and video games. Of course, Skylanders did it first and while I admired the concept, I was able to keep otherwise disinterested. Then Disney got into it with Infinity 1.0, and while I was surely tempted by getting a set of The Incredibles and playing their adventures, it wasn’t enough to get me to buy the whole setup. But that third thing I mentioned spending money on? Comic books. And with Marvel now brought into the fold of Disney’s figure based gaming system, Infinity 2.0, I could no longer sit by on the sidelines. In fact, I barely lasted longer than a couple of weeks from the launch. 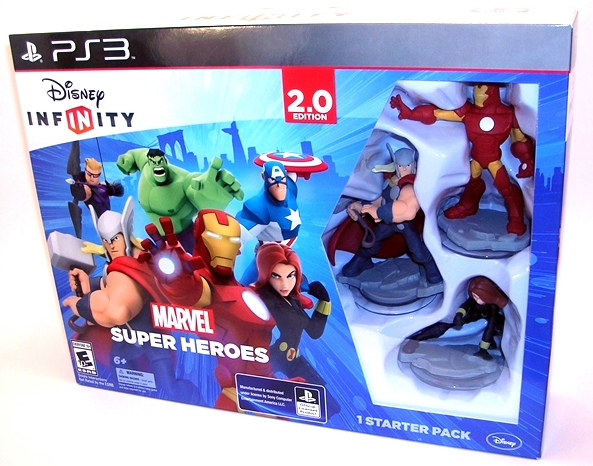 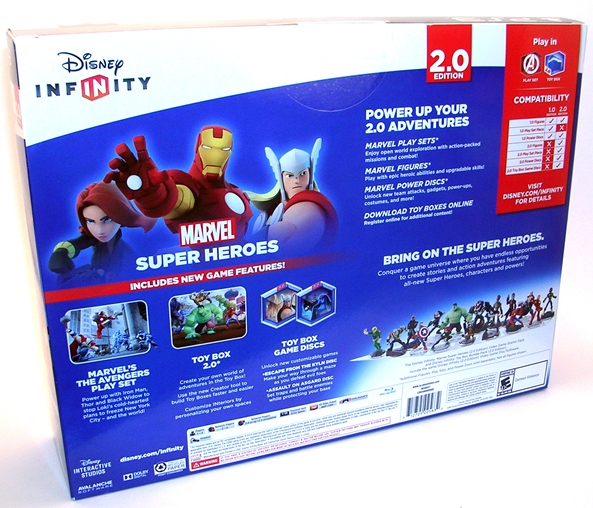 Obviously, video games aren’t something that I review here, but I’m making an exception because these are also figures based on one of my favorite properties. I’ll give some impressions of the game at the end, but for the uninitiated let me at least try to explain what this whole Infinity 2.0 thing is all about. The Starter Kit comes with the game disc, the portal, the three figures (Iron Man, Thor, and Black Widow), the Avengers Play Set piece, and two Power Discs. The portal is the interface you use to unlock the content tied to the pieces and it lights up when you put the pieces into place. There’s one hexagonal space and two circular. The hex space is for either the Play Set piece, which is basically the main game you’re going to play, or Power Discs that are tied to the Toy Box, which is sandbox type area where you can play other games or make your own with a comprehensive editor. It’s kind of like a cross between Animal Crossing and Minecraft with mini-games and the ability to create and script your own mini-games. Everything you do in the Play Set game unlocks stuff or gives you currency that you can use in the Toy Box. Sound complicated? It really is until you’ve spent some time sussing it out. 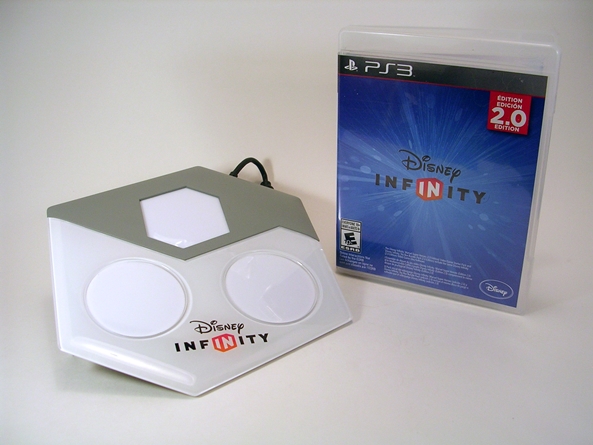 Right now there are three Play Sets available: This Avengers (included with the Starter Set), Ultimate Spider-Man, and Guardians of the Galaxy. The later two each come with two figures. Individual figures are also sold and each one is tied to a specific Play Set. The game limits what figures you can use with which Play Sets although with Crossover Coins you can make a couple exceptions. For example in The Avengers Play Set, there are 10 coins for Rocket Raccoon and 10 for Nova and if you collect them all you can import those figures into The Avengers Play Set, but that’s the limitation of the crossover. On the other hand, any 2.0 figures, and 1.0 figures, for that matter can be used in Toy Box. So, if you have a Marvel related Toy Box game, you can still buy yourself an Elsa from Frozen or a Lightning McQueen from Cars and use them in it. The figures are actually just stylized statues, roughly four inches tall, but they are much better quality then I was expecting. I heard some early reports about really bad paint, but I went with the first set I picked off the shelf and they are absolutely fine in hand. The same goes for the one individual figure I bought. Let’s take a look at the three… 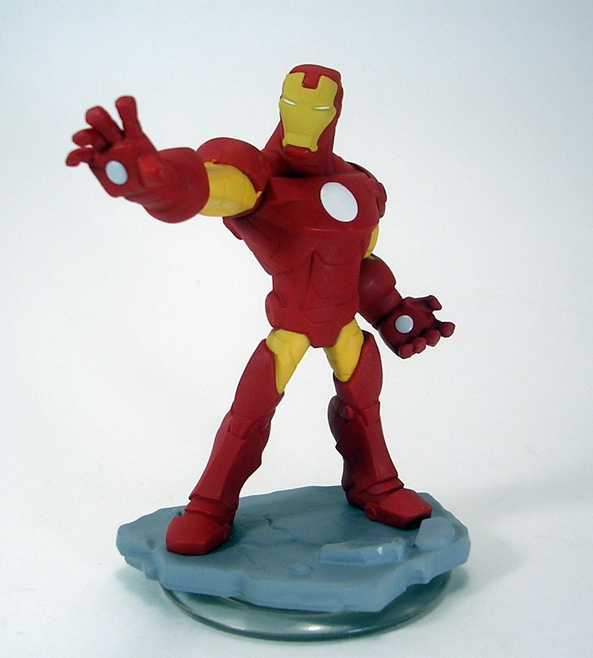 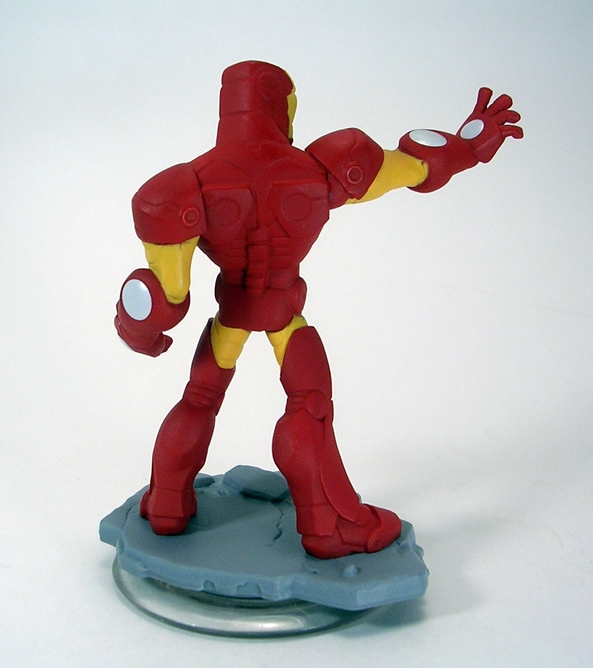 Iron Man is pretty cool, but he’s definitely my least favorite figure of the three. I don’t think the style works for him quite as well as the others and the coloring on him seems a little dull. Still, there’s some good detail on him and it’s a classic pose. Just because he comes up bottom of this batch doesn’t mean that I don’t still dig him a lot. The base portrays a broken piece of concrete with the interace disc on the bottom so he can sit on the portal. 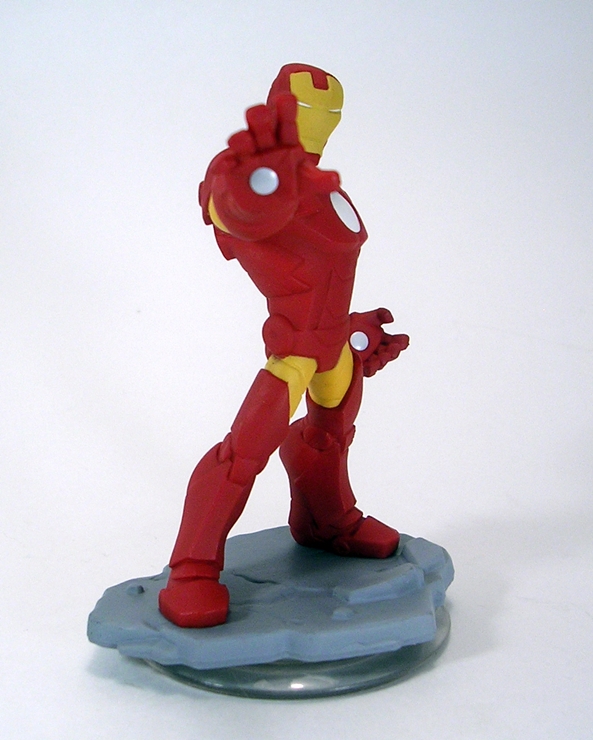 Of the three characters, I’ve spent the most time playing as Iron Man in the game, and he is tons of fun. He flies, hovers, and has some vicious combos that change it up between melee and close range. The animations for his attacks are really fluid and look great. I love the way he’ll punch one guy, blast another with his repulsor and smack another one without missing a beat. Once I got him leveled up and followed a very offensive path on his skill tree, he was a veritable killing machine.  Also, his special move, an area-clearing missile barrage, is so damn satisfying and hasn’t gotten old yet. 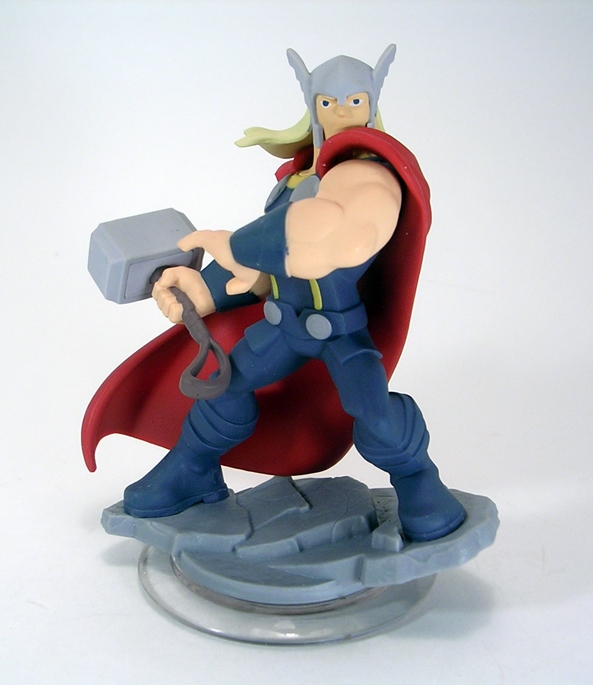 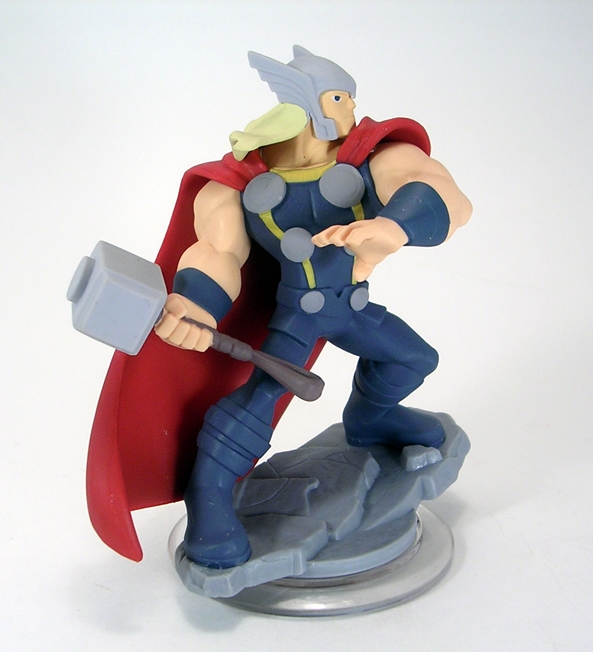 Thor is a particularly nice piece quite chunky too. I really dig his pose a lot, as he stands drawing Mjolnir back a little and has his cape swishing all about him. He has the same shattered concrete style base, but it’s angled upward a bit to help the composition of his heroic pose. The paint on this figure is the weakest of the three, but that’s only because there are a few black smudges on his cape, otherwise it’s still pretty good. 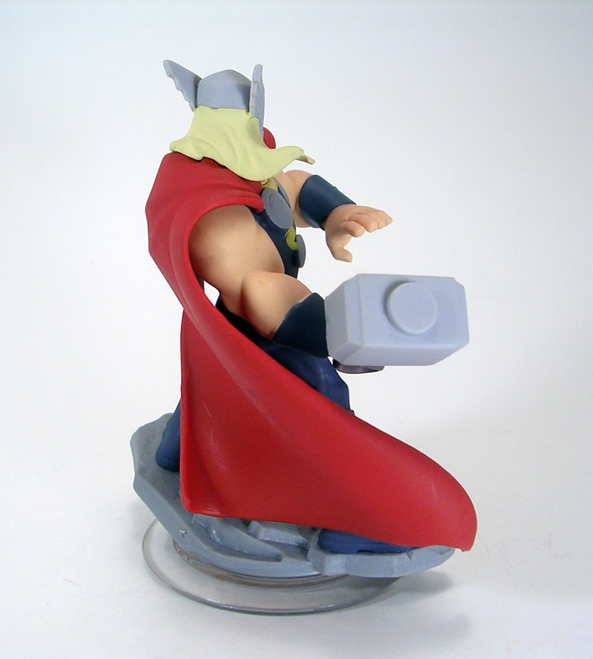 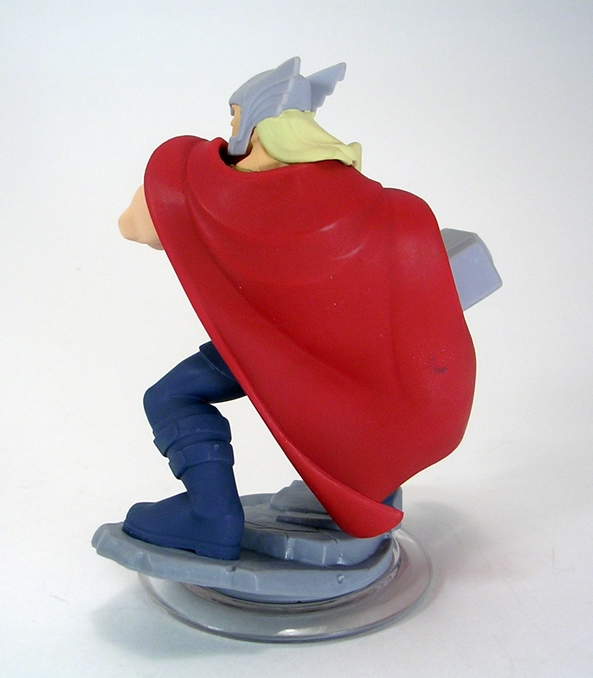 Of the three characters, I’ve played as Thor the least, but I’m going to remedy that this weekend by starting a new game and spending some quality time with this Asgardian. I’ve got nothing against Thor, it’s just that I happened to start with Iron Man and Black Widow and they just happened to monopolize my time. Like, Iron Man, Thor can fly and his ranged attack, while slower because he has to wait for Mjolnir to return to him, is still pretty powerful. He also has some pretty lightning attacks and some great quips. 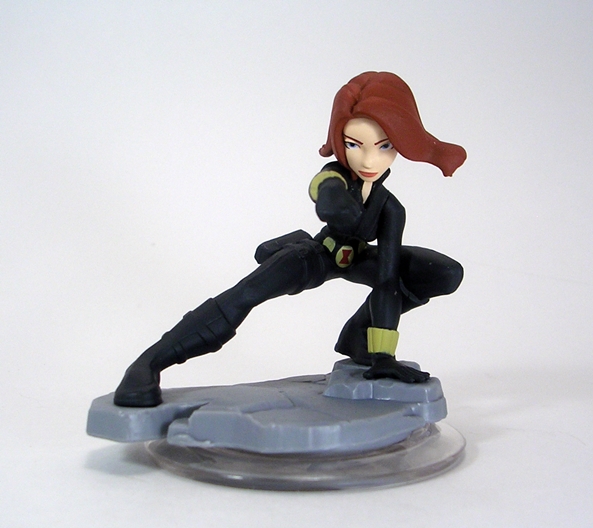 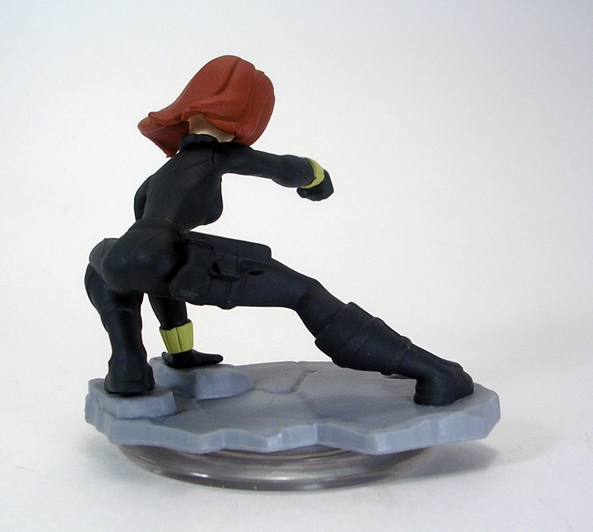 Black Widow may be my favorite figure of the bunch, partly because I love her kinetic pose and partly because I think she just looks adorable as a Disney-fied character. Hey, Black Widow is a Disney Princess now! She’s got her iconic stinger bracelets and even a gun holstered on her hip. Yes, folks, this is a Disney statue packing an automatic pistol! The paintwork on this one is really exceptional too. Yeah, she’s mostly black, but it’s impressive how they were able to get to those hard to reach bits, like the hourglass emblem on her belt buckle. 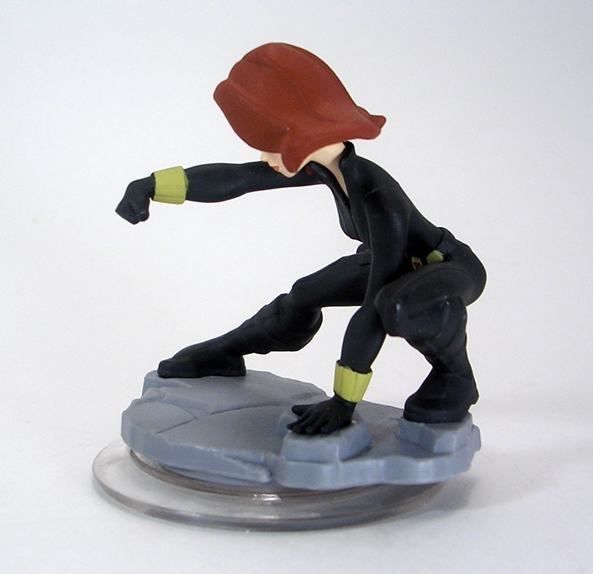 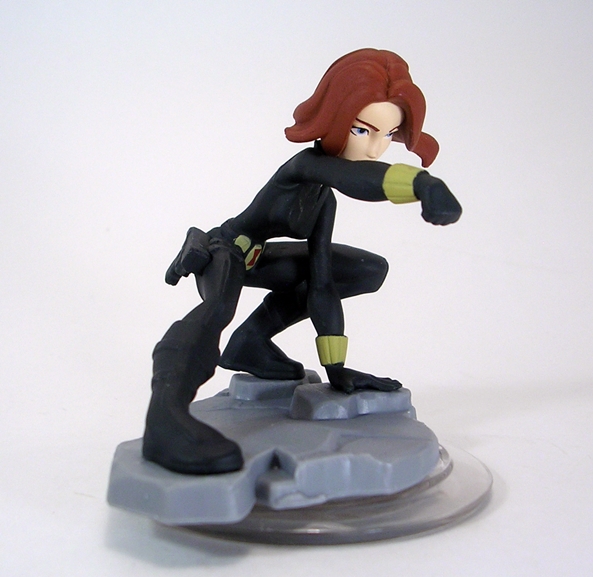 As a playable character, she’s easily the most limited since she can’t fly, but I find that makes her interesting in her own right. She needs to rely on summoning motorcycles to get around fast and can utilize strategically placed trampoline pads to get to the tops of buildings. Of course, you could just wait until you’ve unlocked one of SHIELD’s flying motorcycles to help her get around too. Her combat is fast and fun, although you actually have to unlock her ability to dual wield pistols. Special moves include a cloaking skill, called “The Widow’s Veil,” and her “Widow Sting,” which unleashes a satisfying chained electrical attack! 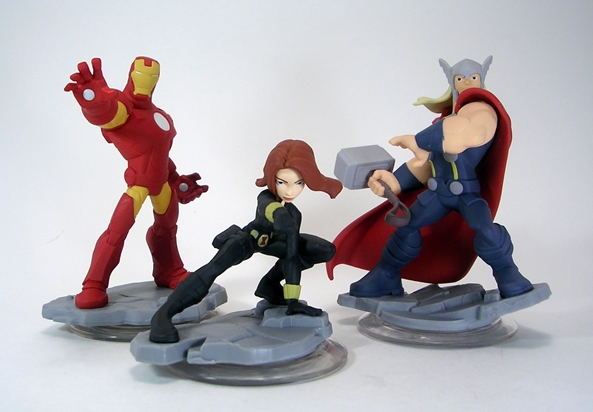 I haven’t messed around with Toy Box yet, but I’ve played through The Avengers game once and have started a new one with different characters. The gameplay is very reminiscent of a LEGO game, and that isn’t a bad thing. You basically roam an open city and take on missions, nearly all of which are just excuses to make you fight lots and lots of Frost Giants. The story progresses a bit with some boss encounters and as you fight your character levels up and you can spent points on unlocking new skills or improving existing ones. You also collect currency to spend on stuff in the Toy Box. The main game is not very deep, it’s a tad buggy, and the occasional herky-jerky frame rate is inexcusable for how simple the graphic style is, but man is it fun. Each character is distinct enough to make it worth playing through separately, although you can swap out figures to change characters at any time. While most of the time death isn’t really punished, there are some fights where if you die you’ll have to swap out your dead figure for another one. I really dig that.

At $75, I don’t think the price here is unreasonable, considering a lot of new games are starting at $59.99 and this one comes with the figures and the USB portal. On the other hand, if you’re already an adopter of Infinity 1.0, I imagine it would be irksome to have to pony up for another Starter Kit. Consolation may come in the fact that Disney made some vast improvments to the Toy Box and in the end, that’s probably where most of the time will be spent long after the three Play Sets have been beaten to death. I really dig the figures as collectibles, and I can see myself going all out with buying them. At about $15 each they aren’t such a great value solely as collectibles, but when you add in the unlockable content I think it more or less costs out. I didn’t really get into the Power Discs at all, but I’ll save that for next weekend when I check out another one of the figures.