I try to work something Marvel into each week, but last week it just didn’t happen. As a result, I’m double dipping today and giving you two figures for the price of one feature. Ok, it’s not really about a sense of value and fairplay, it’s more because these are two pegwarmers from the first wave of Marvel Infinite and I’m not sure each is really worthy of his own feature. Today we’ll check out Captain America and Iron Man…

Wave 1 consisted of some really solid figures like Wasp, Hulk, Executioner, and then you had these guys. I can understand the need to keep main characters on the pegs, and this is an Avengers based series after all, but Cap and Iron Man figure fatigue was in full swing by the time these figures hit the pegs. This pair was quickly turning into the Bumblebee of the Hasbro Marvel line. Everywhere I went these were the only two I ever saw. Yeah, I still hate this packaging, so I’ll pass on ripping it apart figuratively and jump right it into doing so literally. Let’s start with Cap… 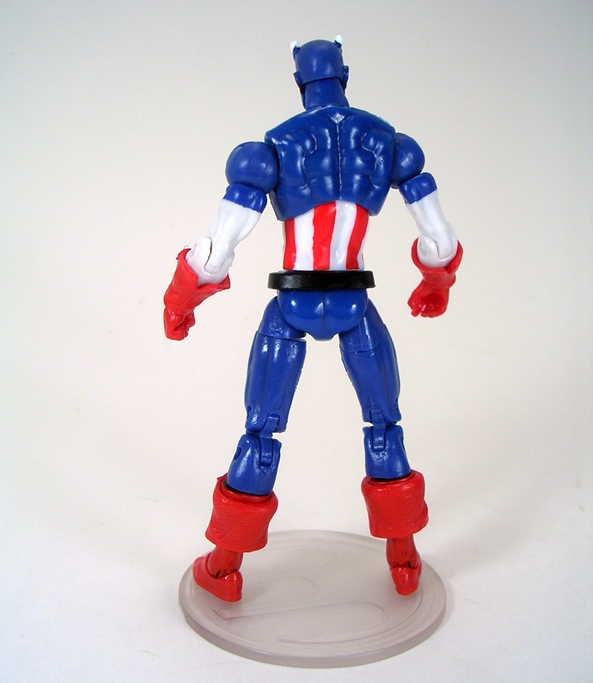 So, straight away I’m a little confused as to the context here. Logically I would have expected this one to be either a Marvel NOW! or Heroic Age Cap, but he’s clearly neither. Instead what we have seems to be fairly general “use him for whatever you want Cap.” The belt, boot cuffs and raised wings all make him feel like a more traditional appearance of the costume, but he lacks the texturing to the upper body that I usually associate with a Secret Wars era Cap. It’s also worth noting that he’s strapped into that tray so tight that my figure came out a little warped. 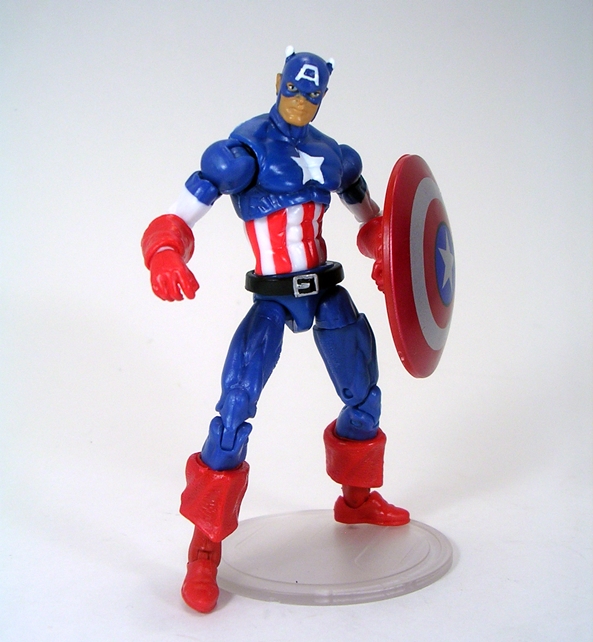 Now that’s not to say he’s a bad figure. In fact, the only thing I’m not terribly keen on are the protruding wings on his mask. They look more like tiny horns than wings. It’s like Rogers borrowed one of Daredevil’s masks and customized it. The coloring on the figure is particularly bright and the paintwork is clean. He also has all the great articulation of the more modern 3 3/4” Marvel bucks, which includes the swivels in the biceps as well as both at the thighs and the boots and the added hinge in the ball jointed neck. He even has lateral rockers in the ankles. Yup, Cap has got loads of poseability and he is damn fun to play with. 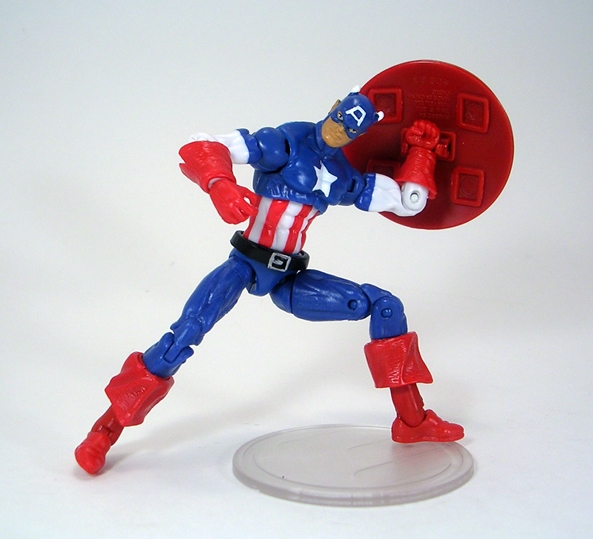 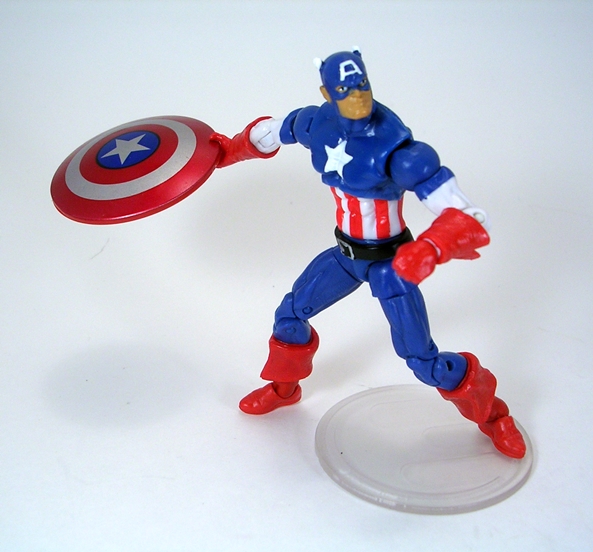 The shield is of the clip-on variety although I haven’t seen this particular one before. It’s dated 2011, but it has four sculpted squares inside the back of it. There’s no peg on it to secure to Cap’s back and no peghole there either, which is a disappointment. On the other hand, the paint on the front of the shield is immaculate.

Moving on to Iron Man, there’s no mistaking this version, as he’s donning the Heroic Age armor. I’m a big fan of this suit and I absolutely loved the Marvel Legends version from a little while back, so getting to add it to my 3 3/4” collection was a big deal for me. The figure feels like it should be a little bulkier, but otherwise it’s a really nice recreation of this suit in the smaller scale. The red and gold deco is gorgeous and he has the white and blue power points on his legs and hips as well as the Arc Reactor on his chest. You even get painted repulsors on the soles of his boots! He’s not quite as good as a scaled down version of the 6-inch figure, but he still looks great. 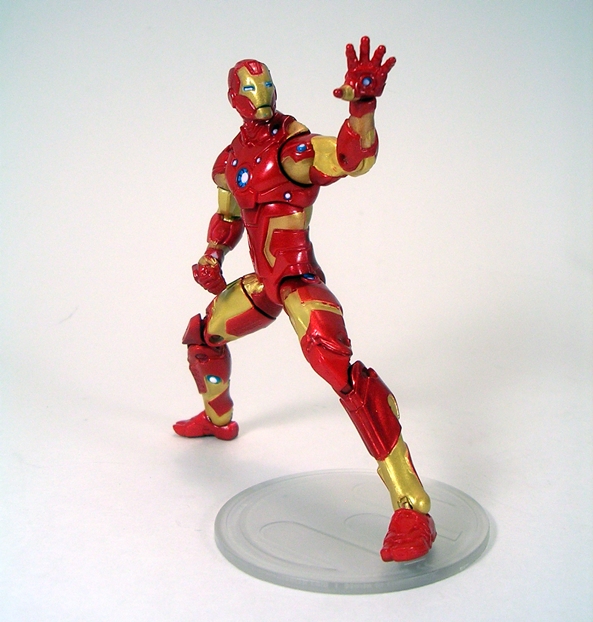 The articulation on Iron Man is a bit more limited than what we saw on Cap. There’s no waist swivel and no swivels in the lower legs. You do, however, still get the ankle rockers, which is always impressive to me when offered in this small scale. His left hand is sculpted flat as if firing off a repulsor blast, but because the wrists have only swivels and no hinges, it’s tough to get him into the firing position, at least not with his arm held straight out. His other hand is balled into a fist. 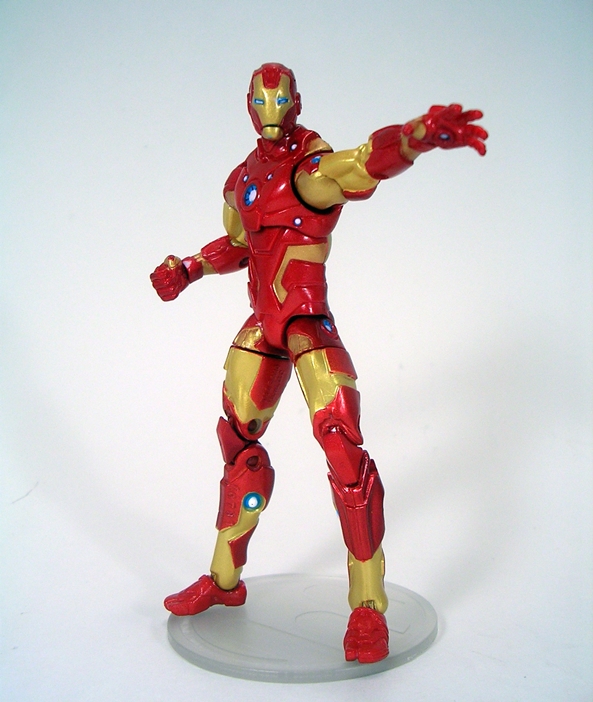 Iron Man comes with that ridiculous cone of energy effect part that we’ve seen time and time again. I can’t put into words how much I hate this thing and wish it would go away. It’s supposed to clip onto his wrist, but it doesn’t look like anything. I used to save these, now I just throw them away with the packaging.

If you’re new to collecting the Marvel 3 3/4” figures this pair can fill a couple of important slots and can be found clearanced at many online retailers for about $5 each. It’s a cheap and easy way to get the characters. They’re both certainly good figures, but long time collectors may find the Cap a little generic and redundant, whereas the Iron Man is certainly worth hunting down and picking up if you want a wide variety of Stark Tech armors in this scale. I picked these up as part of the entire wave a while back and I only now got around to opening them, so that should tell you something.