It may be November already (holy shit!!!), but I still have unfinished business with my October Matty Subscription figures. Last week I checked out the Club Etheria Exclusive, Light Hope, this time I’m going to take a look at October’s Club Eternia figure, Eldor. As I understand it, Eldor was a figure that Masters fans were pretty excited to get. I know nothing about this guy, but I thought the official pictures of him looked cool enough. Some of you may know that a big part of my love of this line is for the figures themselves rather than the characters they represent. So, let’s see what Eldor is all about…

There’s a shot of the very familiar packaging and damn, if he don’t look cool in there reading his book while surrounded by all that greyskull stonework. Eldor’s tag line is “Heroic Guardian of the Book of Living Spells.” That sounds pretty important. I read the bio on the back of the card and it made my brain hurt. I was, however, able to glean a couple of things from it. One, this guy is a wizard and Two he’s from Preternia, which is probably why I know nothing about him. I can take or leave most of the Masters fiction, but the Preternian stuff is definitely outside of my wheelhouse.

I’m also not scoring too well based on the figures on the back of this card. With just Eldor, Rattlor, and Hssss on my shelves, I’m only at 50% and I suppose that makes me a bad fan. I have no interest in that Preternian Disguise He-Man, but I could see myself grabbing up Snake Face and He-Ro at some point in time.

As a wizard, Eldor has an interesting look that both embraces and dispels the classic wizard design tropes. The fact that he’s built on the traditional MOTUC buck is easily the biggest departure from the often seen withered and decrepit old man spellcaster. Oh, but as his name suggests, Eldor does in some ways look like he’s long in the years, but with the ripped muscles on his arms and legs and that broad chest, he’s obviously an old codger that has taken damn fine care of himself. He may know magic, but this is a guy who can also kick your ass. His outfit consists of a belted jacket and tunic, which is fashioned in soft, rubbery plastic and attached over the buck like a vest and he has a matching, and removable, hood.

Look at that fine ass! Wait, what? No! I really took that picture to show off the great detail on his belt. He’s got a little hooked knife and what look like a couple of dog tags hanging off one side. I have no idea what the tags are or but they have some kind of symbols etched on them. The little knife is also a mystery. Maybe I don’t want to know what he does with that. Brises for hire? On the other side of his butt, he’s equipped with what is probably a bag of magical reagents. They also did a nice job distressing the fringe of his jacket. What’s also especially cool is the texturing that they put into his hood and the fringe of the jacket. It feels sort of like corduroy. Under the jacket you can see the stitching and lacing on his exposed tunic. All these little touches make for a real stand out figure.

It’s in the portrait where Eldor betrays his age. He features a stern looking, white bearded visage with some sculpted creases in the forehead and around the eyes. The hood is a separate sculpted piece of plastic that fits on the figure very well. If you remove it, the fringe of the coat behind his head actually looks like it could be the hood in a down position, which is an incredibly nice touch.

Under his hood Eldor wears a tight-fitting skull cap, which is painted and sculpted to look like it’s fashioned from hammered bronze. It reminds me of a less flashy version of the cap Nicol Williamson wore as Merlin in the 1981 film Excalibur. God, I love that movie! Anyway, everything about this guy just looks great. Eldor’s is easily one of the absolute best head sculpts we’ve seen in this entire line. The Four Horsemen really outdid themselves with this figure.

Every wizard needs a staff and Eldor comes with a real beauty. It’s sculpted to look like it was carved from a single piece of ancient and enchanted wood and the head of the staff forms a “C” and holds a clear magic crystal. Eldor can hold it in either hand or both, but I should mention that the fingers on my figure’s hands are curiously tight so getting it into his hands is a bit of a challenge. 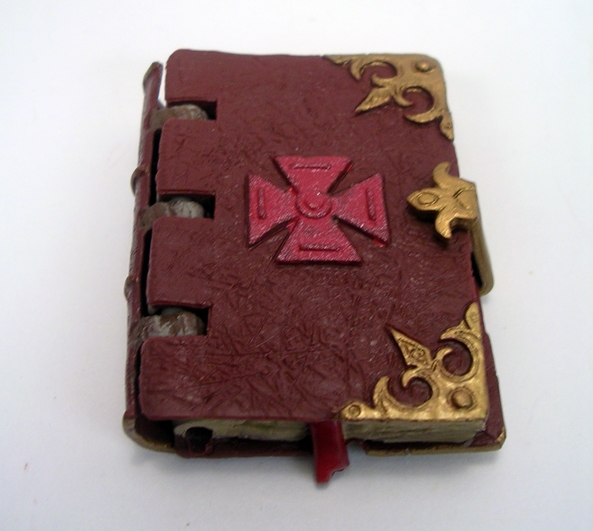 The other item in Eldor’s inventory is perhaps one of my all time favorite action figure accessories: The Book of Living Spells! In addition to action figures, toys, and statues, I’m also a book collector. Or at least I once was. I’ve stopped adding to that collection for fear of one day getting crushed by a book avalanche, but I still have hundreds of great books and I even owned my own antiquarian bookshop for the better part of a decade. So it should come as no surprise that I think this is easily the coolest rendition of a book in plastic form that I’ve seen. 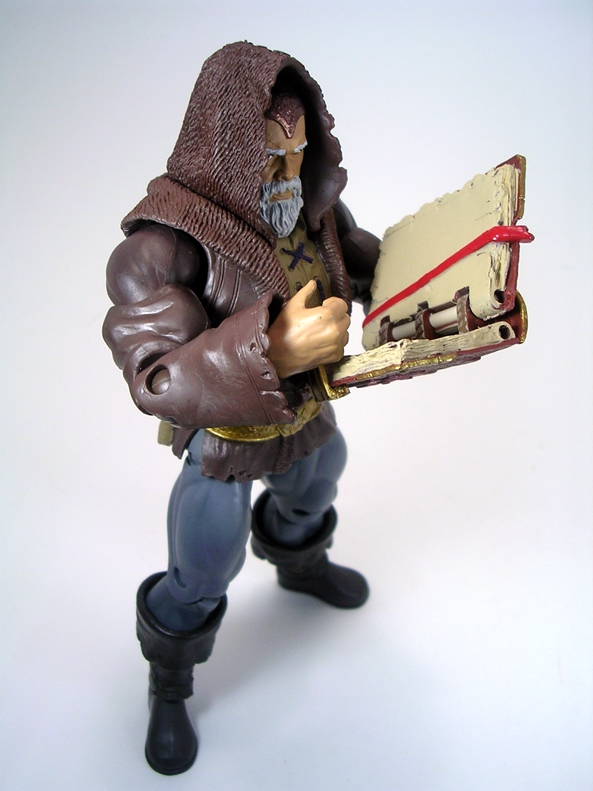 The cover features gold painted fixtures and a clasp and the pages look appropriately aged and ragged. It’s the spitting image of what my mind conjures when I think of ancient magic tomes. Pop the clasp and the book’s covers are hinged, allowing it to open up. My only gripe here is that there’s no printing on the pages, although the bookmark is there. With how amazing everything else is with this figure, it seems like a rather obvious oversight. I hear tell some intrepid collector is cooking up a set of decals to add lettering to the pages. I’d be real interested in getting my hands on those! Either way, I don’t want to take away from what a cool accessory this is.

Once again, this is what I love about the MOTUC line. This is why I put up with the crazy website and the questionable customer service and the slow and expensive shipping. Figures like Eldor are what it’s all about. I have no idea who this guy is or what his role in the Masters Universe might be. I don’t even care. I think it’s great that Masters fans recognize him and are happy to be getting a figure of him, but for me that’s not the point. The point is he’s an amazing figure crafted with great attention to detail and he’d be right at home in any fantasy collection. When you consider that just about every single figure or statue in my collection is tied to some character from some fiction that I follow, it’s refreshing sometimes to get figures just for their own sake. I have a separate little display along side my MOTUC shelves where I keep Vikor and Battleground Teela with Battle Lion. To me, these are just fantasy type figures that exist in my mind outside the Masters Universe. I do believe Eldor will be joining them. Sorry if that’s sacriledge to fans of the Masters fiction, but I think they look amazing together.