I’ve had the most recent wave of Star Wars Black 6-inch sitting on my receivings pile for a while now so I’m going to bookend this week with two of the figures from this assortment. No doubt, Hasbro has made some erratic character choices for the initial waves of the series. Three versions of Luke and where the hell is my C-3PO? Well, R2 may be waiting for his prissy counterpart, but at least this last wave has finally reunited Han Solo with his trusty shaggy chum, Chewbacca. I’ve been looking forward to this release ever since I opened Han, so let’s get to it… 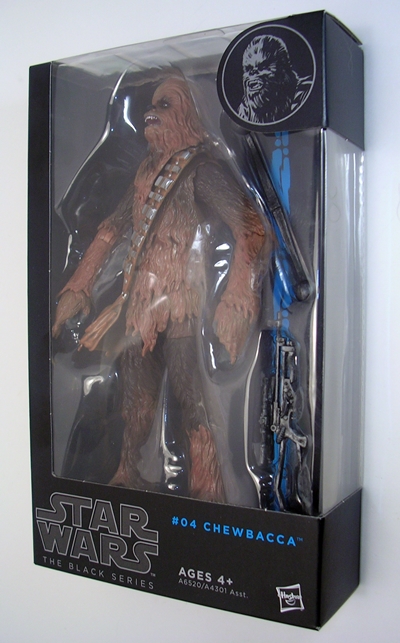 Hasbro has made some tweaks to the packaging for this new wave, but the changes are mostly superficial. Chewy still comes in a black window box, which is designed to stand on the shelf or hang on a peg. The figure comes on a clear plastic tray and the packaging is still totally collector friendly. His bowcaster is mounted, partially disassembled, at his side. Of course, the changes are bound to piss off collectors who have been keeping their figures boxed and like to line them up on the shelf. Ah, but I pitch the boxes, so I care not! 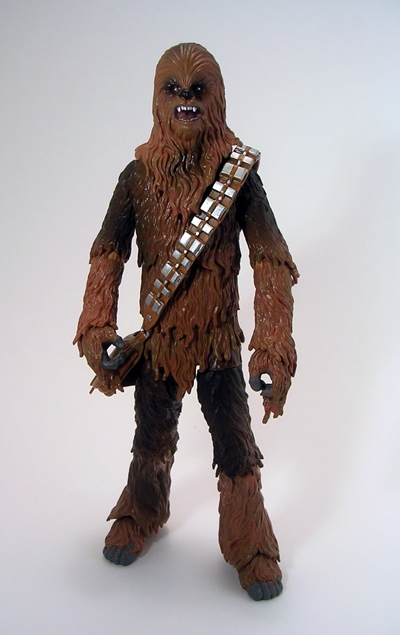 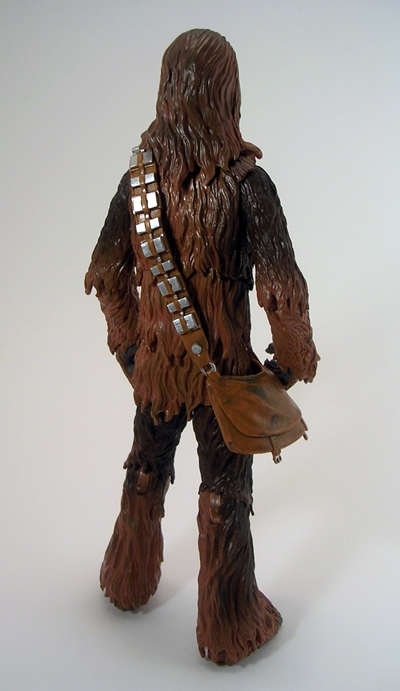 So straightaway, I really dig the sculpt on this Wookie. Just looking at the figure and taking it all in, I think it looks great. Is it a huge improvement over any of the 3 3/4” Chewie offerings? Yeah, I think he is! I love the way his sculpted hair looks appropriately shaggy, particularly around his wrists and ankles and Hasbro did a nice job using that sculpted shag to conceal some of the jointing. I also dig the way they actually sculpted his hands and feet under all that hair. Look… Wookie Feet! (Remember that password, Kyle Katarn, it might come in handy later!) The bandolier strap and satchel are sculpted in a separate piece and if you want to remove it, you need only pop off Chewie’s head to do so. Oh yeah, did I mention he’s really freaking tall? Han barely comes up to his shoulders. Nice!

This figure has caught a lot of criticism over the head sculpt, most particularly the open mouth mid roar. Fans seem to have preferred Hasbro went with a more neutral expression. I’m actually quite pleased with the way the expression came out. It’s not quite a full roar, more like Chewie’s just talking. Whether I decide to pose him just standing next to Han or repelling a squad of Stormtroopers, I think the expression can work for either. In the end, I suppose it comes down to just a matter of taste. 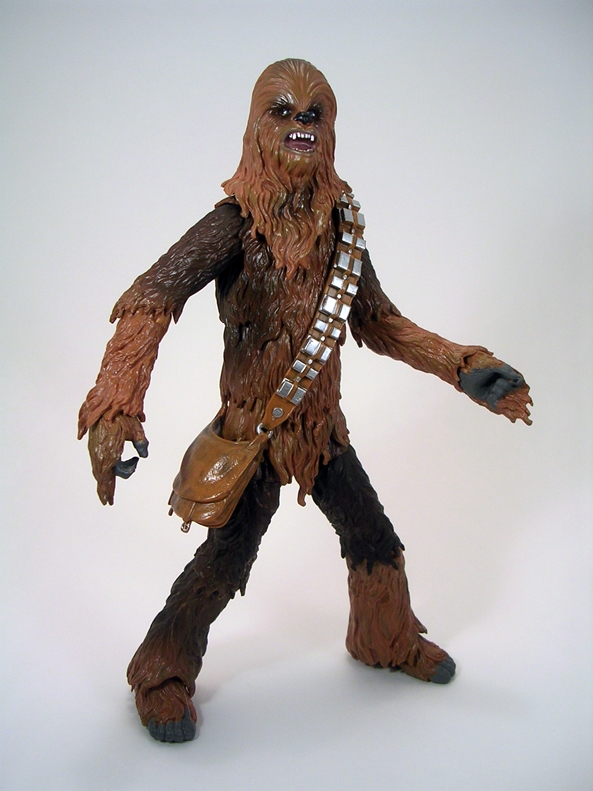 The paint on the figure isn’t terribly complex. You get a couple shades to the fur which gives him a combination milk chocolate and dark chocolate look. Maybe the dark is a little too much on the upper legs, but it’s nothing I’m going to really complain about. There’s also some grey on his fingers and toes, which is something I’ve never noticed on any previous Chewie figures, but I like it. The only drastic departure from the fur is the metalic silver paint used for the cartridges and fixtures on his bandolier. 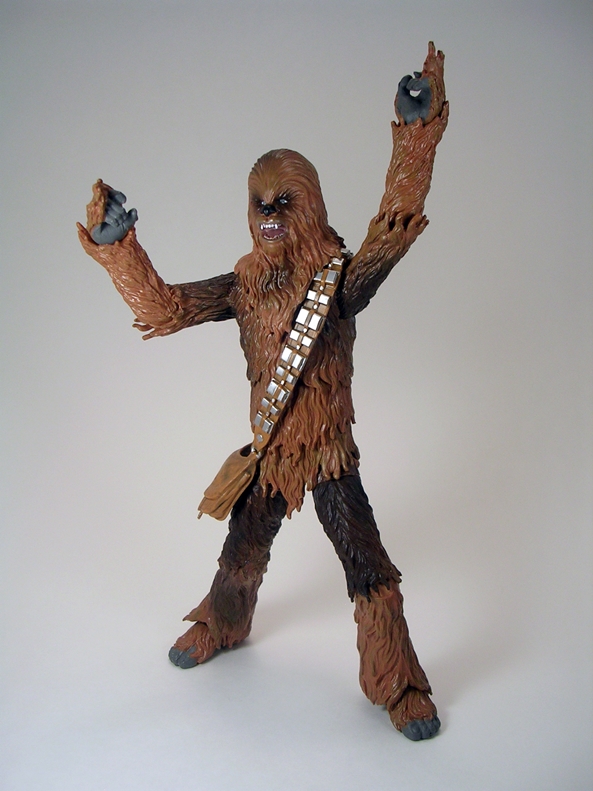 If I have one issue with Chewie it’s in the articulation, but before I get to that let’s run down the points. You get rotating hinges in the shoulders, elbows, wrists, knees, and ankles. The legs are ball jointed at the hips and have swivel cuts in the thighs. Chewie features two sets of ball joints in the torso and a ball joint in the neck. What, no swivel cuts in the biceps? Yup, that’s disappointing. As I expected the sculpted hair certainly interferes with how much some of the joints will move, but you can still get a good amount of poses out of him. The head includes a generous triangle of hair that runs down his front and back. You can get a little movement left or right, but much more then that and his head will pop off. I think this was an issue of sculpt over articulation, and in hindsight Hasbro probably made the right choice. 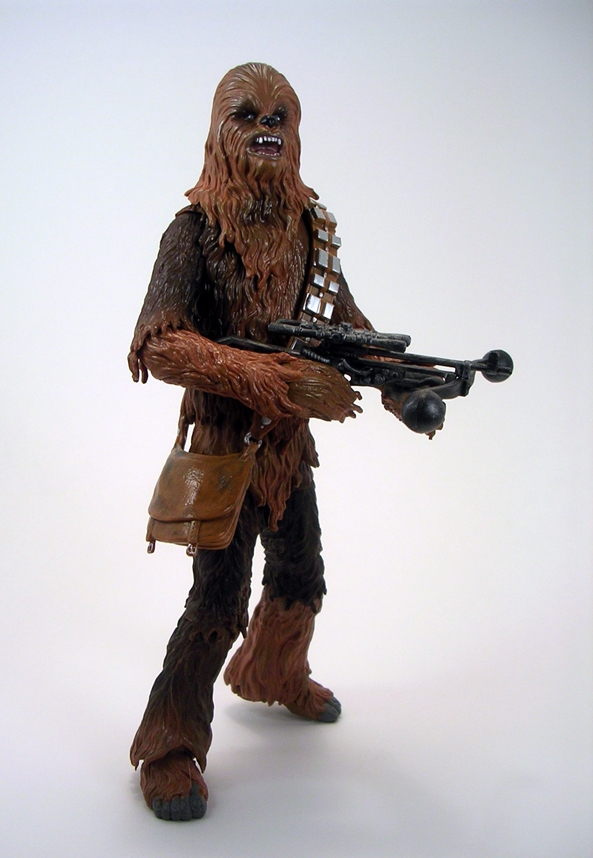 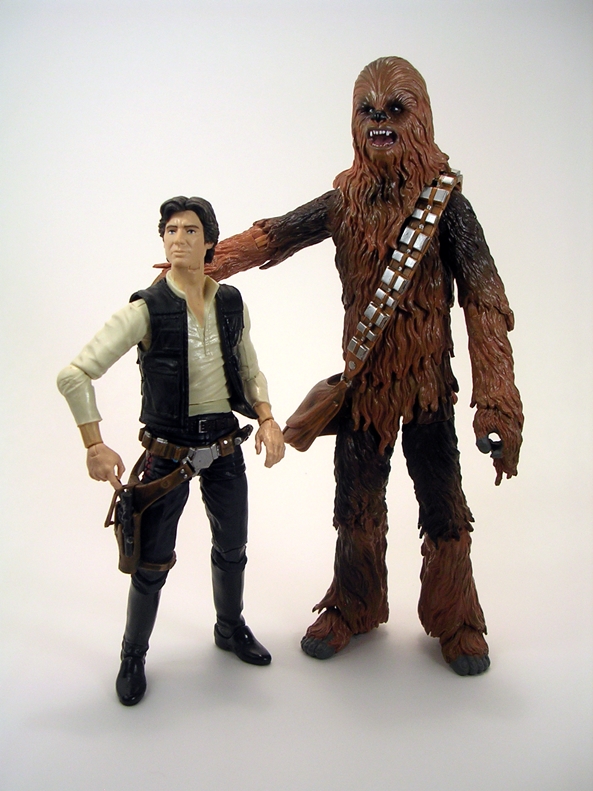 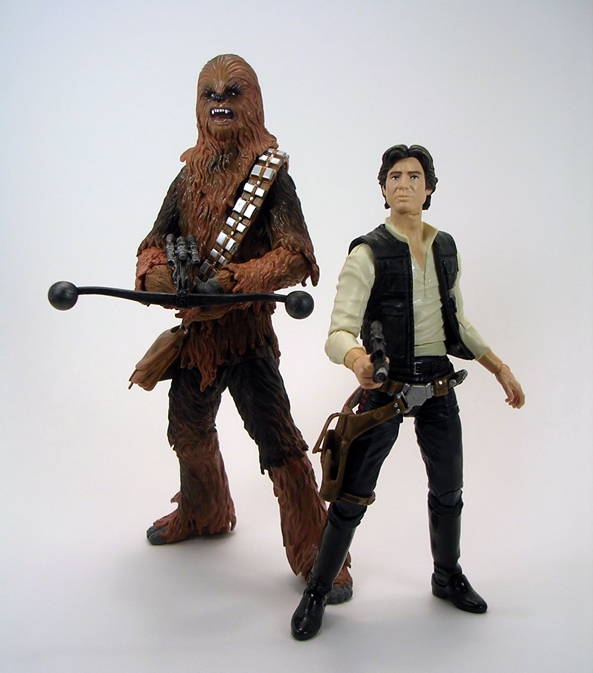 I absolutely love this figure! While there were a few compromises between sculpt and articulation, I think Hasbro hit all the right points and delivered an incredibly fun and great looking version of the big walking carpet. I found myself playing with him on my desk a lot longer than I have some of the other figures in this line and that’s always the best compliment I can give. In fact, he’s probably in my top four figures released in this line so far. What’s more he looks absolutely amazing when posed besides Han or crushing loads of Stormtroopers with his bare hands. I only hope that we eventually get a break apart C-3PO with a net so Chewie can carry him around on his back.

Saturday I’ll swing back to more Black with a look at The Dark Lord of the Sith himself!