I’ve certainly given my share of grief to Funko’s ReAction line of action figures and that’s despite only having featured one of them here on FFZ. I’m not against the concept. Hell, my unending praise of Warpo’s Legends of Cthulhu line alone should prove that. But Funko’s scatter shot approach to the whole retro-vintage thing makes it seem more like a shameless cash grab than actually doing something interesting with the concept. This entire faux-vintage idea grew out of Super-7 bringing the un-produced Kenner Alien figures to market based on original prototypes. It was a pretty big success for something as niche as it was and so ReAction was born giving us “what if” imaginings of lines that were never produced. I think it’s a noble gesture where actual 70’s and 80’s properties are concerned, but when you extend it to stuff like Firefly or Buffy the Vampire Slayer, everything starts to break down. Of course, by casting a wide, wide, WIDE net over all sorts of properties it means that they do have a chance to get it right sometimes and today we’re looking at one of those instances with Series 2 of their Universal Monsters. (I know, “what happened to Series 1?” I’ll get to it eventually.) Keep in mind, these figures aren’t a case of paying tribute to what could have been, but rather what was, as the company REMCO* put out a line of six 3 3/4” Universal Monsters figures back in 1979 and I have a lot of fond memories of those figures and the playsets.

Series 2 consists of Dracula, The Mummy, The Phantom of the Opera and The Wolfman. While Series 1 actually contains my favorite monster, The Gillman, I went with this Series first because I thought it was a little better fleshed out and all of the figures were ones featured in the vintage REMCO line. I like the fact that the cards are all original and the front of each one is branded solely based on the character’s movie. You actually have to turn the card over to see anything tying it in with a larger series. The figures each come just rattling around in their coffin-style bubbles, just like the good old days, although my Dracula came with the bubble completely detached from the card. That sort of thing would have really pissed me off if I was keeping them carded, but who am I kidding? There was never any chance of that! 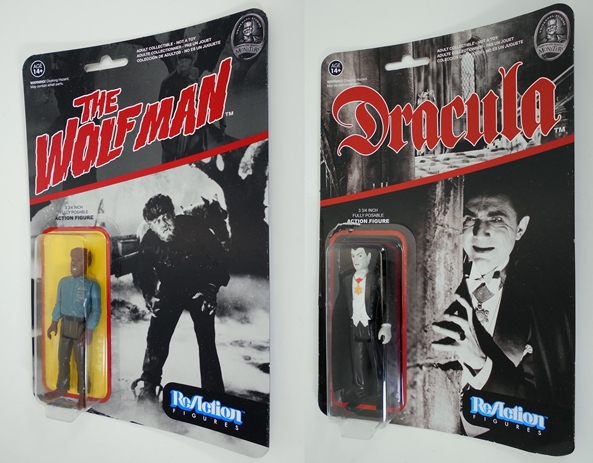 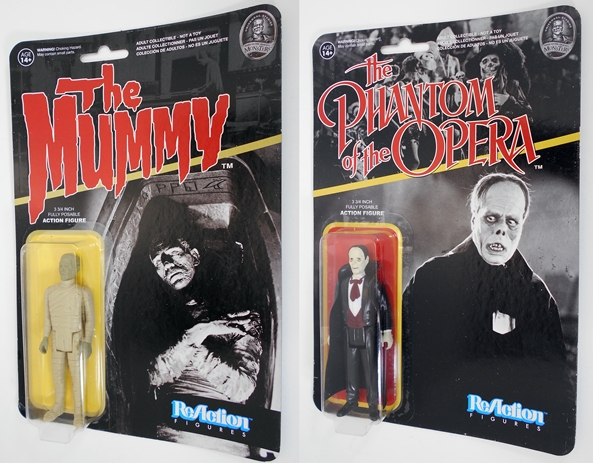 It would be impossible to pick my favorite card in this set as they all feature great B&W shots from the original films. I will say that I get a chuckle out of The Phantom’s every time I look at it. It looks like Lon Chaney is looking down in horror at his little action figure! Everyone’s a critic! As good as these cards are, I really wasn’t sad about opening them up. It’s probably because the appeal here is the figures themselves as replacements for my beloved REMCO monsters. Let’s start out with Dracula and The Phantom of the Opera. 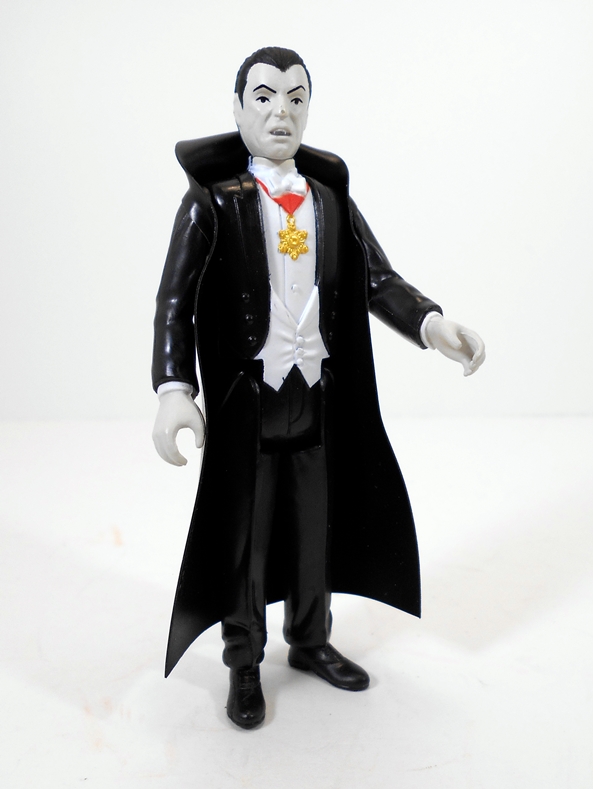 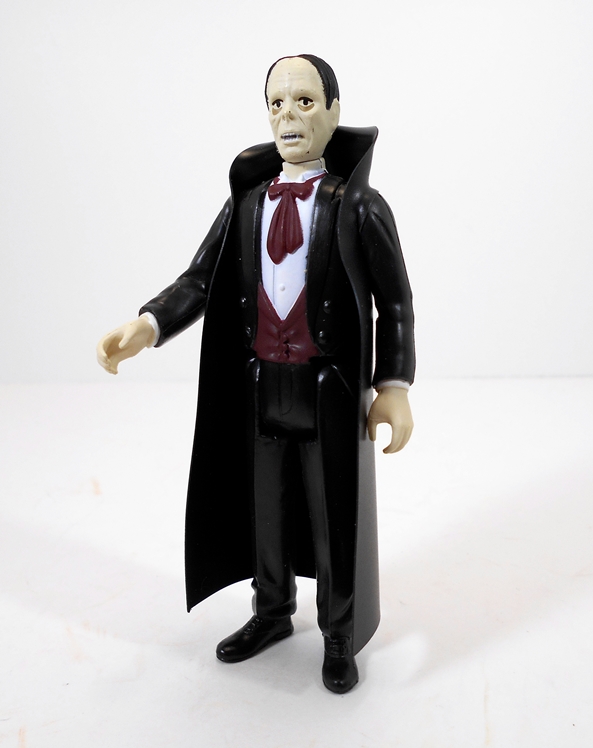 These guys look splendid, although as might be expected there’s some parts sharing and resculpting here. You wouldn’t think that would be a factor in cheap ten dollar figures, but it’s done well so I don’t have any issues with it. These are, afterall, a couple of dudes in black suits and capes so the arms and legs are shared. The torso’s appear to be remolds as there are obvious differences, like Dracula’s very nicely sculpted and painted medallion and The Phantom’s tie. They both have waistcoats, but Dracula’s hangs down over his pants, whereas Phantom’s does not. And of course, they both sport the same basic black vinyl cape, which should have old school Kenner fans mighty happy. 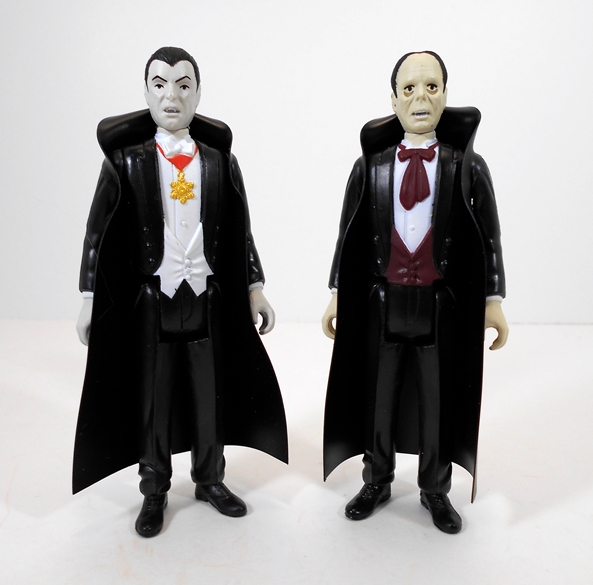 The head sculpts are also quite good and not overly proportioned like on some of the other ReAction figures. Dracula isn’t really the spitting image of Bela Lagosi, but it’s a good generic vampire. Phantom on the other hand, I think they did a pretty nice job on making him look like Chaney in the makeup. 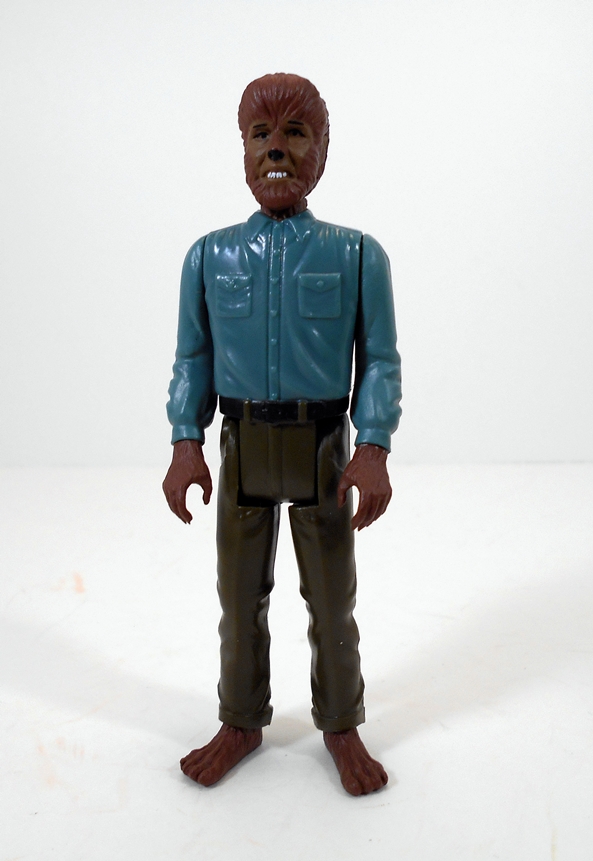 Next, we have The Wolfman and The Mummy and again, Funko did some nice work on this pair. I’d say Wolfman is probably the best sculpt of this wave just because of all the detail they put into his furry hands and feet, the little rumples in his shirt and the creases in his trousers. The head sculpt is pretty damn nice too and all the paint is sharp and clean. 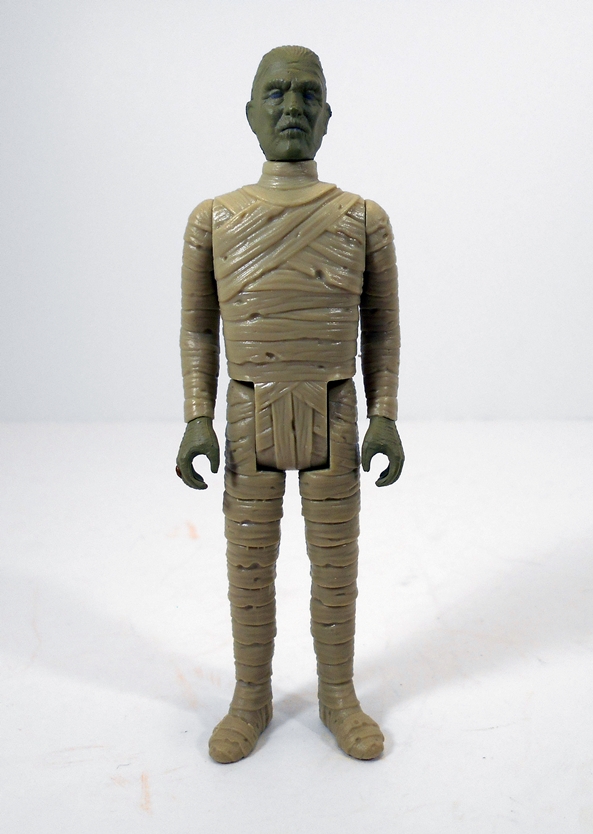 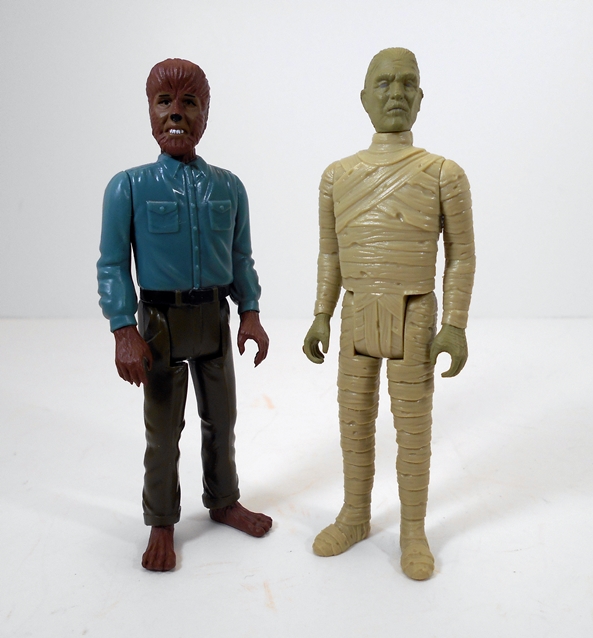 The Mummy also has a lot of detail packed into his sculpt. All the bandages are defined and thre’s little tatters and tears in them to make them look old. There’s not a lot of paintwork on this guy, but then he doesn’t need it. This head sculpt is equally as impressive as Wolfman’s and I’d say if we’re talking likenesses, this one comes pretty damn close to a Boris Karloff in makeup. 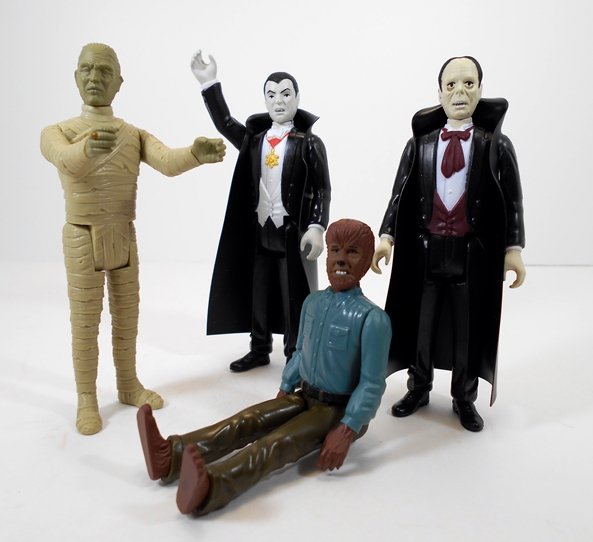 As expected, these figures all have the standard old school five points of articulation. The joints are all nice and tight and the plastic quality feels great. The only drawback might be the total lack of accessories, but then I can’t think of anything to include with these characters anyway. 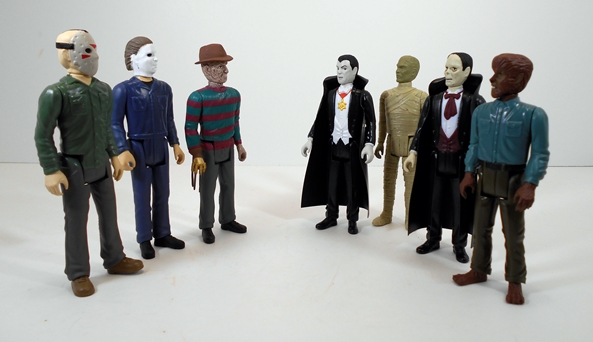 I’ve been really choosey about which ReAction figures I’m buying and so far I’ve made some fairly good choices. Sure, The Rocketeer was a little disappointing, but I was perfectly happy with my 80’s Slashers and these Universal Monsters are absolutely fantastic. They hit the right nostalgia buttons by letting me relive the fun memories of my REMCO figures and these actually look like Funko put a lot of love in them, rather than just crank them out. These guys are proof positive that you can do genuine retro-style figures and not have them look like trash. I’ve already got Series 1 on order so I should be able to swing back and check them out in a week or so.

*If you want to read a great little article on the original REMCO toys, check out Terrordaves.com.