I know what you’re thinking… It’s Transformers Thursday…. where are the eff’ing Change-bots? Why am I looking at a nearly naked dude in a furry diaper? Well, truth be told I’m fresh out of new Transformers to look at so I’m putting Transformers Thursday on a very brief hiatus. But don’t worry. The Transformers Will Return After These Messages! If not next week, TT will definitely be back the following week, depending on how soon it takes for my current Pile of Loot to arrive from BBTS. Yup, there be some robots in there! So instead, allow me to get caught up on my March Matty Collector figures, because it is April already and in just a week or so, I’ll have more figures shipping. I already checked out Huntara and so the figure for today is the 2015 Club Eternia Exclusive and it is Oo-Larr. Truth be told, I have very little to say about this guy, but that should by no means be interpreted as him being a bad figure. It’s just that as someone who is predominantly in this line for the figures and not so much the fiction, a lot of what this figure represents is admittedly lost on me.

As I understand it, Oo-Larr is one of the earliest expressions of the He-Man character in fiction form. That is to say, this was He-Man (often called “Jungle He-Man”) in the original vintage mini-comic. However, in an attempt to blend all corners and variations of the Masters mythos into one bubbling pot of consistency, the idea was put forth that He-Man is a mantle adopted by many different defenders of Eternia over the years. According to the bio on the back of the package, Oo-Larr was the last person to take up the title of He-Man before it passed to Prince Adam. Apparently, this concept has caused many die hard fans of the Masters Mythos to lose their shit. I have absolutely no problem with what Matty is doing here, but again, I’m pretty tough to offend when it comes to the Masters canon. Matty could print that Teela was actually the product of a drunken orgy between Orko, The Sorceress, and all three of Man-E-Faces’ faces and it really wouldn’t bother me at all. I came for the 80’s nostalgia and stayed for the figures. S’all good! But even to those fans that discard the character as Oo-Larr, this is an important release because it’s a version of He-Man that has never been given a figure before. In other words, there’s something in this release that should appeal to different fans on different levels. To me? It’s just a guy in a furry diaper. 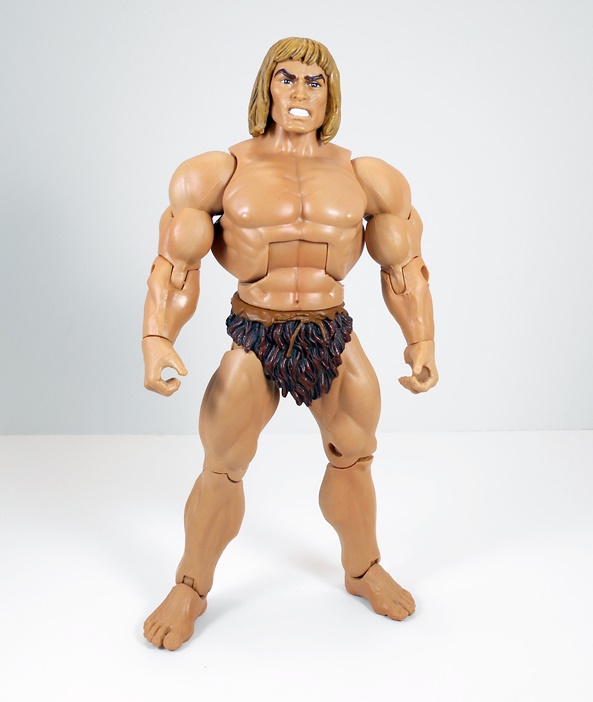 With all that having been said, this is a great looking figure, at least for what it is, and Mattel certainly invested some love and new tooling into it. For the first time we get bare forearms and bare feet as well as what I believe to be a newly sculpted proto-fur-diaper. On the flipside, there’s not a lot more to talk about. Apart from the brown loin cloth there’s no paint apps to speak of. Just a whole lot of… gulp… man flesh. By the plain-ness of this figure alone, I suspect that it might make good fodder for customizers, but considering it did not go up for sale to the general public, it probably won’t be all that easy to get for such nefarious purposes.

Oo-Larr comes with a head that features the longer hair that characterized He-Man in the vintage comic. Again, it’s all about portraying that version of He-Man in figure form and it’s going to mean a lot to many fans. Just not to me. It is a great sculpt, though. There’s more of a savage aspect to it, and if you like that version of the character, you can do a little simple kit-bashing to make the He-Man figure of your dreams.

Speaking of swapping parts, the figure also comes with an alternate head and this one does interest me. It’s a Classics take on the vintage He-Man figure’s head and it’s glorious. I am actually so glad that Mattel included this piece, I’m seriously considering picking up a second He-Man figure from their Essentials Sale just so I can display one with this noggin. It just looks fantastic mounted on top of the regular Classics He-Man.

Articulation here is the same as any male buck in the line. The arms feature rotating hinges in the shoulders, swivels in the biceps and wrists, and hinged elbows. The legs are ball jointed at the hips, hinged at the knees and again at the ankles. Oo-Larr can swivel at the waist, has an ab-crunch hinge in the torso and a ball jointed neck. It’s solid articulation, but the sculpted muscles do impede some of that poseability.

In addition to the extra noggin, Oo-Larr comes with two accessories. First off, you get a really cool looking primitive spear. The head of the weapon is sculpted to look like it was actually fashioned with pressure flaking. I really like this piece a lot and it compliments the prehistoric look of the figure beautifully.

Next up is a sword, which looks pretty advanced when compared to the spear. Nonetheless, It’s a simple, trusty broadsword design with a utilitarian bronze colored handle. I really like getting generic sword designs like this one because I can share it between a whole bunch of different figures. I’m pretty sure Oo-Lar isn’t going to keep this one for long. It just looks too anachronistic in his hands.

Oh yeah, and remember that Ax I mentioned that came with Huntara. Well, that really belongs to Oo-Larr and I think it compliments his spear far better than the sword does. It’s also a wonderfully sculpted piece with weathering on the ax-head and an angled wooden shaft handle.

So, I can’t say I was terribly excited to get this figure, certainly not as much as some fans were, but there’s still some great stuff here if you know the history and are willing to appreciate it. I will say that “Jungle He-Man” is exactly the kind of figure that belongs in a Subscription Exclusive slot like this (far more than a figure like Shadow Weaver with more mass appeal) and it’s nice to see Matty paying tribute to the hardcore fans in what may very well be the last year of the Sub as we know it. While the figure may be a bit bland, both head sculpts are excellent, as are the weapons. As is usually the case, I came into this release no caring very much and came away happy to have it in my collection. I think I’ll probably wind up displaying Oo-Larr along with Vikor, Battleground Teela, and Battle Lion off on their own little section of the shelf.

3 comments on “Masters of the Universe Classics: Oo-Larr (“Jungle He-Man”) by Mattel”