Lest you forgot, I’m doing this whole Star Trek Thang on Wednesdays now, which is convenient because I’ve also picked up another one of DST’s Starships. The sixth entry into my fleet is none other than the NCC-1701-E. First introduced in “First Contact” (because Troi crashed the “D” into a planet in the previous film) this new design really looked amazing on screen and represented a bold new look for the intrepid Starship I’ve known and loved for all my life. The Soverign Class Enterprise boldly traveled through three feature films and this newest release is based on the appearance in “Nemesis.” If memory serves, “Insurrection” and “Nemesis” were the first Star Trek films to rely solely on a CGI model of the Enterprise for exterior shots. This design strikes me more as a mash up between the Constitution Refit and the Intrepid Class (ie Voyager) and sort of passes over the Galaxy Class for design elements. This ship also has a severely minimalist profile when viewed viewed straight on, which I still think is pretty damn cool. The result is a very futuristic looking design of a ship that still retains that intangible nobility that I get from all the Enterprises.

The package is exactly what we’ve been seeing all along. You get an elongated blue window box with the classic “Star Trek” logo and a bunch of text about the ship. There’s a “Try Me” window that lets you get a taste of the electronics. The ship comes fully assembled, all you have to do is put together the two halves of the stand and plug the ball into the socket under the ship. You will need a phillips head screwdriver to undo the battery hatch and switch it from “Try Me” to “Play” in order to get the full effect, but unless this is your first DST Starship, you’ve probably been through all this before. Also included in the box is a replacement battery hatch without the socket for the stand and a folded instruction sheet. With the ship measuring just over 18-inches from the tip of the saucer to the back of the nacelles, it’s every bit as long as The Excelsior, but the design makes it look a lot slighter in every other respect. 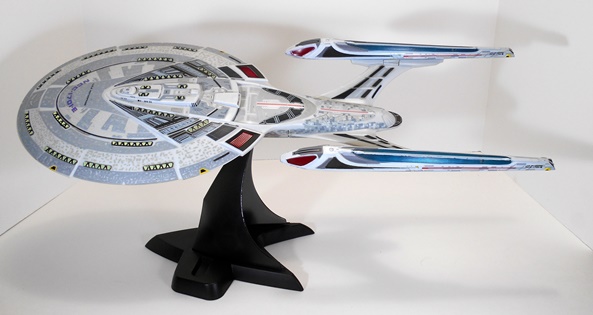 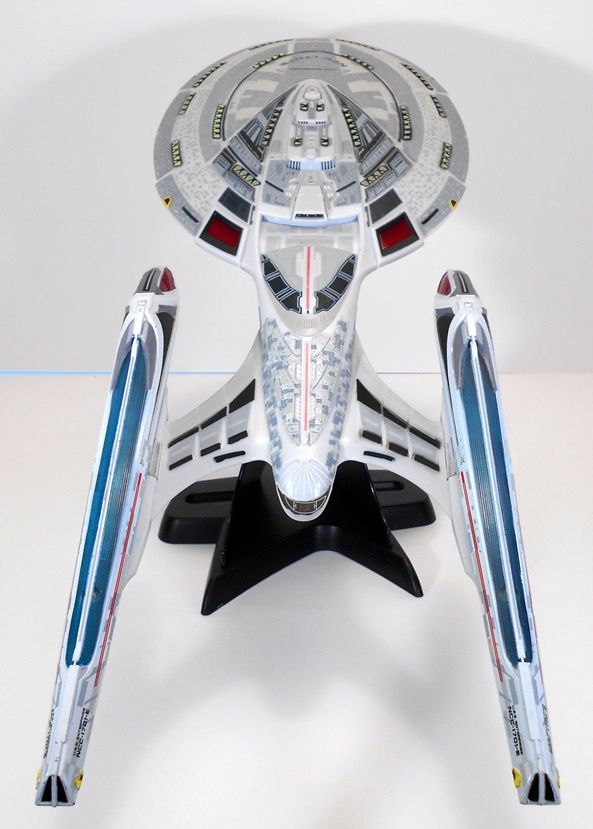 The first thing that struck me about the “E” when I got it out and all set up was how busy the deco is. This is easily the most complex paint job of any ship in my fleet. It certainly reflects the look of the ship on screen, but with the track record of DST on these ships, more detailed paint apps lead to more potential for flubs. That having been said, the paint on mine is fairly decent, but it falls just short of having that professional look. If I bought this ship loose from Ebay not knowing what it was, I would probably assume that it was a kit that was painted by a fairly competant model builder and not a professional factory piece from an officially licensed company. My ship also had some annoying black paint speckled around the top of the primary hull. I was able to remove nearly all of it with some careful razor work, but having to take a razor to my new fifty dollar model is not something I enjoy doing. When all is said and done, probably the weakest paint is the area around the bussard collectors. 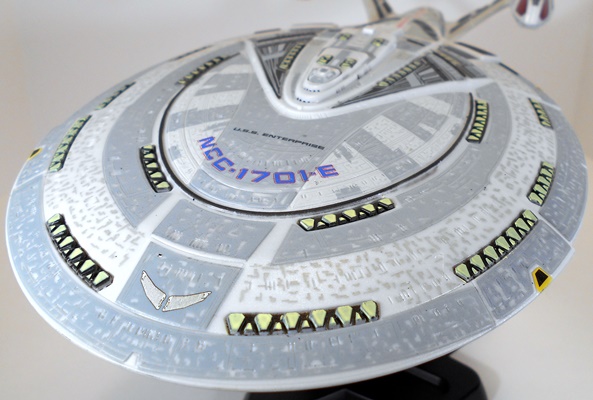 This ship uses a pearlescent plastic, which is somewhat similar to the stuff used for my “Wrath of Khan” Enterprise. While it’s not nearly as light and overall looks much better here, it still allows for some light bleed, which I’ll get to in a just a bit. I do, however, still prefer the denser stuff used for the hulls of the Excelsior and the Enterprise-D. The ship also uses several decals for the registry numbers and “racing” stripes. These are all applied with care and look straight and sharp.

The electronics feature the usual mix of lights and sound. There are lights in the primary hull, which light up bridge and the windows near by as well as the two red impulse engines. This point features a fair amount of light bleeding, which is obvious, but look enough like spot lights on the exterior that I don’t mind it so much. The deflector dish lights up a very bright yellow with virtually no light bleeding at all. Lastly, the bussard collectors on the warp nacelles light up red and the top strips light up blue. Again, you get some light bleeding on the nacelles, mostly around the seams below the red bussard collectors, but the blue nacelle strips look really sharp.The lights only activate when the sound effects are going off and sadly there’s no function to just run the lights. As for the sound effects, here they are…

The sound sampling here feels really generic and features an emphasis on sound effects rather than speech. It’s basically just Picard giving some combat orders and a lot of weapons firing and engine sounds. Granted, “Nemesis” wasn’t a great film, but there were definitely some better quotes that could have been pulled from it. On the other hand, the generic nature of the clips make this ship work for just about any of the last three movies, so I suppose that could be considered a plus.

The stand is slightly better than the standard garbage we’ve been seeing for this line. It has a two-sided triangle post instead of just one like my WoK Enterprise. It does support the ship quite well in a number of positions, but I attribute that to the relatively light weight and good balance of the ship rather than the quality of the stand.

If the scale I use for rating these ships runs from the Awful “Wrath of Khan” Enterprise to the Superb NX Excelsior and Enterprise-D, with most of my other ships falling on upper half of the spectrum, then I would probably place this version of the Enterprise-E exactly midway along the line. The only real QC issues on this piece is the black paint spray and I’ve managed to fix most of that. Yes, the paint around the bussard collectors could be better, but it doesn’t sink to the depths of some of the stuff showcased on the WoK Enterprise. Everything else about this ship (the plastic, paint quality, lighting and sound) I would categorize as quite good, but not quite exceptional. At around $30-35 I would have been a lot more satisfied with this purchase, but at $50 it feels rather steep for the quality. Nonetheless, I’m happy to add The Enterprise-E to my Starship Legends shelf and it should be only a matter of time before I break down and pick up the Enterprise-B.