Few things have riled my OCD like Warbotron naming their initial combiner Warbotron. In the name of sanity I couldn’t call today’s Feature “Warbotron by Warbotron.” And it gets even more annoying now that the company is on to other combiners. I’m starting off with a petty rant like this because I have precious little else to rant about when looking at this amazing Third-Party homage to Bruticus. Yes, there were a few initial bumps along the way, but once I got over the hump I beheld this amazing behemoth on my desk and I did gaze upon it in awe…

Hell yeah, that’s Bruticus all right and man, do I love this thing! Much about the combined mode speaks for itself. At about 18-inches tall, he’s a heavy beast of a figure and he’s really nicely proportioned. I know there was some question about the colors being too bright on the individual bots, but I think the deco looks great as the gestalt. Even from the back he looks pretty clean. 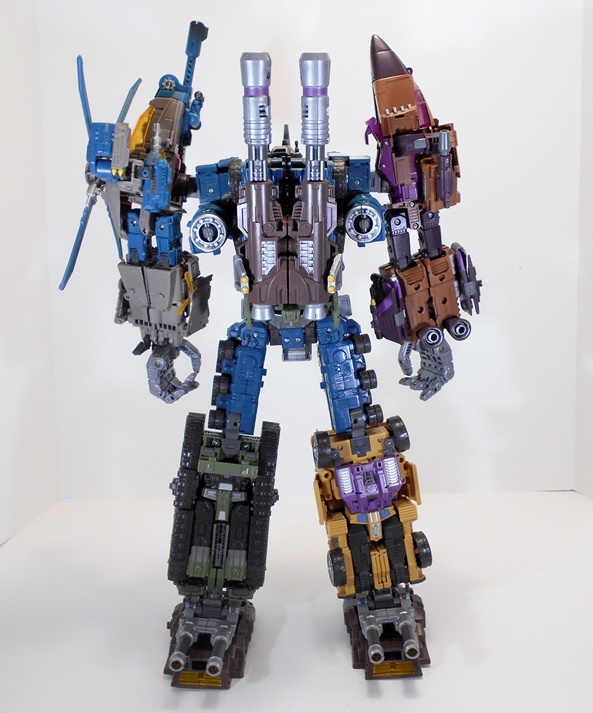 So, let’s talk a bit about putting him together. The only real hurdle I had was in getting Fierce Attack into the torso mode and that’s just because I couldn’t get the left shoulder assembly to lock in straight. I played around with it for like ten minutes before it suddenly just seemed to right itself. Maybe coincidently (or maybe not) that happens to be the shoulder on the robot mode that’s really tight, but hey alls well that ends well. I like that there are little arms in the back that swing out and lock the shoulder assemblies into place. Boy, Hasbro’s Combiner Wars Menasor could have used that very thing. Sure, you could argue that using Fierce Attack’s trailer to make the upper legs and pelvis is parts forming blasphemy, but I don’t care. I’m fine with some degree of it in combiners and at least it serves a purpose as part of the truck. Apart from getting the shoulder right, getting to the torso was easy-peasy as is most of the rest of the combiner modes.

Sly Strike and Heavy Noisy are definitely the easiest, especially if you’re going from their alt modes. You’re basically just parting the backs to get the feet pegged in and then folding down the fronts to get the combiner sockets up and ready. Plugging them combiner pegs in below the knees is a bit tricky. They have tabs that lock them into place, and I had to push them with a screwdriver to get them inserted and locked. The same method (and a fair amount of force) was needed to get them out. Fortunately, these are sturdy toys and I wasn’t too worried about breaking anything. The feet form a stable foundation for this beast to stand on and the ankle joints are strong and allow for lateral rockers as well as swivels. Sly holds his perfectly, but every now and then Heavy Noisy tried to drop his. The heavy ratchet joints in the ankles are just stronger than the connection where the ankle post pegs into the legs, so it’s a good idea to hold the figure by the ankle when adjusting the feet. I’ve had Heavy Noisey’s cupola drop off once while posing him and Sly’s side panels sometimes pop out (as evidenced in the above photo), but even these are uncommon occurrences and easily fixed with some adjustments after posing.

Air Burst and Whirlwind’s arm modes, on the other hand, are a little less sure of themselves. They’re basically made up from a half-transformed stage between robot and alt mode. In reality these are very similar to the configuration used on Hasbro’s current crop of combiner arms, complete with the twin bars joining bicep to forearm. The robots arms on either figure don’t really peg in anywhere and that’s a little annoying, but that didn’t seem to be a problem when I was playing with him at all. The hands hold in place very well and the combiner ports on the arms are not as difficult to work with as the legs. The only other quibble I have is that I didn’t have anywhere to go with Air Burst’s thruster packs in the arm mode. I should also point out that I have not yet done the torso swap for Air Burst, which means that the hips (or in this case Warbotron’s right elbow) doesn’t ratchet like Whirlwind does. That’s why in the pictures where he’s holding the gun, my Warbotron is a lefty. Otherwise posing the arms feels great and those locking bars behind the shoulders keep everything tight and together.

The head sculpt is awesome. It’s very G1 Bruticus and it’s made by flipping a helmet and mask right over Fierce Attack’s head. You still get a full range of ball joint movement in the neck. The horn can also be positioned either straight up or angled forward. I also love the fact that they provided a familiar shaped plate on the chest just in case you wanted to put some kind of… oh, I don’t know… maybe a faction sticker there?

I’ve already hit on some of the particular points of articulation in the arms and legs, but the overall poseability here is great. The crotch plate is hinged to allow for unimpeded forward movement at the hips. With heavy ratchets in the hips, ankles, and knees, Warby’s legs can take his substantial weight in a variety of action poses without too much fear of toppling over and never sliding into the splits in wide stances. In fact, the only time I had issues getting him to stand up was because Heavy Noisy dropped his ankle connection a couple of times. Once I started posing the ankles with a firm grip on the bottom of the leg that wasn’t an issue anymore. 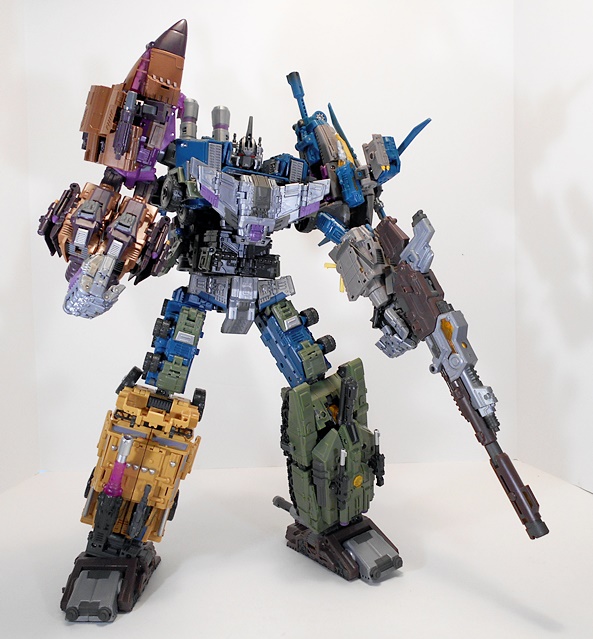 Naturally, Warbotron can wield that massive gun that came with Fierce Attack and he holds it beautifully. There are pegs on the inside of his hand to secure it and each of his multi-hinged digits can wrap around the grip tightly. Again, if you want him to hold it aloft in his right hand, you’ll have to invest the time in the torso swap for Air Burst. From what I’ve seen it’s not a big deal, but I didn’t want to hold up this Feature until I had time to do it, and fair is fair, I like to give my impressions of a figure as he ships and not after tinkering on the buyer’s end. Nonetheless, even as big and heavy as the gun is, the ratcheting elbows allow him to hold it directly out in a firing position. Not too shabby. 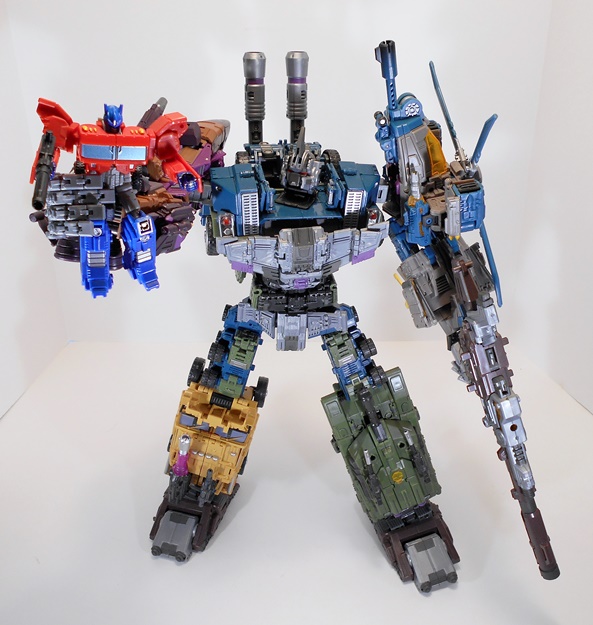 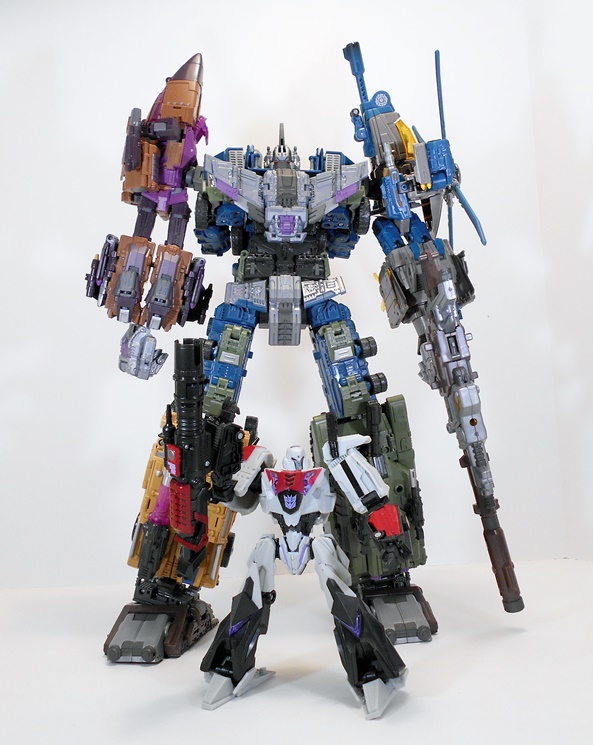 For me a combiner team is as much about the team of individual robots as it is the combiner, particularly since I display most of these teams as their individual robots. That having been said, Warbotron lives up to the all the hype and excitement that got me to start down this expensive path slightly over a year ago. He’s well thought out (Air Burst’s torso not withstanding!), wonderfully proportioned, and generally fun to play with. He scales very well with the Generations Deluxes and if you want to cheat on scale a little, it’s fun to have him interact with the Legends. Of course, that leads us to the inevitable question: With MMC’s Feral Rex reigning supreme as my favorite Third-Party combiner, does Warbotron get to knock him off his throne? Gosh, that’s a tough one. It’s really, really close. I have more nostalgia for Bruticus than I do Predaking but both are such impressive looking figures I don’t know that I could definitively pick one over the other. I guess if I had to make a decision I would give the nod to Predaking, but that would be mostly because the Feral Cons were such a well-rounded package whereas Warbotron had a few hiccups along the way. In the end, let’s just say it’s really, really close and that both are likely to remain the best versions of these gestalts available (official or otherwise) for a long while.