Last year Matty Collector creeped me out with sheer delight when they released Modulok, a figure that came with enough pieces to create your own Human Centipede monstrosity, or at least as close as I ever want to get. This year we get the robotic equivalent of the same idea with Multi-Bot, the bizarre member of the Evil Horde, which can also interchange parts and challenges you to create whatever your imagination can muster up. With July’s figures already landing on my doorstep, I’m already woefully behind on this guy, so let’s jump right in and take a look…

Multi-Bot comes in an enclosed box, just like Modulok. It’s colorful and gives you a good idea of what lies inside. Unfortunately, Matty still hasn’t learned the way of sealing boxes with a piece of cello tape so I had to carefully work one of the glued flaps open. I don’t often keep my MOTUC packages, but with all the extra parts involved, these guys are an exception to the rule.

Inside the box, you get a tray with Multi-Bot’s two humanoid forms surrounded by a bunch of other parts, which include two weapons, an extra pair of legs, and a bunch of combiner pieces. 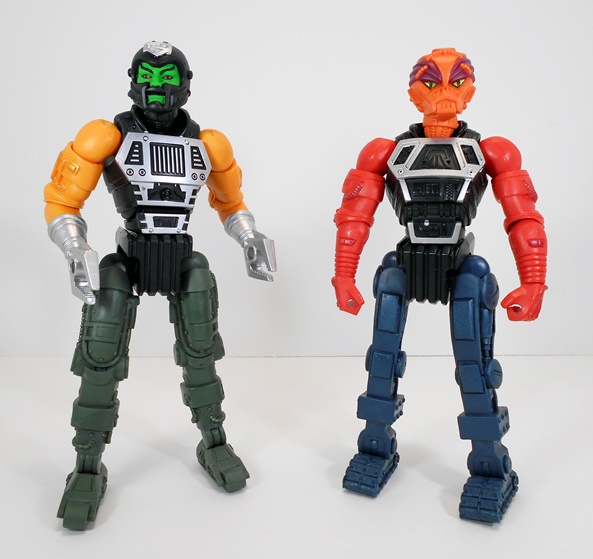 And they are an odd pair indeed. Why does the Masters world love to put monster heads on robots so much? Who cares… it’s a glorious practice. These guys look exactly like some crude drawing I might have done as a kid on my Trapper Keeper back in the 80’s and that is one of the many things I love so much about this line. It’s a child’s fever dream of monsters and robots and swords and sorcery and lasers and castles and giant cats. The coloring features a nice mix of drab green and blue with some bright orange and yellow thrown in. The torsos are black with some sharp silver paint to pick out the details.

Individually, these guys actually have more articulation than a regular MOTUC figure. There are rotating hinges in the shoulders, elbows, hips, and knees. There are swivels in the biceps. The wrists swivel and the ankles are hinged. They can rotate at the waists, have ab crunches in the torsos and ball joints in the ankles. The guns appear to be recolors of the ones that came with Modulok and they can still be combined to form a larger weapon. Of course, the real fun comes when you break these guys totally down and start using your imagination…

With a total of three pairs of legs, two pairs of arms, a couple heads and torsos, and no less than fourteen different connection pieces, the real draw of this set is tinkering and seeing what you can come up with. The system works exactly the same as the one used for Modulok and the two figures are indeed compatible for even bigger and more bizarre creations.

Last year, Modulok landed prominently on my Favorites List for being such an amazingly fun toy, so it’s no surprise that Multi-Bot has become a fast favorite of mine in this year’s Club offerings. Sure, he’s more of the same, but if you missed out on getting Modulok, you can get the same play pattern here and if you already have Modulok, well tossing both of these figures into a bin and mixing up the parts just makes for a total blast. Just be ready to do some painful sorting when you’re all done and ready to put them away!

2 comments on “Masters of the Univere Classics: Multi-Bot by Mattel”