A couple of weeks back, I ducked into a Ross for the first time in ages to see what toys they had kicking around. They’re usually good for cheap Transformers every now and then and while they appeared to be picked pretty clean, I did manage to grab some Hero Mashers as well as Brainstorm, one of the few Generations figures I failed to pick up when he was out at the regular stores, mainly because I was quite satisfied with my Fansproject Smart Robin. But for ten bucks? Pfft, why not? 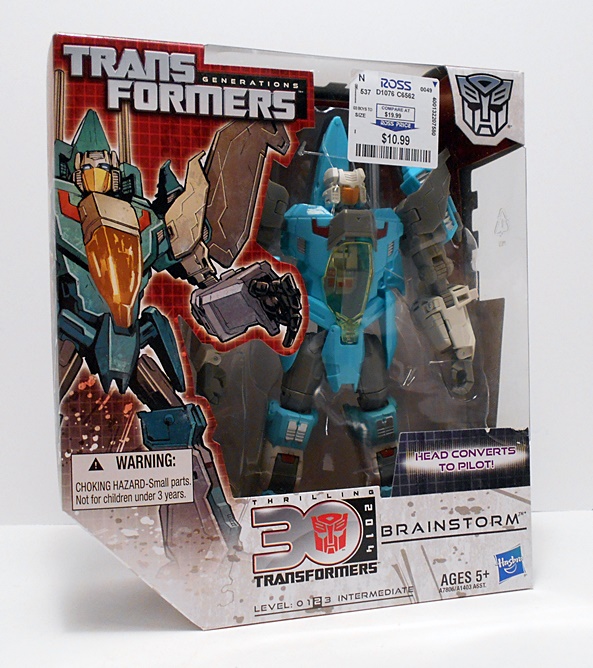 While the Combiner Wars packaging has grown on me, this Generation stuff was where it was at. Nostalgic G1 grid pattern? Check! Awesome character art? You got it. I love this deco so much. Brainstorm is packaged in his robot mode, but as usual, let’s start with his alt mode… 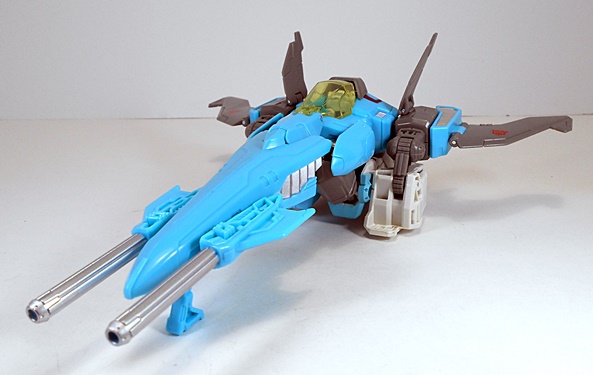 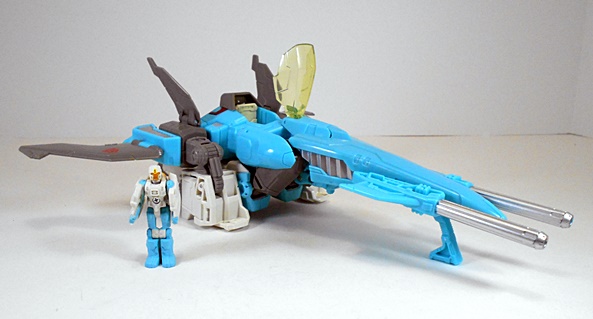 Brainstorm is a single seater starfighter, and it’s a passable design from certain angles. From the front, he’s kind of sleek with a nice set of twin blasters mounted on the nose, some stylishly angled wings, and a flip up canopy for his little robot pilot. 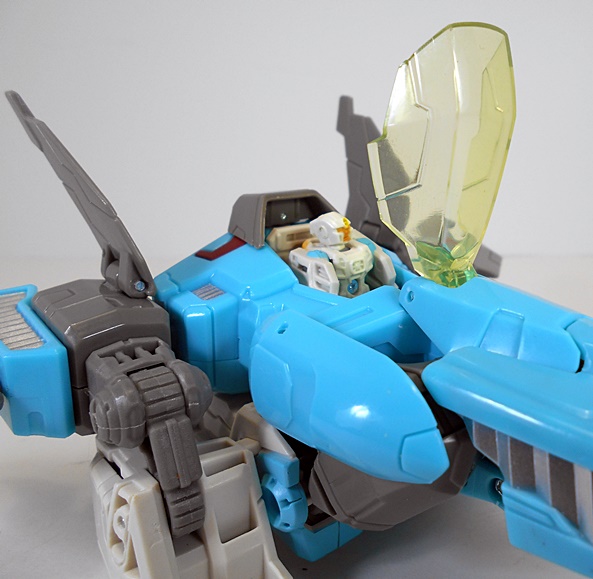 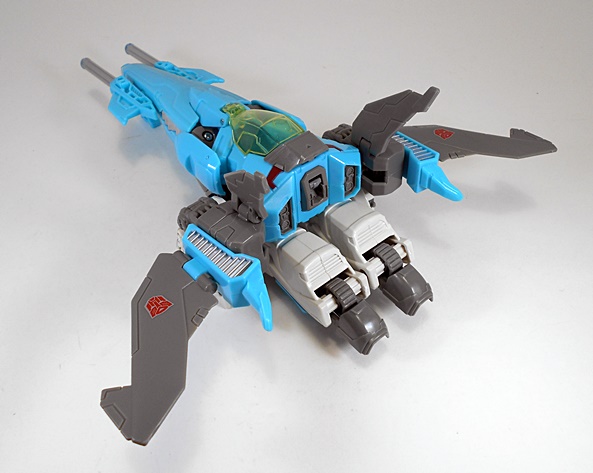 Unfortunately, as a whole package, this alt mode isn’t very good. I usually like to try changing my Transformers for the first time without the instructions, and I’m usually successful at it. Here, I was convinced I was doing something wrong and that was because the box doesn’t show the alt mode from the back. Once I looked at the instructions, I was able to see that I wasn’t doing anything wrong. It really is supposed to look like that. It looks unfinished, like it’s missing the top back of the ship. There’s no clever engineering or complexity here, it’s just the legs and arms folded back and that’s exactly what it looks like. You could argue that the original G1 toy transformed more or less the same, and I would agree. But then I think the original toy had an all around more solid looking alt mode. 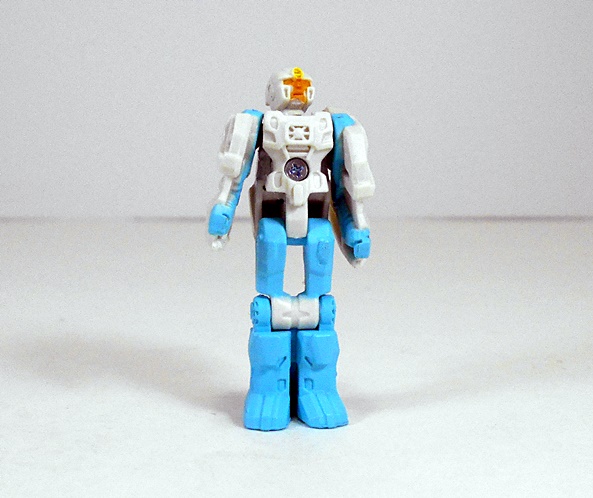 Brainstorm’s little pilot, let’s just call him Arcana has a similar problem to his partner’s alt mode. He looks good from the front, but turn him a little bit and you realize he’s just an upside down head on legs. I’d also argue here that the original Arcana toy looked better than this in robot mode. That’s not just nostalgia talking. I’m looking at a picture of him right now. 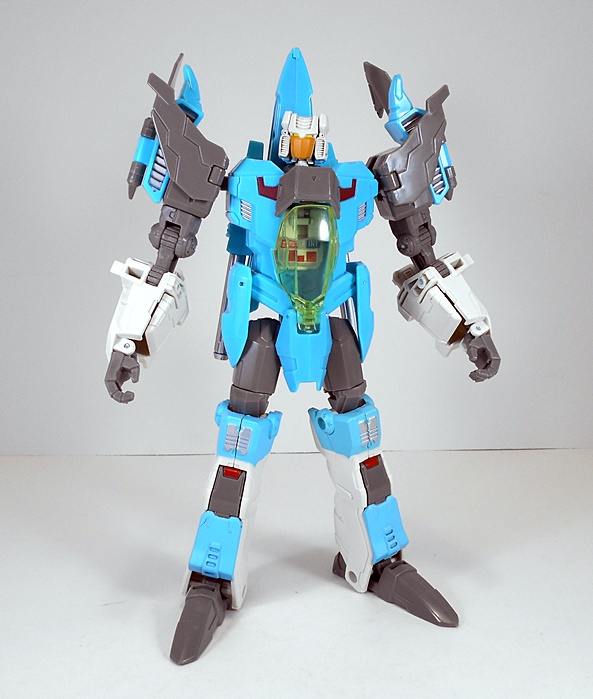 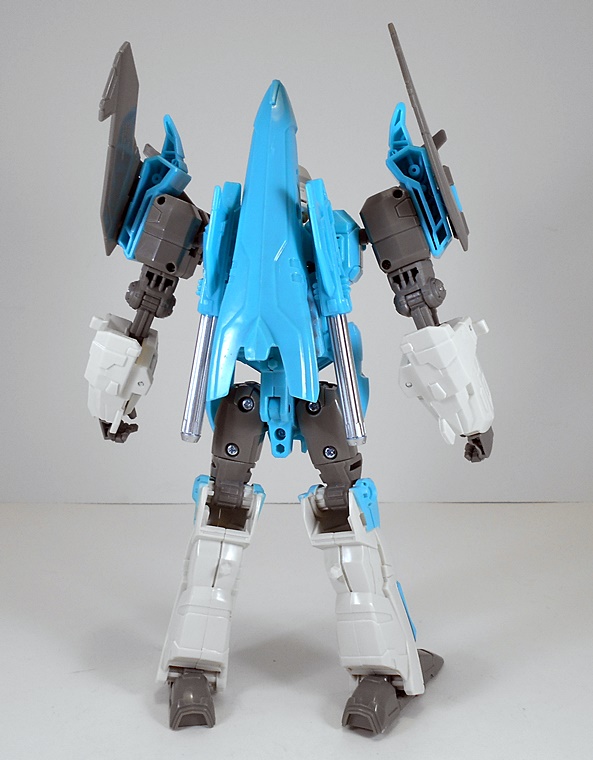 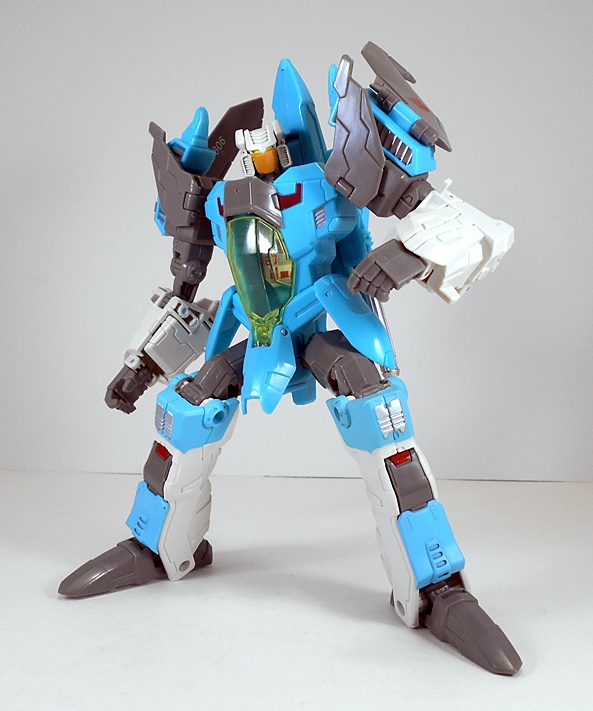 In robot mode, it’s easy to see that the designers were working from this mode and going backwards. It shows because that iffy alt mode was sacrificed to deliver this damn great looking robot. Oh, I’m not terribly fond of the way the ungainly shoulder wings jut off to the sides, but they can be angled back or swept back all the way to fix that. The cockpit in the chest and the great proportions make for a beautifully bad-ass design. The coloring is pretty much the same in either mode with a pleasing mix of light blue, white, and gray plastics. The deco is rounded out with a little silver and red paint for trim and yellow and orange paint on the face. 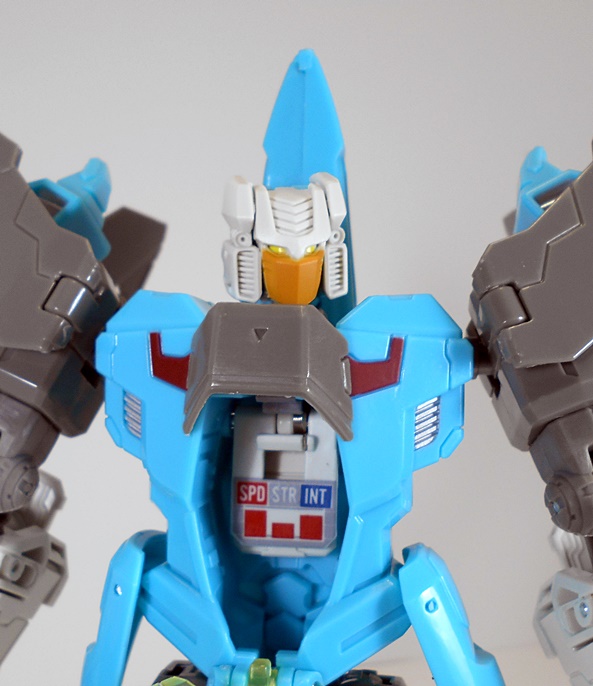 Plugging Arcana into the neck causes the cockpit seat to flip down to display his stats just like in the old days. And yes, this noggin fixes the only complaint I had about my Fansproject Smart Robin. Mouth plate! 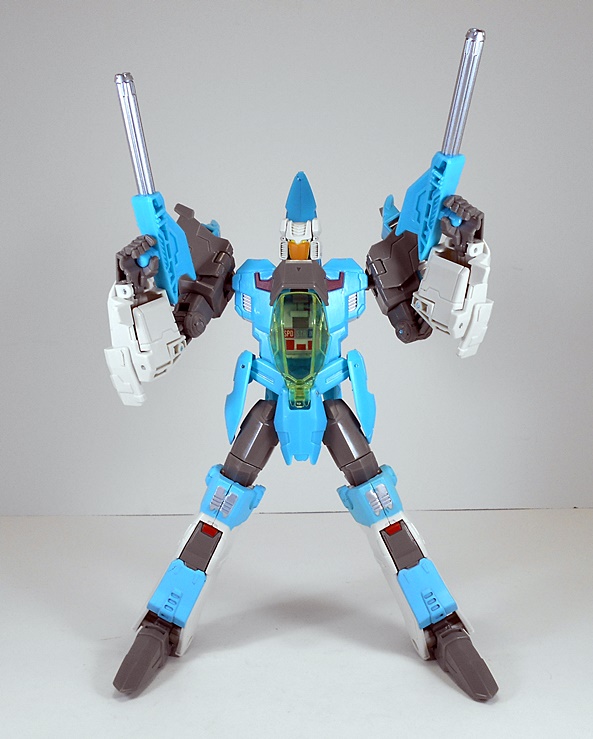 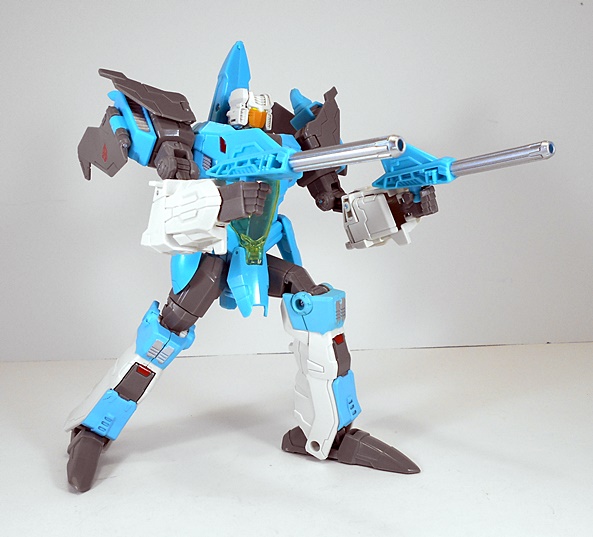 Brainstorm’s twin nose cannons are best detached during transformation and they can be wielded as dual handguns or, much like Smart Robin, they can be stored on his back, which is pretty cool. 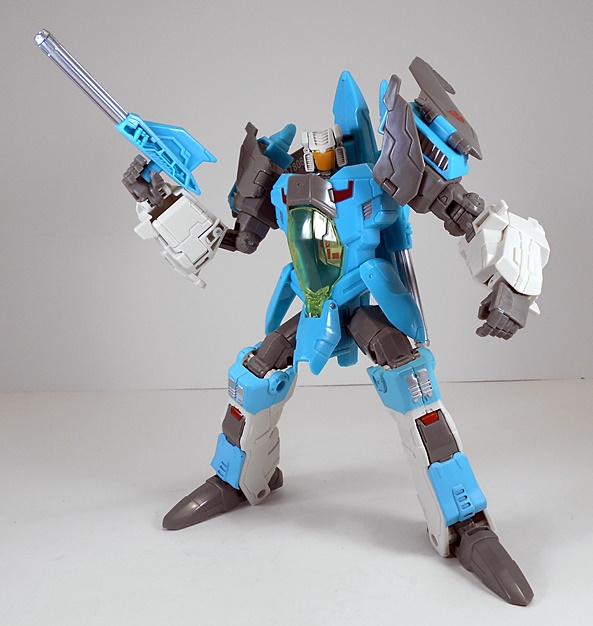 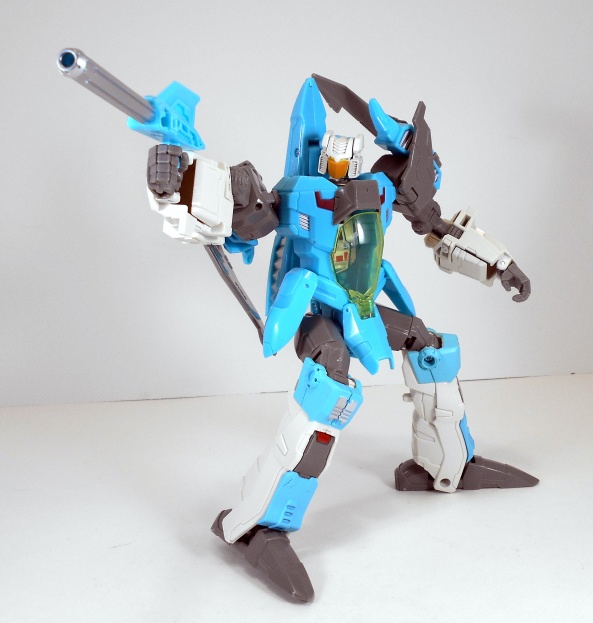 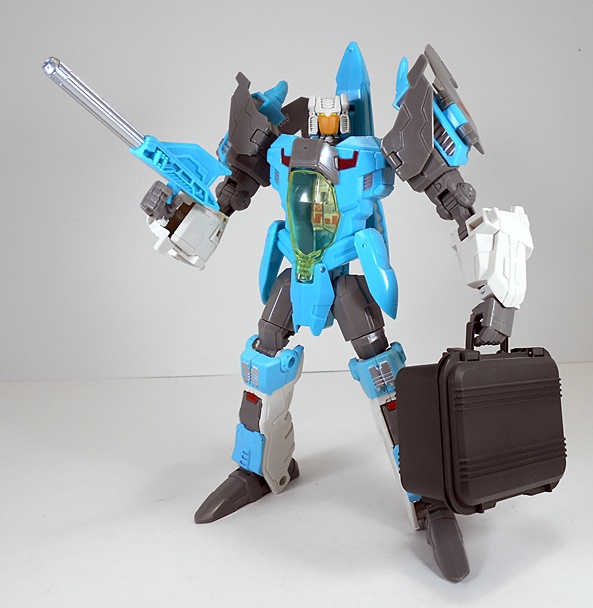 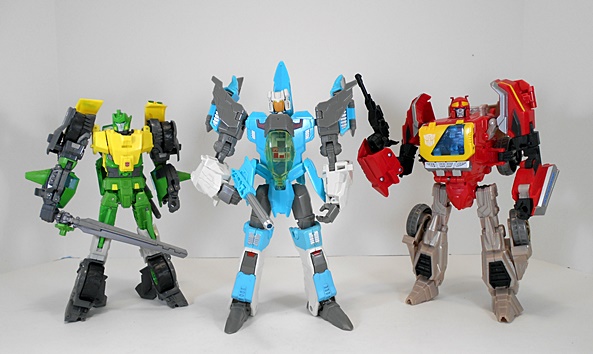 Despite a lot of bitching, I wouldn’t say I was disappointed with this figure. The alt mode definitely shows a lot less thought than I’m used to seeing Hasbro put into their changebots, especially for a Voyager Class figure, but with a robot mode this good looking, it’s hard for me to do anything but love this guy. I’m still going to look to Smart Robin as an all around better designed figure, but Brainstorm sure looks nice standing alongside some of the other Voyager Class Generations Autobots on my shelf.