Remember when the first Princess of Power figures were released as part of the Club Eternia Sub and a lot of collectors lost their minds? Well that was a long time ago. Since then every couple of months has brought us another of these now established ladies and that’s fine by me because I think they’ve been some of the brighter spots of the whole shebang. Let’s see if today’s figure continues that trend with Perfuma, “Brave Warrior Working the Fragrance Desk at Macy’s!”

Nah, her real tagline is “Scent-Sational Flower Maiden” and ugh, I liked mine better. Even in a line that has no problems letting the bad puns fly, this one just goes too far. Her real name is Tara and her magical power is apparently being able to make people fall asleep by smelling her. In Filmation lore she has the power to force Horde Troopers to form a conga line and remain totally oblivious to personal danger. There’s nothing else to say about the packaging. We’ve seen it before and it has a “Princess of Power” sticker on the bubble. It’ll likely be the last time we see that sticker on a new release, but I’ve got some back tracking to do on some figures, so we’ll see it again here. Anyway, let’s open her up and…

Woah… So, Perfuma is actually perfumed and I honestly did not expect that. I’m not sure why I didn’t, since making figures stink has been a MOTU gimmick before with Stinkor and Moss Man. I guess I just didn’t get the memo this time. The smell actually isn’t that strong, and it’s kind of nice, but I don’t get to talk about a figure’s smell too often so I thought I’d lead with it. I may lock her in a Ziploc container with Stinkor and Moss Man and let them fight it out to see who wins in the battle of the stinks. As one might expect, Perfuma features a very flowery themed outfit. She has a rose-colored dress with a couple of sculpted roses on her belt, green leggings and rose-colored boots. Even the dress itself kind of looks like an overturned rose. The whole ensemble is capped off with a pair of green arm bracers and some ivy-like trim around her dress. She’s actually one of the more distinctive looking ladies in The Great Rebellion. Let’s face it, if you’re a dude collecting this line, you’ve got to be pretty comfortable in your masculinity to have this figure on your shelf. Then again, if you’ve got Peek-A-Blue on display, you’ve already crossed that bridge. 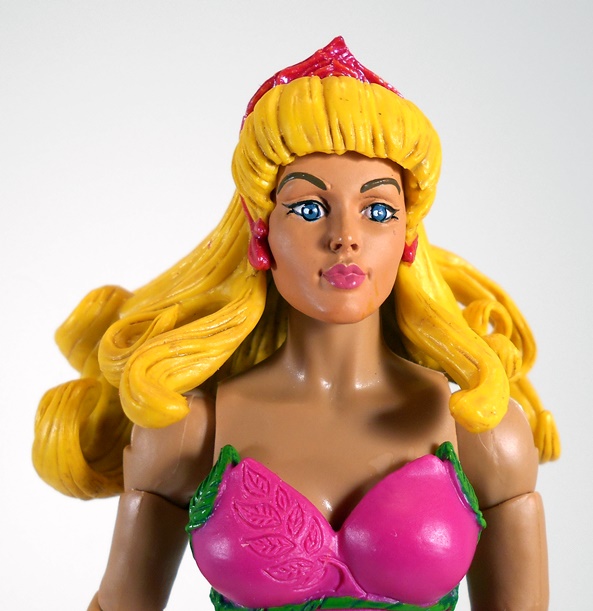 The head sculpt is pretty distinctive too. Perfuma escapes that certain “sameness” that I tend to see in a lot of the ladies’ portraits. This one looks different and maybe just a tad more Filmation than the rest. Or maybe that’s just me. It’s not one of my favorites, and I think that has a lot to do with the eyes. The paint is rather heavy handed. It also looks like she’s been to the Etherian Collagen Clinic for some injections in her lips. Perfuma has a wild mane of yellow hair, which is sculpted in a very pliable plastic that helps her head turn more freely. It does, however, look a little dirty, like she’s been rolling around in the flower beds. There’s also some unfortunate mold flashing on the back of her hair. 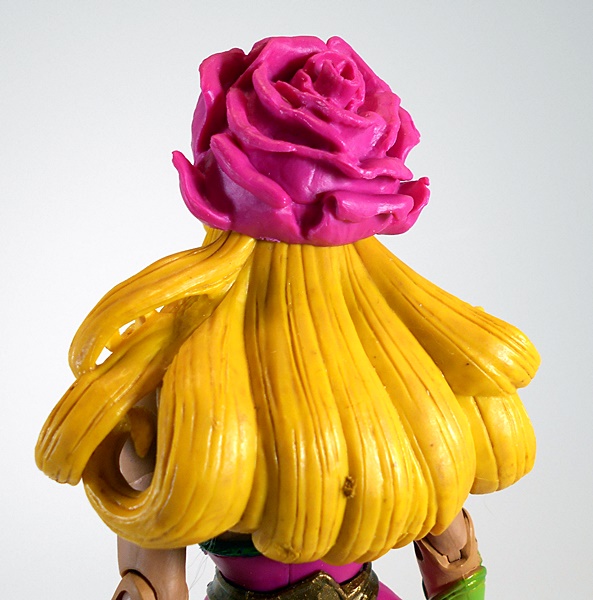 In keeping the whole flower obsession thing going, Perfuma also has a giant flower that she can wear as a hat. It just clips right onto the top her head and stays on really well. I’m kind of surprised they didn’t just make this part of the sculpt, as I can’t imagine wanting to display her without it.  Articulation is totally predictable for the PoP ladies, but let’s run through it anyway, one last time. The arms have rotating hinges in the shoulders, hinges in the elbows, and swivels in the biceps and wrists. The legs are ball jointed at the hips, hinged at the knees, have swivels at the hips, and the ankles are hinged. She can swivel at the waist and has a ball jointed head.

In addition to her flower hat, Perfuma comes with a flower gun and a shield. The gun is so ridiculous it’s almost awesome. Unfortunately, she can’t really do anything with it because it weighs a ton and her joints can’t support the weight. There’s one sweet spot where I can get her to hold it up for a few moments, providing nobody breathes on or looks directly at the figure. As for the shield, you guessed it! It’s just a repaint of the same shield we’ve been getting all along. This time it’s green with a green crystal.

Perfuma is a pretty cool figure, although I’ll confess she’s not among my favorites of the Princess of Power offerings. In fact, I’d rank her low to middle on that spectrum. Of course that comment shouldn’t weigh too heavily on her flowery head because with the exception of Double-Mischief *spits on the floor*, I love every PoP figure on my shelf (Yes, even The Star Sisters) so Perfuma’s got nothing to be ashamed of. And so, if I’m not mistaken, Perfuma should wrap up the PoP figures for the Masters Classics line, and not a moment too soon, since we’re closing in on the line’s final figures and what will sort of be an end of an era. But I’ll have more to say on that next month when I look at the last offerings. In the meantime, I still have a couple of figures to look at from October’s offerings, and I’ll try to get to them next week.

2 comments on “Masters of the Universe Classics: Perfuma by Mattel”