It’s Marvel Monday again, folks, and it’s also time to start a brand new wave of Marvel Legends! Woo Hoo! I’ll warn you/apologize ahead of time that the Jameson is flowing freely today. This time I’m working my way up to the BAF Hulkbuster, one figure at a time and I’m starting off the wave with Doctor Strange! Can I just take this time to say how much I’m looking forward to the Doctor Strange movie? Yeah, Star Trek: Into Darkness almost killed Cumberbatch for me, but it wasn’t his fault. He just took a cartload of money and they handed him a “script.” See, I used quotes around the word script because it was a piece of shit. Hahaha… Seriously, I HATE THAT MOVIE!!! No, but I’m really hoping that Doctor Strange will redeem him for me. He’s perfect for the role and I’ve all but given up on the theory that Disney can make a bad Marvel flick or at least one that I don’t like.

Of course, this is the comic version of the character, so please excuse my little detour about the movie. The package is unchanged from the last Wave I looked at. It’s still a fairly compact window box, which is relatively collector friendly. In this case, the package weighs a ton because of the gigantic Hulkbuster leg, which I swear uses more plastic than the figure itself. You’ll also note that Strange’s name doesn’t appear on the front of the package, instead it’s just the generic moniker, “Marvel Hereoes.” Wow, that could apply to almost anyone. Yes, this is another case of a variant swap-out within the slot and in this case the other figure is The Vision. I don’t get why Hasbro does this anymore seeing as: a) Both figures are included in the case, and b) Each figure comes with a unique BAF part. Craziness! Anyway, let’s go ahead and commune with The Eye of Agamotto and free Strange from his prison.

Yes, this is the modern version of the character’s look and one that I’m not entirely familiar with. The last time I encountered Doctor Strange in my comic reading was back in issue #21 of Deadpool and he was still grasping at some of the vestiges of his more classic look. Here he’s given up the high collar and cape and is sporting something of a more streamlined “super hero” style costume. It’s convenient for Hasbro as they were able to get away with a repainted buck and adding just a sculpted “skirt” piece and new forearms. The new black and maroon deco gives him a far more sinister look. I won’t say I don’t like it, but I definitely prefer his older costume. This figure is also a tad more buff than I’m used to seeing him. The head sculpt is fantastic. He looks great and the paint is all nice and clean, even around the mustache. 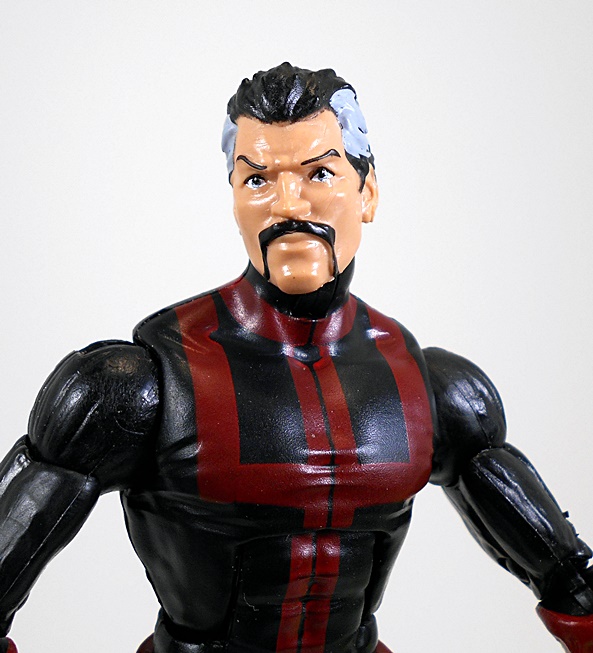 The articulation is solid and about what I’ve come to expect from this line. The arms have rotating hinges at the shoulders and wrists. The elbows are double jointed and there are swivels in the biceps. The legs are ball jointed at the hips with swivels in the thighs and tops of the boots. The knees are double hinged and the ankles are hinged with lateral rockers. The waist swivels, there’s an ab crunch hinge in the torso and the neck has both a hinge and a ball joint.

In addition to the mammoth BAF part, Strange comes with two magic effects parts. These are the same pieces that came with Scarlet Witch a little while back only now cast in a neon green plastic. I liked these pieces a lot back then and still dig them a lot now. Unfortunately, Strange’s hands look more like Spider-Man thwipping hands than spell-casting hands to me. But I suppose they get the job done. 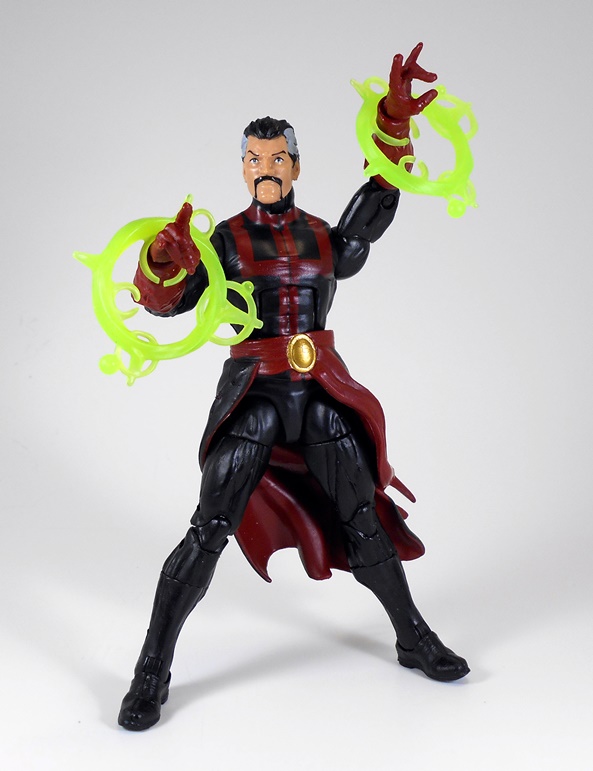 Yes, if I were given my druthers I would have had classic Strange in this assortment, but Marvel is obviously more interested in promoting their current books and current looks. I’m OK with that. This more sinister version of Strange works for me too and Hasbro did a fine job with the figure. The new sculpted bits look good and the paint is sharp and clean. The articulation is solid and it’s nice to see a return of the magic effects parts. And since my old Legends Doctor Strange disappeared long ago, I’m very happy to have the character represented on my Legends shelf again. Besides, for Classic Strange I can always look to my Marvel Universe figure.