Damn these ridiculous things! I bought a few Doctor Who and Fallout Pop!s last year and swore it wasn’t going to be a gateway into anything, and now I’ve got more of these things then I’d care to admit. I’ve decided that the weekend would be the best time for me to start looking at these things, as well as some Disney Infinity figures and other items in my collection not worthy of occupying a regular weekday slot, so here we go… 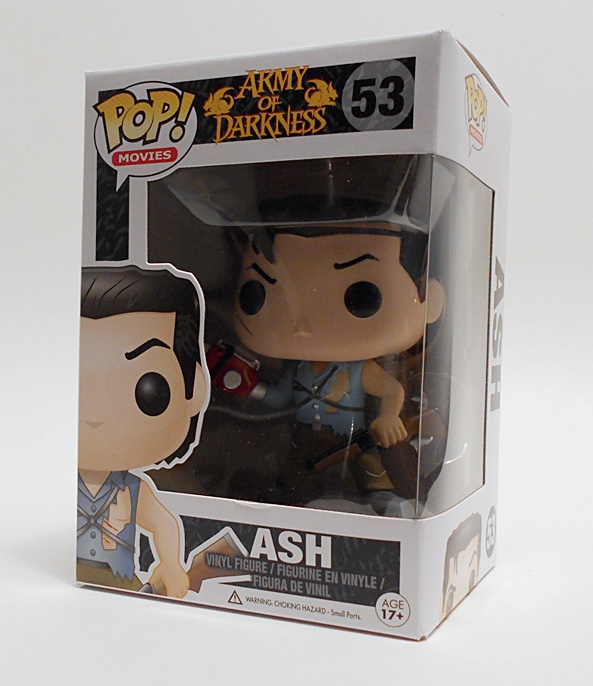 Here is the insidious little box that called to me from the shelf. Ash is #53 of what I’m assuming is their movie series. But Funko is so prolific with these things that any time I see a number less than 10,000 on these things I call foul. I’ve been keeping the boxes for now, but I can foresee a day when I will have Totes with hundreds of loose Pop!s just spilled into them. Someone, please stop me before that plays out. 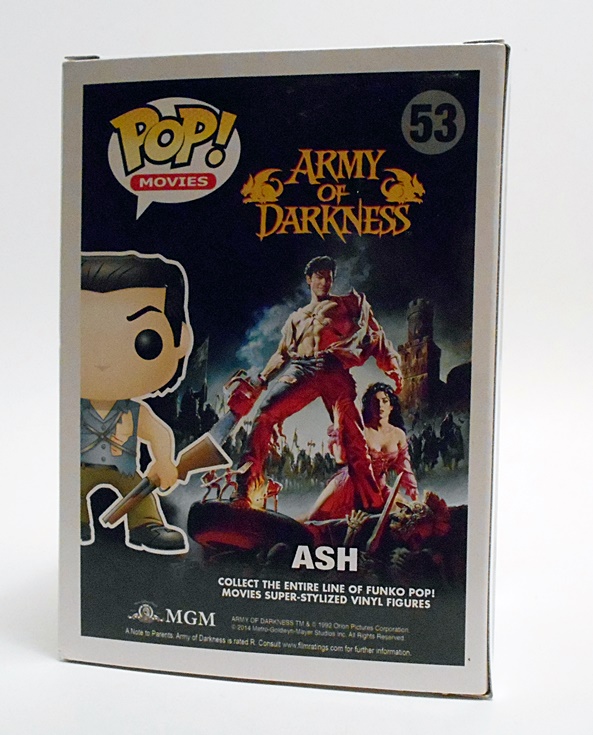 The back panel is odd, because instead of showing you what other POP!s are out there to buy it just has a poster from the film. Man, that was a great poster! Now, I realize that this particular Pop! is from Army of Darkness, but the real reason I wanted to look at Ash today was to give me a platform to talk about the TV Series, Ash Vs Evil Dead, which just wrapped up it’s first season and… HOLY SHIT, RIGHT??? This was a series that they could have totally phoned in and fans would have still eaten it up with a Candarian spoon. But the creators didn’t do that. No, instead they delivered what has got to be some of the most unique TV ever produced. This show is beyond a love letter to the fans. It’s a full on blow job letter to the fans. It’s just absolutely incredible and impossible and I can’t believe something like this was actually made and put on television. Needless to say, I loved it and can’t wait for more. OK, back to the damn Pop!

One of the thing that impresses me is the way Funko is able to take just one aspect of a character’s appearance and work it into the generic giant Pop! head and make the character recognizable. Here it’s Ash’s cowlick. The scar is neat too, as is the one raised eyebrow. I almost wish they had glued a chin on the bottom of the face, but that would have been going beyond the Pop! aesthetic so I can understand why they didn’t. 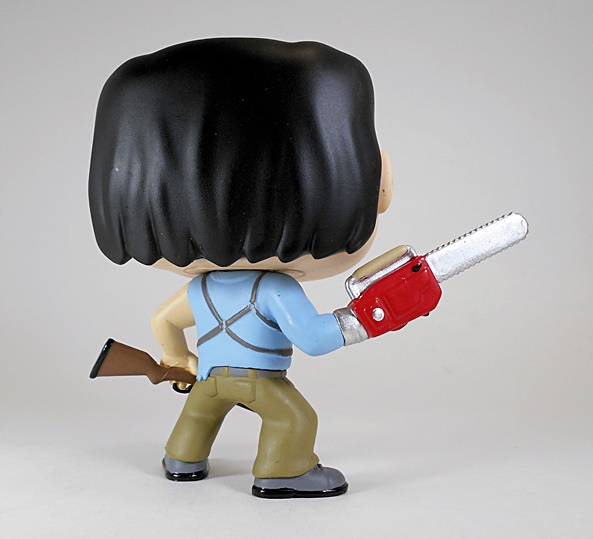 Now, I’m not saying I would recognize this head as Bruce Campbell by itself, but that’s where the body comes in and Funko did a nice job here. You get the torn blue shirt, the chest straps, the boomstick, and the chainsaw hand and all are produced quite well for this scale and scope. There’s just something about a figure this cute holding murder implements that makes me happy. The paint here is not bad at all. There’s a stray fleck of black here and there, but otherwise it’s pretty neat and the brushed steel look of the chainsaw blade is actually quite good.

So, I originally told myself just Fallout and Doctor Who (and yes, I have more of those to look at), but the problem here is that after you buy your first Pop! you start to notice them a lot more. Beforehand, they were just noise on an endcap at Target and now they sing to me as I make my sweep through the action figure aisle. Because lord knows, I really need more useless pieces of plastic to collect!