It’s become part of my Doctor Who viewing routine to watch the new episodes and lament over how almost every single character would have gotten an action figure back in the heyday of Character Options’ 5-inch line. Oh, the missed opportunities over the last couple of Series. Now, we’re lucky to get a handful of figures a year. And I do mean lucky, because I’m sincerely grateful for every single release these days. That goes double for today’s because it’s the version of The 8th Doctor from the six-and-a-half minute short, “Night of the Doctor!” 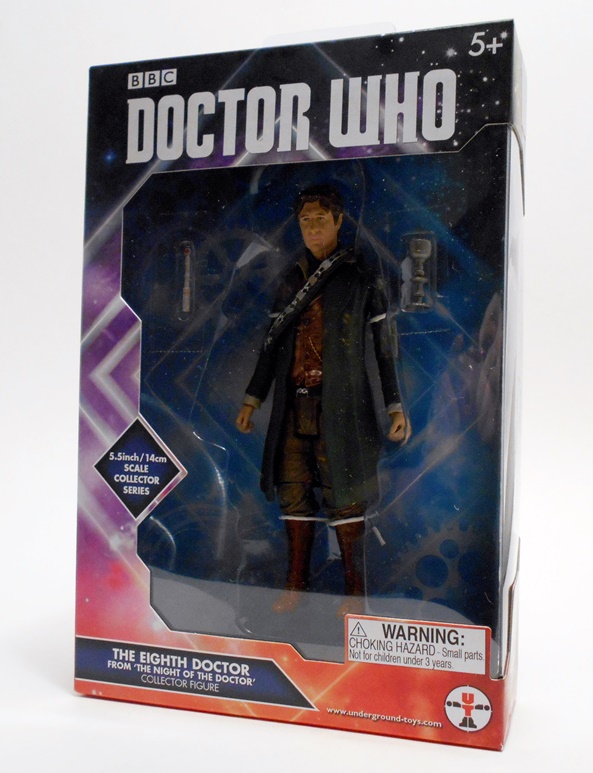 If you picked up either version of The 12th Doctor figures last year, you’ll know just what to expect from the packaging. The figure comes in a window box very much in line with what a lot of the big toy companies are doing with their 6-inch figure lines. The deco is a sumptuous blend of old and new, the window shows off the figure beautifully, and everything is totally collector friendly. Needless to say, I like it!

The back of the box gives you a little blurb about the great Paul McGann as The 8th Doctor and the short “minisode” that the figure is based on. When it comes to that 1996 Fox TV movie, my motto has always been “hate the movie, love The Doctor!” That’s probably why I dig this short so much. It not only gave us a precious few more minutes of McGann on screen as The Doctor, but this time it was brilliant and it finally gave him a proper (and superb!) regeneration scene as well as legitimized his Big Finish Audio Adventures by having him rattle off the names of his companions. Lovely.

It’s no secret that I’ve been disappointed with the QC in the last few figures in this line. I’m happy to say that this figure shows improvements on a massive scale. The paint is near perfect and there are no loose, pulled, or wobbly joints. Naturally, I had to get him online, so when I was ready to cringe when I pulled the package from the shipping box. Needless to say, I was pleasntly surprised with what I got! I absolutely adore this costume. It’s like a blend of Edwardian gentlemen meets steampunk high plains drifter and the sculpt and paint used to bring it to life are both implemented beautifully. There’s all sorts of detail in the vest, including the unbuttoned bottom button and the chain to his fob watch running off to the side and disappearing under the coat. The coat is the usual vest faked out with sculpted arm sleeves and it works brilliantly here. The boots include individually sculpted laces and the open shirt collar with cravat looks great. The paint used to make the worn leather finish on the boots loos particularly nice. 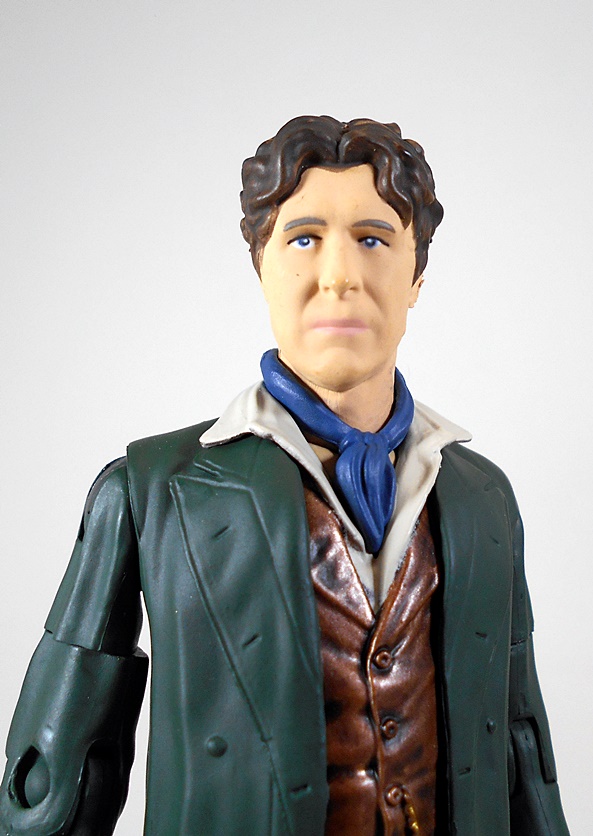 The portrait is fine, but under close scrutiny it looks rather soft. It’s a decent likeness and certainly sets itself apart from the McGann portraits Character Options has delivered in the past.

With fewer figures being produced each year, you’d think that CO would have cut back on the articulation, but this Doctor is probably the best articulated figure this line has ever seen. The arms feature rotating hinges in the shoulders, hinged elbows, and swivels in the biceps and wrists. The legs feature a t-crotch in the hips with added lateral hinges. The knees are hinged and there are swivels in both the thighs and the tops of the boots. There’s a swivel at the waist and again at the neck.

The Doctor comes with three accessories. First, you get the bandoleer strap that he took from Cass, the woman he failed to save. It’s a very key accessory, as the woman died refusing to trust The Doctor because of his connection to the Time Lords. Her death was in effect the last straw that led to him finally agreeing to take up arms and fight to end it. The strap is removable and very similar to the one seen sculpted under the jacket of The War Doctor. 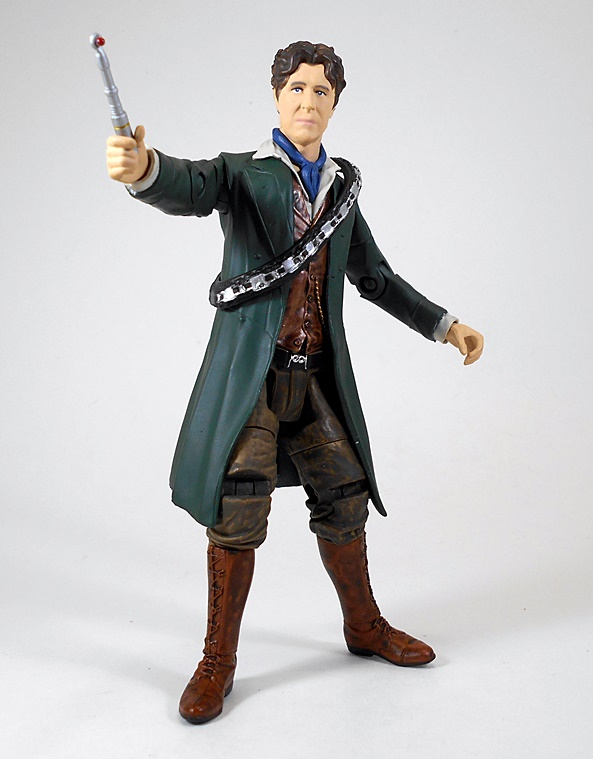 Next up you get the Sonic Screwdriver, which is a wonderful little piece because it matches the design of the ones carried by the classic Doctors.

Finally, you get the chalice that was given to The Doctor by the Sisterhood of Karn, containing the Elyxyr of Life, which allowed him to undergo a customized regeneration. It also figured in that wonderful little sequence where he canonizes his Audio Adventure companions before drinking: “Charley, C’rizz, Lucie, Tamsin, Molly, friends, companions I’ve known, I salute you. And Cass, I apologise…. Physician, heal thyself.” Freaking brilliant.

At this point every 5-inch scale Doctor Who figure I can add to my shelf is a rare treat. This one, especially so because a) It’s a version of The Doctor that I badly wanted and b) the craftsmanship on display here is exceptional. He’s definitely going to replace my current 8th Doctor on my Shelf of Doctors. Seeing that CO is still capable of producing a figure this nice makes me just want more. Fortunately, I do happen to have another new one to check out next week: It’s Missy! Well, she couldn’t go around calling herself The Master, could she?