Last year, the folks at Mezco wowed me with the first assortment of their Mortal Kombat X line and the second assortment hit just at the tail end of 2015 and it’s been hanging around waiting to be opened for the better part of a month now. Today, I’m checking out my most anticipated figure of that second wave, the deadly and lovely Kitana! 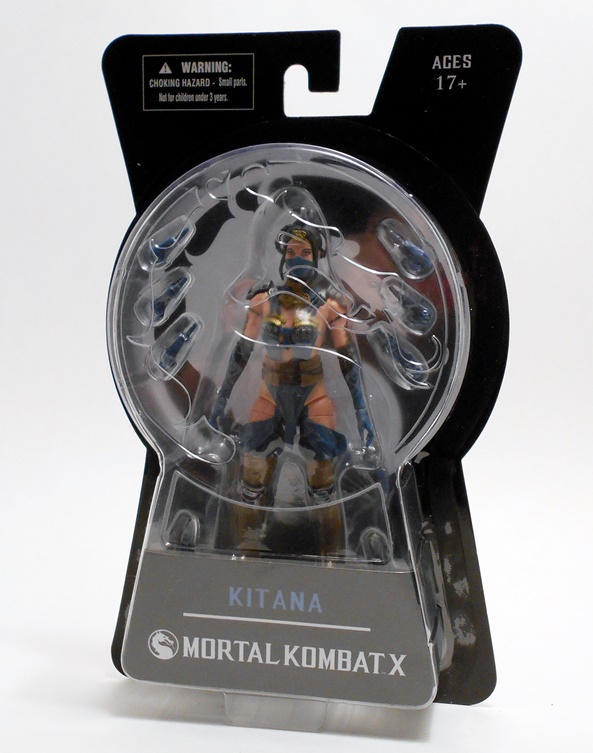 The packaging is largely unchanged from the first wave. You get a funky shaped card and a bubble molded to look like the MK emblem. It’s a snazzy presentation that shows off the figure quite well, but it’s totally unfriendly to collectors and so it’s getting torn open and pitched. FigureFan vs Packaging… FIGHT!

The sculpting on this line has been top notch from the get go, and Kitana keeps that delightful trend chugging along. The top half of her outfit is layered onto the female buck to add a lot of depth and credibility, not to mention a little bit of lovely side-boob. That’s side boob… not to be confused with Noob Saibot. Extra sculpting is used for the ornamentation on her shoulder guards, gorget, and breast armor, all of which looks great. I’m not a huge fan of the baggy parts of her costume that puff out of the tops of her leggings, but that’s more an issue I have with the character design and not the execution of the figure. The leggings include sculpted stitching and there are extra armor pieces for her knees. The coloring also serves to back up the sculpt quite nicely. I really dig the shade of blue they used here too. It’s very similar to the wonderful blue they used for Sub Zero’s costume.

Kitana has a pair of tabs on her back, which are obviously designed to interact with her weapons, I’m just not a hundred percent sure how. It’s similar to the deal with Scorpion where you had to figure it out for yourself. I was able to clip her blades in there, but it’s tentative at best and there are rather conspicuous slots on the fans that make me think they’re supposed to go in there somehow. 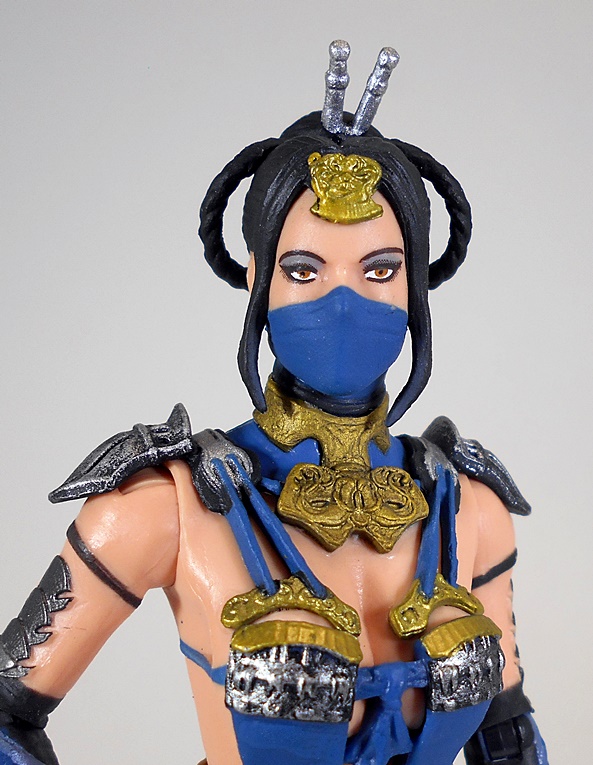 The portrait here is very well done. Even though half her face is covered up, the paint on the eyes is enough to carry the day. Definitely a pretty lady. 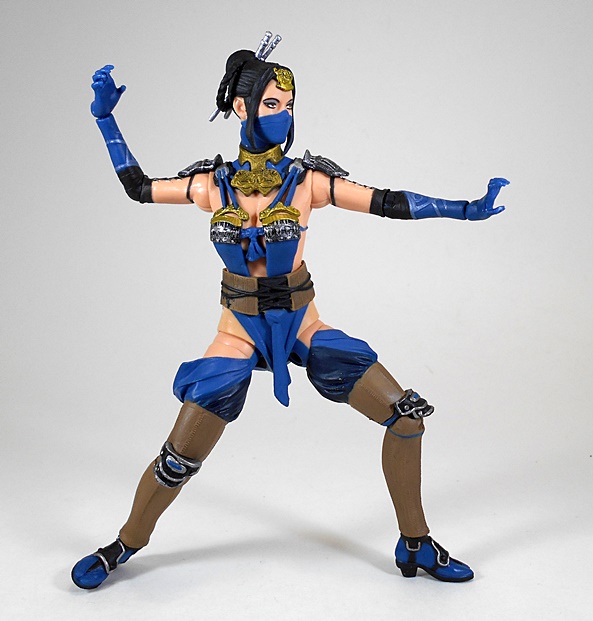 Kitana features some solid articulation very much in line with what we saw on the previous figures. The arms have rotating hinges in the shoulders, elbows, and wrists. The legs are ball jointed at the hips, have rotating hinges in the knees and ankles, and swivels at the thighs. There’s a ball joint at the waist and another at the neck. Her posability is perfectly serviceable, but these are fighting game figures, so there is definitely room for improvement. I would have certainly liked a greater range of motion in the hips at least. I’m also happy to say, I’ve never had any issues with stuck joints when dealing with Mezco’s products.

The package includes no less than four pairs of hands, which is certainly impressive for a figure in this scale. You also get two sets of weapons. First, Kitana has her regular blades. These include blue painted handles and etched blades. They’re great little pieces, but let’s face it, they’re upstaged by her amazing fans… 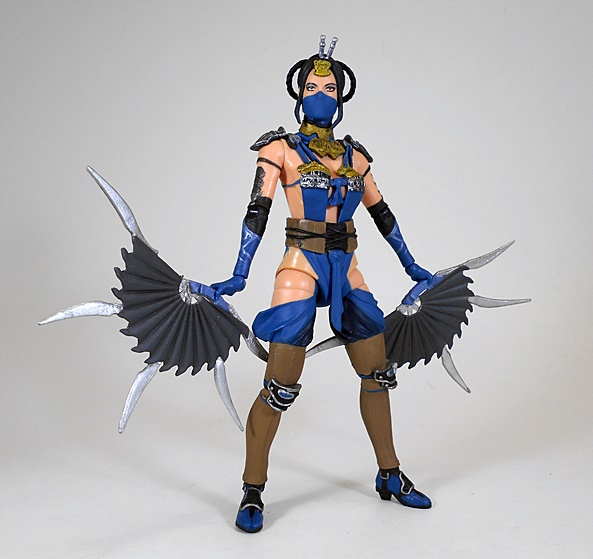 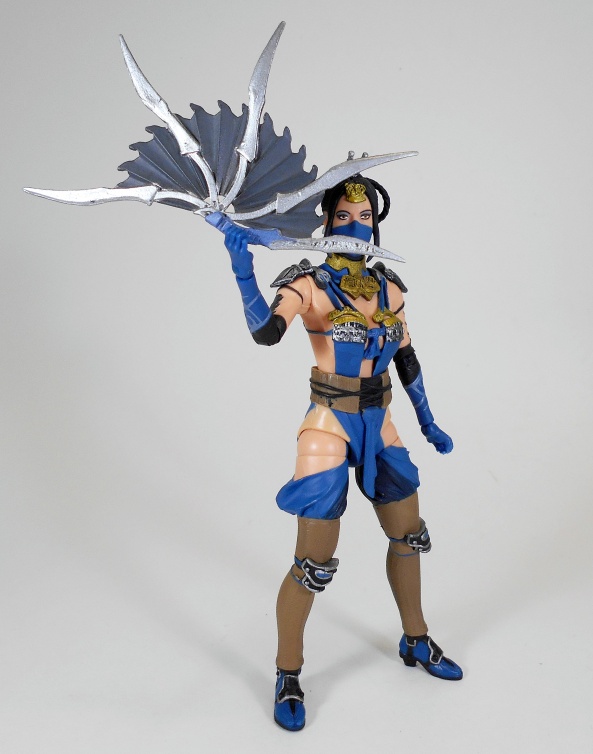 Yeah, I’m a big fan of these fans! Yeah, technically, they’re meant to be the same weapon as the regular blades. They look amazing and she can hold them beautifully. I can’t imagine I’ll be displaying her without these very often  as they remain her trademark weapons for me. 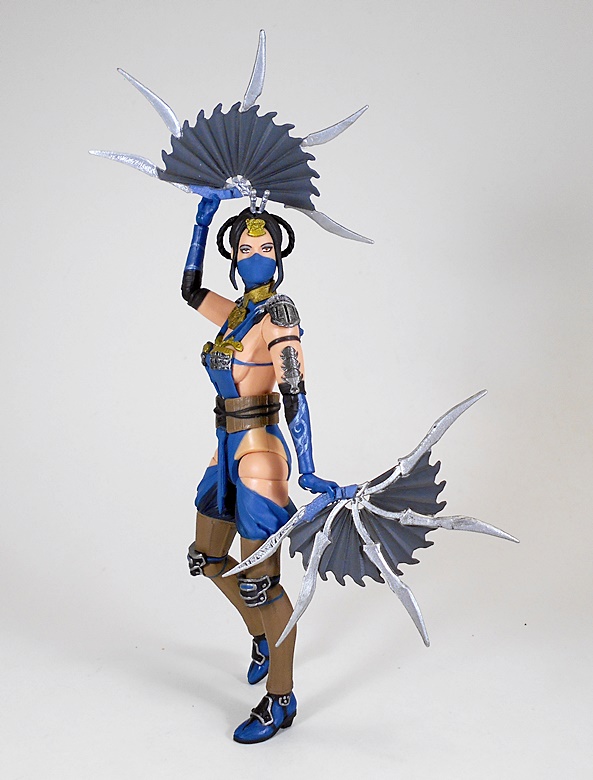 Kitana is another solid addition to this wonderful little series. Mortal Kombat hasn’t been a big deal for me for a long while, so it’s a testament to the look and quality of these figures that I’m collecting them at all. The paint and sculpt on these have been superb across the board and I really wish that Mezco would snag some more licenses and produce more articulated figures in this scale, rather than just churning out semi-articulated Breaking Bad statues. Unfortunately, the fate of the MKX line doesn’t seem all that rosy and Mezco hasn’t been very upbeat about the likelihood that the line will continue into 2016. The next two figures in the wave are Quan Chi and Kotal Kahn and you can expect me back with a look at those in a week or so, as soon as I’ve cleared some more of the rest of my backlog!

One comment on “Mortal Kombat X: Kitana by Mezco”