I distinctly remember, back in the 80’s I used to get up on Sunday mornings, pour myself a big bowl of cereal (probably Cap’n Crunch) and watch the Transformers cartoon before my parents hauled me off to church. I’m not gonna lie, most Sundays I would spend the whole time replaying the episode in my head, but then there was that one episode, Enter the Nightbird that had me so pumped, I’m surprised I didn’t just stand up in the middle of Sunday Mass and scream, “WATCH OUT, OPTIMUS, SHE’S PLAYING ROBOTO-POSSUM!” It was a great episode and I always wanted a Nightbird figure because she was a giant female robot ninja, and if you need any more reason than that, you must be very empty inside. About the only thing Nightbird didn’t have going for her was she wasn’t a Transformer… well, now she is!

This is my first time dipping my toe into Takara’s Transformers Legends line, not to be confused with Hasbro’s Legends line. On our side of the Pacific Legends means tiny little bite-sized Transformers, whereas abroad it has consisted of repaints of Deluxe toys and a few unique characters. I do dig the packaging here quite a bit. It’s a compact window box that displays the figure in her vehicle mode with a very G1-inspired grid deco, some bitchin’ character art, and a lot of copy that I can’t read. You get a fold-out instruction sheet with some very wacky looking comic pages and a poster too. Everything is collector friendly, which is a definite plus because there are a lot of accessories here to keep track of. 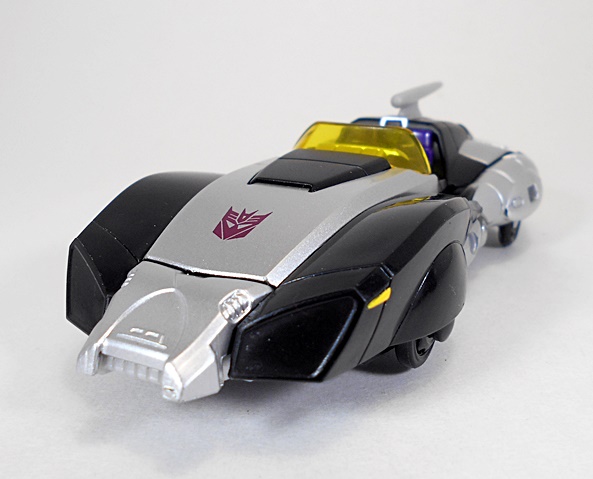 As already mentioned, Nightbird is an actual Transformer now, and as you can probably tell from her vehicle mode, she’s a repaint (and ever so slight remold) of Generations Arcee. This futuristic convertible is one of my favorite alt modes in recent history and it looks rather spectacular repainted in the black and silver Nightbird colors. You also get purple seats to complete that classic Decepticon deco and a tinted yellow windshield. The only changes to the mold can be found in the very tip of the hood. While Nightbird started life as a free agent, here she proudly bears a Decepticon logo on her hood and it looks great. 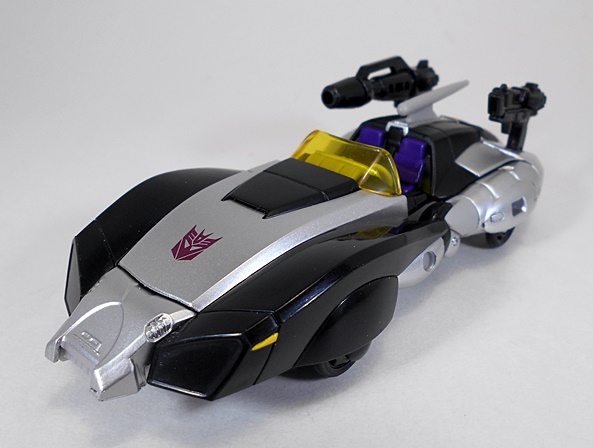 As with Arcee, there are still several ports on this vehicle to take the weapons she comes with. So you can really arm Nightbird to the teeth even when she’s cruising around on the roads of Cybertron. Of course, some of the weapons look better on her alt mode than others.

Transformation is identical to Arcee, which means it’s a lot easier going to robot mode than packing everything away into vehicle mode. Still, once you know what you’re doing, neither conversion is all that difficult. There’s a little more remolding evident in the robot mode, all of which can be found on the torso, and of course the new head. While the new sculpting is appreciated, I have to say I’m really amazed at how incredibly well this figure works as Nightbird with so little tweaking. In fact, if I didn’t know it already, and if it weren’t for the car kibble backpack, I’d be hard pressed to guess that this wasn’t created specifically to be Nightbird.

The new head is a fairly simple yet fantastic sculpt and features some rather nice light piping in the eyes, which I utterly failed to capture here.

In the cartoon, Nightbird was able to keep all the Autobots at bay with her cunning Ninja tricks and her action figure sports a nice arsenal of weaponry. For starters, she has the same two guns that came with Arcee, both black this time. I like the design of both these guns, but they sit rather high in her hand making them look a bit awkward when she’s wielding them. Thanks to the side tabs, she can also attach them to her hips as if they were holstered.

Also included are Arcee’s swords, this time cast in yellow translucent plastic. I like these pieces a lot and she looks great holding them. It’s a pity that they didn’t include side tabs so she could wear them on her hips with the blades flat against her, rather than sticking out awkwardly.

Last and certainly not least, you also get a pair of energon sai, which are a welcome addition to the arsenal and very appropriate for the character. Like the swords, these are also cast in clear yellow and while all the weapons are appreciated, it’s the sai that are going to be displayed on her person most of the time. These can also be tabbed into her forearms or comfortably worn on her hips. Very cool! 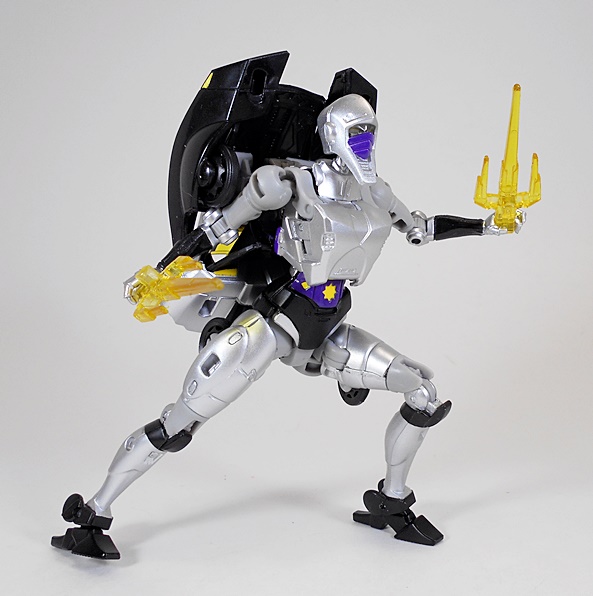 As an import, the price on the Takara’s Legends figures are certainly steeper than the Hasbro Deluxes. Nightbird set me back just a bit under $30 and that seems to be the going price for these. Yes, you do get an extra pair of weapons and I think overall the paint is of better quality than what we see on the American releases, but this is a case where I was really paying for a character that I really wanted and had very little chance of ever making it Stateside via Hasbro. Chances are this will be a one-shot dip into this line, but even at about twice the price of a Generations Deluxe, I have no regrets. Nightbird is an amazing little figure and one that I’ve wanted for a long time.