I’ve got more Hot Toys business to take care of before returning Marvel Mondays to its regularly scheduled parade of Marvel Legends figures. Actually, it might be a couple more weeks before I get back to Legends, which is fine because I’m at least a couple of waves behind and it’ll give me a chance to get caught up. Today, I’m looking at a figure that’s been on my shelf for a little while now, but I’ve only recently got the time to give its proper due. It’s Iron Man, a character that Hot Toys must thank god for every day because they’ve probably made enough money off of Tony Stark to buy themselves a small chain of islands. 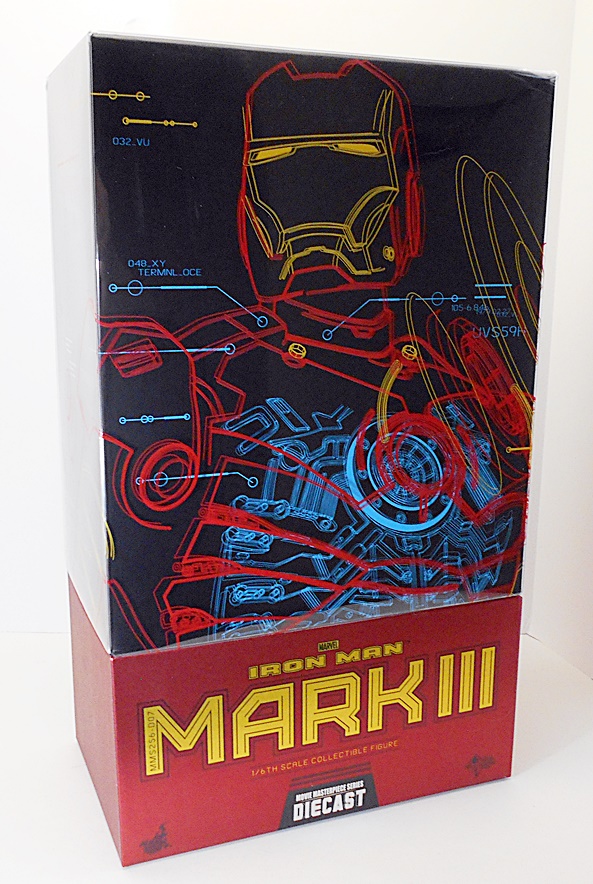 This is only my second figure in Hot Toys’ Diecast Series, the first being Robocop. The packaging here is very similar. You get a snazzy laminate top with line drawings of the armor. I really dig the art design on this package. In fact, I’d dare say it’s my favorite box out of any of my Hot Toys figures. The top three-quarters or so of the box lifts off to reveal the styrofoam cube that holds the goods quite securely. The sheer weight of the box is certainly impressive and this definitely feels like a package befitting of a $300 collectible. The original version of this figure came out in 2008 and was all plastic, so we can only assume that Hot Toys is going to be double dipping on as many of these armors as possible by upgrading them to diecast. After all, they couldn’t milk that House Party Protocol shit forever. 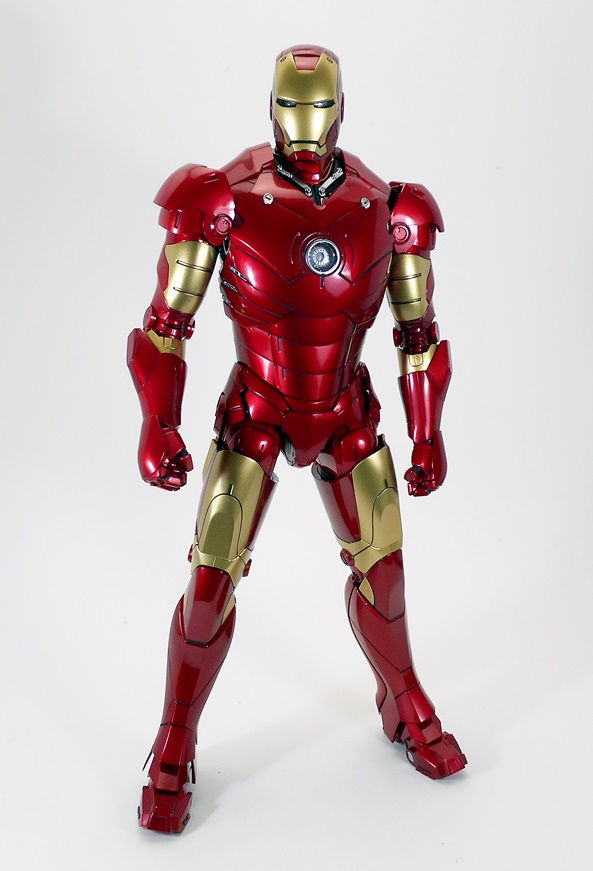 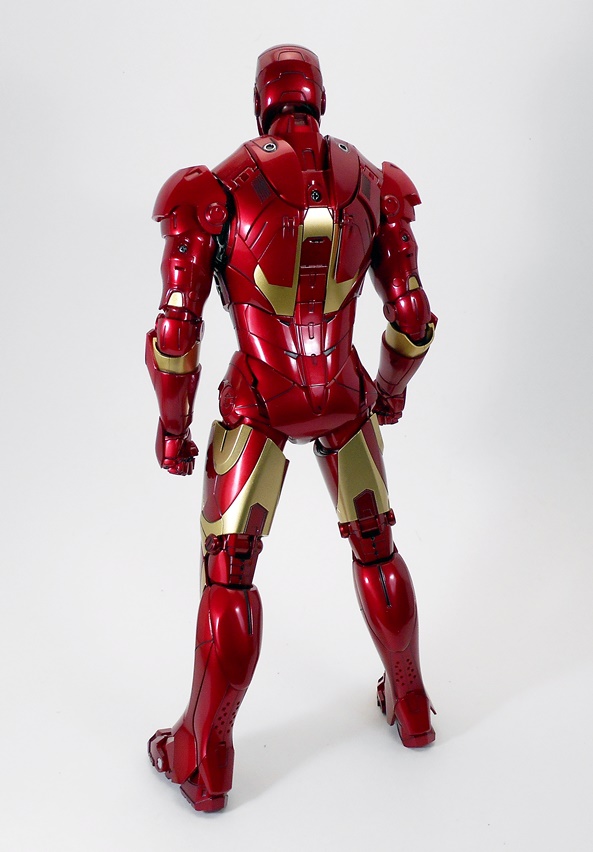 Here it is, the armor that started it all. Well, sort of. The Mark I was the DIY monstrocity that Tony built in the cave, and the Mark II was the bare metal predecessor to this suit. But here’s the first armor worn by Tony Stark that bore the iconic red and gold in the MCU. While I was really partial to the Mark VII for a while, I always come back to this one as my favorite. I think it’s the lovely contours and less angular nature of the design that really does it for me. It’s not overly busy, it’s well proportioned, has clean lines, and the deco has just the right mix of red and gold in it for my liking. The base figure is stunning and it’s the paint that grabs my attention first. This is as close to a new car finish as one can imagine and the quality control here is stellar. There isn’t a blemish to be found on my figure’s paint to speak of and that in itself is rather impressive. In hand, the figure has a satisfying heft to it, even if most of what you’re touching when you handle the figure is plastic. About the only thing here to dispel the illusion that this is a shrunk down Mark III armor are the three screws visible on the back needed to access the battery compartments. 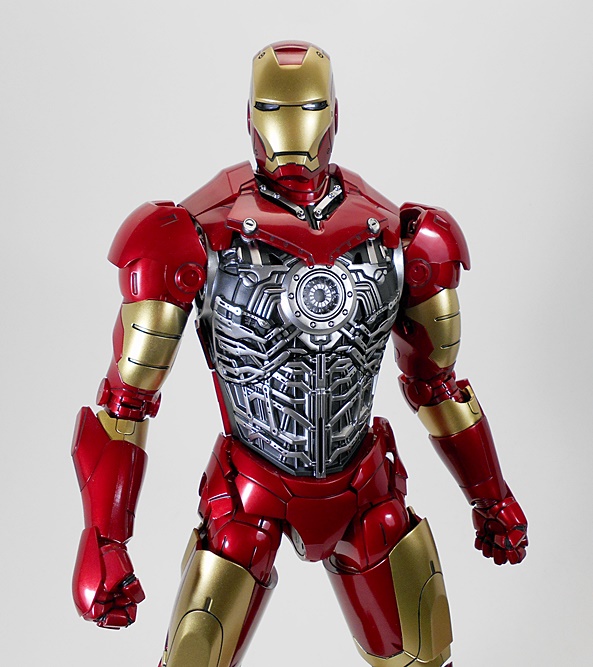 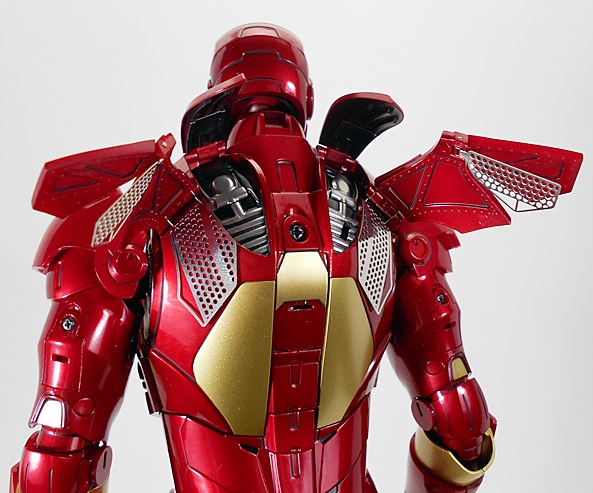 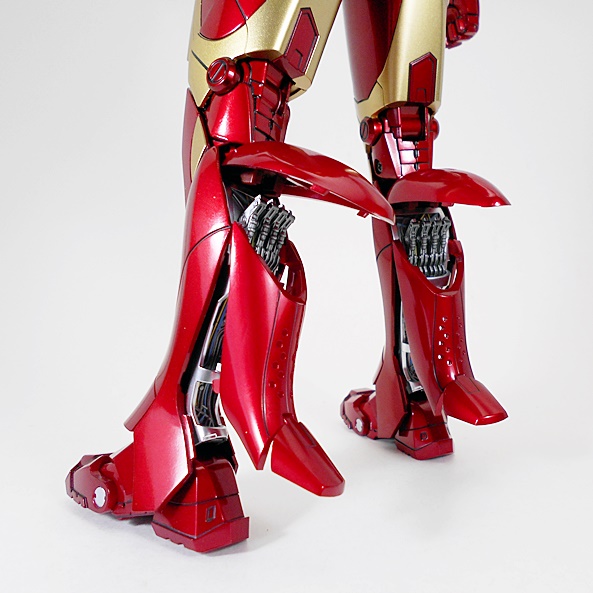 There are plenty of little bells and whistles on the suit to enhance its display options. The chest piece and lower abdomen plate are removable to show off the beautiful detail under the armor. These are both held on by tabs and are pretty easy to remove and yet stay firmly in place when handling the figure. The flaps on the upper back are all articulated and can lift up. And the back of the lower legs are also hinged and can be opened to reveal all the mechanical intricacies of the suit’s inner workings. I can’t imagine actually displaying the figure with any of these opened, but it makes for a wonderful experience when handling the figure or showing it off to friends. Of course, these parts also demand extra care when playing around with the suit. 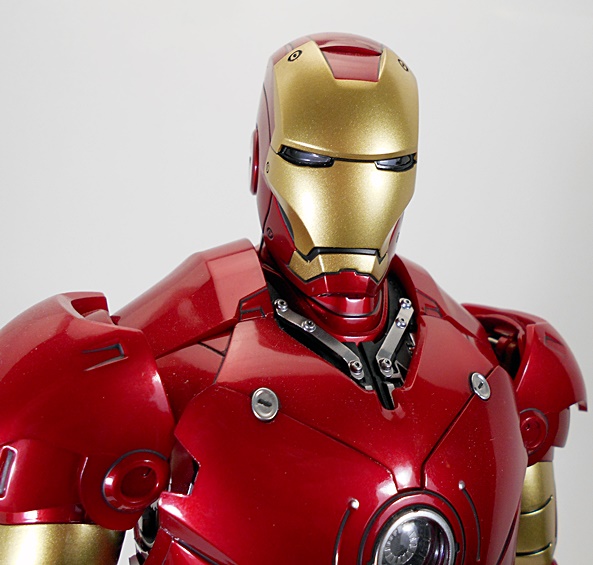 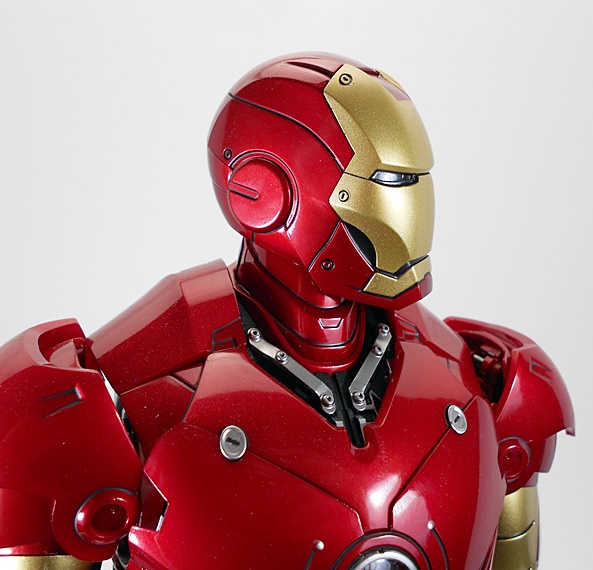 The helmet looks outstanding and I really dig the exposed linkages around the “collar.” The faceplate is held on by magnets and can be removed to access the switch for the helmet lights. Of course, if you’d rather go with the Tony Stark open helmet look, this figure has you covered with an alternate head. 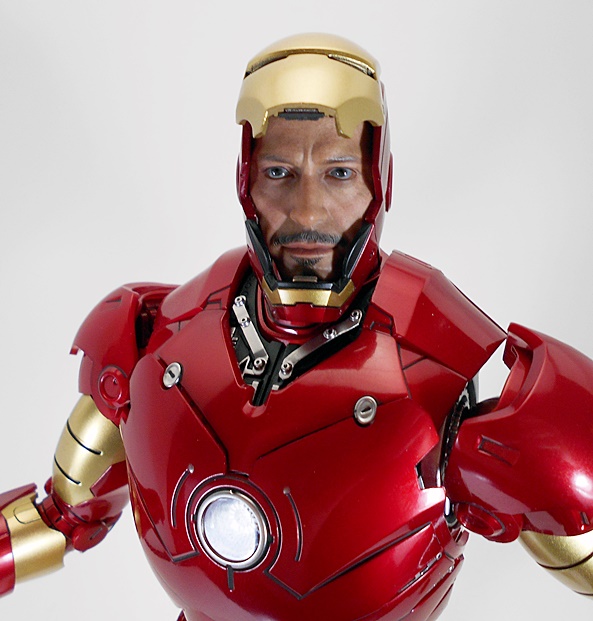 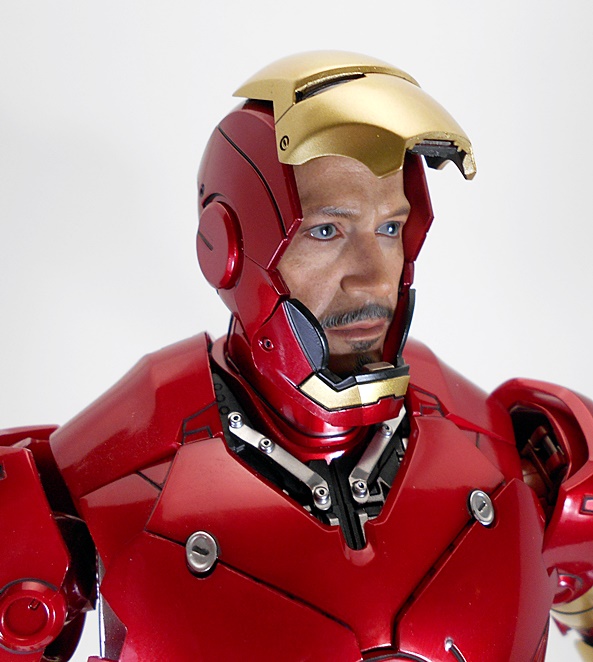 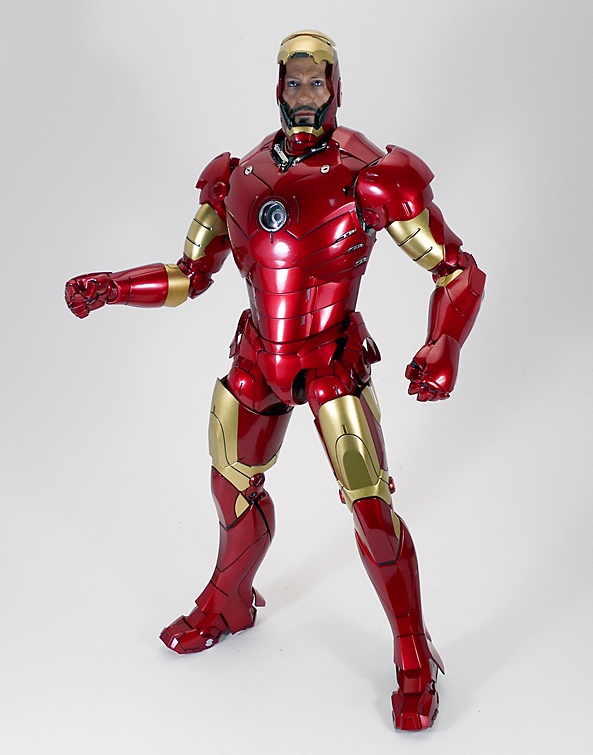 It’s a simple ball joint pop-and-swap and very easy to do. The portrait here is excellent, but then again, Hot Toys has been doing enough Tony Starks at this point that their sculptors should be able to do his likeness in their sleep. This head also comes with a magnetic faceplate, which can be attached to the top so that it appears “flipped up.” While the visor is intended to sit on top of the helmet,  it can also be placed over the face for a closed helmet look, but it’s not a perfect fit and leaves a slight gap down near where the mouth is. Even with the tiny gap, though, I think it’s an acceptable option, particularly if you want to go from a closed to open look without bothering with the head swap. Of course, with the alternate head you won’t get the option for the eye lights. 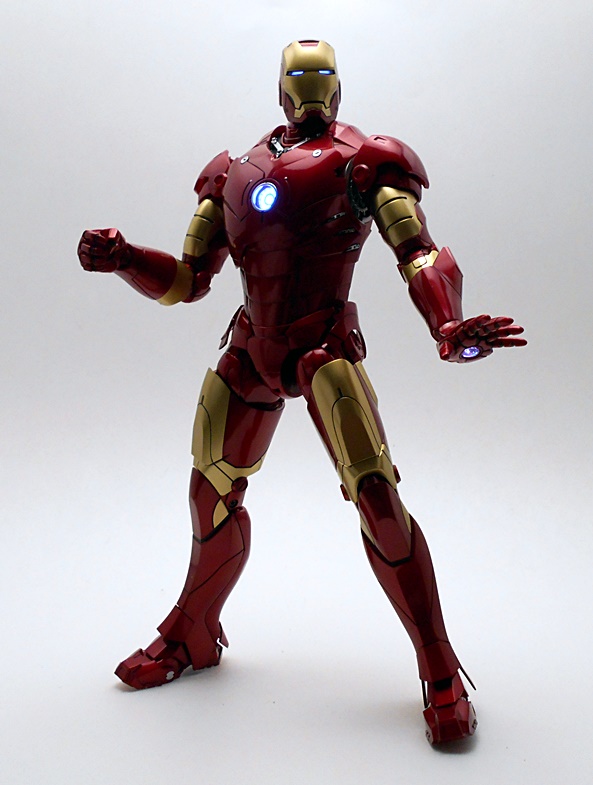 Speaking of lights, the Mark III has four separate light points on the figure: The Repulsor Beams in the palms, the Arc Reactor in the chest, and the eyes in the head. Each of these have their own independent battery compartment and on/off switch. The switches for the helmet and chest are concealed behind plates, while the ones for the hands are fairly well hidden under the forearms. The lights are pretty bright and visible even in a well lit studio. I also appreciate the fact that they were able to make the Repulsor Beams light up and still keep the swappable hands. There are a total of three pairs of hands. You get one set of fists (non-lit), one set with individually articulated fingers, and one set of open palm angled up to simulate him firing his Repulsors. 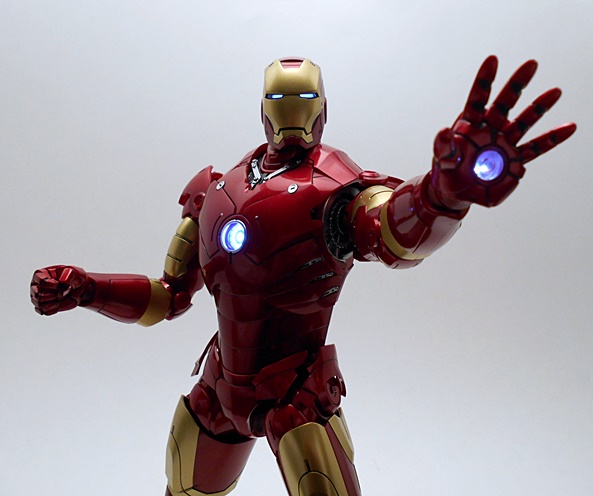 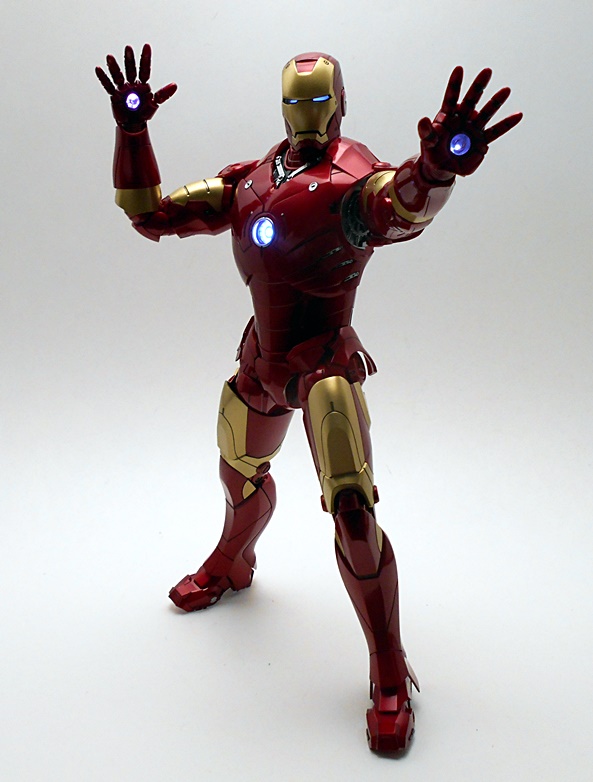 The articulation on the figure is quite good, but it requires a lot of care. There are plates on the shoulders and hips that are attached to hinged flaps to keep them from hindering the limb movement, but it’s pretty important to work these out of the way manually as you pose the limbs. The care is not only to prevent paint scrapes, but to protect the potentially fragile hinges on the plates themselves. The result is that as satisfying as the articulation can be, moving each point can sometimes feel like an event in itself. The engineering, however, is designed to help as much as possible. The arms will pull away from the shoulders to allow for some clearance and the legs will actually pop completely off of the hip ball joints to avoid breakage. Of course even with all these points of articulation, it would still be physically impossible to get the suit into the iconic ground-pound pose. But fear not, because Hot Toys went above and beyond to accommodate by providing an extra lower torso that’s bent in a way to allow for the ground-pound. I love that they did this, but it’s quite a lot to go through and my personal results were a little lacking. 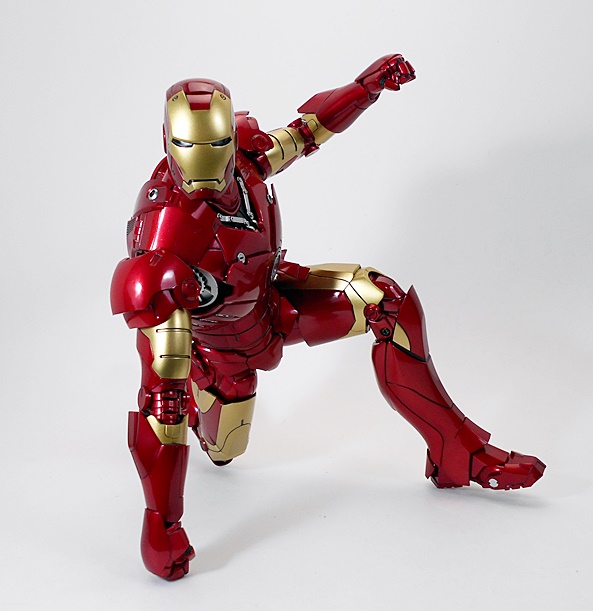 Hmmmm. It’s close… but not quite. Now I’ll concede I have seen plenty of pictures of this figure in a perfect ground-pound. It’s definitely capable of it, but I just wasn’t willing to risk my figure to try to get a pose for a couple of shots. Indeed, I doubt I’d ever go through the trouble to try again. The process involves removing both plates from the front torso, then pushing a release button to wiggle off the top of the torso, so you’re basically pulling the figure into two halves. The first time I did it, it was a nerve-racking experience, because I just didn’t know how much force I was supposed to be exerting to get the figure apart. Next another release button detaches the lower torso. Now you pop in the new lower torso, put the two halves of the figure together, replace the front torso plates, and do some very scary extreme posing of the left hip to bring the knee up as high as it will go. Now, everything goes back on really easy, and a subsequent attempt at the process was less stressful because I knew what was going to happen, but there’s still the fear of damaging something when grasping the figure tightly enough to do all this. There are just so many moving parts on the figure and so much potential for breakage. In the end, I appreciate the effort, but I’m content to leave it at that. 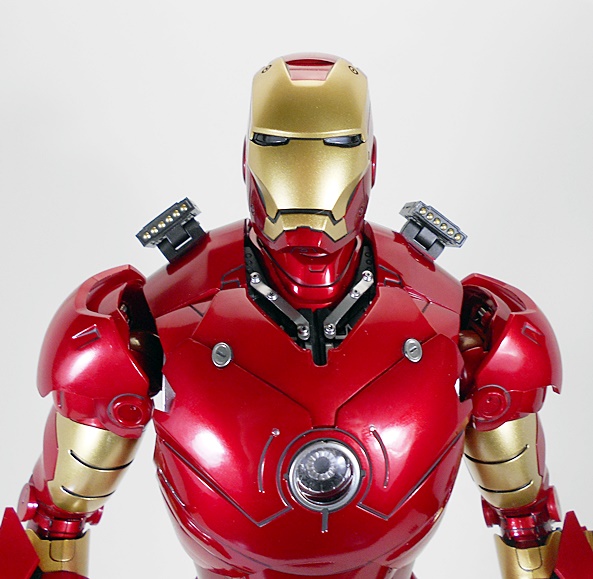 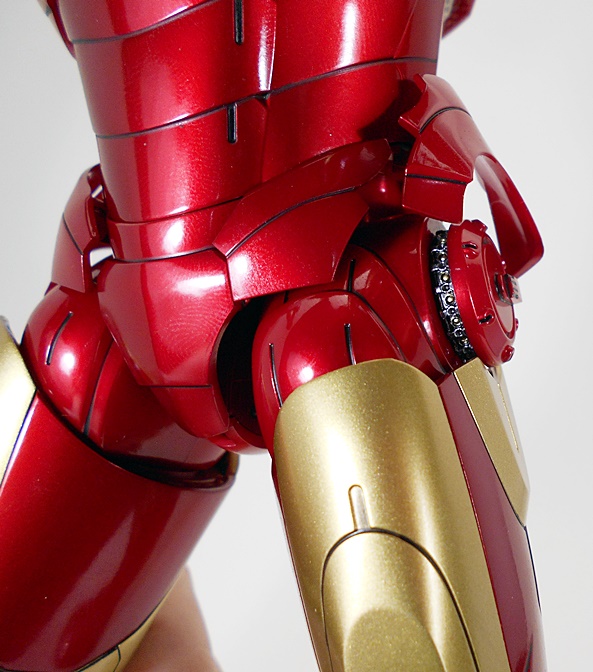 The rest of the figure’s accessories include optional display pieces featuring his various deployed weapon systems. You get the shoulder missile packs, the countermeasure systems on the hips, and arm rockets. The shoulder packs look great and are hinged for elevated targeting. The hip pieces are a nice touch, but it’s a rather subtle change. The shoulder packs are super easy to swap out, whereas the hip pieces can be a little stubborn to remove. 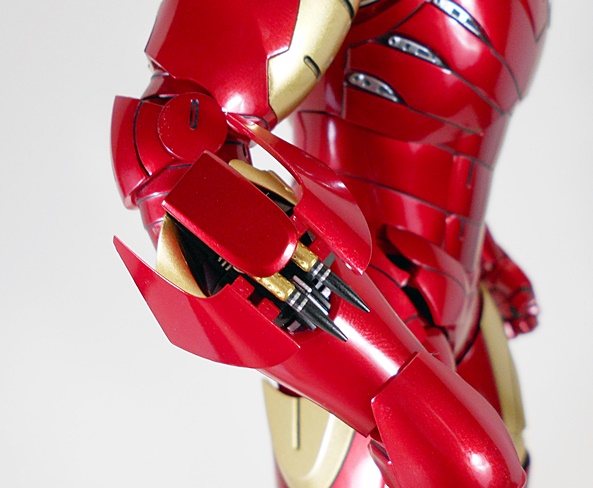 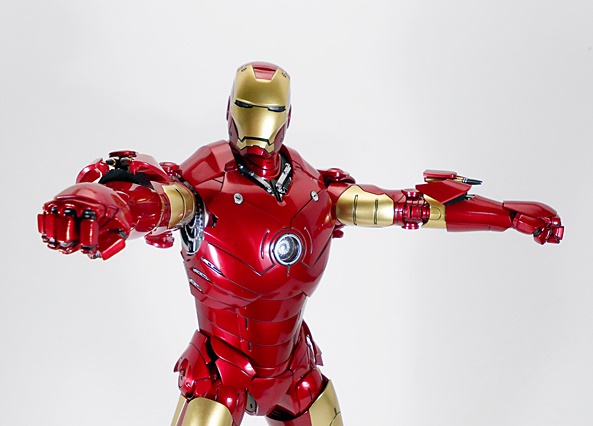 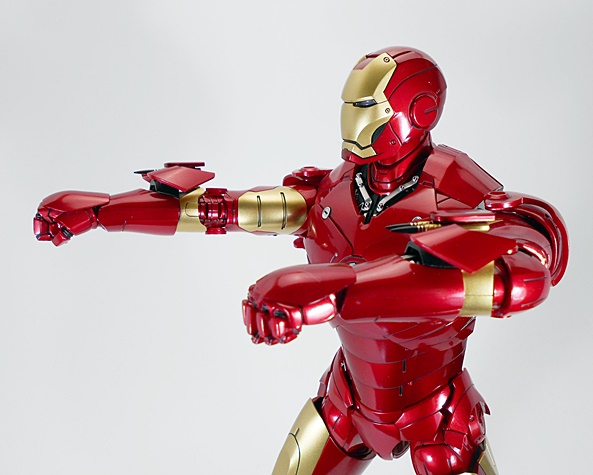 The arm rockets are my favorite of the three weapon systems. I love the way they make the plates look like they actually shifted and the paintwork on the little rockets is beautiful. 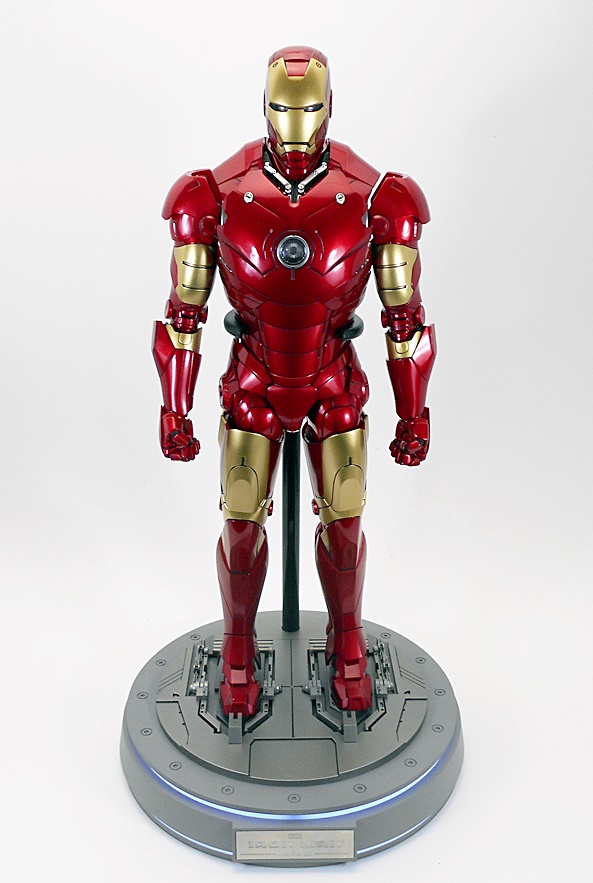 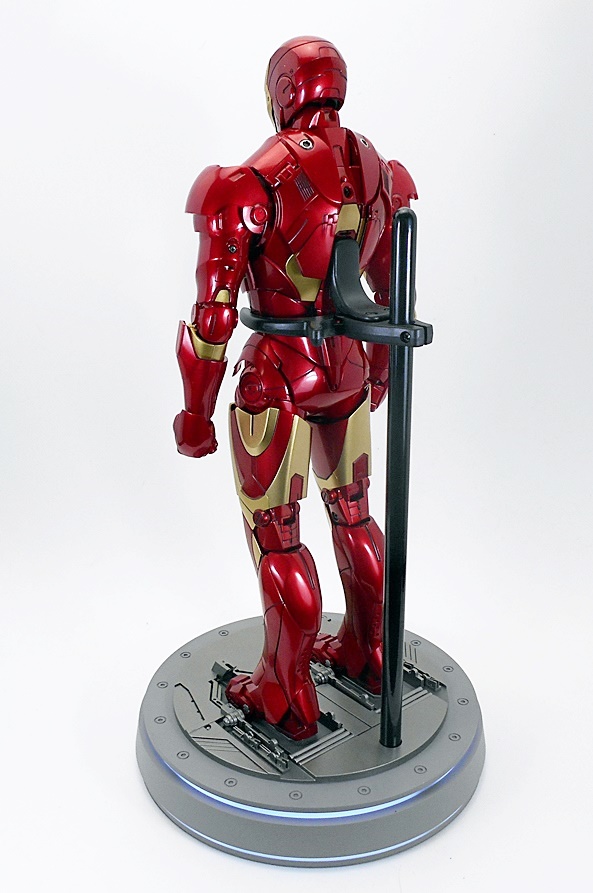 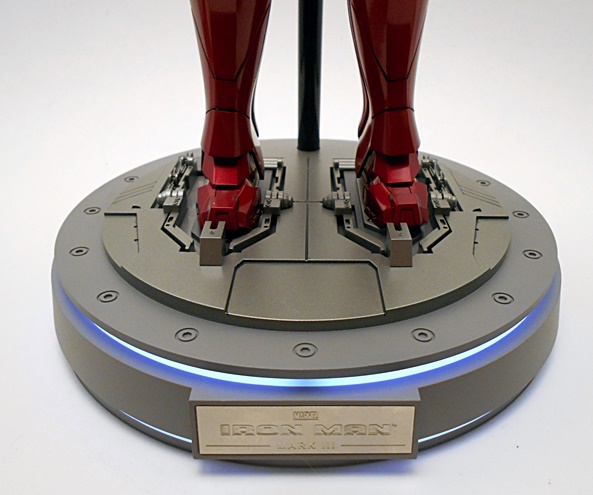 The figure comes with a very impressive stand. It’s designed to look like one of the alcoves in the Hall of Armor, complete with sculpted areas where the feet go. You get a very strong post with a waist grip that is spring-loaded and features foam to gently grasp the figure. The base even lights up. As magnificent as the stand is, I’m rather torn on it. It works great for a totally stiff, museum style pose, but it’s very singular in its intended purpose. If you want to go for something more exciting, the placement of the feet on the stand comes off looking awkward. 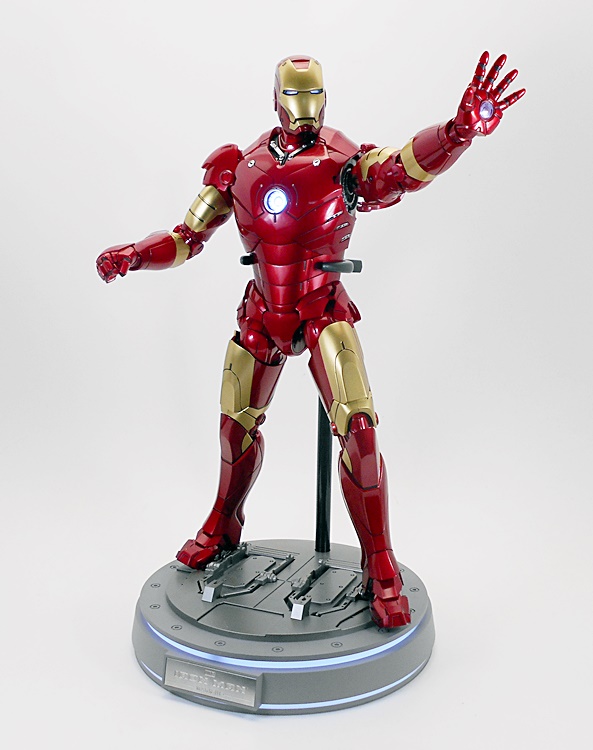 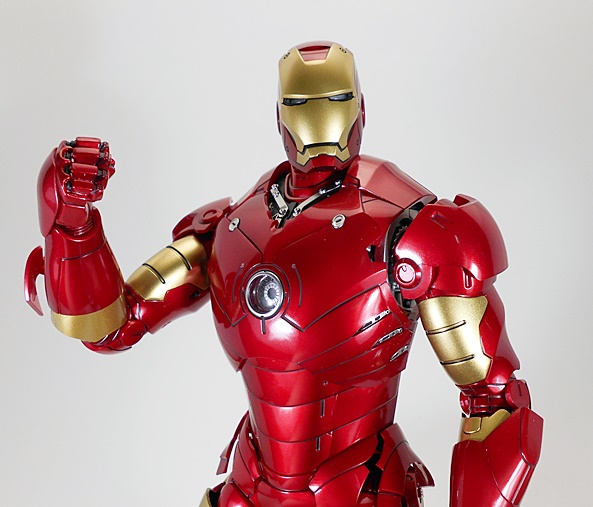 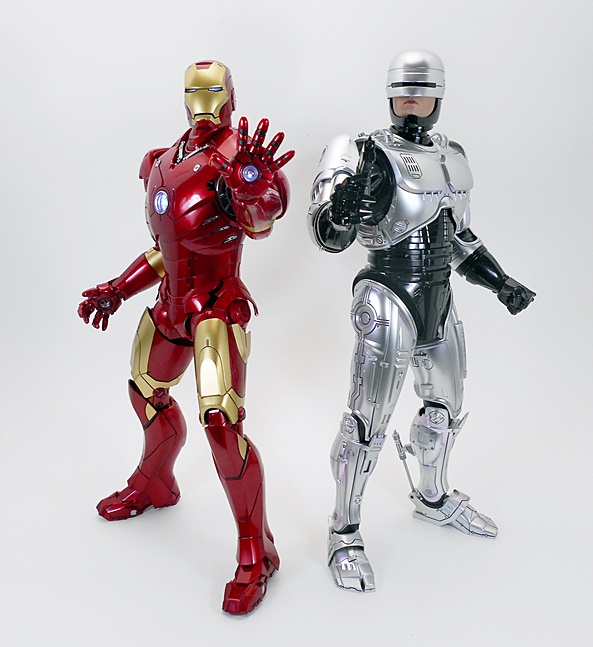 The Diecast Series figures run right around the $300 point. This figure was actually $309. When you consider that the average Hot Toy figure is hitting the $220-250 mark these days, I don’t think the increase in price is all that bad for what you’re getting. Granted, I only have this one and Robocop, but keep in mind the $300 range is about as high end as I get, and both figures have left me more than satisfied. Indeed, both figures are absolute works of art and I’d consider them the finest pieces in my collection. And if there was ever a perfect example of why my Hot Toys Marvel collection is a rather eclectic collection of appearances, the Mark III here is it. There’s no way I can afford every release of every character and so I try to curate my favorite versions and appearances. That’s why I have a First Avenger Cap over an Avengers Cap and that’s why this is the first Iron Man armor I bought. That doesn’t mean I won’t be looking at the Civil War suit in the upcoming year and depending what my financials look like at the time, I’d be open to getting a Diecast Mark VII if and when Hot Toys ever gets around to it.