Another Marvel Monday, another Legends figure. I’m in the home stretch with my look at the Red Skull/Onslaught Wave and down to the very last slot of shared figures. These are the “Mercenaries of Mayhem” and if you haven’t guessed yet, I’m saving my most anticipated figure of this wave for last… so until then let’s check out Demolition Man.

Package Shot. Nothing new to say about it, so let’s take a minute to qualify who this figure really is. Yes, it’s Dennis Dunphy who was Demolition Man, but this is the character under the control of Hydra in the guise of Scourge in the pages of Captain America. Why they didn’t just name him Scourge on the box is beyond me, because I’d be pretty surprised if Hasbro let the name Scourge fall out of trademark what with it being the name of a character in their line of change-o-bots. I’d argue that having the name Demolition Man on the package isn’t even correct, but hey at least it only appears on the back. Also, Hasbro… make us a proper Legends Demolition Man! But hey, don’t take any of that Jameson-fueled ramble to mean that I’m not happy to get this figure. My Vol. 3 TPB of Brubaker’s Captain America is well read… 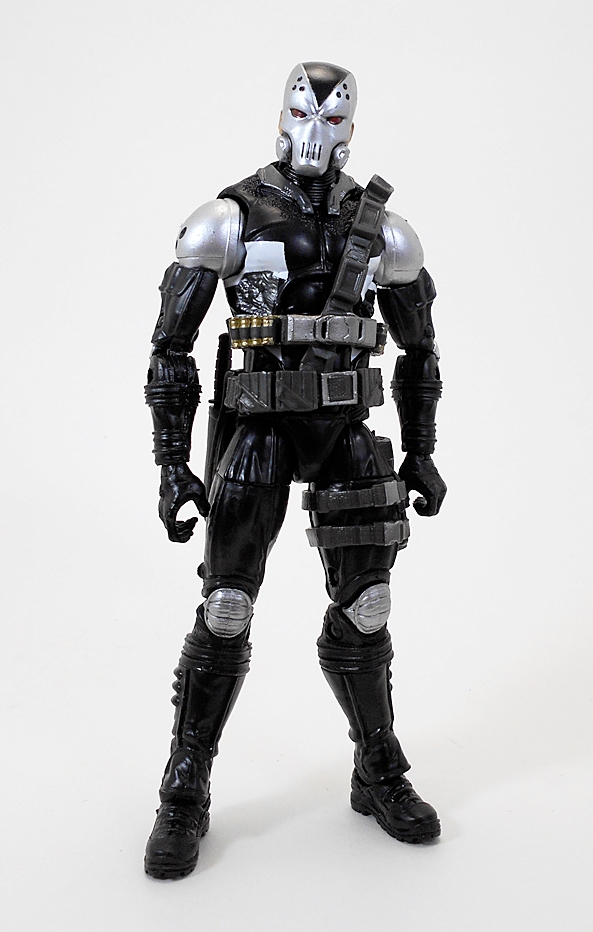 … and besides, just look at him! He’s pure 100% concentrated mercenary badass! After getting so many painted bucks, it’s always a treat to get a figure with some fresh sculpting and this guy has it plus layers of tactical gear. The buck looks all new to me, but then I’m terrible at spotting this sort of thing. He’s loaded with detail from the texturing on the torso to the segmented elbow pads, down to his distinctive looking boots. And while Scourge’s deco is derived mostly from black plastic, you do get some really sharp looking white and silver paint to spruce things up a bit. 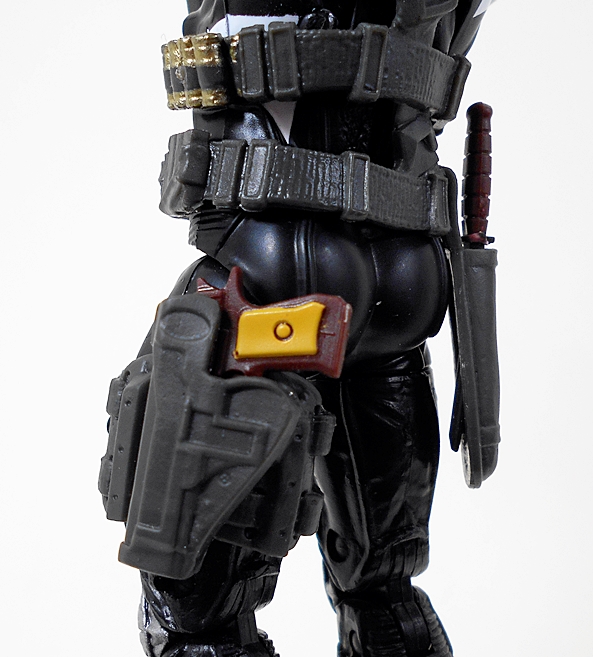 Over that brilliant buck, Scourge is toting a tactical harness with enough pouches to make Deadpool jealous. You also get some nice gold paint on the shotgun shells he has on the cross belt. The main harness has a sheath for his combat knife and he’s got a second thigh strap holding a great looking molded holster for his automatic pistol. This is great stuff!

The head sculpt is an imposing mask, which would scare any villain straight. It features narrow red eyes and slits for a mouth flanked by two breather canisters. The only thing not armored on this guy are his ears. Again, the metallic silver paint on the mask and shoulders really pops against the black of the rest of the figure.

Scourge is loaded with great articulation. The arms have rotating hinges at the shoulders and wrists, double hinges in the elbows, and swivels in the biceps. The legs are ball jointed at the hips, double hinged at the knees, and have swivels both at the thighs and tops of the boots. The ankles are hinged and have lateral rockers. There’s a ball joint in the chest and both a ball joint and hinge in the neck. 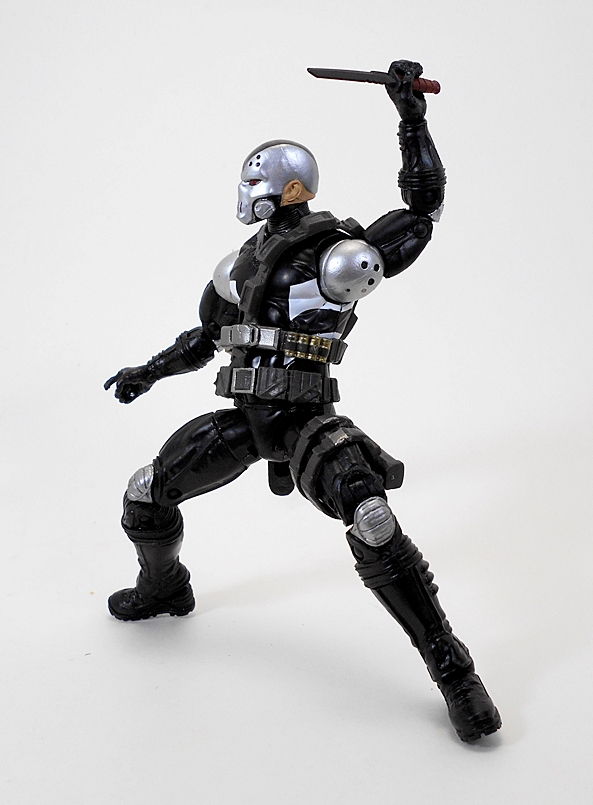 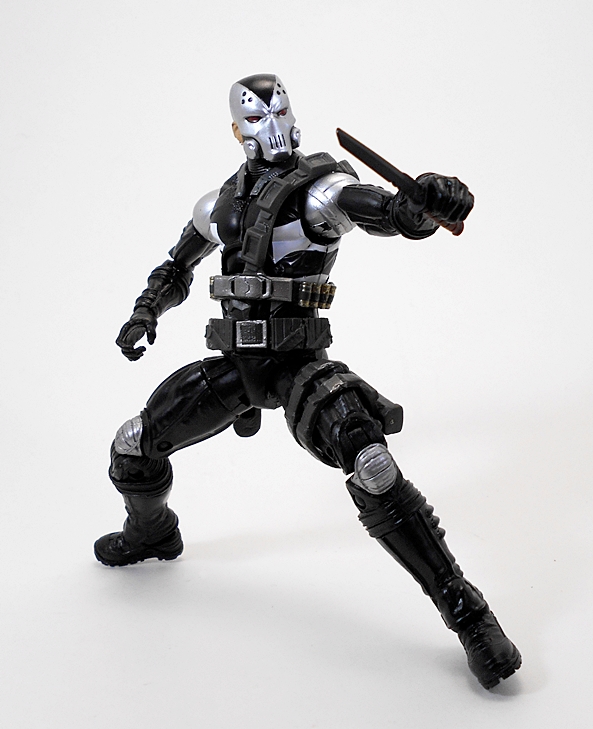 You get three weapons with Scourge and they’re all excellent. First up is the combat knife that fits into the sheath. This is a sweet little military style combat knife with a sculpted brown grip and a black tanto-style blade. He can hold it beautifully in his left hand. 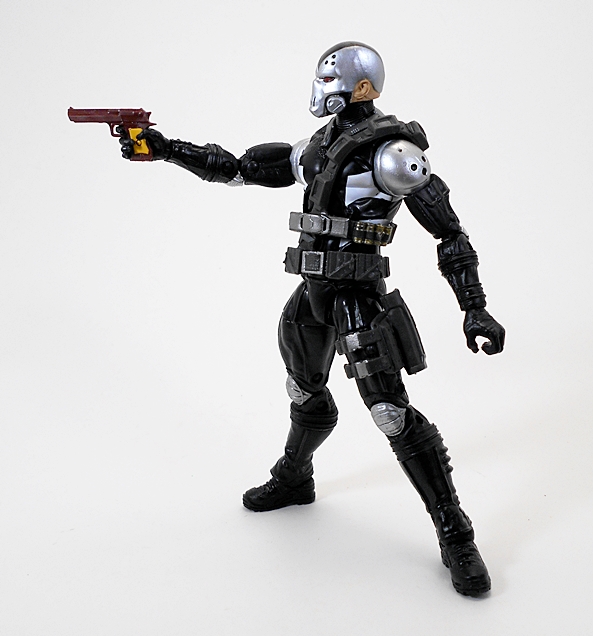 Next up, is the automatic pistol. The maroon and orange color scheme is certainly distinctive and the sculpt is spot on. Hasbro has gotten pretty funky with some of the pistols in this line now and then, but this sidearm is sized right and looks great in his hand. It also fits into the holster on his thigh.

Finally, when things get serious, Scourge can bust out his combat shotgun. This weapon features a solid sculpt and a deco that matches the pistol. It has a hand grip for the pump and some painted shells along the side of the receiver. 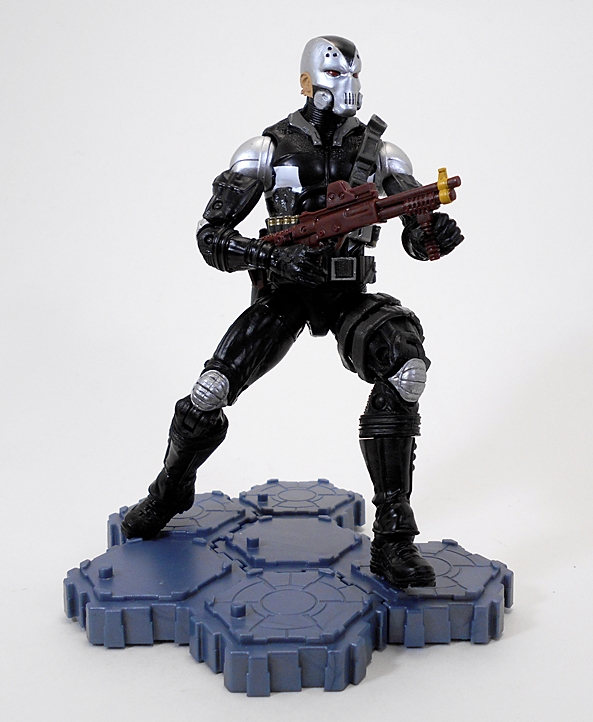 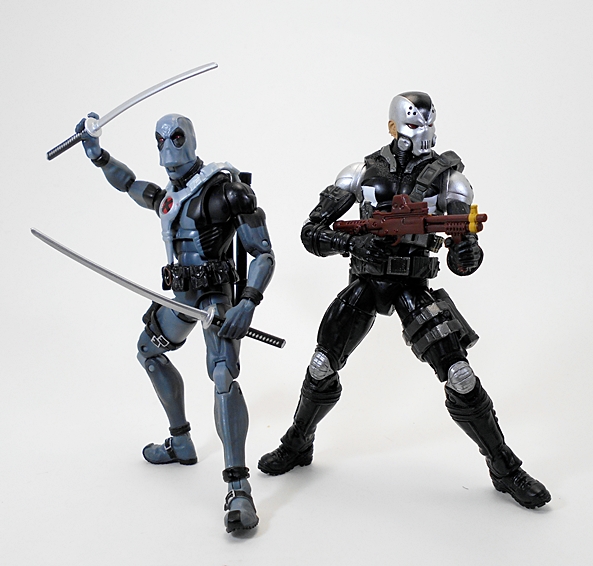 I started this feature with a little dig against Scourge saying I was saving my most anticipated figure for last, but I have to say, this guy is going to be a tough act to follow. He features an amazing sculpt, great paint, fun articulation, and some damn fine weapons. Scourge is an absolute home run in every category and he may indeed be the surprise breakout figure of this wave for me. He’s also a perfect example of why I think Hasbro needs to bring GI JOE to the 6-inch format. I think about the amount of fun I’ve had playing with this guy and I can only imagine a Real American Hero line getting the same style of treatment in this scale. I’d even be willing to full on subscription service for something like that, Hasbro, so long as the figures turned out as good as Scourge here. Anyway, it’ll be interesting to see if the last figure of the wave can beat this guy. I’ll find out next Monday when I finally open Taskmaster!