Strap yourselves in, kiddies, because it’s Star Wars Day and I’m celebrating by opening up the pile of 3 3/4-inch Force Awakens figures that I have slowly amassed and stacked in the corner. All eight of them! You’ve heard of speed dating? Well this is going to be speed reviewing. Quick and dirty. Let’s face it, while these figures are fun and all, they don’t require a lot of time. This will also help me to get caught up on the older figures so I can start hunting for some of the more recent releases that have been rather difficult to find. 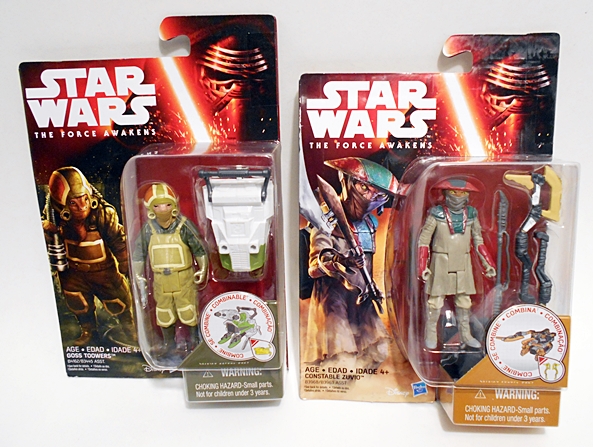 Here they are in the packages… God, I still love these packages! If I had to do it over, I might have considered keeping all my TFA figures sealed, because they really do look amazing on the cards. The character art is fantastic and the coloring is bright and catches the eye. If all I collected was Star Wars, I would have definitely picked up a couple of each and hung these things all over my walls. But, I’ve got a lot of figures to cover, so let’s get right to it and start off with…

X-Wing Pilot Ello Asty! Asty was a bit more than a background character, as he actually had a couple of lines in the film, and boy did I hate his voice. He sounded like an obnoxious 80’s cartoon character. Also, this is another X-Wing Pilot to go into the Resistance X-Wings I don’t have. I’ll confess, I wasn’t too excited to get him because I was expecting this to be a recycled X-Wing Poe with a new head, but it’s actually a distinctly different sculpt, so color me surprised. On the other hand, this isn’t a huge improvement over the crappy Poe figure either. The white paint on the vest shows some chips and I still don’t like the painted yellow visors.

Asty comes with a little pistol that fits into the angled holster on his left leg and he can hold it in either hand. I’ve got to try to keep an eye on this one, since I already lost Poe’s. The Build-A-Weapon piece can peg into his back and double as a pretty cool winged jetpack.

Next up is General Hux. I haven’t been able to add him to my 6-inch Black Series collection, so I guess this little guy will have to do for now. He’s a really nice figure. The head sculpt isn’t a bad likeness for this scale, the hat looks good and he comes complete with those epic sideburns and his even more epic space lapels! The silver First Order emblem on his shoulder and striping on his sleeves looks sharp. I also like the way they worked the trench coat into the 5-POA style.

Hux comes with a tiny pistol, which can be held in either hand, but there’s no holster for it. His weapon piece is… surprise! Another jetpack! I actually dig this piece because it looks like it can double as a drone or flying droid. The next figure I opened is the Snowtrooper and it occurs to me that I already reviewed him a little while back. This is a second one I bought so that I could do this…

Yeah! Hux looks bitchin’ when flanked by a couple First Order Snowies. Also, I’d be totally lying if I said I was going to stop at just two of these guys. It’s a really great little figure.

Next is The Guavian Enforcer is one of my favorite new designs in the film. I don’t mind that they had short screen time. That’s all part of the fun of Star Wars and universe building with action figures! This is a fantastic sculpt with a crazy amount of detail all over his outfit. It’s hard to believe the X-Wing pilots and this figure are part of the same series because they vary so much in quality. The coloring here is great too. Not only does the deep red and black deco look great, but the paint is all sharp. He’s definitely one of my favorite figures in this line, and I’ll have to pick up some more to form my own little Death Gang. 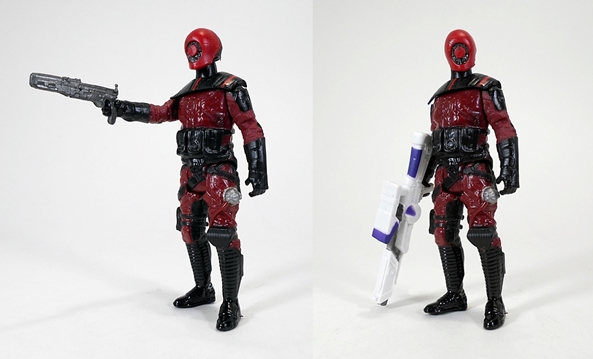 The Enforcer comes with a short blaster rifle that he can wield in either hand. His weapon part is a large white and blue sniper rifle. He can hold it just fine on its own, and it can also combine with Hux’s drone. 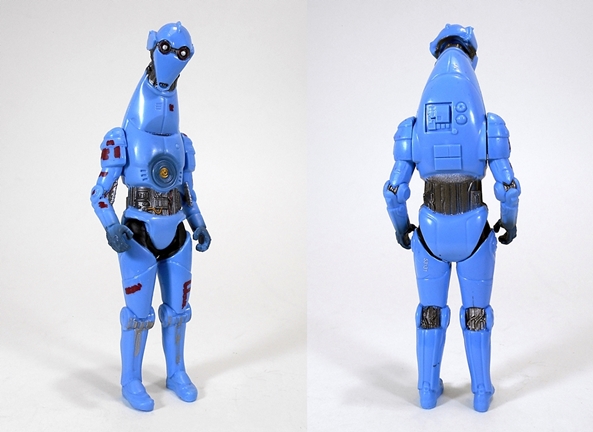 Next is the Resistance droid PZ-4CO. I was very anxious to pick up this guy because a love collecting droids in this scale. Also, let’s face it. Apart from BB-8, this is the only other 3 3/4-inch droid we got out of the movie. 4CO is a delightfully bizarre design that’s basically a variant 3PO body with a long hunched neck. I love that the body is similar to 3PO’s, but still a brand new sculpt and the head is really cool. There’s some nice detailing all over this guy and the blue plastic with gray and red paint apps look great. 4CO comes with a pair of boosters that can attach to the figure’s legs. I hate them and immediately cast them into The Bottomless Tote of Forgotten Accessories! 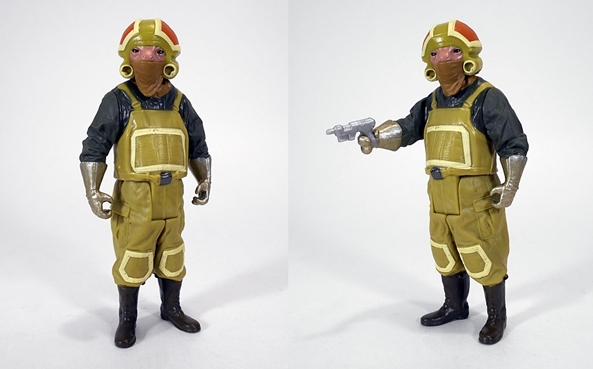 And how about Goss Toowers? Like more than a few TFA figures, I had no idea who this guy was until I read the back of the package. Apparently, he’s a mechanic that worked at the Resistance Base. I’ll have to watch my Blu-Ray again and see if I can spot him. I have virtually nothing to say about him. He’s not a bad figure, just kind of a dumpy looking alien with a helmet and overalls. It features a decent sculpt and OK paint. The fact that you can only see his eyes reminds me a bit too much of Constable Zuvio. He comes with a small laser pistol, which may replace the one that belonged to X-Wing Pilot Poe’s, which I lost. Hey, if the Ugnaughts were good enough to get figures and stand on my shelf, than Goss Toowers can too. Oh yeah, his Build-A-Weapon part is a giant component with a tiny handle that looks ridiculous if he holds it. It too is getting banished to TBToFA!

Did someone say Constable Zuvio? Well, here he is! By receiving a figure and not actually being in the movie for more than a frame, he has probably garnered more attention than if he were to have been a co-star. I don’t care about his conspicuous absence. He’s a cool looking alien and I’ve already created an elaborate backstory for him in my head. His 6-inch Black Series release was a solid figure and this little guy is too.

Zuvio features a removable backpack and his staff-gun-poleaxe thing. His Build-A-Weapon parts are a pair of axes. I like these, mainly because you can shorten the handles into pegs and he can hold them pretty well. I think I have all the parts to build whatever it is they go to, but I’m not motivated enough to find out. How many figures is that so far? Seven? 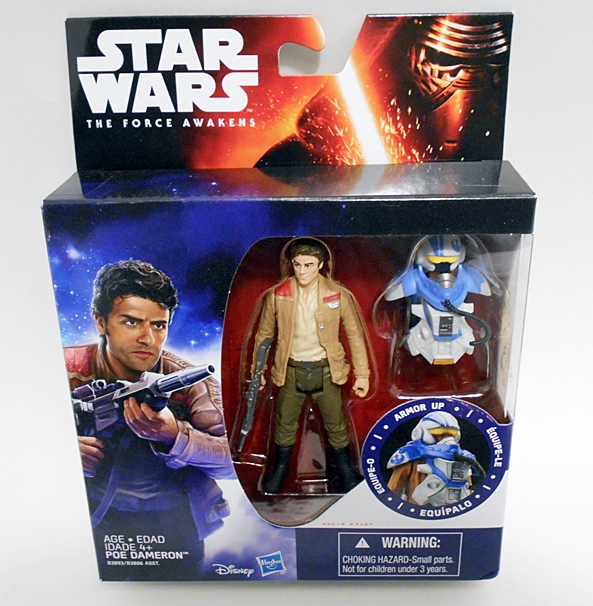 Well, just to prove I can count to eight, I’ve got one more figure to open up. This is Poe Dameron in his Resistance outfit and also one of the boxed “Armor Up” figures. Unlike the carded figures, these packages are collector friendly. They feature the same great looking style of colorful character art as the carded figures, although they take up an awful lot of space for just a 3 3/4-inch figure and accessory, so I don’t plan on keeping it. 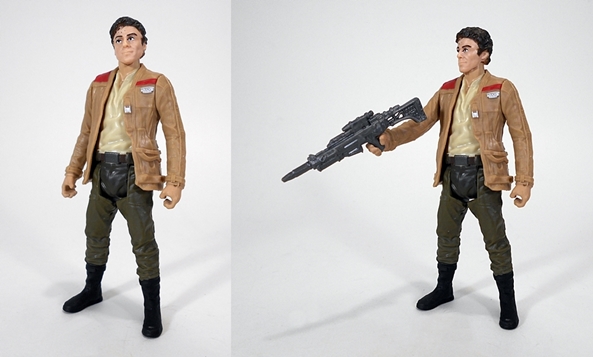 I’m not a big fan of this “Armor Up” gimmick, which explains why Poe is the first one of these I bought. Unfortunately, I believe this is the only way to get Poe in his Resistance outfit in this scale. The head sculpt is laughably goofy at certain angles, but passable at others. Either way, I think this is a better likeness than the 6-inch Black Series figure, and that’s kind of a sad commentary on how hit-or-miss that line is. Poe comes with an impressive blaster rifle.

I think it’s funny that Hasbro used separate sculpts and paints for the Poe and Finn figures, especially when these are supposed to be the exact same jacket. This is one of the few instances where it would have made more sense to reuse the jacket and arms and they blew it.

The Armor Up piece is some kind of space-suit jetpack thing. I’ll confess that I find this appealing in a goofy Expanded Universe kind of way. Not that I’d consider displaying the figure with it, or buying up any more of these. 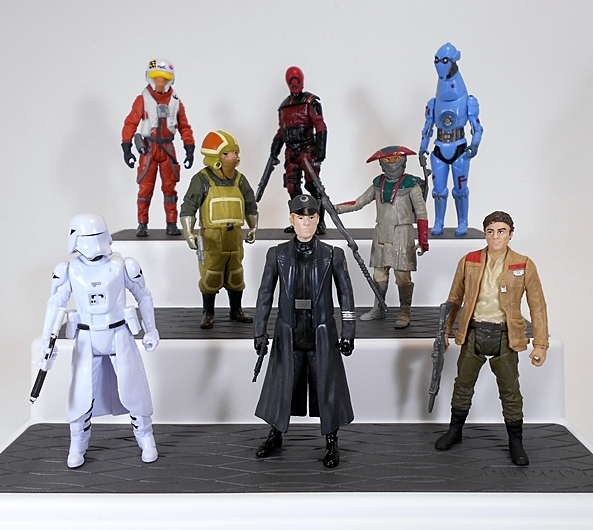 Phew! And that wraps up my May the 4th Figure Openingpaloosa while happily emptying out a corner of my Toy Closet. When it comes to 3 3/4-inch Star Wars figures, I keep coming back for more. My need to collect these things was imprinted in me at a young age, and I simply have no choice. I genuinely don’t even mind the 5-POA style any more. I think I’ve finally accepted it as charmingly retro. Either way, every time I open a new one of these figures I find myself wanting to hunt down more. There are still plenty of background characters that Hasbro could make, and I’m hoping that we may still see some more releases before things turn over to Rogue One merchandising.