It’s been almost a couple of months since I last looked at anything from Masters of the Universe Classics. But, last week I got a new package from Matty on my doorstep, so today I’m opening up Vultak, who’s motto should be better late than never. Or rather it seems that should be the motto of the Collector’s Choice 2016 line, since we’re seeing a lot of delays. I’ll confess, I don’t remember a lot about this guy, but with a ton of MOTUC figures now on my shelf, I don’t think there are any surprises left in this line…

…unless Vultak turns out to be an “Evil Flying Zookeeper.” Well played, Matty. I stand corrected. Well, at least there’s nothing new to say about the packaging. It’s the same awesome presentation we’ve been seeing all along, except for the lack of bio on the back of the card. Besides having a ridiculous title, Vultak is a member of The Evil Horde, and unfortunately made an appearance in the She-Ra Filmation cartoon, which meant that I was contractually bound to watch it for this Feature. The episode is called “Zoo Story” and it was about 24 minutes of pure agony. Despite having the word “story” in the title, there was no story, just a shallow mystery surrounding animals disappearing from the ironically named “Freedom Forest.” Who took them? Vultak, of course! Hordak’s Evil Zookeeper! What a cheat! How were we kids supposed to figure that out when we never saw this asshole before? 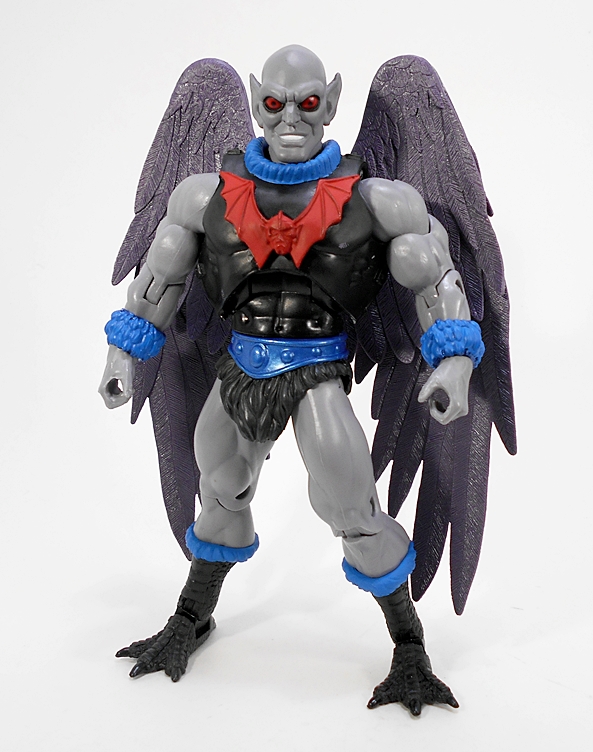 Anyway, the episode may be terrible, but Vultak is a pretty cool figure. He sports a standard buck, cast in gray, complete with standard belt and fuzzy diaper. The bulk of his costume comes from his black vest with red Horde emblem sculpted on the front and his abs are painted black to give the illusion that it’s part of the vest. He also has webbed reptilian feet, which I thought we’d seen before, but the ankle articulation makes me think they may be new.

Speaking of seeing things before, he’s also wearing the wings from Mattel’s DC Universe Classics Hawkman figure. Not a bad choice for recycling and they look really good on Vultak. The coloring on this figure is pretty basic, but makes for a very pleasing deco. The red Horde emblem combined with the blue paint for the wrist cuffs, boot fringe, and belt, really contrasts beautifully with the gray and black. The wings have a slight purple about them.

Besides the wings, the head sculpt is the real draw here. It’s not only a good likeness to the Filmation character, but it packs a lot of personality all on its own. Keep in mind, Hordak didn’t have this guy run the Zoo for wildlife preservation. He didn’t even do it so he could sell tickets and make a profit. He did it just because he’s a dick and wanted to keep a lot of animals locked up in cages. They literally point that out in the episode. Look into the face of this figure and you are looking at the type of degenerate that would run that kind of place. He looks like a real sicky who is way too proud of himself. Seriously, I love that he’s smiling.

You get all the usual MOTUC articulation, which includes rotating hinges in the shoulders, swivels in the biceps, hinges in the elbows, swivels in the wrists, ball joints in the hips, hinges in the knees, a waist swivel, a ball jointed neck, and an ab crunch hinge. The ankles are hinged and have lateral rockers that I believe are the ones introduced to the Club 2.0 2016 Filmation line. I’m not a big fan of the way they look, but the rockers are nice. Finally, the wings are hinged where they connect to the back and and hinged again to allow them to extend. 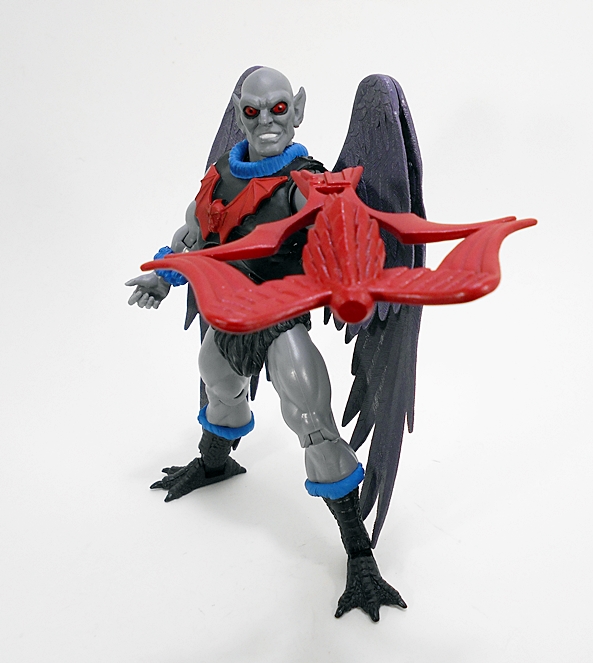 Vultak comes with two accessories. You get the ubiquitous Horde crossbow, but it’s a new sculpt with a feathered wing motif. Matty should consider releasing some kind of specialized weapons rack to display all the individual Horde Crossbows. They’ve had some really cool and varied designs over the years.

You also get a pretty cool leash with a collar that opens and then pegs closed. I don’t have any animals to put it on, but it also works for capturing Rebellion scum. Especially when they’re do-gooders trying to free the animals in your zoo. 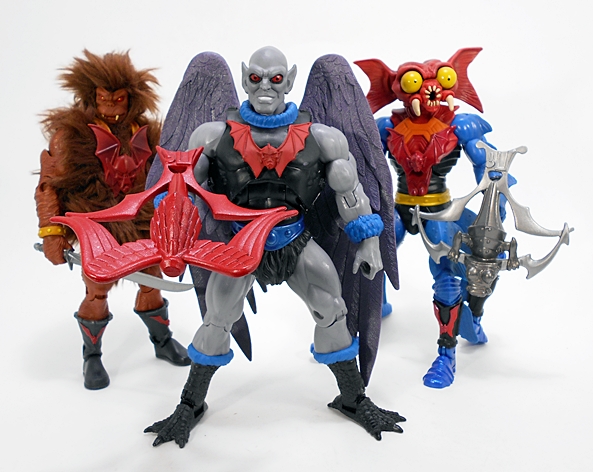 Will I ever grow tired of collecting these figures? Probably not. Vultak is as solid a figure as they come and he makes me happy that I subbed the Collector’s Choice line. While double dipping on animated versions of characters I have already was too much to ask, I’m glad we’re still getting new releases this way. Especially when they’re Evil Horde members like Vultak. I’ll take all the Horde figures I can get! Plus, getting my MOTUC shipments every other month keeps my Matty fix going a little longer until the Thundercats start shipping.