It’s Bishoujo time again and today I’m revisiting the Street Fighter line with a look at Poison. Poison is a character that I associate more with the Final Fight games than I do, Street Fighter, and that’s probably because of two reasons. First, all the controversy around her gender identity seemed to start with Final Fight, and two the fact that she wasn’t a playable fighter in Street Fighter until either Street Fighter X Tekken or Ultra Street Fighter IV. I honestly can’t remember, which came out first, but I think it was the former. As for the first point, it’s not really an issue here, as the Bishoujo line only includes chicks, even when the original subject matter is male (i.e. Freddy Krueger, Jason Voorhees, and the upcoming Edward Scissorhands). The second point isn’t an issue either, as I’m just happy to be getting this gorgeous statue of her. 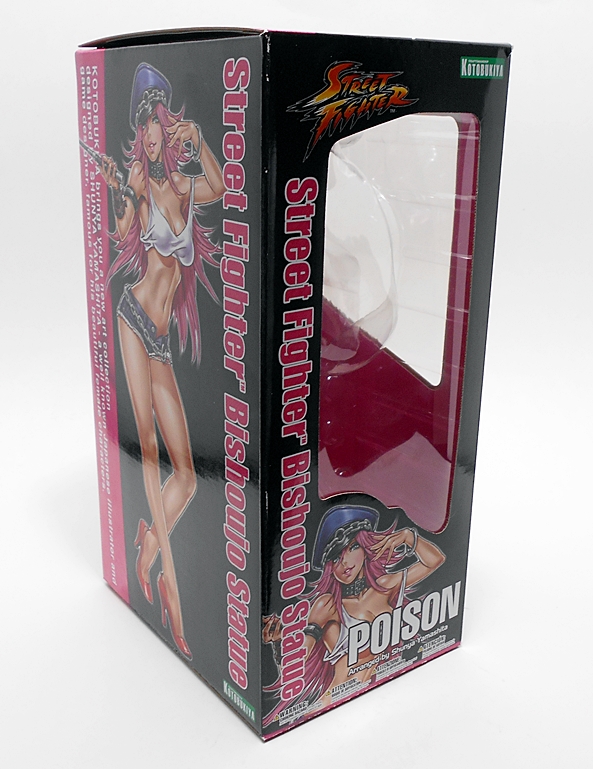 Poison comes in the typical Bishoujo Statue box with windows all around to let you see the statue inside, plenty of sultry art by Shunya Yamashita, and the black deco that Koto uses for the Street Fighter and Tekken themed statues. This one is particularly tall and thin, just like Poison! Everything is collector friendly. Alas, ever since I filled up an entire closet with empty statue boxes, I’m at the point where I have to pitch the plastic trays and flatten out the box for storage. Poison comes attached to her base and all ready for display, although there are a few options, which I’ll get to in a bit.

Um, wow! Yeah, I’m tempted to end it there, because I’m struggling to find other words. Poison is posed with her left leg kicking out a bit behind her, her left hand pulled up near her face, and her right arm extending outward and holding one of her accessories. In the case of most of these pictures I went with the handcuffs because it’s easier to get close with the camera and still get in the entire statue. The skimpy outfit consists of a very abbreviated tank top, a pair of cut-off jeans, red high heels, a leather collar, and a biker hat. There isn’t a lot to say about the costume, because there isn’t a lot of it. I dig the way they sculpted one of her tank top straps off her shoulder and over her arm. You also get some real chain used on her shorts and on her hat. Since Poison is wearing very little in the way of clothes, the quality of the skin tone is crucial here, but that’s never been an issue with Koto’s Bishoujo line and it certainly isn’t here. You even get some nice shading to pick out the detail in the muscle definition in her mid riff. Damn, this is one sexy figure! 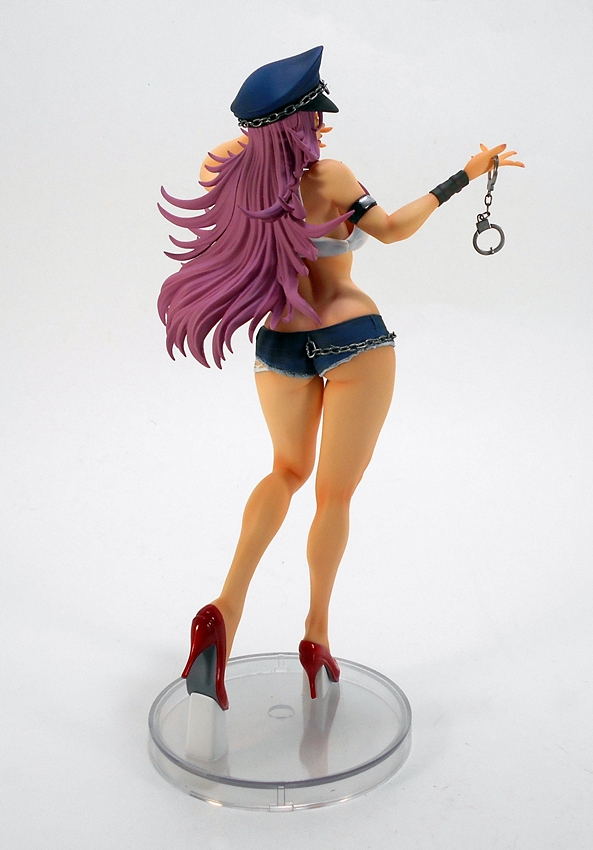 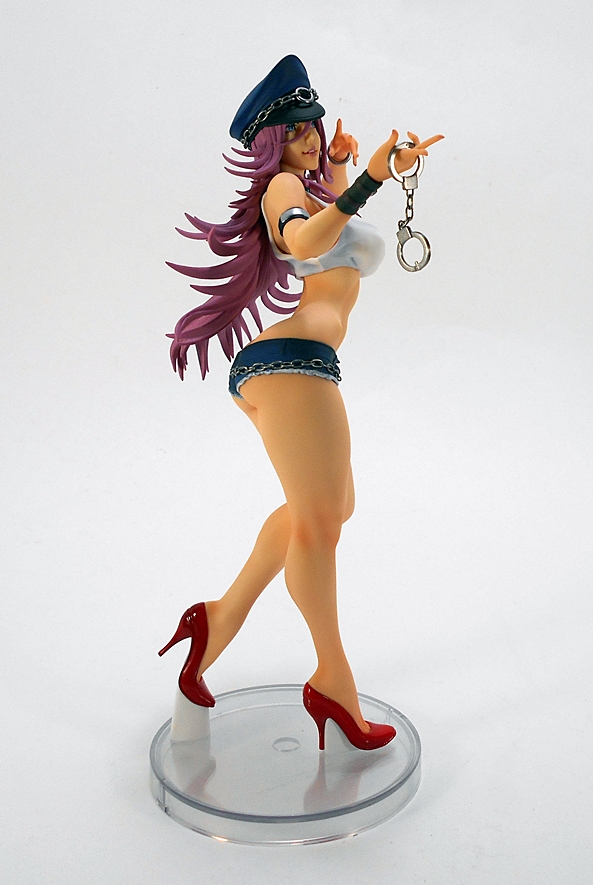 Poison’s purple hair cascades down her back all the way down to her butt, effectively covering a lot more of her than her actual clothes do. Some other nice touches on her outfit include the gorgeous red paint on her shoes, the wrist bracer on her right arm, which serves the double purpose of concealing the swappable hand, and the bangle on her left wrist. The paint apps on the buckle and rivets in her collar are particularly well done. 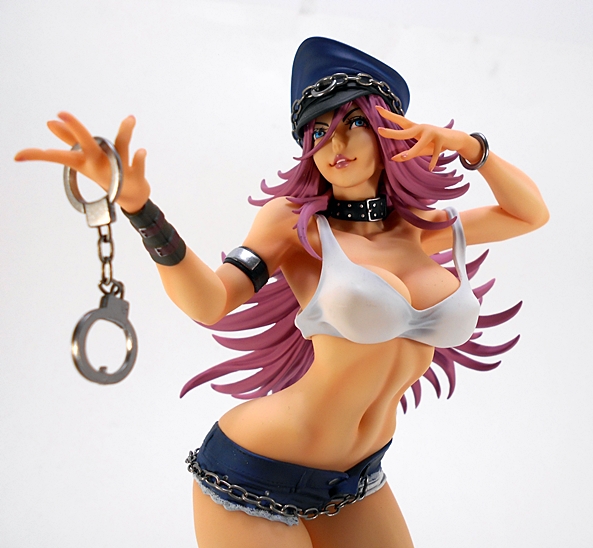 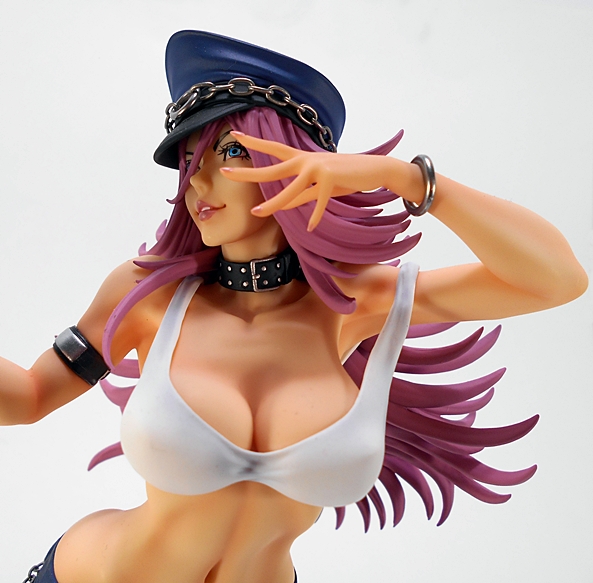 And that brings us to the portrait, which is simply amazing. No, I said the portrait… it’s the thing right above what you’re looking at now. This may be one of my favorite head sculpts of all my Bishoujos and that’s saying quite a lot. You do have to get down a little low to take it all in, because it’s partially covered by the visor on the cap and you also have some strands of hair blowing in front of it. The paintwork on the deep blue eyes and pink lips is as sharp and clean as ever.

As mentioned earlier, you get a couple display choices for her right arm. You can go with the handcuffs or the riding crop. Either of which carry on the overt bondage theme here. The riding crop is permanently attached to an extra hand, so it’s just a matter of popping out one and pegging int he other. The handcuffs, are not attached to the other hand, so you can tuck those into the chain on her shorts, which is where she often wears them in character art. I like the idea of being able to display both accessories on the figure at once, although the riding crop takes up a lot more display space. 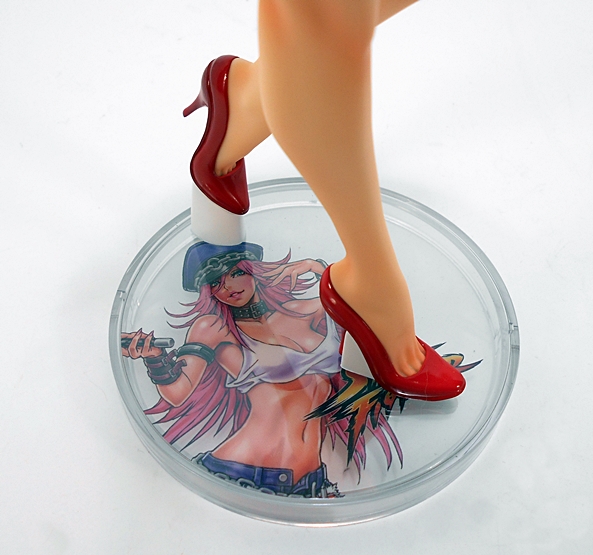 The Street Fighter line continues to use these clear plastic disks as stands. Like the Tekken statues, you can pop off the bottoms and put in either of two included inserts. One has the Street Fighter logo and the other some character art. I tend to go with the logo on these and the character art on my Tekken pieces. My only gripe about the stand is that the wedges that support her feet are white plastic instead of clear. Not a big deal, but hey, I figured I had to nitpick something because otherwise this statue would be perfect.

Another Bishoujo and another win for both Kotobukiya and my display shelves. I actually had Poison pre-ordered, so I spent the full retail of around $60 on her and I’m perfectly fine with that. But, Bishoujos haven’t been selling out like they used to, so chances are she’s available for a good $5 to $10 less if you hunt around for her. She’s only the fifth release in the Street Fighter line, but I’ve been all-in for this line so far and I don’t see that changing any time soon.