It finally happened! My second and final box of joy from Boss Fight Studios arrived with my remaining Vitruvian HACKS figures. I’ll be looking at those soon, but before I get to them, I have one more Exclusive figure to check out. I already Featured the Kokomo Toys Amazon Elite and this time I’m looking at the New Jersey Collectors Con Ultimate Spartan Warrior. Damn, I lived in NJ for the first 21 years of my life and I don’t remember ever seeing any toy or collectors conventions until I moved 1200 miles away. Aw, that’s not fair!!! There’s nothing like that where I live now. NOTHING!!!

The figure comes in the same style box as the other Exclusive with the figure on a tray inside. It features some monochrome line art and blurbs about the character on the back. It’s certainly not as flashy as the regular release packaging, but it gets the job done, I like the artwork, and it’s damn surprising how many goodies this tiny box can hold.

Yeah… seriously. This guy is more like a weapons pack with a figure thrown in! You get four helmets, two shields, five swords (one with a scabbard), two axes, and an extra pair of fists with the hinge on a different axis. This is a huge chunk of a the entire Vitruvian HACKS arsenal all in one neat little box. 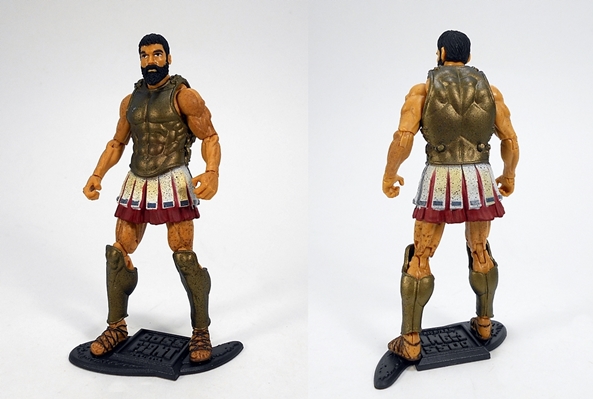 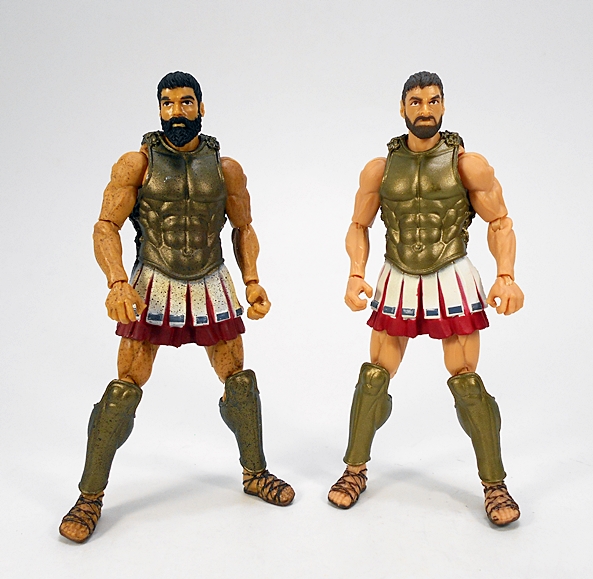 But that’s not to devalue the figure, because the Elite Spartan (shown on the left) is a mighty damn cool. From the neck down, this guy features the same sculpt and articulation as the regular Spartan Warrior, so I’ll refer you back to that original Feature for more details. The big difference here is that the Exclusive is all muddied up with some paint spray that overall looks pretty good. I think the stuff on the white strips around his “skirt” ventures into Hasbro’s unfortunate POTF2-era weathering territory, but the stuff on his skin and armor looks fine. The head sculpt is also new, as this guy has a bushier beard. The vanilla Spartan Warrior was a solid release minus some mushy knees, this one feels a little better in hand. Let’s talk helmets… 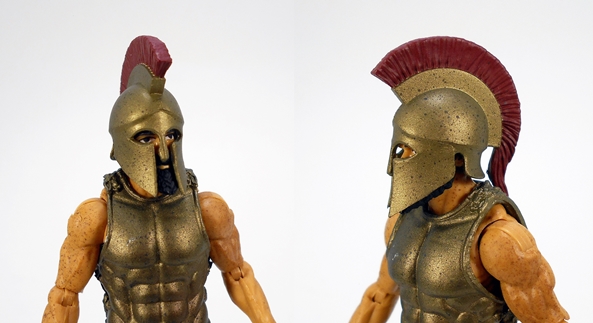 Four helmets is above and beyond, Boss Fight! We start off with a variant of the one that came with the Spartan Warrior. It’s not as shiny and it’s splattered with mud. 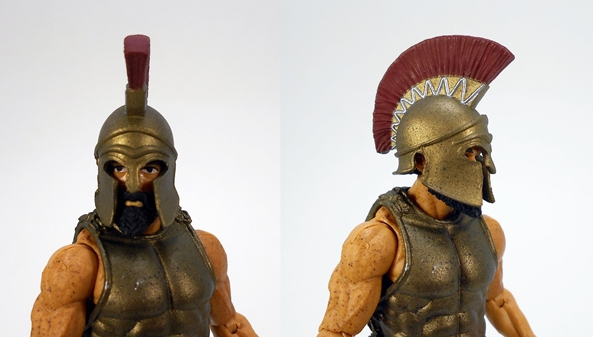 Next up we get a fully painted and non-petrified version of the helmet that came with the Cursed Stone Spartan. I’m really happy to have a regular version of this one as it has a little more flourish to the design than the regular.

Third is this one, which is my least favorite in terms of design, but easily the most impressive in terms of sculpt. This one is a new piece to me, as it was not included in any of the original assortment of four figures, but I’m pretty sure I have it coming in one of the figures I’ve yet to open.

And lastly, there’s the good old fashioned Barbute, for when you’re less worried about fancy plumage and just want to keep your noggin from getting bashed in or your ears and nose cut off. This looks like it’s the same mold used for the silver helmet that came with the Amazon Elite.

Moving on to the shields, we’ve seen these before. The first is the same one that came with the regular Spartan, whereas the other is the beautifully sculpted Medusa head shield that came with the Cursed Stone Spartan. Once again, this is another piece I’m really happy to have in a non-petrified version. It looks fantastic with the bronze finish. The shields use the same soft plastic sleeve with grab bar to attach to the figure’s arm. It can be tricky to get the grab bar to work, but it can be done. On the other hand, it’s not necessary, the shield can be warn perfectly fine with just the arm passed through the sleeve. It all depends on how accurate you want it to look from the other side.

Weapons! Some of these weapons were included with the regular Spartan Warrior, so we get the same spear. as well as the matched long and short swords. These are fantastic little accessories with some phenomenal paint. 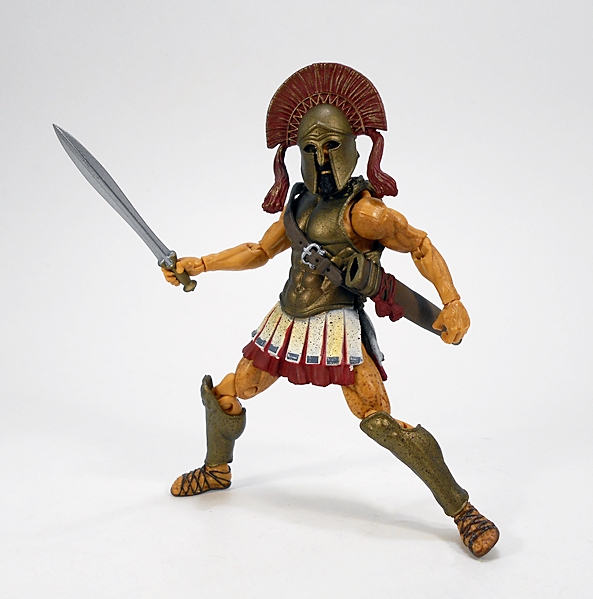 You also get the scabbard and shoulder strap that we saw with the Spartan Warrior and a new sword to put into it. This one has more of an Etruscan type hilt. The scabbard fits the figure quite well an the red paint on the tassels and the silver paint on the buckles is all very sharp.

The fourth and fifth swords include a repaint of the broadsword that came with the Amazon Elite and a Falcata, which was not in any of my initial four figures, but it may very well be included in one of the figures I’ve yet to open. The Falcata has a bronze colored blade and a brown grip. No doubt about it, if you love swords, this box has plenty of blades to make you happy! 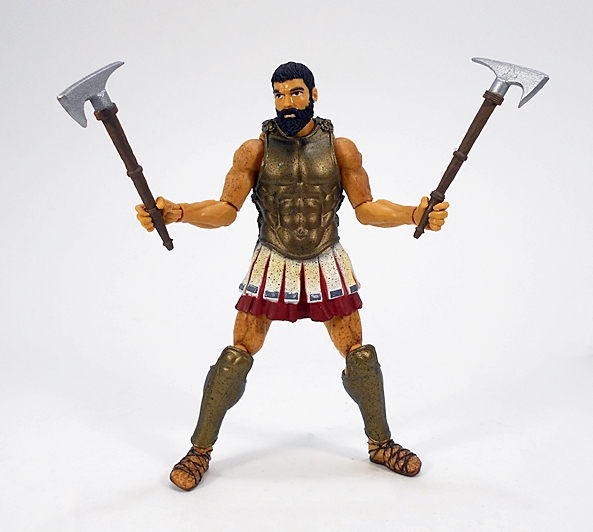 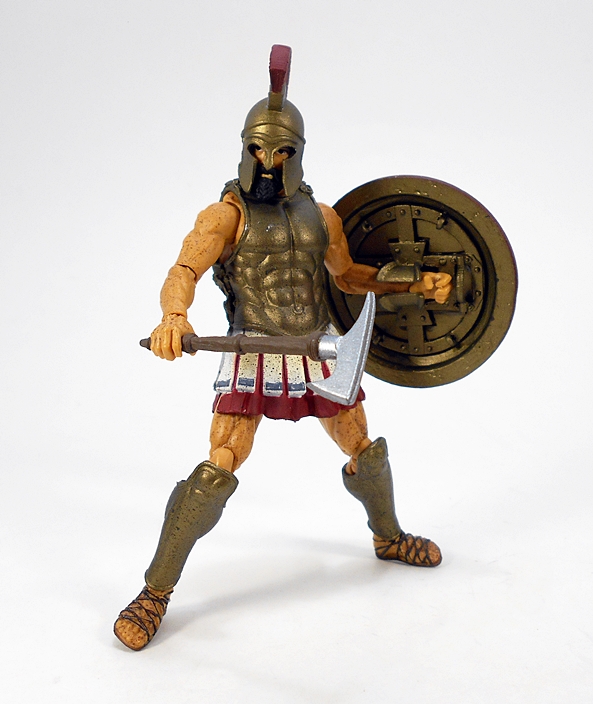 Let me axe you a question… do you like axes? Good, because you also get the pair of axes that came with the Amazon Elite. Phew! That’s a lot of accessories. Oh yeah, you also get the stock Boss Fight Studios figure stand that comes with all of the HACKS figures. 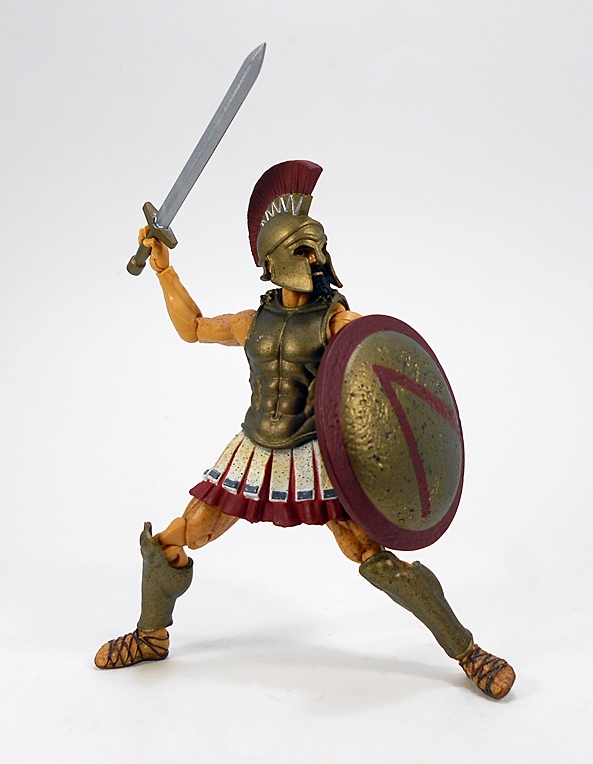 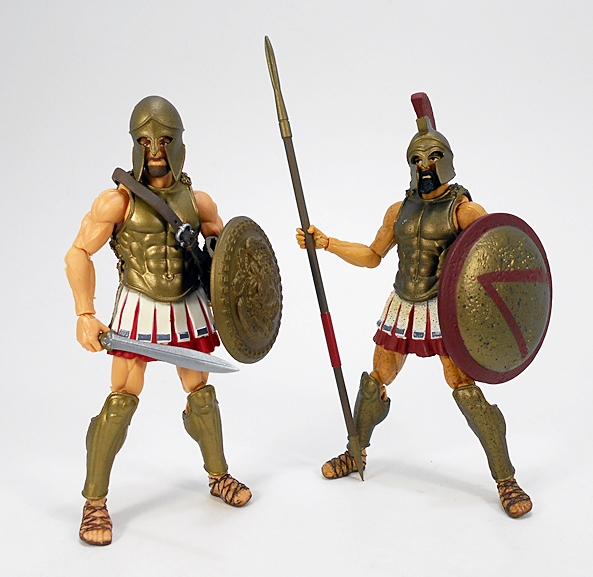 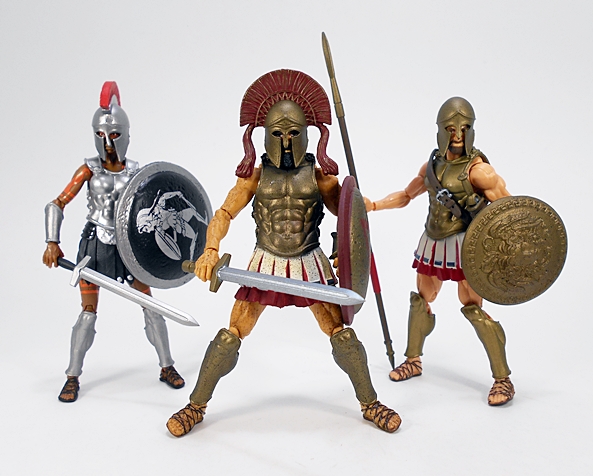 Like the Exclusive Amazon Elite, this figure was really easy for me to get on Ebay and at $30, I really don’t feel like I had to pay that much of a premium. They were sold directly by the NJCC, so there wasn’t any scalping padding the price. Considering the regular HACKS are about $20, I’m happy to pay the extra $10 to get what is basically a beefy accessory pack. I suspect that all of these weapons can be found scattered across the other HACKS releases, so technically what’s new in this Exclusive? It’s the dirtied up deco on the figure and some of the equipment. But HACKS is a line that gets better with sharing and the bigger the pile of arms and armor the more fun these get. The Ultimate Spartan looks distinct enough to stand beside the regular Spartan and bolster my ranks and I’m sure glad I got him.

Next week, I can start digging into the rest of the regular release figures!