If you came of age in the 8-bit video game era than you already know what run-and-gun platforming perfection looks like. If you didn’t, than here’s a visual aid…

That’s right, motherf’cking Contra on the Nintendo Entertainment System! It rocked hard than and it still does. It remains one of my go to games and I still play it frequently because the music is fantastic, the action is frantic, and it brings me back to simpler times when all you had to worry about was a jump button, a fire button, and not getting hit. Of course, that was easier said than done. I was already 16 when this cartridge blazed its way onto the NES. By then, I had a solid eight years of video gaming under my belt and I still had never played anything quite like it. It was tough as nails and the alternating perspective was a nifty trick for its time. This game was undoubtedly the shit, but we’re here to talk about toys, not video games, so let’s check this out…

You’re looking at the packaging for Private Bill Rizer and Lance Bean in glorious action figure form, lovingly crafted by the fine folks at NECA toys. And let’s not forget Konami, who apparently licensed it out and then fought them every step of the way. They were so uncooperative and difficult to work with that NECA claims to have sworn off dealing with them ever again. Yup. Did you see those early shots of the 8-bit version of Castlevania’s Simon Belmont? Well, forget it. It’s gone. Thank Konami for that. But I don’t want to dwell on the bad stuff. This is a day to be celebrated, because it genuinely looked like this pair of figures would never see the light of day… and yet here they are! 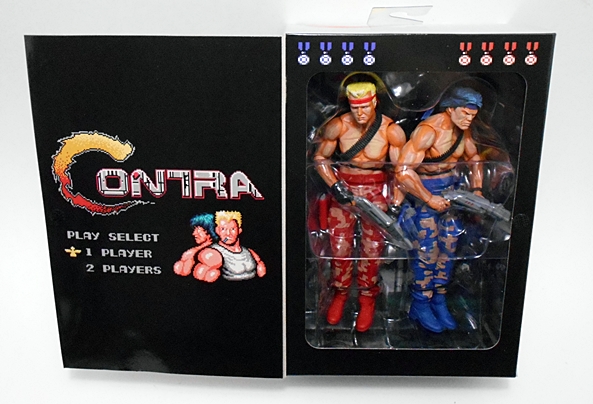 The packaging is very reminiscent of NECA’s other video game figures as well as their Ultimate line. You get a big beautiful box that in this case looks like an over-sized box for a Nintendo cartridge. You get the beautiful retro artwork on the front and an opening front flap that shows you the player select screen on the reverse and a window displaying the figures inside. The back has a little blurb about Contra and shots of the figures set up to look like screenshots from the video game. The figures come on one tray and there’s a second tray under it with a whole bunch of extra goodies. Naturally, everything is collector friendly, so you don’t have to ruin this fine presentation to get at the toys inside. 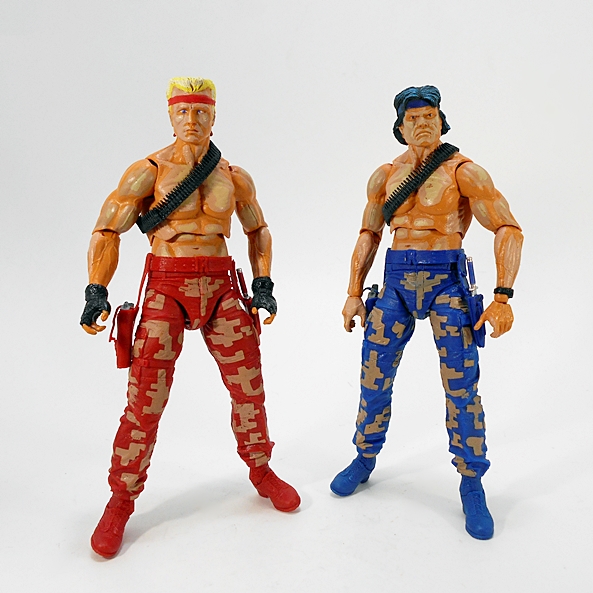 And here they are. If you aren’t up on the characters, That’s Bill Rizer on the left with the blonde hair and red outfit and Lance Bean on the the right in blue. Don’t feel bad if you didn’t know. I’ve been playing this game for decades and even I had to look it up. From the neck down, these are the same sculpt, with the exception of Bill having gloves and Lance going without. I’m guessing NECA borrowed some or all of these from either the Rambo or possibly the Predator Dutch figures. Sadly, I don’t have either in my collection to verify. They come shirtless and advertising their 80’s action hero manliness and wearing combat fatigues and boots. The head sculpts are bursting with personality. Bill looks a little confused, like he’s trying to remember the Konami Code, whereas Lance looks like the most pissed off guy I’ve ever seen in my life. Superb! 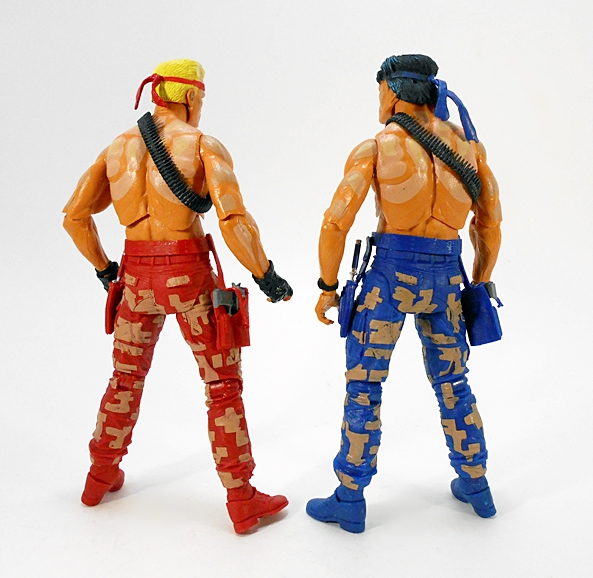 The coloring on these guys consist of some great digital 8-bit camo on the pants and some white wash on the skin to further drive home the video game look. The red and blue used for the pants, boots, and headbands are both vibrant and beautiful. Each figure also includes an ammo bandoleer strap across their chests. The articulation here is pretty standard for NECA’s modern figures. You get rotating hinges in the shoulders, elbows, wrists, hips, and knees. You get both hinges and lateral rockers in the ankles. The torsos have ball joints in the waists and below the chest, and the necks are also ball jointed. In short, these figures are loads of fun to play with! 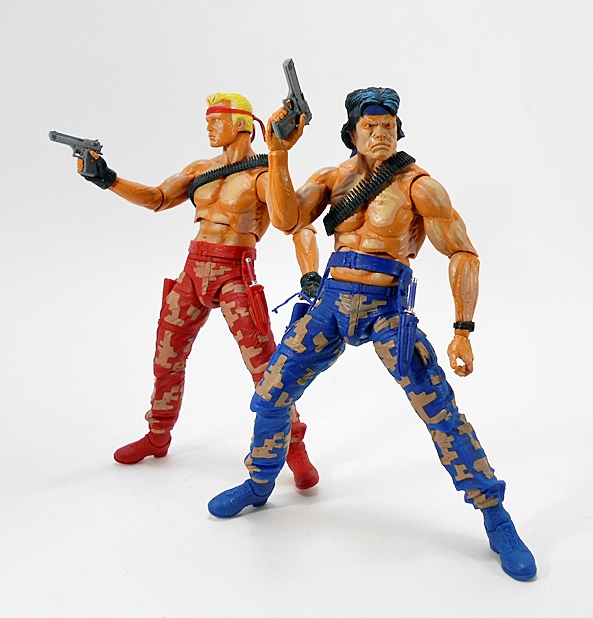 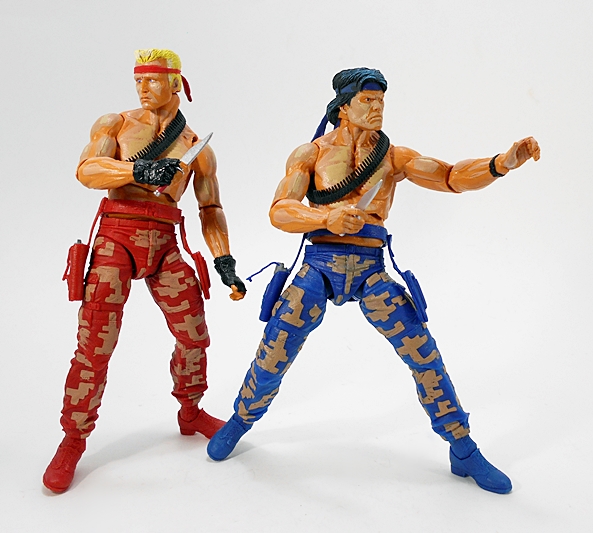 The figures include belts with holsters for automatic pistols and sheathes for combat knives. I wasn’t expecting either of these accessories, so they come as very welcome treats. You get some very nice painted detail on the pistols and the knives have bright silver blades and handles painted to match each player’s color palate. The hands hold the guns beautifully, but they clearly aren’t designed to hold the knives. I was still able to make them work. 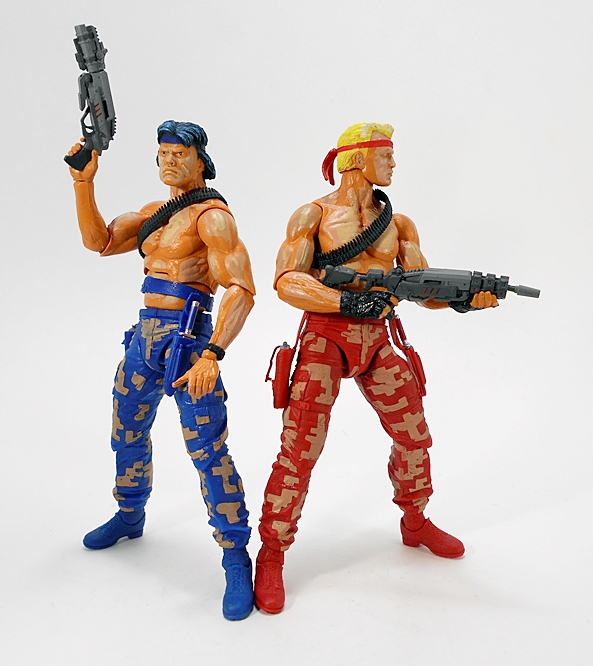 Of course, the pistols and knives are just fallback weapons. These babies are the real hardware! Each figure comes with the same base gun, but with attachments to set them apart. Bill’s gun comes with a removable muzzle and stock. The stock also extends and collapses. Lance’s comes with a double-barrel muzzle attachment. Both guns have fold down stands, possibly meant to be similar to bi-pod rests. The customization on the guns is something else I hadn’t expected to see in this set and it’s a great surprise, which adds some play and display value. And speaking of which, how about that other tray of extra parts?

The tray consists of a whole bunch of effect parts, as well as the previously mentioned stock for Bill’s gun, and what I like to call the Power Up Football. There are some great pieces in here, and one piece that doesn’t quite pan out as well as I had hoped.

The Power Up is pretty simple. It’s a great likeness to the floating Power Up in the game and it can be displayed “levitating” on the clear stand. Unfortunately, the base for this stand is shared by another piece in this set, so you can’t really display everything at once. But I’ll come back to that in a bit to explain how that isn’t a problem for me.

The first of the effect sets consists of these simple shot pieces for Bill’s gun. These peg into each other like a chain, so you can have one shot, two or three, however you want to display it. I think the effect here is pretty damn cool. 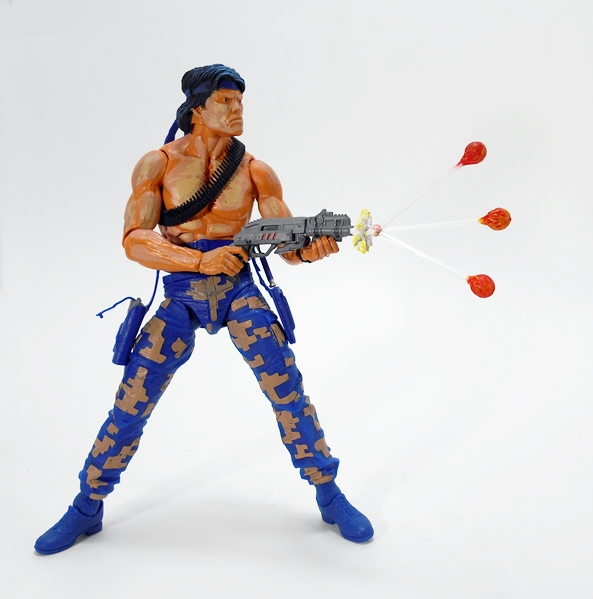 You also get a three-way spread shot piece for Lance’s gun. The explosive effect plugs into the barrel and again, this is a great looking effect. If you want to go full spread shot, that’s an option, albeit sadly not an ideal one.

Yes, this huge piece simulates the extension of the spread shot effect and I think it looks awesome here. Unfortunately, I had to use a lot of trickery to make it work. The piece was very warped when I took it out of the tray, mainly because the plastic is so very thin. It’s designed to plug into the same base that the Power Up uses, but when I plugged it in, it just leaned to the side. It’s possible it could be straightened with some heat, but considering how tenuous the plastic is, I wasn’t about to try it. In the end, I had to cobble together a bunch of pieces from a Bandai stand kit to get it to stand straight so I could take the highly doctored picture above. I’d be interested to see if the issue is common to all sets or just mine. It was a nice idea, I’m glad they tried it, but in the end, it just doesn’t work out all that well. So, sharing that base with the Power Up won’t be a problem after all.

But believe me when I say that I in no way want to end this Feature on a downer, because these is an unbelievably cool set of figures and I can’t even express how happy I am that NECA was able to make it work and get them into the hands of us collectors. I picked this set up off of NECA’s Ebay store for about $55 shipped and I couldn’t be happier. There were times when I practically chewed my fingernails down to nubs reading some of NECA’s tweets about whether or not these were actually ever going to happen. It’s sad that NECA and Konami had to part ways over this release, but if you’ve followed gaming news lately, than you already know the folks in control of Konami have lost their god damn minds. Still, this set opens up so many other possibilities. Damn, I’d love to see Double Dragon get this exact same treatment!

6 comments on “Contra: Bill Rizer and Lance Bean by NECA”