Here I go, busting into the second wave of Titans Return Deluxes and I decided to go with Chromedome first. This is an interesting wave for me as I happen to own the Fansproject unofficial versions of each of the figures in this assortment and I’m excited to see how Hasbro’s versions turned out. Still, I’m going to try avoid comparisons, because it’s only fair to evaluate these new bots on their own and not how they stand up to far more expensive third party figures.

I’m still not a huge fan of this card art and layout, but I sure was glad to see it on the pegs when I stopped in the local Wally World for some groceries. These Deluxes have been really tough to find in my area and forget about any of the larger boxed figures. I had to go online to get the first Deluxe wave, so stumbling across all of wave two in one shot at an actual brick-and-mortar store that is not known for having anything good ever was quite the pleasant surprise. Chromedome is packaged in his robot mode, but as always, we’re going to start with his alt mode.

In auto mode, Chromedome does a beautiful job recreating, and slightly tweaking, the look of the original G1 toy. I was never sure what they were going for with this design, but I’ve always experienced a weird retro-future-muscle vibe from it. Nonetheless, I liked the creativity in alt modes that spewed out of the waning years of G1 and this design still reflects that. This new version is a little better proportioned and lacks those awkward arm-pylons on the sides as well as making the hood near the windshield a little less bulky and awkward. The mold consists of some panel lines, but nothing too crazy. Overall, I think fans of the character will be pleased. 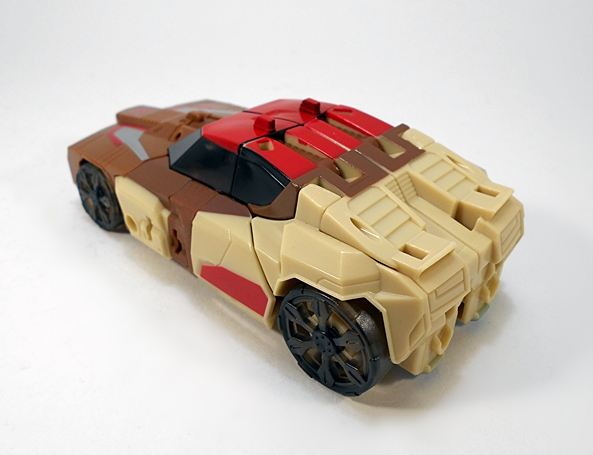 The toy retains that same distinctive brown, tan, and red deco that no one in their right mind would ever think to put on a car, and yet obviously somebody did. Most of the deco here is achieved through colored plastic, although the paint on the roof and side panels is a very nice high gloss shade of red and the headlamps are painted blue. You also get some silver and red tampos on the hood, which replicate the original toy’s stickers, and a bold Autobot emblem. The cockpit is hinged so that it can either open by swinging straight up or you can sort of lift it and hinge it backwards to give it a more stylish way of opening. 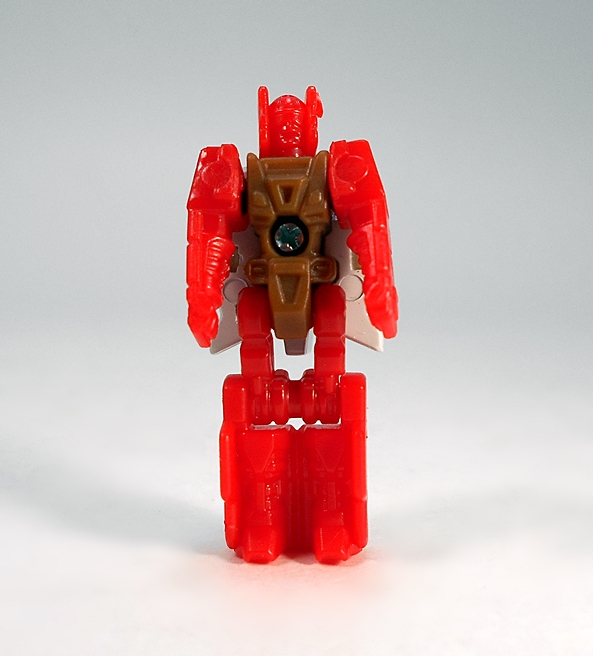 And speaking of stylish, meet Stylor, Chromedome’s little Headmaster buddy. His robot mode is pretty standard stuff with articulation in the shoulders, hips, knees, and neck. His deco matches that of his larger robot chum. Unfortunately, Hasbro didn’t spring for any paint apps on this one, which was one of the most impressive things to me about the first wave of figures. I liked the tiny painted faces. Also, the red plastic looks kind of cheap. Aesthetics aside, Stylor does sit comfortably in the driver compartment of the vehicle.

There are two weapons which can plug into the sides of the car mode in a few combinations. One is a standard gun, while the other becomes a sort of sidecar gun for one of the tiny bots to ride in. You can also plug the regular gun into it and there are tabs on the roof where it can plug in as well. 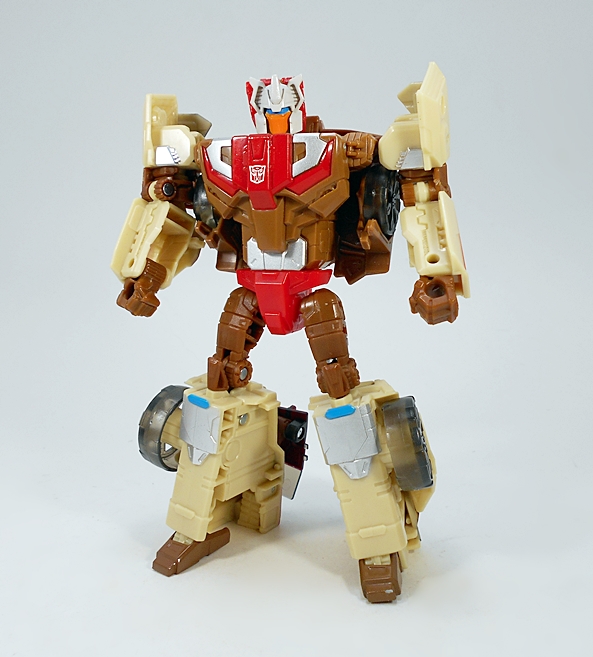 Transforming Chromedome feels really familiar and that’s because the figure borrows heavily from the Combiner Wars Stunticon engineering, particularly Dead End. The half-elbow hinges in the arms, the way the legs unpack, and the chest plate that folds down to cover a non-existent combiner link. In that sense, this figure feels like a throwback to a line that just ended, but does that make for a bad robot mode? Not exactly.

I actually like this robot mode quite a bit, but then I was overall rather fond of the CW Stunticons. Chomedome is a very solid update to the original figure. The hood packs away neatly on his back and the the canopy parts fold up on the backs of his legs. Chromey suffers from some hollow forearms, but the legs aren’t have panels to fill them out better than most of the wave one figures. I’m also happy to say the robot mode features some very nice red and silver paintwork, which feels like a big step up from the lack of coloring on some of the figures from the last assortment. 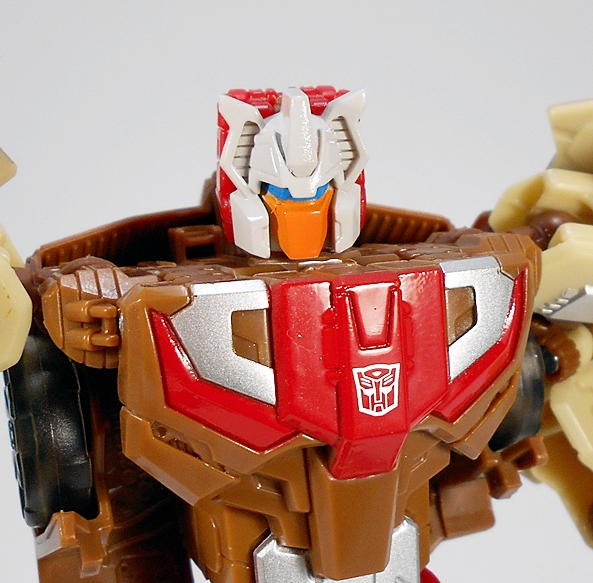 Stylor makes for a great looking portrait. Yeah, the red back kind of makes it feel like the face and “helmet” is tacked onto the head, but it works well enough for me. I like the coloring, particularly the blue visor and orange face plate, but my figure has a bit of mold flashing that needs to be cleaned up. 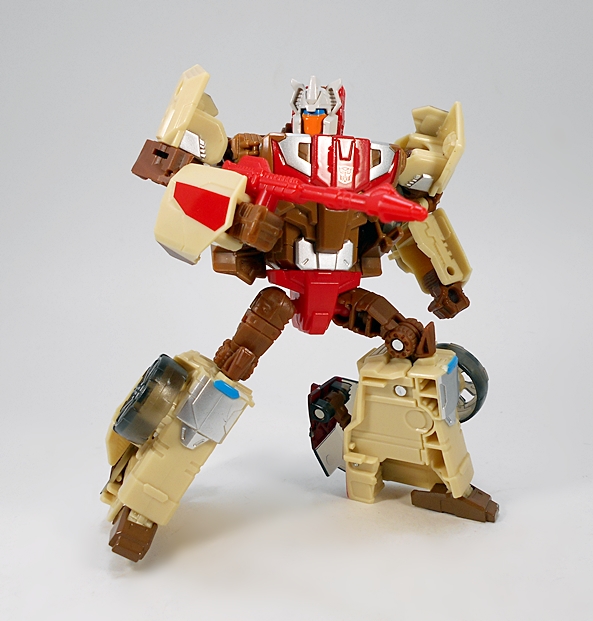 Of course, the guns can be wielded in robot mode and even combined if you want something bigger and kind of goofy looking.

Chromedome is a solid figure and I’m happy to have him, but after seeing the Stunticon style engineering so many times throughout the Combiner Wars run, it feels a little cheap and sleazy to get a retread of it again in Titans Return. Yes, I do respect and admire Hasbro’s ability to design molds that can be re-purposed, and while it definitely works here as Chromedome, it doesn’t feel terribly clever. Considering how popular this character has become from the near-perfect comic run of More Than Meets The Eye, I think this is a figure where the mileage may vary greatly and some collectors aren’t going to be nearly as forgiving as me.

One comment on “Transformers Titans Return: Stylor & Chomedome by Hasbro”