Holy crap, it’s Wednesday again and time to check out another figure from The Four Horsemen’s magical, mystical, and certainly mythical line of kickstarted 6-inch scale fantasy figures. Phew, that was a mouthful. What do you say? Time for another Orc? Yeah, let’s do another Orc…

After looking at well over a dozen figures, I’ve said all there is to say about the packaging in this line, so let’s take a quick look at the bio. Urzokk is what you would call an Orc success story. He buckled down and gave it his all, killing lots and lots of humans. Eventually he rose through the ranks of the army to not only hold a command position among his fellow Orcs, but he also became a trusted colleague of the evil Gorgo Aetherblade. See, kids? If you truly apply yourself and there are no limits!

Urzokk comes fully armored, and boy do I love this armor. It’s grimy and functional, and just the sort of thing I imagine that an Orc General would wear. This is also another brilliant reuse of a lot of parts we saw before in a brand new combination that makes it work as an entirely fresh figure. The torso, upper arms, and upper legs are pulled from the line’s standard knightly armored figures. These pieces are mated with the cruder, bulkier, and more angular Orc armor for the lower arms and legs. The paint here is absolutely phenomenal. The same armor pieces that looked so majestic and noble on the Hero Knights now looks old, worn, and caked in mud. This magnificent new body is capped off with the leather scale style groin piece.

Of course, if you want to bulk Urzokk up, he comes with a pair of the heavy and angular Orc shoulders, which peg into the back of the figure. There is also one piece on this guy that we haven’t seen before and that’s the rather sinister looking neck guard. Both the shoulders and neck guard feature some wonderful nicks and wear in the sculpt and that same amazingly weathered paint job really drives the worn and used look of the armor beautifully.

The standard head is a fantastic sculpt. I’ve been a little underwhelmed with some of the human faces in this line, but the Orcs have been superb. This portrait is just packed with grim personality from the tusks protruding out of his bottom jaw to the pointed ears and the veins sculpted in on the sides of his head. The piercing yellow eyes are creepy and I love the deep shade of green they use for the Orc skin. Urzokk also features some white war paint to set him apart from the rank and file soldiers. If that’s not enough, the figure also includes a spare head without the war paint, which is a great bonus if you want to swap it with any of the other Orcs to make a new style of foot soldier, or just stick it on the end of one of the hero’s spears.

While the extra head is a nice surprise, the other accessories are all things we’ve seen before. The sword is the longer two-handed version with the stylish crossguard and slight swell toward the end of the blade. I love this sculpt, but I do wish they had weathered Urzokk’s a bit. It looks a little too clean for this guy, especially in contrast with his armor. I really liked the patina of rust they put on Urkku’s sword and something like that would have been welcome here. Of course, you also get the standard brown belt so that the figure can wear the sword on his waist or across his back.

Urzokk comes with the same style of shield we’ve been seeing all along. There’s a wrist clip that pegs into the back and it holds quite well. This shield has a unique painted crest, in this case a black skull emblem against a crimson field. While the sword was clean, this shield has some nice distressed paint effects to make it look battle worn. 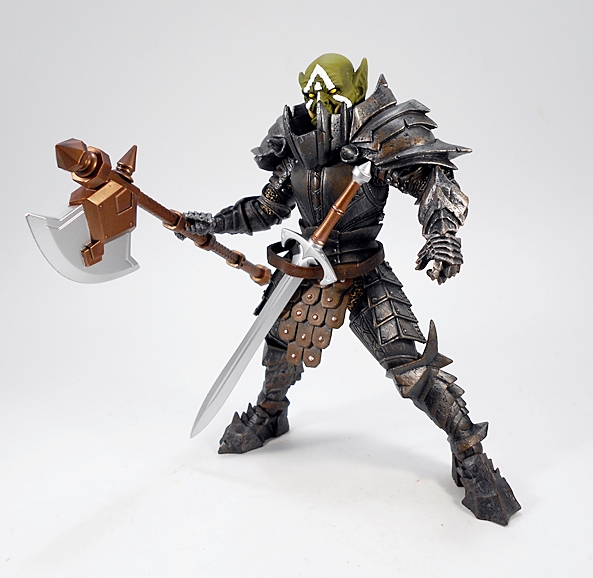 Finally, it’s our old favorite, the axe, this time with a bronze painted shaft and the usual ability to change it from a single to double bladed weapon. Like the sword, I think the axe is a little too clean for this figure, but it’s still a great piece. 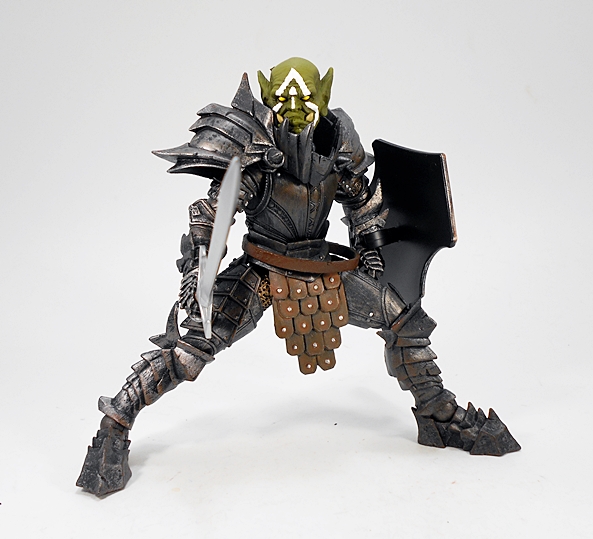 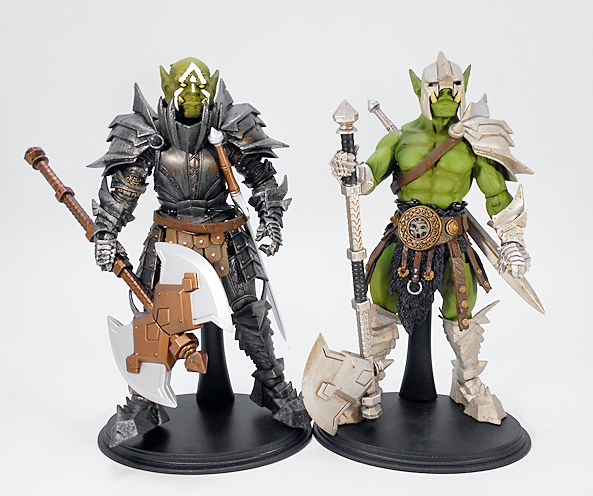 Urzokk was one of those figures that didn’t make my original cut, when budgeting the add on’s for my Kickstarter Backer Rewards. Luckily they later extended the pre-order period and I was able to find some money and add him and a few other figures. He is no doubt a fantastic looking figure and while I’m sure I say this almost every time, this one is very high up on my list of favorites. The new combination of armor pieces works wonderfully and the weathered paint effects are flawlessly executed. And that leaves just three more figures to check out before I’m all caught up. I’ve got a Dwarf, a Knight, and one more Orc left and I think I’ll take them in that order. T4H are expecting new figures to be shipping out in about a month, so I may even have some more to look at by the time I wrap this up.