Last week saw the Blu-Ray release of Captain America: Civil War, a film that I thoroughly enjoyed in the theater and have now enjoyed even more in the comfort of my own home. Over and over again! Coincidentally, I’m also doubling back to start my look at the Civil War inspired wave of Marvel Legends. Considering I’m so backlogged on these figures, I’m going to be doubling up on a few of these so that I can get through the wave a little quicker than usual. It seemed only natural to kick it off with Cap and Iron Man.

And here they are in the packaging. Not much new and noteworthy to talk about, other than the movie branding and some nice blue panels on the sides with character art. If I’m being honest, I bought this pair solely for the BAF parts and I doubt I’m alone in that. Let’s look at Cap first to find out part of the reason why… 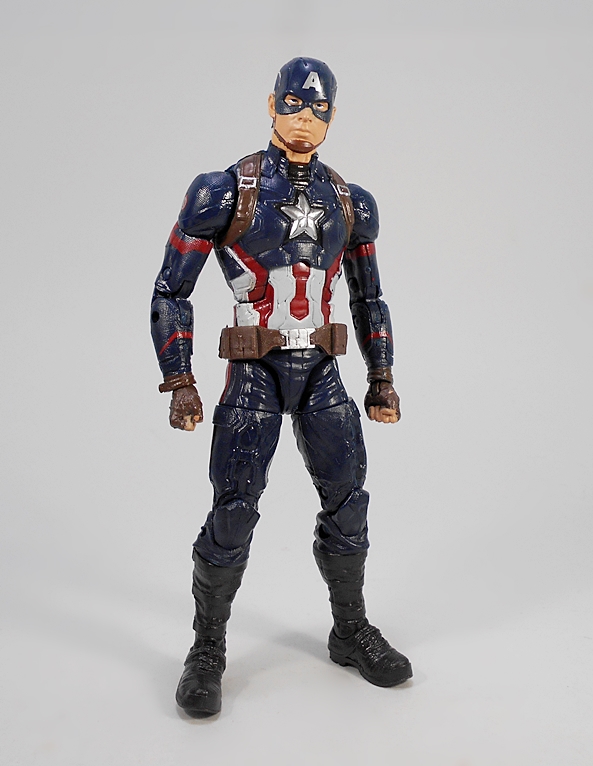 Yes, this is Age of Ultron Cap from last year’s Thanos Wave with a fresh coat of paint, and the new deco doesn’t really thrill me. The blue is a lot darker and the white bands from the biceps have been replaced with more dark blue and a less notable red stripe. Most of the other minor differences are just areas where red accents have been either added or taken away.

Speaking of other things that have been taken away, last year’s release included two extra hands and an unmasked head. Here? Nope, nada, bupkis! The only accessory Cap comes with is his shield.

It’s the same shield we saw last time, which means it’s got the more realistic straps and detailed sculpt inside. Unfortunately, there’s no way to attach it to his back, unless you use a big wad of blue tack. The bottom line is that unless you’re after a darker, grittier look for Cap, or you want yet another of Cap’s shields rattling around in your accessory tote, the Giant Man head is the only reason to even consider this purchase. Not a bad figure, by any means, but it would have been an easy pass for me. Congratulations Build-A-Figure gimmick. You won this round!

Iron Man’s Mark 46 armor fares a bit better, as I believe this is a brand new sculpt, but I have so many god damn Iron Man figures in my Legends collection, my eyes start to glaze over when I try to remember them all. It’s at least notably different from the Age of Ultron Mark 43, which was mostly a repaint of the Iron Man 3 Mark 42. Oh, god. I need to lie down. F.R.I.D.A.Y. get me an ice pack. 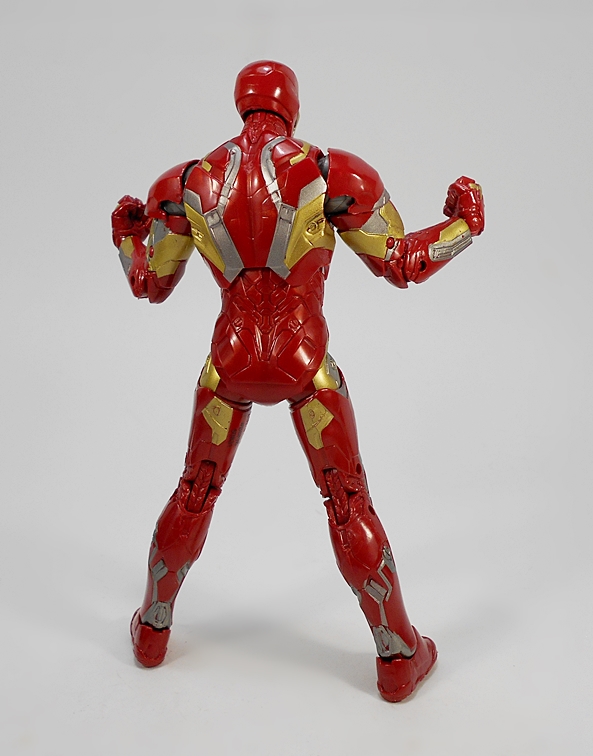 I actually dig the look of this design a lot. The overall figure is a lot cleaner than the last two with a little less panel line clutter and the gold is toned down even more than the Mk 43. The more buff look of the chest is pretty cool and the partially shrouded Arc Reactor at least shakes things up a bit. The paint here is also pretty sharp and clean and the red plastic is shiny and vibrant. Alas, the Mk 46 takes a hit when it comes to articulation. All the points are there, but the shoulders inhibit the range of motion in the arms and the hips don’t have a lot of motion either. He’s a solid figure, but there are only so many poses you can get out of him and that’s frustrating.

Cap may have been cheated out of accessories, but Tony wasn’t. The Mk 46 not only comes with an extra pair of hands (one pair of fists and one pair of repulsor blasting hands), but also a couple of effect parts designed to peg into his palm repulsors. Yeah, they’re blue and that’s odd, but they’re still pretty cool and that’s coming from someone who isn’t generally impressed by effect parts. But even here, there are issues with the articulation. The wrists are limited by the arm sculpt, so getting his hand straight up into the firing position while the arm is held straight out is impossible. You’ve got to bend those elbows!

You can also put them in the peg holes in his feet. It doesn’t quite position the blasts where they’re supposed to go, but it still works just fine. 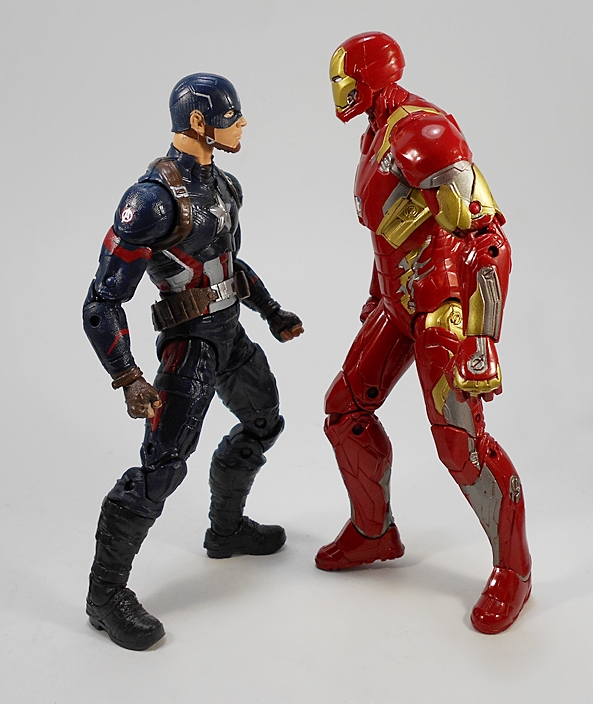 One last thing worth mentioning is the scale here and how it feels off between them. Obviously kids are going to want these figures so they can make them fight each other. And by kids, I my 43-year old ass. But put them toe to toe with each other and Cap doesn’t just come up short, he looks downright puny. I get it, Tony is a guy wearing a suit of armor, so he should be bigger than you average guy. But this is Steve Rogers and he’s not your average guy. Then again, scale always has been an issue with this line and this Cap is definitely rather demure. 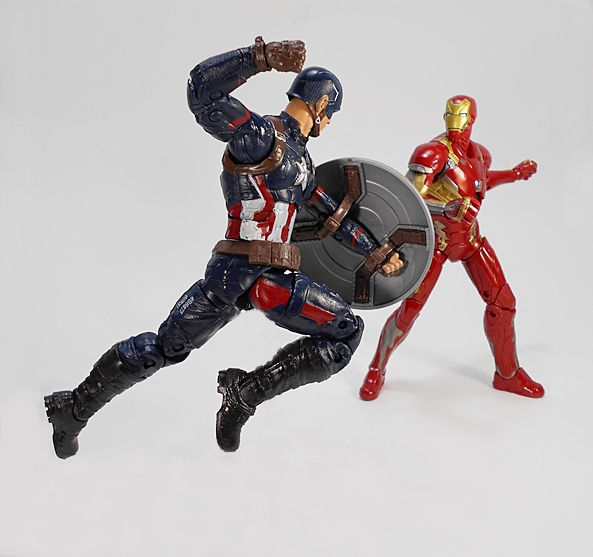 It seems like a while since I came away from a Marvel Legends review and not been on a toy-loving high, but today’s installment of Marvel Monday turned out a little disappointing. Neither of these releases are bad figures, but neither excite me all that much either. Tony Stark obviously comes away as the fresh and new release, but even there I’m starting to feel the effects of iron fatigue. But hey… two BAF parts down!