My, how time flies. I’ve only got two more Mythic Legion Wednesdays before the long and impatient wait for more figures to arrive. That may be as soon as next month, but for now, I’m checking out the last of my heroic knights in this line, Sir Ignatius. I know I proclaim a new favorite just about every week, but this one truly is my favorite knight in the line. After looking at sixteen of these figures, I’m going to forgo a look at the packaging and jump right to the figure. Not only because there’s nothing more to be said about it, but also because I was a little short-sighted and already put the packages for these figures into storage. 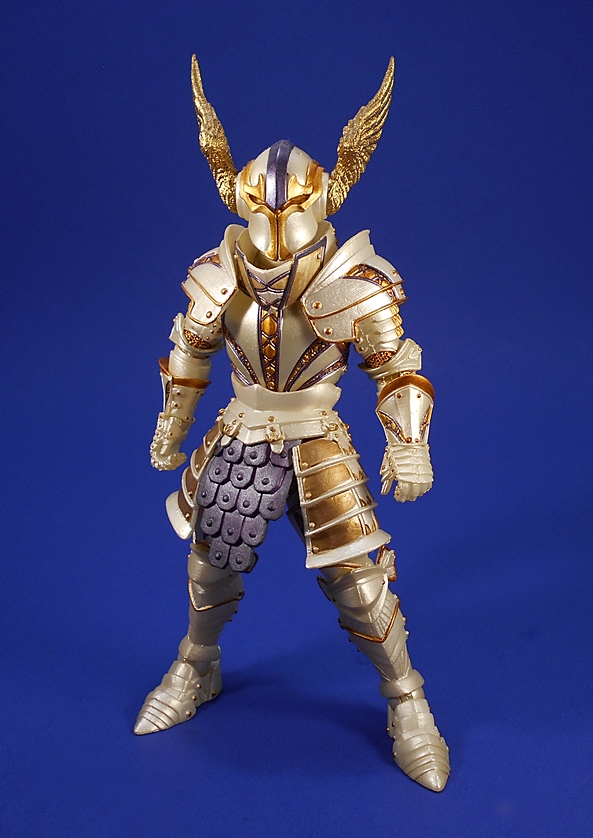 Behold, Sir Ignatius, for he is 100% pure sex poured into a suit of armor! Yes, from the neck down, the parts are almost completely recycled from Sir Gideon and Sir Owain. The only difference here is that Ignatius has the segmented scale-style armor piece protecting his crotch, whereas Godfrey had the sash and Owain had the more ornamental plate. What makes Ignatius so striking, however, is that amazing new deco. The base plastic is a gorgeous pearlescent shade that really makes him stand out on the shelf. It’s coupled with some sumptuous gold leaf paint and just a little bit of metallic purple, which sounds crazy but works! As always, all the tiny fixtures and rivets are painted as is the chain mail exposed in the joints.  The only part of the deco that dims Ignatius’ Deco of Righteous Glory is the scale piece over his crotch, which is more of that purple. 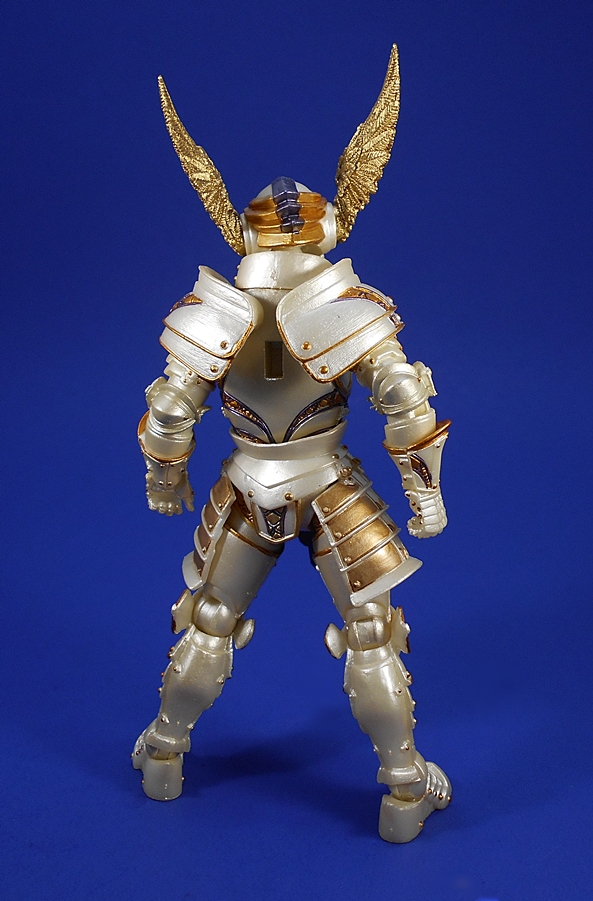 As always, the shoulders come detached from the figure and peg into the sockets in his back. These are repaints of the shoulders that came with Sir Gideon. He looks fine without them, but all the better with them installed. I can’t help but think Ignatius could have used a cape. The body here features the standard Mythic Legions articulation, which basically means a whole lot of rotating hinges. The modular design also means that you can take the figure apart at pretty much any joint and swap in parts from other ML figures if you want. 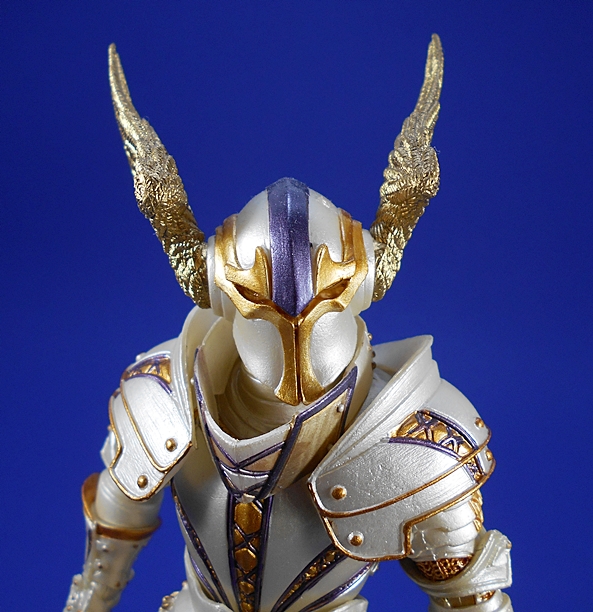 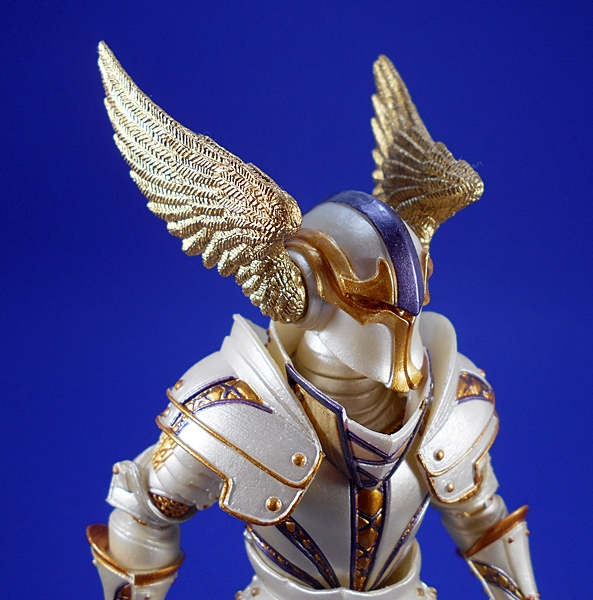 As blindingly awesome as the body on this figure is, I still think it’s the head that impresses me the most. The helmet is none other than the one from the sinister Gorgo Aetherblade, also used on The Blood Armor, and the new coloring here makes for a total transformation of the piece. What was once a visage of true evil now looks like a Holy Ass-kicker. I love the contours on this helmet as well as the raised pieces around the eyes. He looks like a medieval Boba Fett. Gorgo’s antlers have been replaced with Sir Gideon’s wings and here they have been repainted to pure gold and add to Ignatius’ majestic countenance. Simply stunning! 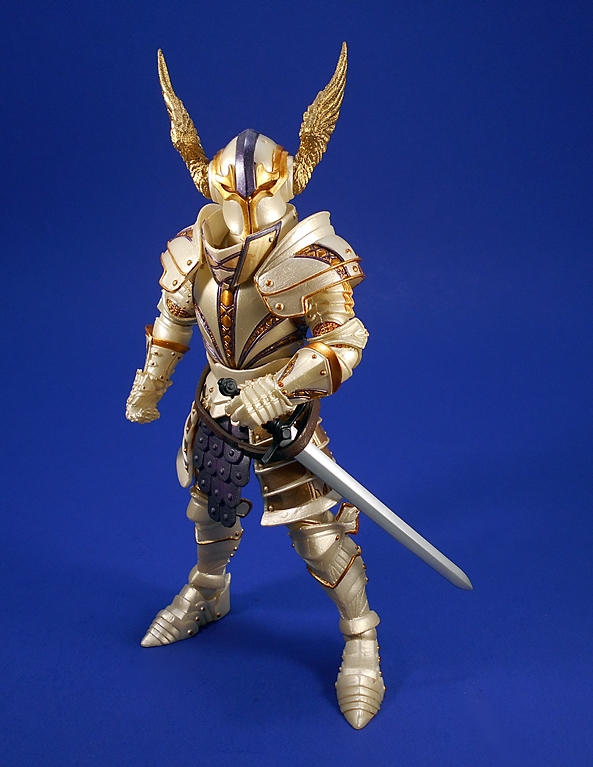 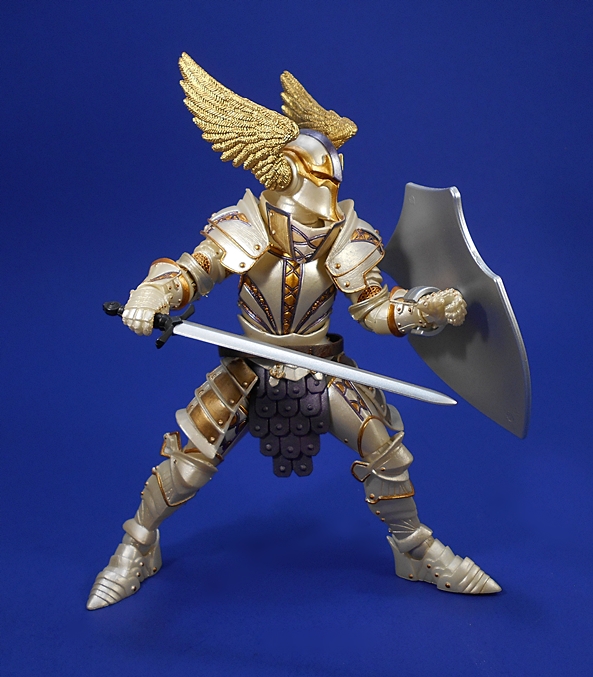 When it comes to Ignatius’ arsenal, there isn’t a weapon here we haven’t seen before, but by now that’s to be expected. He comes with the usual brown belt that can be worn around his waist or as a shoulder strap. The sword is the smaller, and less frequently seen, single-handed blade. This time it’s been painted with a black hilt and a silver blade. 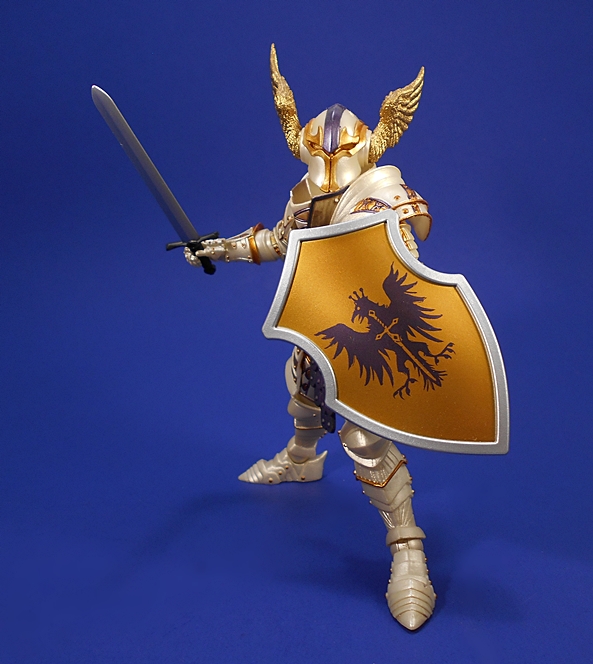 The shield is the same piece we’ve been seeing all along, this time painted with a gold surface The coat of arms is a griffon, wearing a crown, and with a cruciform sword in the center of it. It’s basically a palate swap with Sir Owain’s coat of arms. The shield pegs into a clip, which attaches to the figure’s wrist. 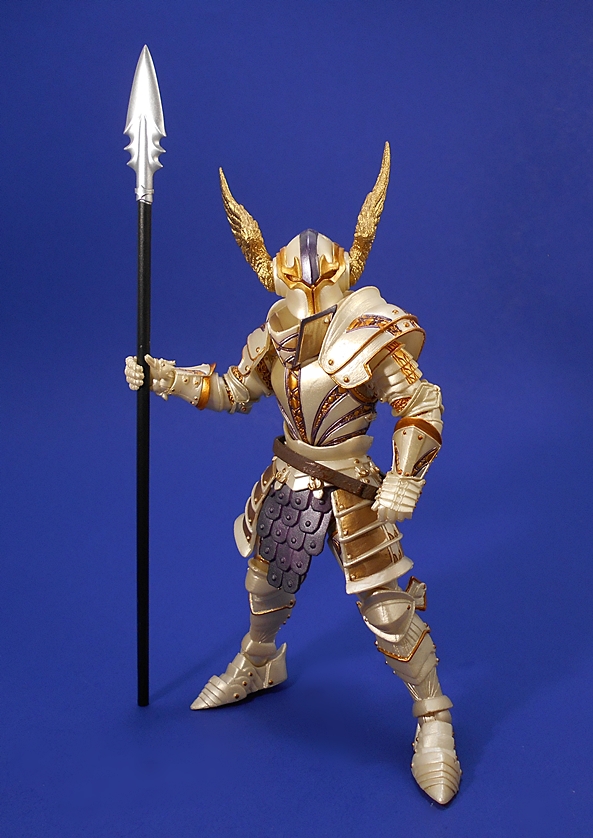 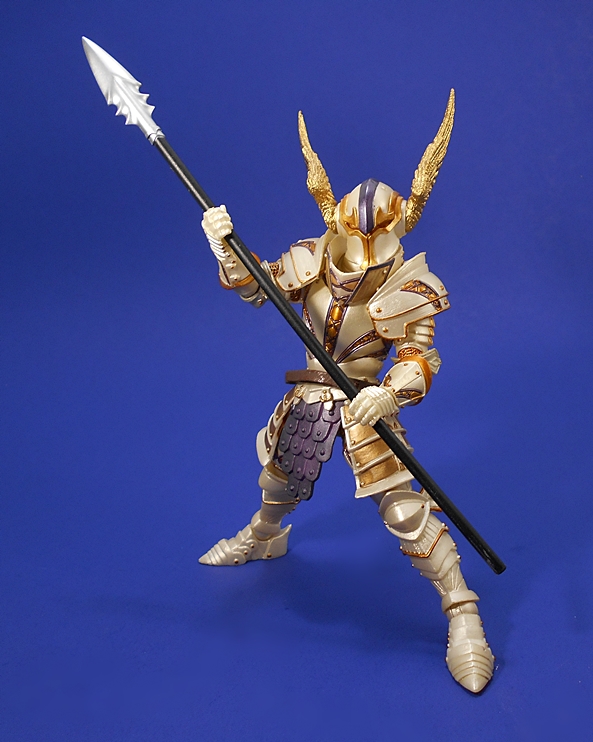 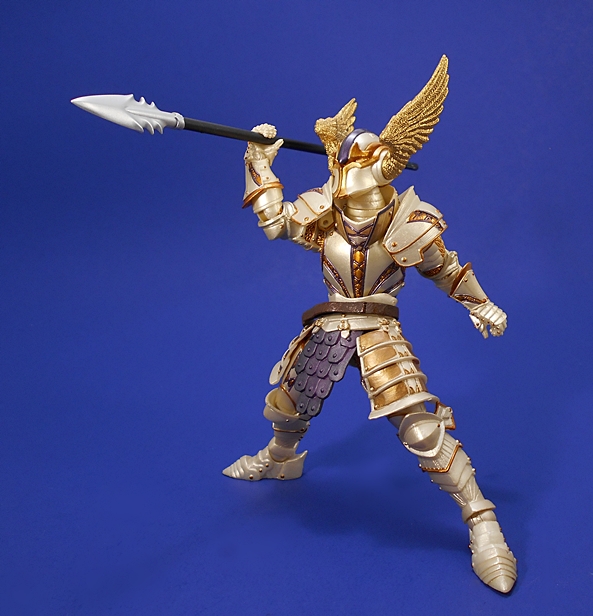 And finally, we have the often seen spear, but what’s this? It’s actually painted? Yeah, if you’ve been with me throughout all the Mythic Legions reviews, than you may remember my main complaint about this piece is that it’s always been left all silver. Here we have the shaft painted black and I think it looks great. 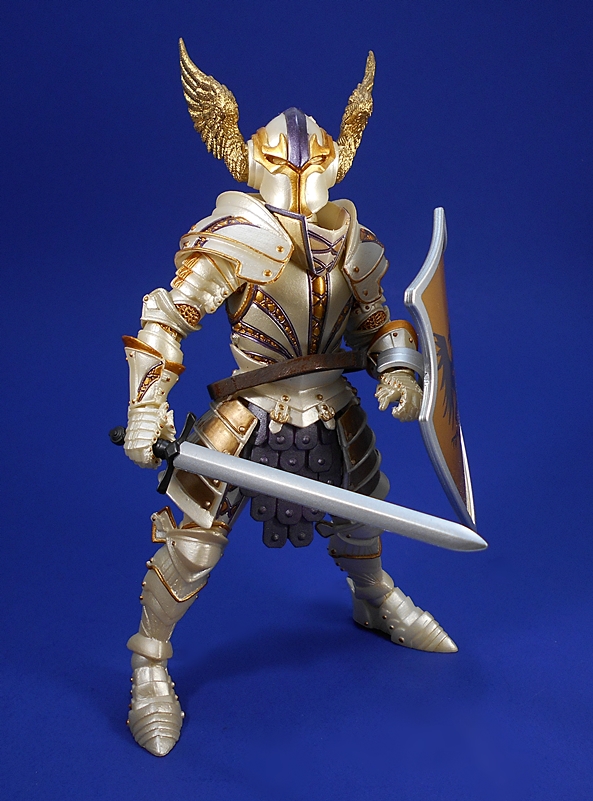 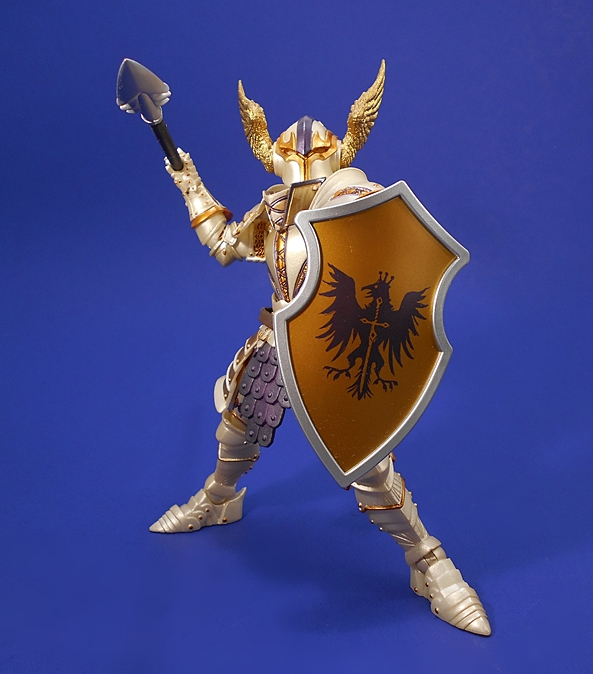 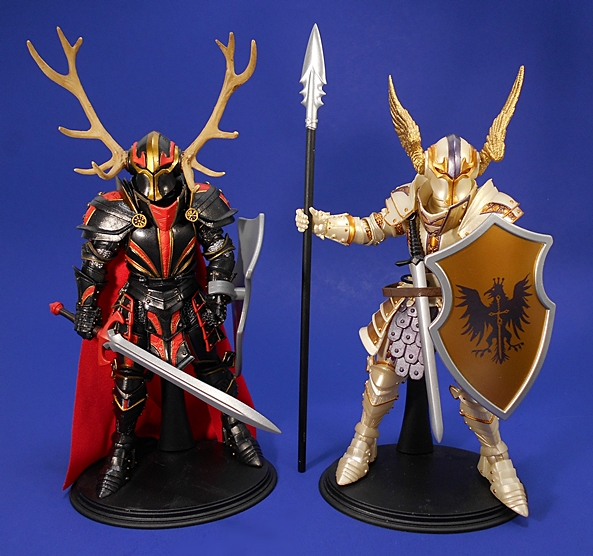 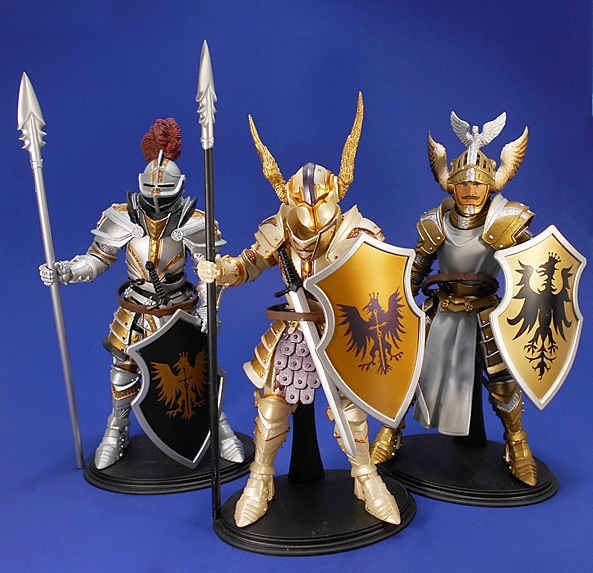 Sir Ignatius is without a doubt my favorite knight in this line. And now that I’ve looked at all the ones that I own, I can say that with a bit of finality to it. The amazing armor sculpt that we’ve been seeing since the beginning is elevated ever higher by some truly great looking plastic and an amazing color scheme. I realize that Sir Gideon is meant to be the main hero of the line, but it’s Ignatius that looks like a true paragon of virtue. With these two standing alongside Sir Owain, T4H have delivered three of the finest armored knight figures the toy world has ever seen. And if that sounds like hyperbole, then you really need to get these in hand and have a play with them, because these figures are quite simply Top Shelf. And with that having been said, I have just one more lone Orc to look at next Wednesday!