The Titans Return Deluxe Class love-fest continues today with Wolfwire and Monxo. Seriously, Hasbro? Those are the names your going with? I’m hard pressed to say which is worse. I thought now that we’re finally back to Hasbro making these characters instead of third parties, we could cool it with the wacked out names, but nope. Somewhere along the way Hasbro misplaced some trademarks and instead of Weirdwolf and Monzo, we get Wolfwire and Monxo. Does it really matter? Nah, because as we’re about to see, these are some great toys and in the end I can call them whatever I want. 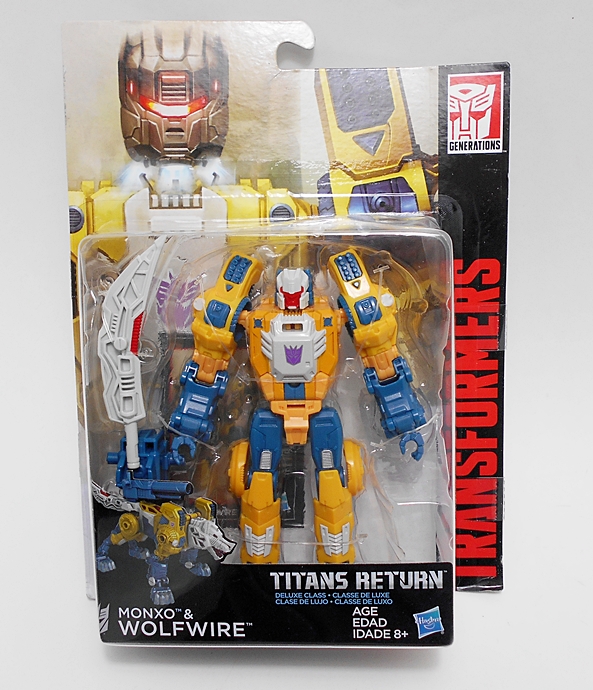 Cue the gratuitous packaged shot! Wolfwire comes packaged in his robot mode with Monxo attached as his noggin, but I’m going straight for the alt mode first! 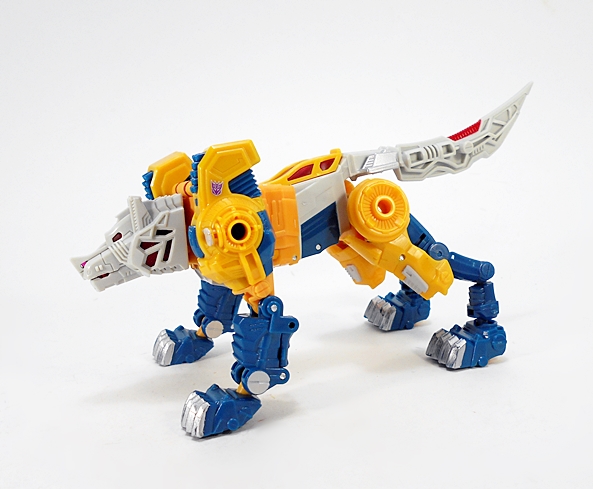 “Just one thing. You can only have the heads of the animals!” Cyclonus’ words from Rebirth give us a clue as to why we’re seeing so many animal based Decepticons in this line. Because, yes, Wolfwire’s alt mode is a cybernetic wolf and it is an absolutely beautiful homage to the original G1 toy. You’d have to look to Fansproject’s Quadruple-U (and pay a whole lot more) for a better treatment of this alt mode. And that’s not intended as a left-handed compliment, because Hasbro did a beautiful job with this guy. He is absolutely striking and so much fun. 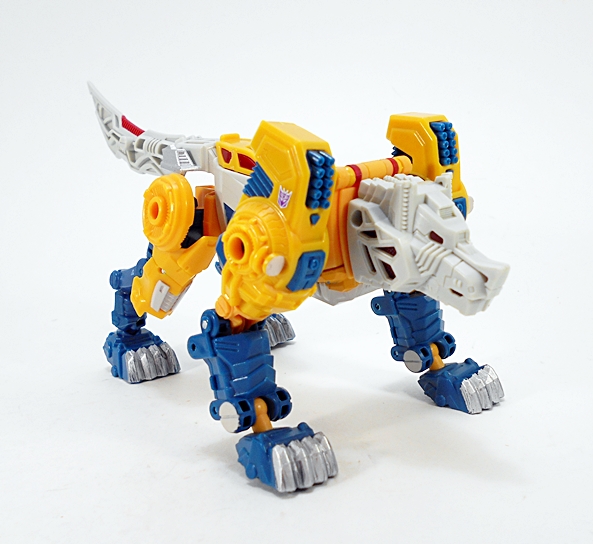 The sculpt here is exactly what I was looking for. He’s got that delightful mix of curves and hard angles, the key ingredients that make up any great cybernetic animal. I just adore the sculpted rocket packs on the tops of his front legs. The deco is very faithful to the original, with some beautiful yellow and blue plastics, some pale gray, and a little silver and red paint to make things pop. 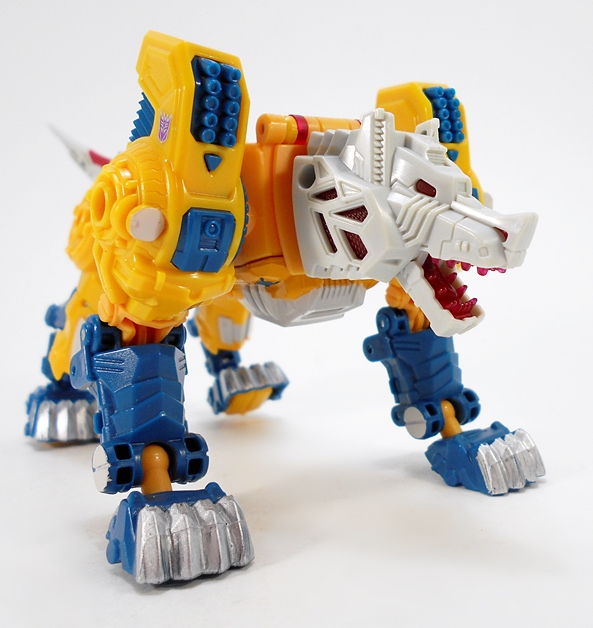 Hasbro really nailed it with the wolf head, from the serrated edges on the ears to the recessed textured red panels on the sides. It even has a hinged jaw that reveals translucent red teeth. Brilliant! Did I mention the tiny Decepticon emblems on his upper legs? Beautiful! 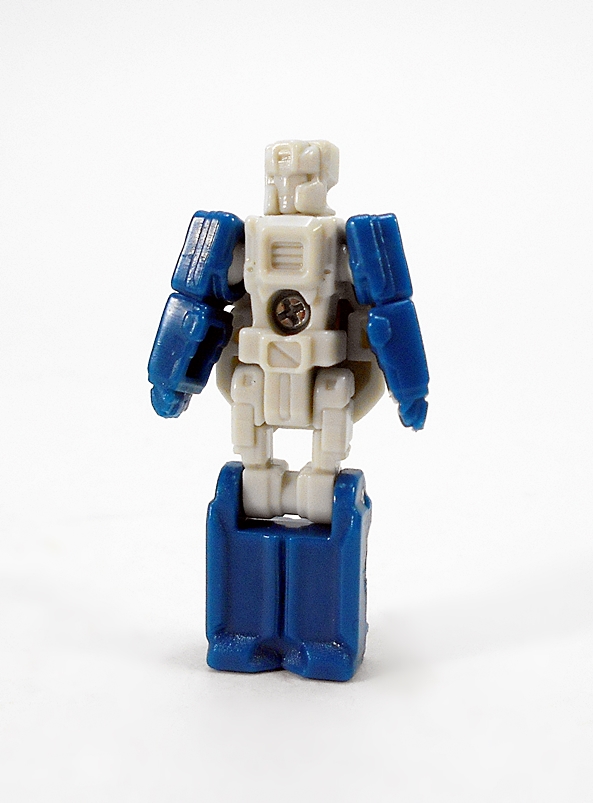 Monxo is your standard little head-robo. He’s blue and gray and as we’ve seen so far in this wave, Hasbro has nixed the paint apps from these tiny guys, which continues to bum me out. You still get points of articulation in the knees, hips, shoulders, and head, all of which are related to the transformation. 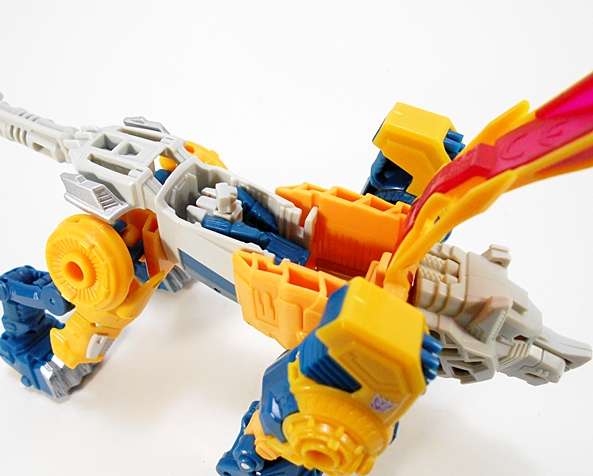 Despite being a wolf, Wolfwire still has a cockpit area for Monxo to sit and it’s quite roomy. The whole top of his back panel hinges upward and there’s some red tinted plastic to make up the canopy and a little sculpted seat. 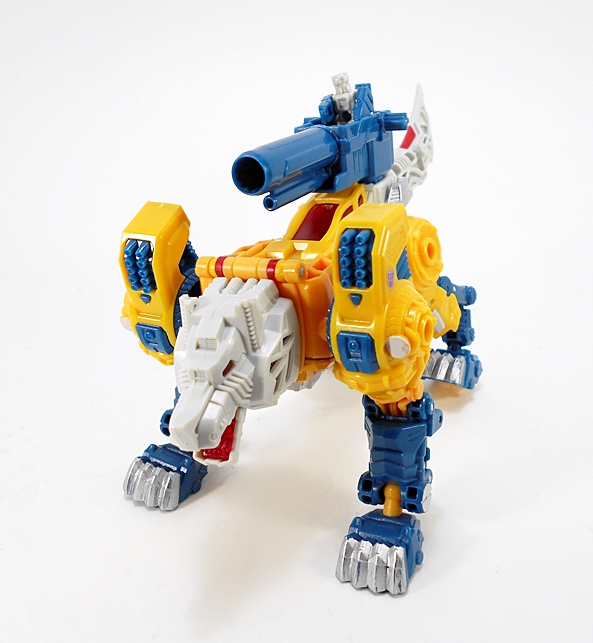 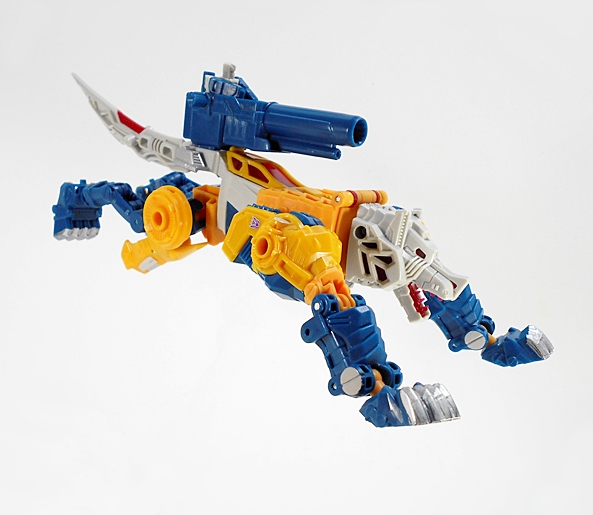 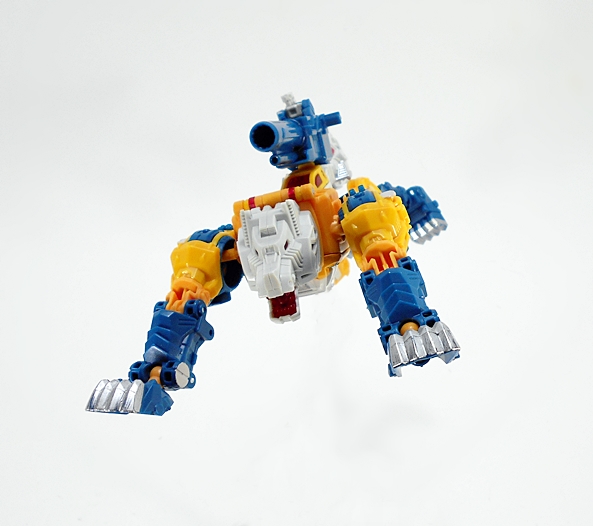 You can also tab Wolfwire’s chunky gun onto his back to make a gunning station for Monxo or another little head guy. 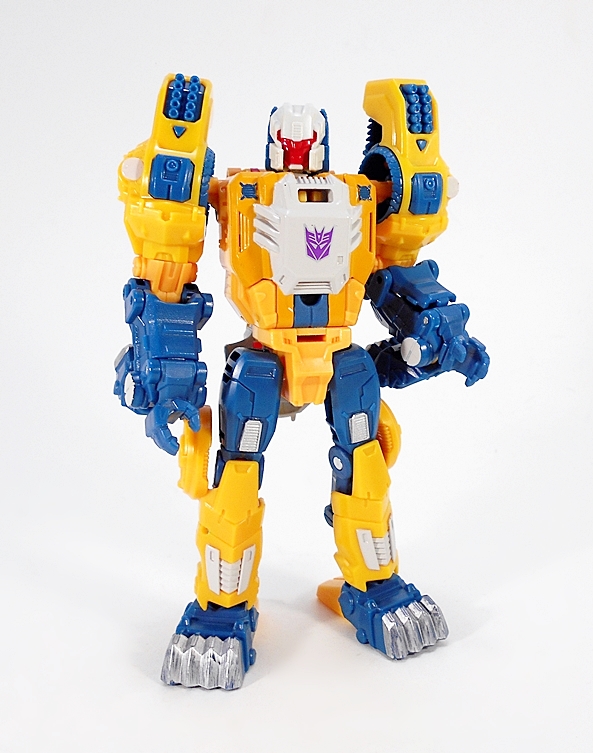 Transforming Wolfwire into his robot mode features a couple cool moves to shrink the torso, drop the upper hind legs down to his lower robot legs, and, as expected, the tail pulls out to become his sword. The end result is a robot mode that is every bit as good as his wolf mode, and that’s certainly saying something! He’s a little bit stocky in the torso, but the proportions are still very good. You get some useful heel spurs that fold out of his animal feet to steady him, and those glorious rocket packs wind up on his shoulders. Like the other Titans Return Deluxes, he has a faked out chest panel, which covered the tech specs on the original G1 figures. The deco retains the same beautiful color palate as his wolf mode. 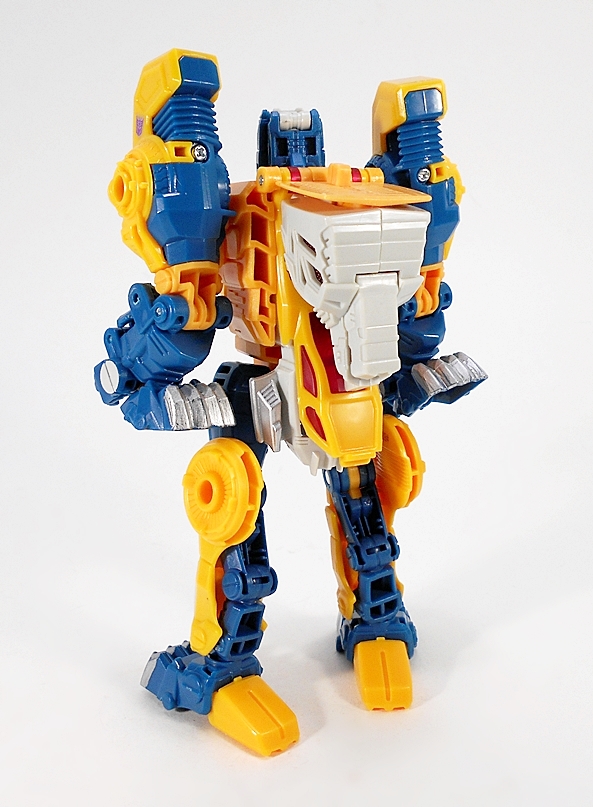 He definitely sports some wolf kibble on his back. The upside down wolf head forms his backpack and his cockpit hangs off like a tail bone. Here you can also see his back wolf feet hanging off his forearms. Still, it’s nothing too bad. 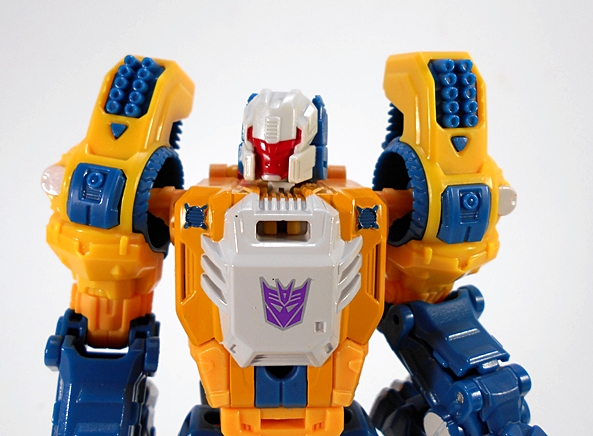 Monxo makes for a decent head, although I think the face sculpt could have been a little sharper. The red paint is beautiful, but it’s hard to make out the details in the face. 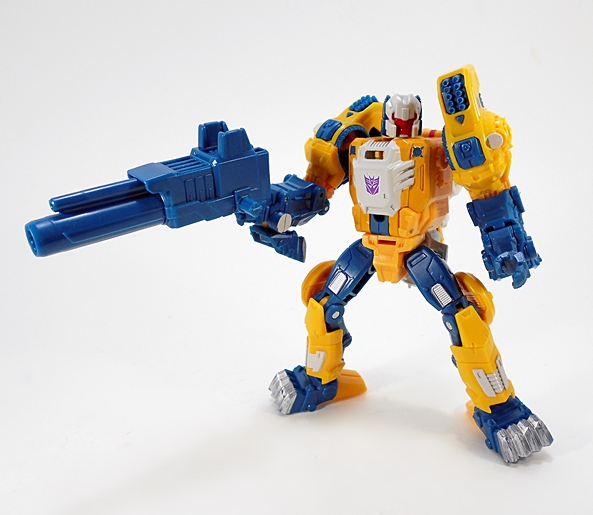 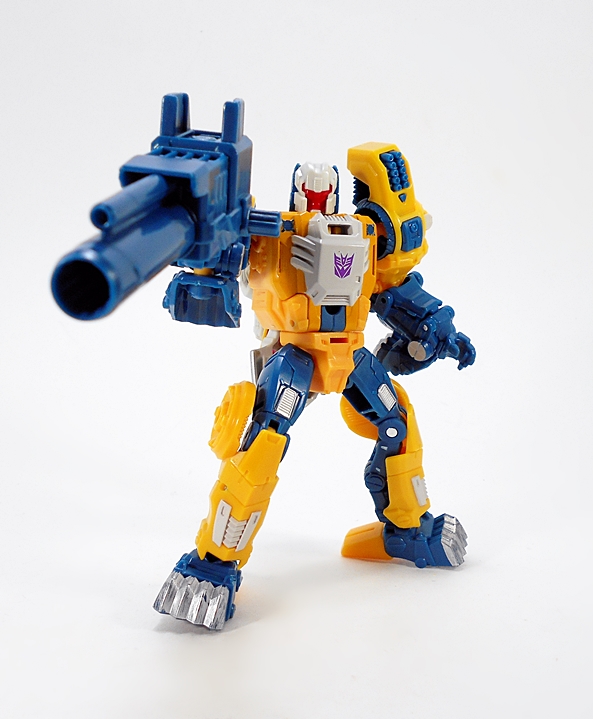 We’ve already seen Wolfwire’s big gun. I do feel it’s a tad over-sized for his robot mode, but no quite so much that it looks ludicrous in his hands. 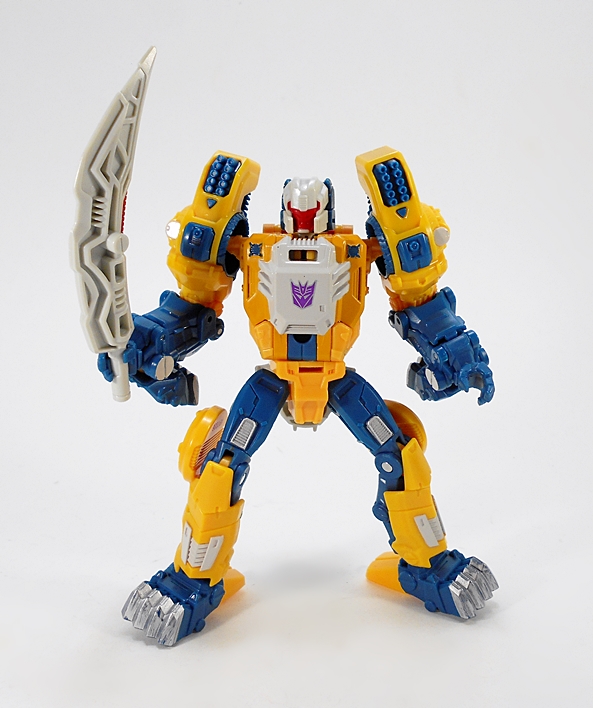 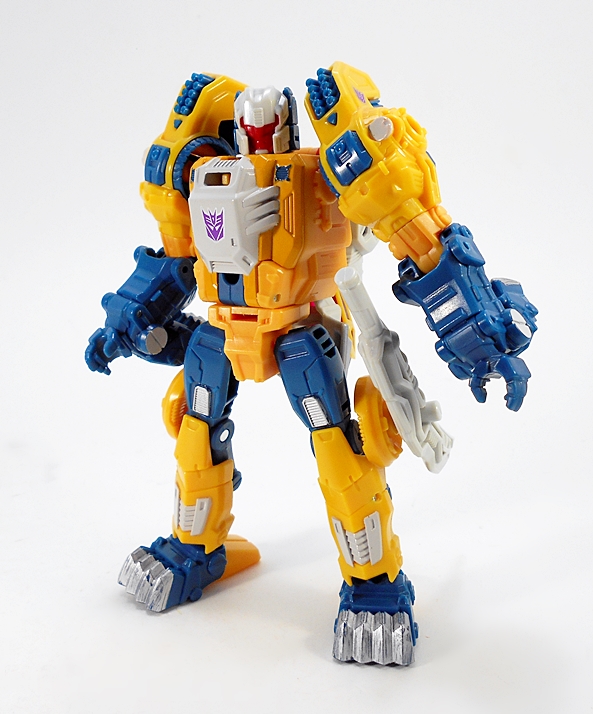 And finally, you get the tail sword, a nice sculpt with some red paint apps. He can also wear it on his hip. 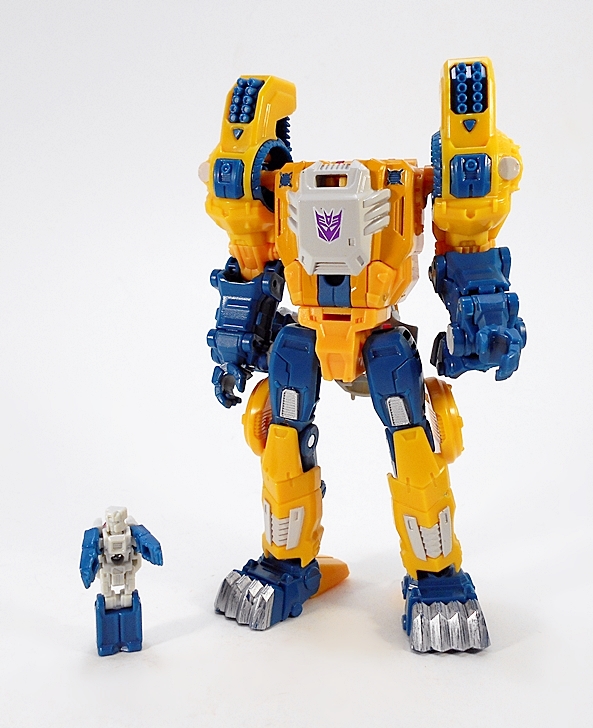 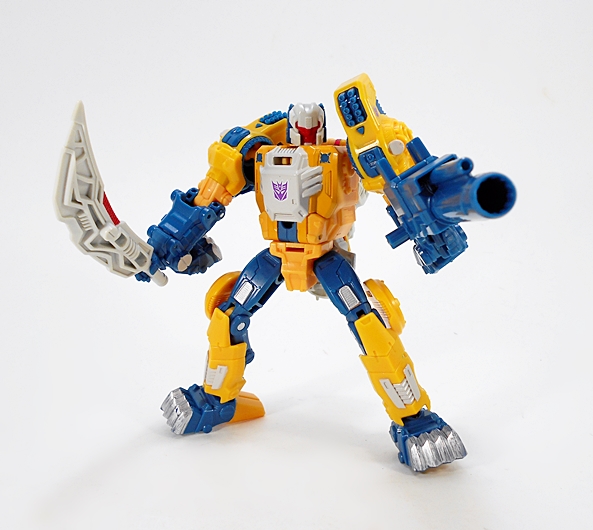 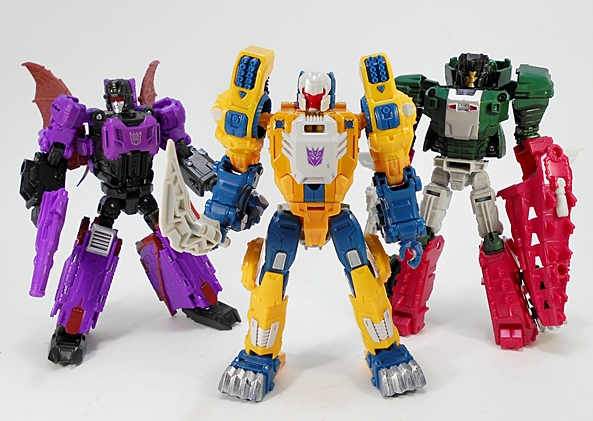 I don’t like to throw around the word perfect a lot, because few figures really are, but Wolfwire comes pretty damn close. I literally love everything about this figure except his new name. The coloring, the sculpt, the transformation, and the overall fun factor makes this a splendid update to one of my favorite G1 Headmasters and another addition to my collection of great Deluxe Class figures from this Titans Return line. I never want this line to end! Next week, I’ll wrap up this wave with a look at Highbrow.