Ugh, I’ve got too many good things ending this week. Yesterday was my last Mythic Legions feature for a while and today I’m wrapping up the second wave of Titans Return Deluxe figures. My last figure for this round is Highbrow and his little head buddy Gort… er, I mean Xort. Damn you, Hasbro, protect your trademarks! 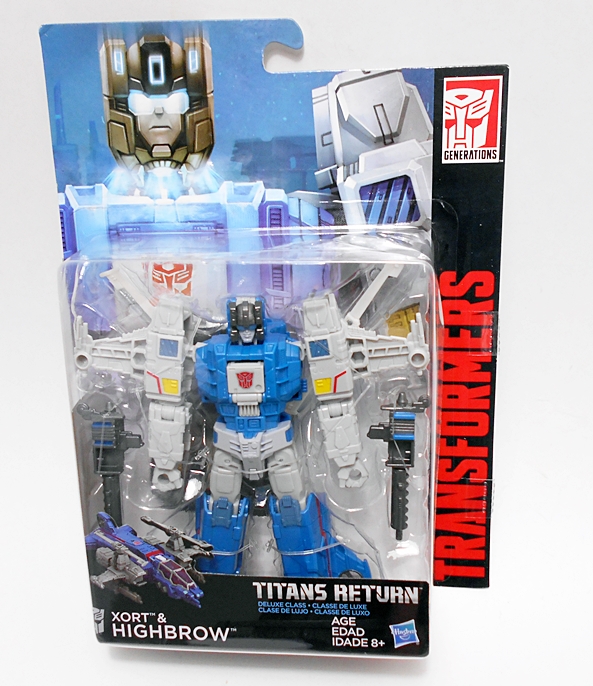 Here’s the gratuitous packaged shot and I have nothing new to add. I don’t particularly love these card designs, but the bubble does show off the figure quite nicely, and to be honest, these figures tend to speak for themselves. They could be hanging on the pegs in used Ziploc bags with sandwich crumbs in them and I’d still be happy to buy them. Highbrow is packaged in his robot form, but as you probably already guessed, I’m starting with the alt mode. But first, I have to deal with all these goddamn plastic tethers.

True to his G1 namesake, Highbrow is a dual rotor attack chopper. I’ve never been a big fan of this design, mainly because the original toy didn’t look like it could get off the ground, and the aerodynamic feasibility of this one also leaves me in doubt. Now, that having been said, it’s a toy, so I’m willing to suspend a little belief and enjoy it for what it is, and truth be told there’s a lot to dig about this chopper.

The three blades on the original toy have been reduced to just two and the whole aircraft has been made a lot more sleeker. The biggest improvements are in the cockpit and nose section, which have been streamlined for a sexier look. The tinted red canopy has a painted and sculpted framework that looks absolutely fantastic and the nose features a single chin gun. I’m a little bummed out that the wings no longer end in downward angles, like the G1 toy did. I think that would have made it look a little more aggressive, but then it also would have impacted the robot mode, so I’m OK with the change.

The colors on this chopper are both beautiful and evocative of the original toy. You get a lot of snappy blue plastic and a good deal of pale gray. Additional paint apps include some red stripes, some charcoal colored intakes on the sides below the cockpit, and more charcoal paint on the rear stabilizer fan rotor. There’s also a lovely Autobot emblem stamped on the back. This toy is proof positive that you don’t need a lot of those ‘spensive paint operations to make the coloring look good.

Xort is your typical little head robot. I think I’ve introduced them all that way, but truth be told there isn’t a lot new to say about these guys. They all have that same basic articulation, with the legs fused together and points at the knees, hips, shoulders and neck. While Hasbro has nixed the paint apps for all the other Nebulons (are we still calling them that?) in this wave, Xort here held on to his, so you get a little teeny bit of silver paint on his visor. I know it doesn’t sound like much, but it makes all the difference to me.

Highbrow’s canopy is hinged at the front and opens to reveal a cockpit for Xort to sit in. It’s not terribly roomy, but he does fit in there with enough clearance to close the canopy without any issues. There’s also a hinged landing gear under the cockpit, but it’s not really necessary if you have the wing guns attached.

Wing guns, you say? Yes, you also get a pair of guns that mount under the wings. 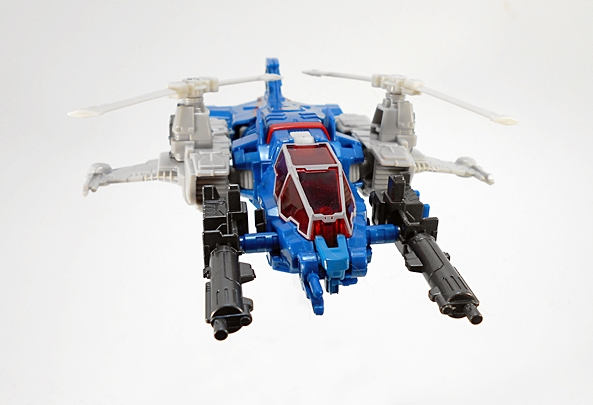 These can also be mounted on each side of the cockpit, which looks kind of cool. God help me, I want to buy another so I can load him up for quad damage. Use all the gun ports!!!

The guns can also be combined to form an outrigger gun for one of the little fellas to operate, and wow does this look like a bad idea. Not only does Xort look really uncomfortable, it looks downright dangerous. But I do appreciate Hasbro’s desire to offer a lot of play value to these toys and if I were a kid, I’d probably be fine with this, no matter how goofy it looks. Let’s transform Highbrow and check out his bot mode!

Oh my, I think I’m in love! Transforming Highbrow is very simple and intuitive. You just fold his legs out from his tail section and his arms fold out from his side pontoons and wings. The cockpit section folds back to form a backpack, the chest panel pulls out a bit, and you slap on the noggin. It may be a simple conversion, but the results are absolutely fantastic. You get some nice sculpted panel lines and detail and the deco stays more or less the same here as in chopper mode, with just a few extra paint apps showing on the upper arms.

Granted, he’s not quite so attractive in the back, but there’s nothing too bad here. The cockpit backpack stays in place and isn’t at all cumbersome. It does make him back heavy, but the heel spurs do their job to keep him upright. The rotor blades on the back of his arms are left loose to spin, but they don’t pose much of an annoyance when playing with him. The only shame here is that the transformation doesn’t require a twist in the middle, because that leaves him with no waist swivel in robot mode. On the other hand, it does give me at least one thing negative to say about this figure, because I got nothing else to gripe about. 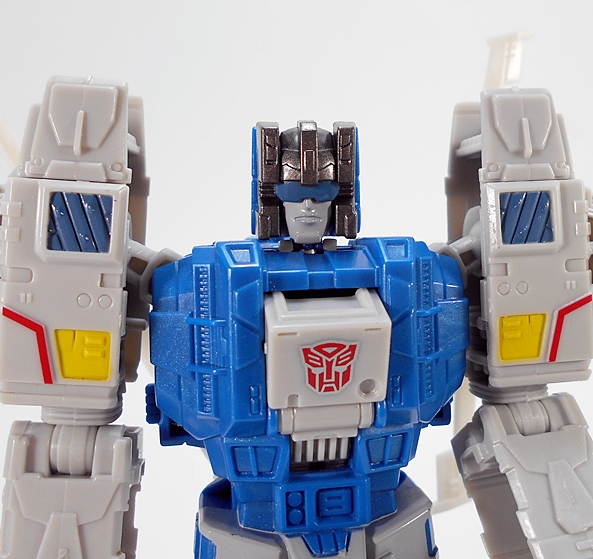 Xort makes for an excellent head with a clean and classic Autobot portrait. I really like the gray they used for the face and the visor looks great against the charcoal colored “helmet.” This shot shows off those lovely paint apps in the upper arms, and there’s a sharp Autobot emblem printed on the chest plate which housed the tech specs in the original G1 toy. Funny enough, I get something of a G1 Topspin vibe off of this guy, and that’s not a bad thing. Despite the gimmick, I really loved the aesthetics of the G1 Jumpstarters in robot mode. I felt that they were pretty close to the overall look of the Sunbow animated aesthetic. 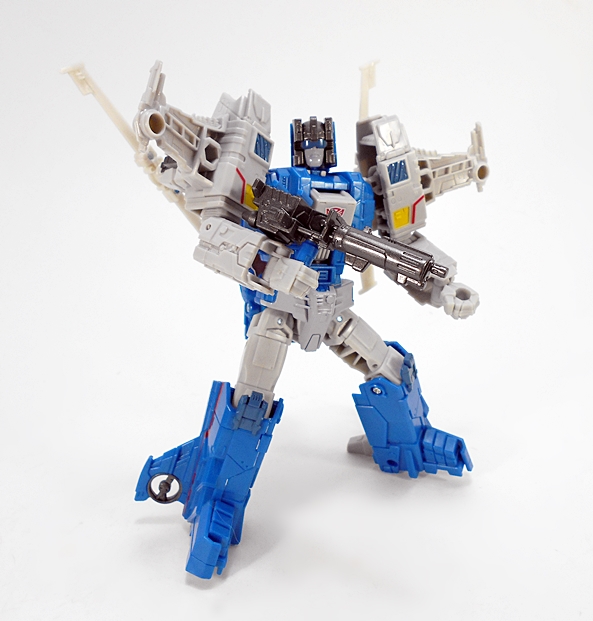 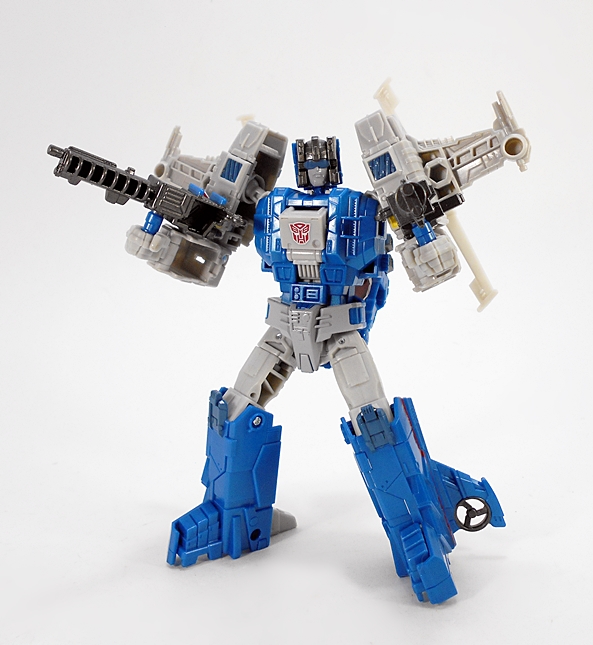 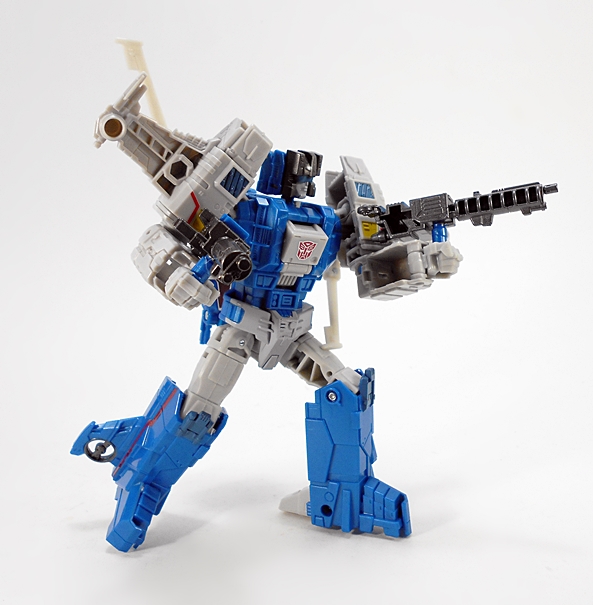 Of course, Highbrow’s chopper guns can be used as twin rifles when he’s in robot mode, and boy does he look like he’s ready to kick some can. 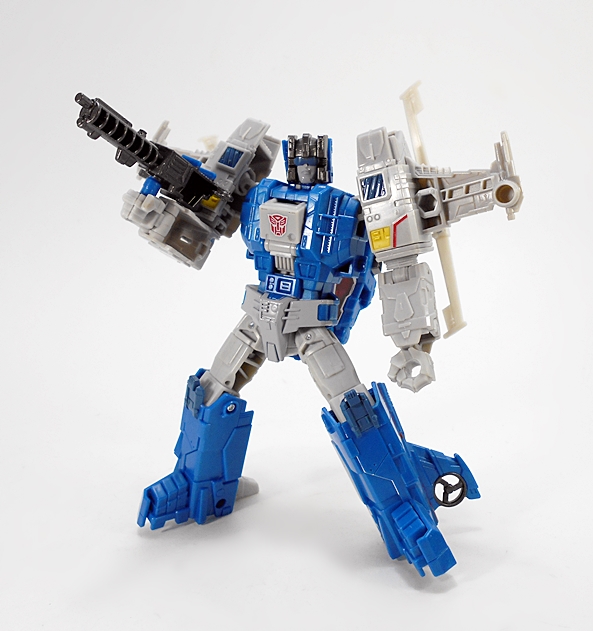 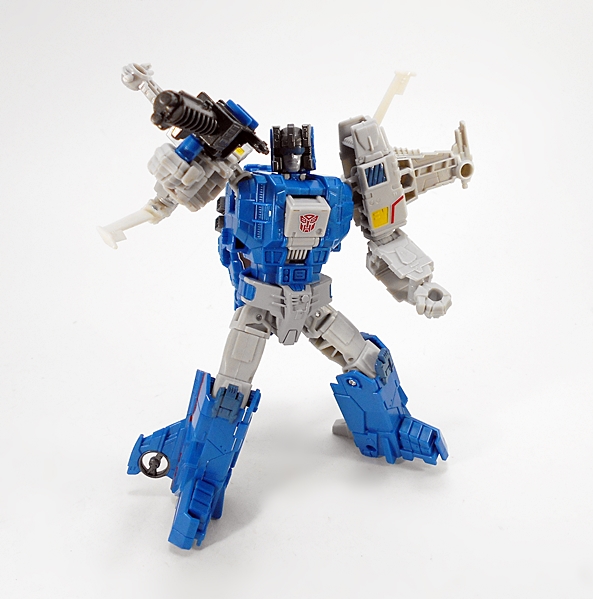 Highbrow is a triumph in simple and elegant Deluxe Transformer design and proves that when Hasbro is on its game, we don’t always need to look to high priced third party products to deliver the characters we want. He looks amazing in both modes, and he’s a fun toy to play around with. I’d argue he’s about as perfect an update to the G1 toy as you can get, while still keeping things simple and fun and at the Deluxe price point. Hell, I could apply that last statement to nearly all the Deluxe figures in Titans Return so far. I’d say even the weakest figure in this line (for me that would be Skullsmasher) is still a totally solid release and I can’t wait the next wave to start shipping. This is probably my favorite two waves of Deluxe Transformers to come out since I can remember.