It’s been a long while since that ultimately disappointing Deluxe Class Galvatron figure from Universe 2.0, but here we are finally getting a new treatment of the character. He’s a proper Voyager Class figure now and he’s part of the superb Titans Return line, so how could things possibly go wrong? Well, buckle up kids, because I’m about to tell you. But before I begin, a word from our sponsor: Jameson. When you’ve had a hard day at work and you come home to relax and enjoy that new Transformers purchase that turns out to be a giant plastic turd, Jameson is there. From that first sumptuous sip that coats your soul in warmth and comfort, to the last drop as you greedily coif down the glass to help you cope with crushing disappointment that only a middle aged collector of toy robots could possibly understand. Jameson. It’s there to be your friend, even when Hasbro isn’t. Now… on with the show…

Galvatron is my first Voyager Class figure in the Titans Return line and so this is my first look at the boxed packaging. It’s largely the same as the Combiner Wars deco only now with the character art showing off the headmaster gimmick and, as we’ll see, in this case it’s very misleading. The figure is packaged in his robot mode, but I’m going to start with his alt mode… oh, in this case, that should be alt modes… plural. Yup, he’s a Triple Changer. 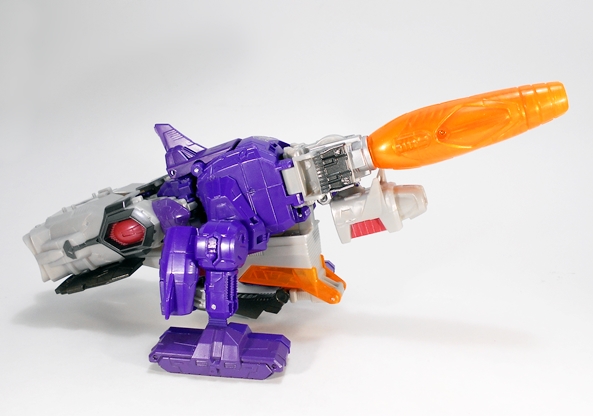 So the primary alt mode is this giant cannon and I like this thing a lot because it’s the first solid homage we got to the original G1 toy’s alt mode in… perhaps ever? That lovely orange gun barrel sits on a pair of tank treads ready to blast holes in any Autobots that come into range. God, I loved the firing sound effect they used for Galvy’s cannon in the cartoon! I’d say this would have been a great opportunity for a sound chip, but I don’t think they could have done that sound justice. The coloring on this toy is mostly comprised of some gorgeous purple and some of that hideous off-white-gray plastic. Blah. Still, that purple and translucent orange are almost enough to win me over… almost. 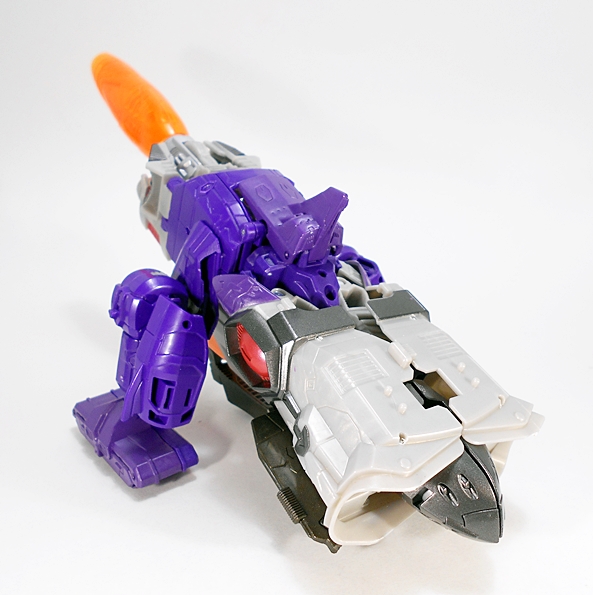 There isn’t a whole lot to say about this mode, other than mine doesn’t seem to fit together all that well. I’ve checked and double checked that everything is packed in properly, but the hatch on the top simply will not sit flush like it should, and the two halves of the back don’t lock together very securely. I’m tempted to blame this on designing the figure to be a Triple Changer, but I’m really not sure that’s the case. And that brings me to the jet mode.

This garbled mess would look like an afterthought it it weren’t for the fact that the entire nose and cockpit section is on the figure expressly for this second alt mode. I’m tempted to cry foul, but the truth is I don’t think any of the engineering involved in creating this second mode is the root cause for any of this figure’s problems. I suppose it was also necessary to give Galvatron’s little head robot buddy a place to sit.

Nucleon sucks. Oh, at heart he’s the same as the other little head robots, but in this case he’s cast in that same terrible gray plastic that I just can’t stand. It looks so cheap and unfinished. At least they painted his little eyes red, but that’s it. To add insult to injury it’s the same plastic they used for the cockpit, so when I sit him in there he just sort of blends in. This is bad comedy. But I haven’t even started to get to the really bad stuff yet. Let’s transform him.

OK, so when he’s just standing there, I can find a lot to like about this figure. The overall sculpt is fantastic. I love the chest and those legs, it’s all extremely evocative of the original G1 design that I loved so much. And that makes me happy. He’s also an impressively bulky figure for a Voyager Class and his fusion cannon looks absolutely stunning on his arm… until you realize there’s no way to turn it to the side. But more on that in a moment. You see, it’s that first glance that makes me want to love this figure so badly. But everything after that brief instant is like chewing tinfoil. 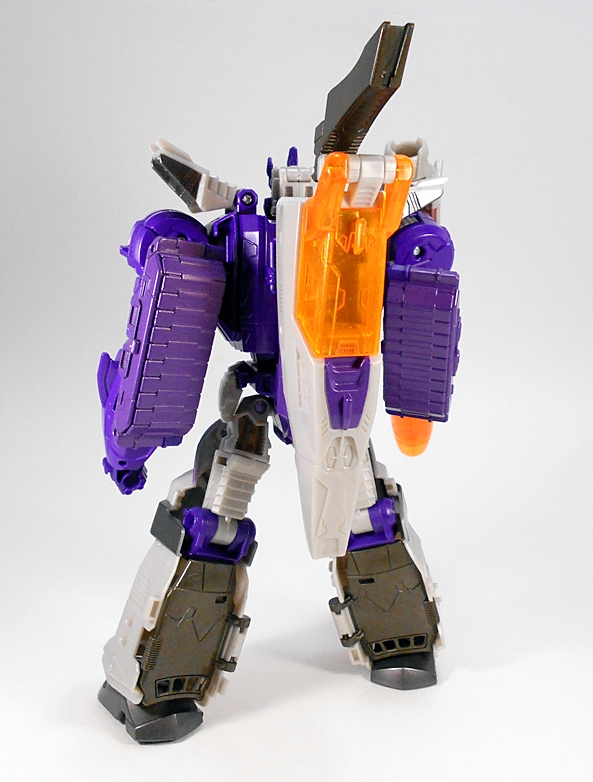 From the back things aren’t quite so pretty. He’s got that whole front of the jet hanging off his back. Hey, remember how Galvatron had the front of a jet hanging off his back because he could turn into a jet? NO, I F’CKING WELL DO NOT!!! I would have been perfectly happy if they left that second mode out and cleaned up his back, but to be honest, that jet kibble doesn’t detract from the figure the way so many other things do. It’s actually the least of his problems… unlike those tank treads hanging off the backs of his arms. But I’ll come back to that. First, let’s talk about his head. 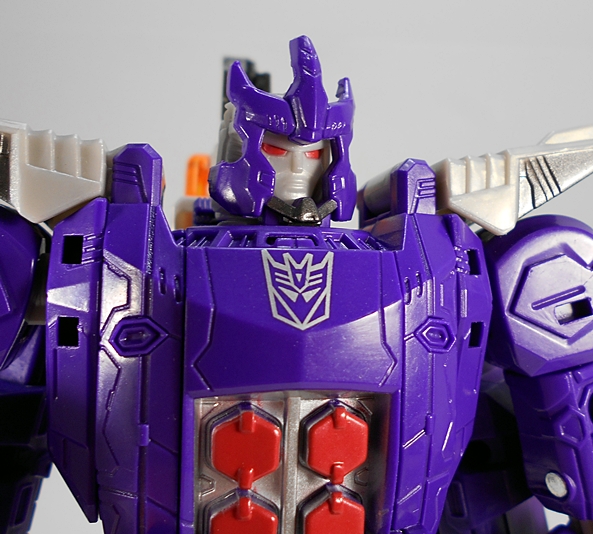 Yes, that package art sure was misleading. It shows the whole head, “helmet” and all, coming down and attaching to the body. But the purple portion of his noggin is not actually part of his noggin. It’s a sort of face-frame that springs up out of his chest and hovers a in front of his head. What the hell is a face-frame, you ask? Why, it’s what I call this, because the idea is so insanely stupid that I had to invent an equally insanely stupid term to describe it. WHAT IN THE NAME OF HOLY PRIMUS WERE THEY THINKING WHEN THEY DID THIS??? Not only does it look like garbage, but he can barely turn his head because of it. It seems pointless to even point out how much I hate that his head is made of that rotten gray plastic. DAMN YOU FOR THIS, HASBRO… DAMN YOU TO HELL!!!

But I’m not done yet. No, don’t pass out on me, yet. We haven’t reached the most frustrating part of this abomination. The articulation. Forget how many points he has. Forget that his elbows are double hinged. From the waist up nearly every move of his arms bumps up against something else. Those hinged things on his shoulders, those treads on the back of his arms… and the cannon! Oh, that cannon that sticks on the front of his arm like a giant dead porpoise going through the final stages of rigor mortis. He can stand prone with it or with a lot of fiddling you can get it into a firing position. Everything else I try to do with this figure is so heartbreaking. 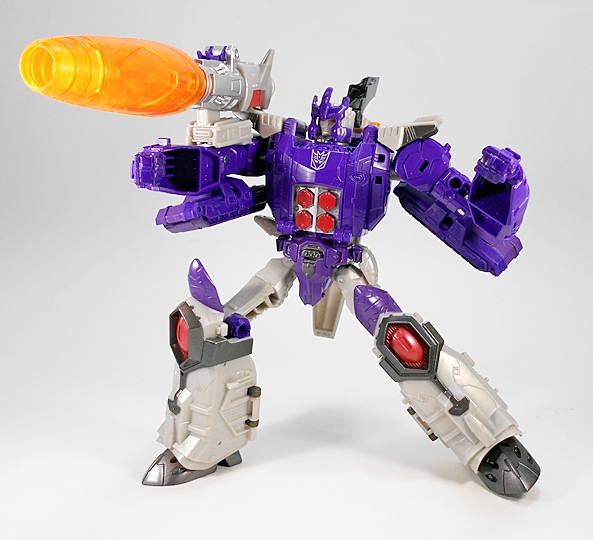 I’m at the point now where talking about this toy is making me sad and angry, and he is absolutely no fun to photograph, so I’m going to call it a day. Congratulations, Galvatron. Not only were you the first true disappointment for me in the Titans Return line, but you actually broke me. I don’t wanna celebrate Transformers Thursday any more today. You’ve ruined it. RUINED IT!!! Even if I just stand this guy on the shelf and don’t try to pose him, I still have that stupid head looking back at me. I truly and honestly want to know what inspired that feature. How did they think that was value added? Was it just necessary to make him a Headmaster? If that was the case, they shouldn’t have done it. There’s a decent figure here buried somewhere under a bunch of bad decisions. And so here we are, another failed attempt at Galvatron and who knows how long it will be until they try again.