It’s no secret that Mythic Legions stole a lot of the attention that I would have been lavishing on Boss Fight’s Vitruvian HACKS line. Maybe that’s a good thing, because it allowed some of my frustration over the HACKS Kickstarter to simmer down and now I can really enjoy the figures. I’ve already looked at six of the releases from my original Backer Rewards, but I have a lot more to cover, and a new figure just hit my doorstep this week making me realize I should get back to it. 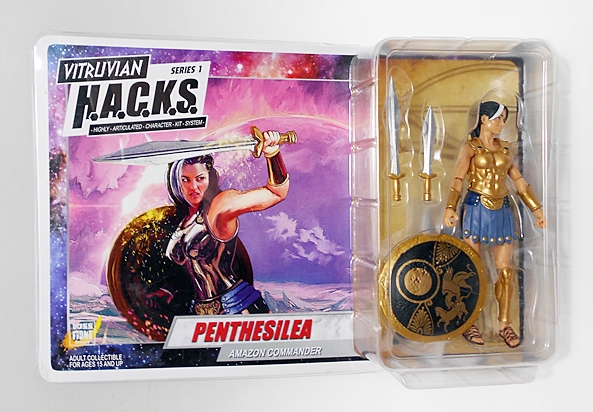 Enter Penthesilea, the Amazon Commander or Warrior Queen depending whether you want to go by the front or back of the card. The packaging here is the same as all the releases, except for the pair of boxed exclusives. The presentation features some colorful, character-specific card art and a nifty collector friendly design that allows you to slide the card out and get into the bubble without having to slice or cut anything. Penthesilea hails from Wave 5, which I believe is the most recent, although the back of the card shows two more waves on the way after that, both with some excellent looking figures.

From the neck down, Penthesilea is a straight repaint of the Amazon Elite Warrior. The female buck this time is Caucasian and the armor consists of the fully enclosed piece for the torso, as well as bracers and grieves, now painted gold instead of silver. I love that sculpted musculature in the chest plate! There’s also a blue “skirt,” replacing the black on the previous release, made to look like individual leather strips. The quality of paint Boss Fight has been using on these figures is top notch and the gold in particular is quite striking. Even the paint applications on this figure are very sharp right down to the tiny rivets on her belt and the individual straps on her sandals.

The articulation is standard for the line and features rotating hinges in her shoulders, elbows, and wrists. The legs have ball joints at the hips, double hinges in the knees, and the ankles are hinged and feature lateral rockers. There’s a ball joint in the torso and another in the neck. Penthesilea is pretty agile, but some added swivels in the biceps and thighs would have made her even better. These figures are designed to be somewhat modular. Every piece of armor is removable and the entire body can be broken down, but I haven’t attempted that with any of mine. 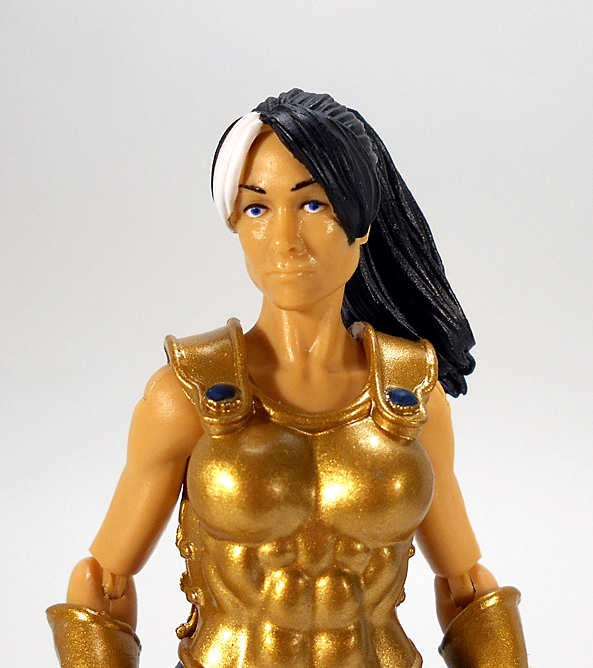 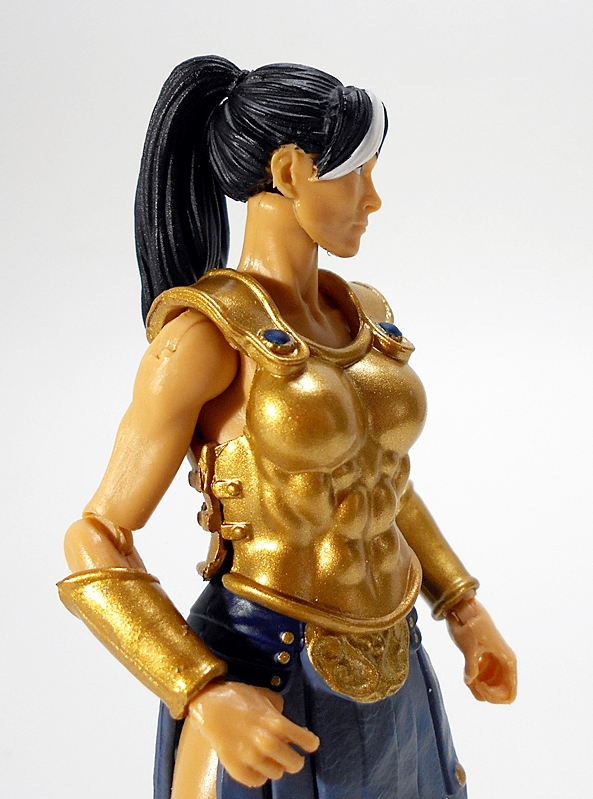 The head sculpts on the HACKS have been pretty good and Penthesilea continues that tradition. I don’t think she matches the card art all that closely, but I still really dig this portrait. She looks a bit more mature than some of the other figures and she has a stoic and possibly battle weary look about her. The paint on the eyes and eyebrows is sharp and straight and the white streak in her hair gives her a lot of personality. She also features a ponytail, which means getting a helmet on her is out of the question. 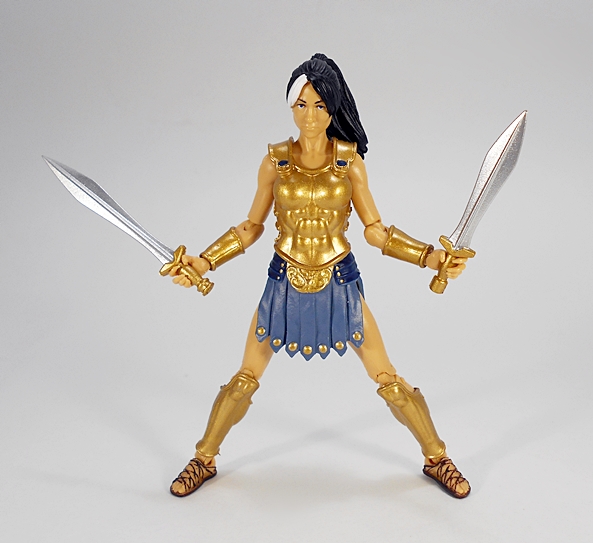 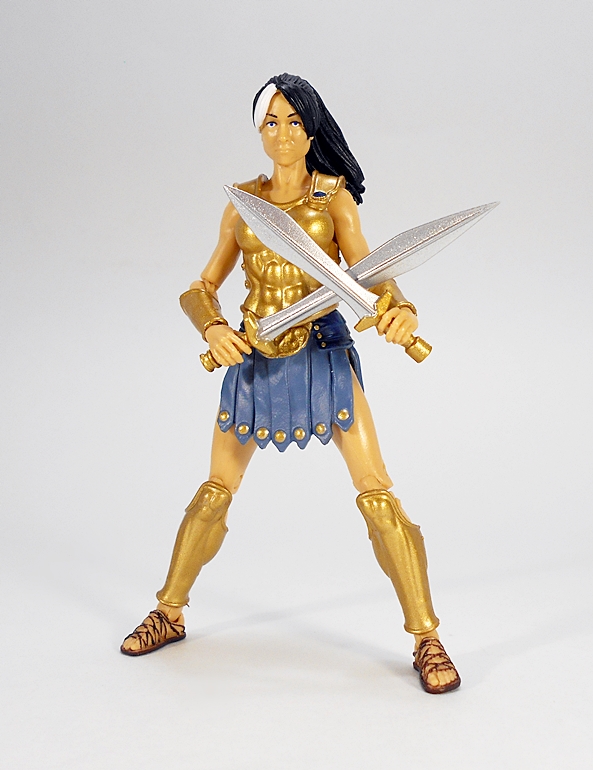 Penthesilea comes with three swords, all of which were included with the Ultimate Spartan Warrior, as well as some of the other figures, only here they are presented with clean decos and hilts painted to match the armor. You get a pair of leaf-shaped swords, one slightly longer than the other and each with unique hilt designs. The silver painted blades on these are just gorgeous.

The third sword is a repaint of the broadsword that came with the Amazon Elite Warrior. This is possibly my favorite sword in this line’s armory, but then again I really do love them all. The hilt is again painted gold to match the armor and the blade is painted with more of that lovely silver.

There’s a slot in the back of Penthesilea’s “skirt” allowing you to store one of her swords, so technically she can carry them all at once. 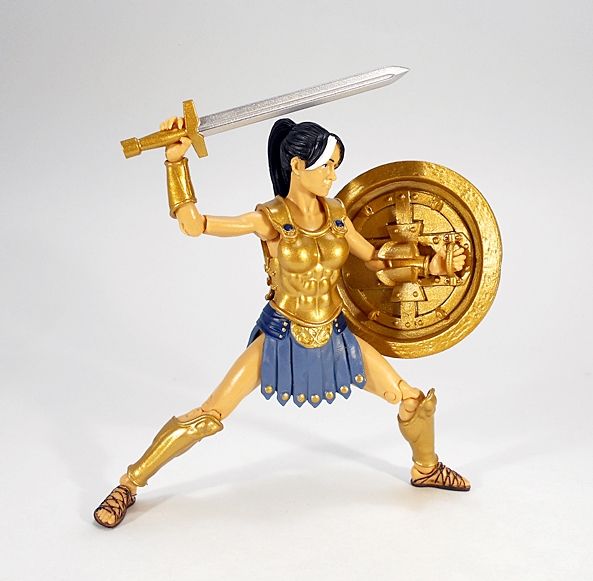 The final accessory is her shield. It’s the same great sculpt that we’ve been seeing all along, but with a new deco painted on the front. The art on the front is very reminiscent of the Classic Greek style and it depicts what appears to be a griffon eating a horse. Bad ass! The shield is mostly gold to match her armor and it features that amazing hammered texture, as well as some nicks on the face to show where it’s deflected blows. The inside of the shield is fully detailed and it features a sleeve and grab bar to attach to the figure’s arm. 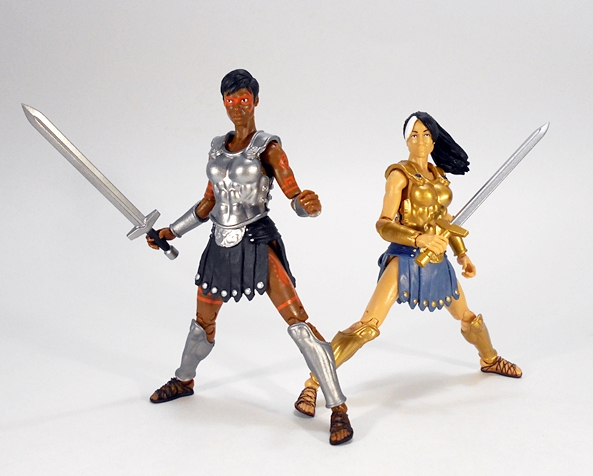 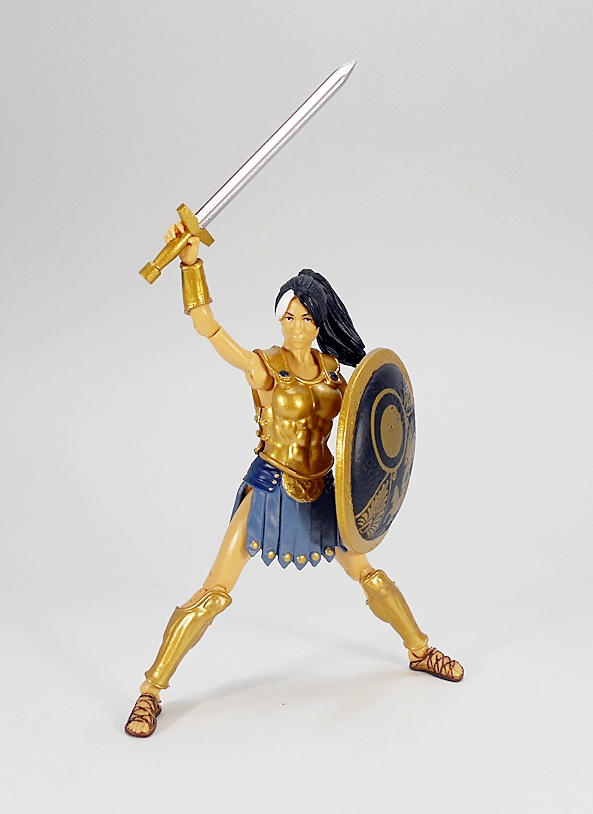 For a figure that is essentially a straight repaint with a new head, Penthesilea still feels pretty fresh and new. It may be because I haven’t looked at any of the HACKS line for a while. Then again, it could just be because I dig these figures so much, that even the variants really excite me. Her inventory may feel a little light after opening the two weapon-packed Exclusives, but what’s here still makes for a solid release and she may end up being one of my favorites in the regular releases.