It’s Transformers Thursday and still no new Titans Return figures for me to look at this week. I do have that G2 Superion set kicking around, but I’m saving that for a real dry spell. Luckily, I have an older figure to gush over today, thanks to a fellow collector on Twitter who posted a picture of this fella in their collection and making me realize that I needed him. This was a loose Ebay grab, so I’ve got no in package shot to offer. So, let’s have a look at Skyfall from the Transformers Universe line and jump right into his alt mode. 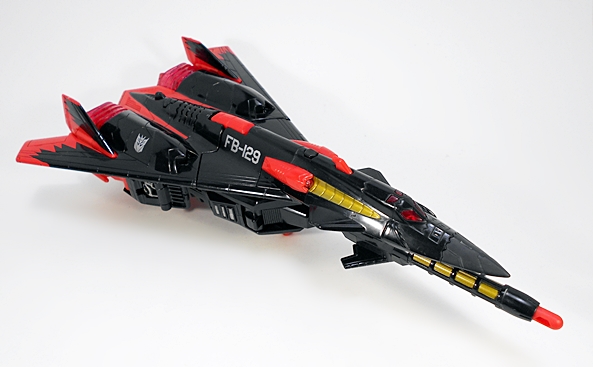 SEXY! This alt mode might look a little familiar. If so, that’s because Skyfall is a straight repaint of Silverbolt. Yeah, for some reason Hasbro decided to make a one-off, non-combining Aerialbot for their Classics/Universe/Generations line. I always thought that was weird. I owned Silverbolt, he was a great toy, but I eventually traded him away when I started collecting TFC’s Not-Aerialbots. He seemed superfluous. The fact that he got a Decepticon repaint gave me a great excuse to get the mold back into my collection again and as a brand new character. In his original G1 colors, this mold had a passing resemblance to Silverbolt’s old Concorde alt mode, I suppose, but with the back-swept fixed wings and the jagged cut rear, this fresh coat of paint really goes a long way to make it look like a lean, mean, Decepticon fighting machine.

Besides being a great alt mode, it’s the colors on this toy that really sells it. The new deco features some lovely high-gloss black plastic with gorgeous red and gold paint apps, all of which conspires to bring out the stealth fighter in this mold. Toss in some silver Decepticon logos and registry numbers and this is one gorgeous aircraft. There’s also some translucent red plastic on the windshields, the back of the engines, and set into the intakes. Because Skyfall is an Ultra Class he has some added electronics. You press the button on his back to cycle through the different effects. The first press offers a flyby sound, the second press is the engines starting up and flashing, the third press are the guns firing with those intake lights flashing. I’m not usually a big fan of electronics in my Transformers toys, but here’s an instance where I think they work great. 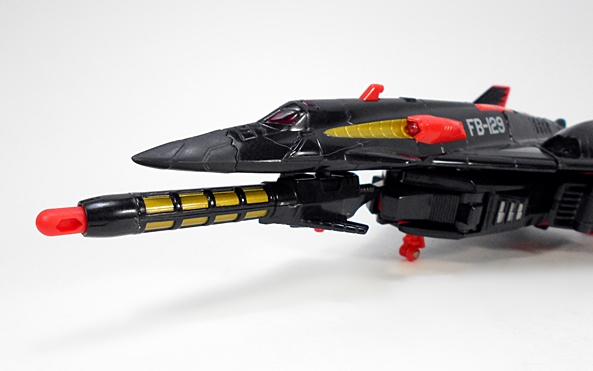 Skyfall also features a large missile launcher slung under the nose and canopy.  It incorporates the black, red, and gold color scheme of the rest of the aircraft and it fires pretty well. There are three sets of hinged landing gear and yes, because this is a Silverbolt repaint, there’s plenty of boxy robot kibble hanging off the bottom of the plane. Thankfully, it all tucks away pretty neatly. There isn’t a whole lot to transforming Skyfall. You just fold out the arms and legs and fold the aircraft onto his back. Those lights and sounds come into effect for the head reveal. When you push his legs up into place the head pops up and you get that wonderful transforming sound from the G1 cartoon as well as flashing eyes.

If you didn’t recognize Silverbolt in the alt mode, than surely you can see him here, as Skyfall is just Silverbolt with a more sinister paint job. I absolutely adore this robot mode. The entire torso is so evocative of the G1 aesthetic and I really dig the way the landing gear hatches sit on his shoulders. How cool would it have been if they could have converted these to opening rocket packs for Skyfall! Anyway, the deco retains the same black and red palate with a little gold and silver and once again the coloring on this figure is gorgeous. My only complaint here is that I think the empty gold square in his chest is an odd choice. They should have just moved the Decepticon logo from his right shoulder to there. But, now I’m really nitpicking. 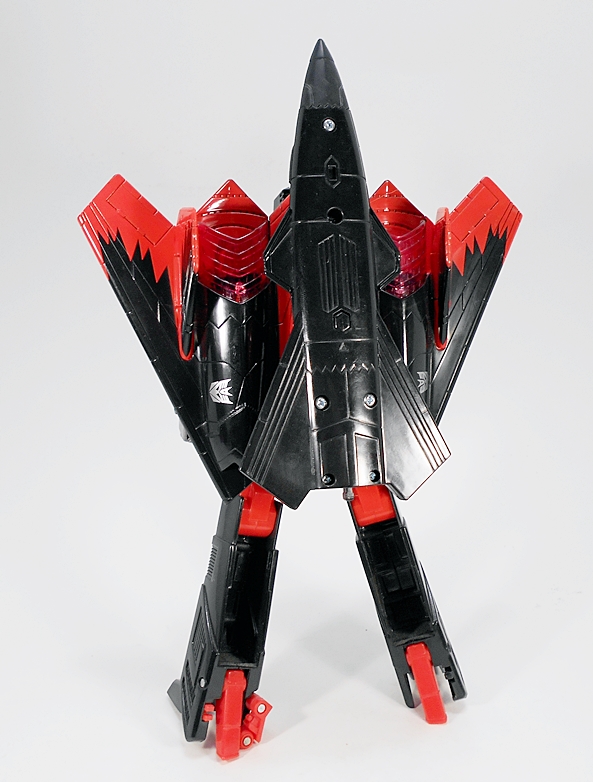 As mentioned, Skyfall wears the entire jet mode folded it up on his back. It packs away pretty well and isn’t nearly as kibbly as one might expect. It also doesn’t make him too back heavy. I think it looks fine, but it would have been even better if there was a way to rotate it so the nose was pointing down and the wings swept out like a cape.

The head is the same Silverbolt sculpt and it works surprisingly well as a Decepticon. What was a noble hint of a smile as an Autobot becomes a slightly smug smirk for a Decepticon. I dig the gold paint used for the face and those eyes look fantastic for that brief moment when they’re flashing after the transformation. In this mode you can still press the button on his back to get the firing sound effect.

The articulation here is nothing special by today’s standards, but not bad for a 2009 release. The arms and legs feature rotating hinges in the shoulders and hips and hinges in the elbows and knees. You also get swivels in the biceps and thighs and the head swivels as well. Nearly all the joints on this guy are strong ratchets and heel spurs help stabilize him. He’s a solid figure that can really hold a pose. 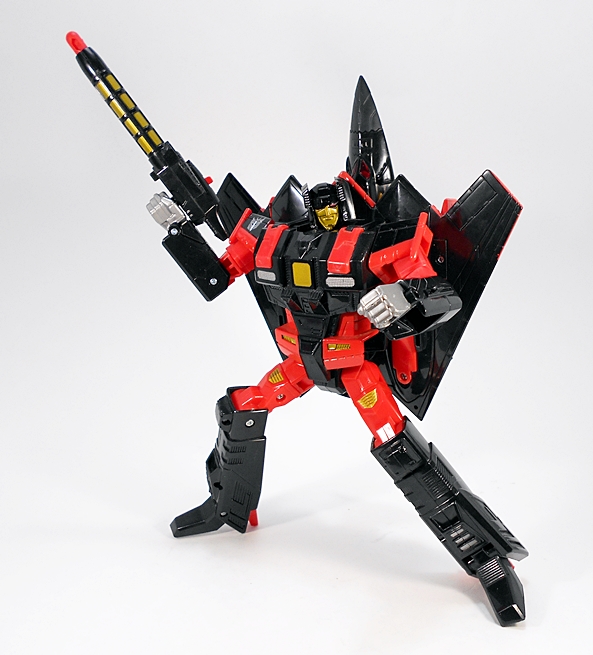 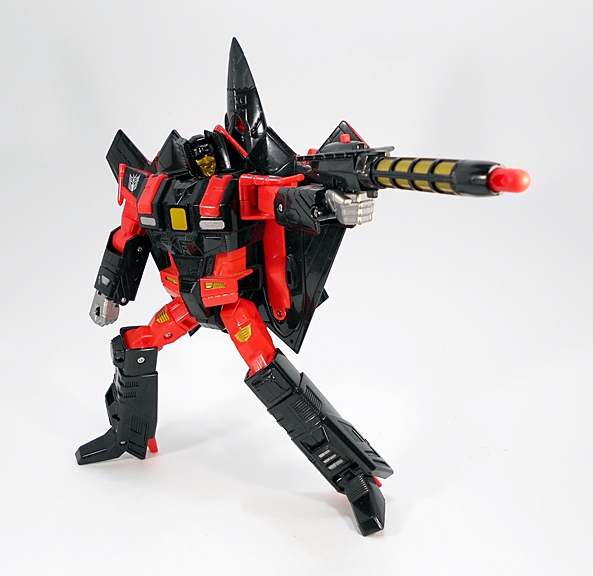 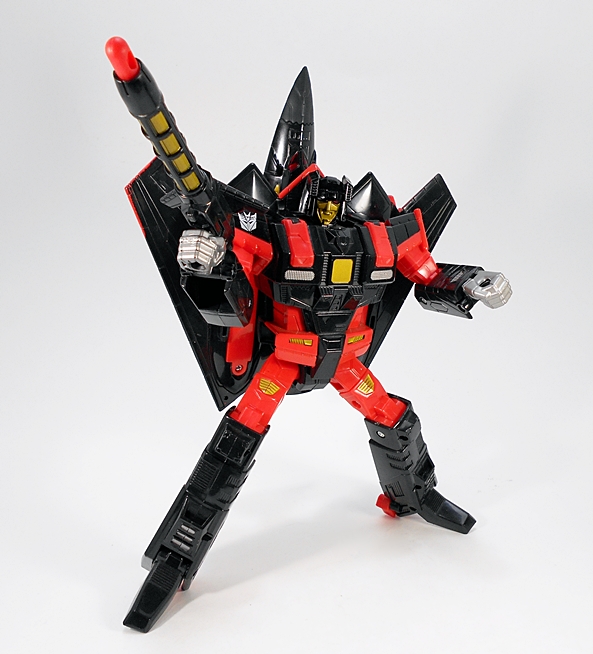 Naturally, the gun in his aircraft mode becomes his rifle in robot mode and he can hold it in either hand.

It’s been a while since I was able to gush all over an older Transformer, but Skyfall is definitely worthy of the attention. I think he scales really well with the Leader Class Decepticons, especially Combiner Wars Megatron and the Seekers. The aesthetics of both his alt and robot modes still hold up splendidly and while he’s a relatively simple toy for his size, he makes up for it with some value added electronics. He’ll serve my Decepticon forces well as a long range aerial spy. I mean with a name like Skyfall, he’s got to be a spy, right? I seem to recall these Ultra Class toys selling for around $30 new. I was able to pick up Skyfall in beautiful condition for $20, but half of that was shipping, and well worth every penny to get this mold back into my collection.