Hurray! It’s time for another depressing look into Matty’s still-born ThunderCats Classics action figure line. The second figure in this very short-lived line is none other than Jackalman, and that’s great, because why spend the slots getting us an entire team of ThunderCats when Matty can give us little bits and pieces of an incomplete line? Why not just kick me in the dick with a steel toed boot while you’re at it, you assholes! Anyway, in addition to being cut short, these figures have also been arriving really late. Jackalman is October’s release and mine only just arrived a few days ago. 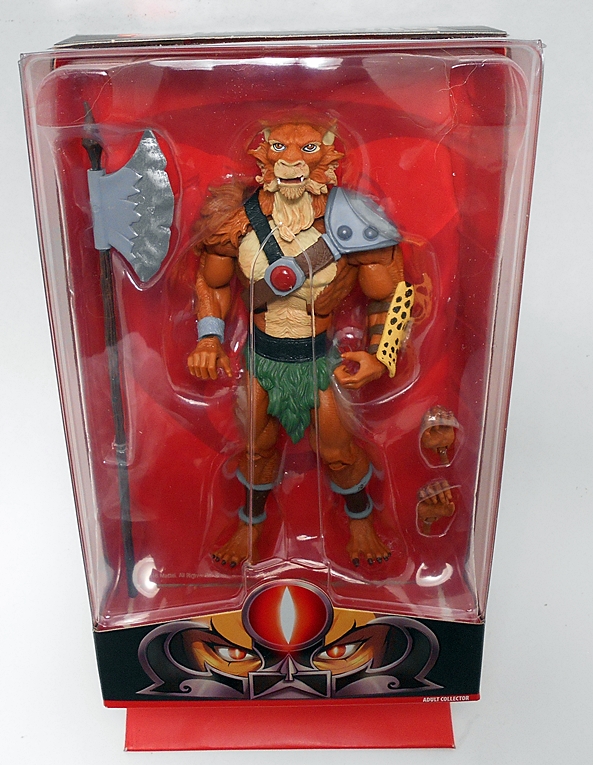 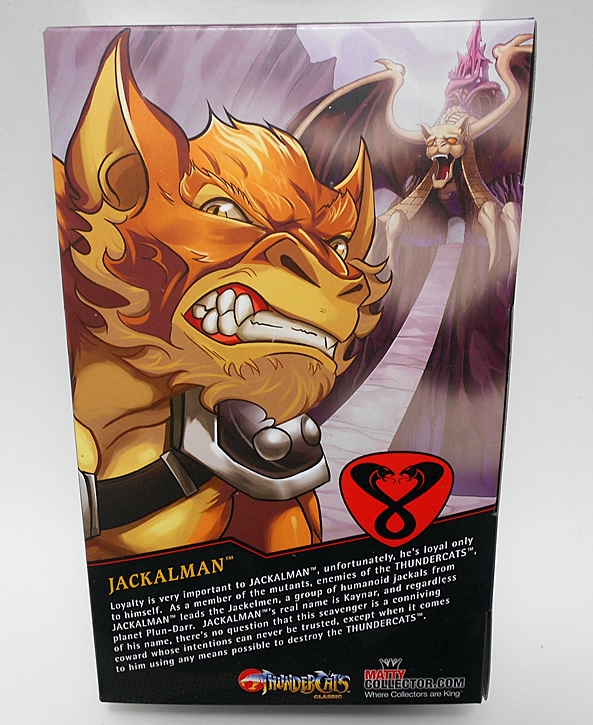 Here’s a look at the packaging, which is mostly the same as we saw with Lion-O. You get a black mailer box, this time with Mumm-Ra’s logo on the front and some nice monochrome art on the side panels. Inside, the figure comes in a colorful window box with a trap door in the bottom to slide out the tray. You get a great look at the figure from the front and the back panel has some rather colorful and unconventional character art, as well as a blurb about the character. In a nutshell, the presentation here is absolutely superb and it’s totally collector friendly. Jackalman has the dubious distinction of being the first and very likely the last of The Evil Mutants to be released in this line, unless of course Super7 can work licensing miracles. Yeah, that isn’t going to happen.

And that’s a crying shame because this figure is fantastic! Jackalman makes use of a fair bit of the MOTUC Beastman buck. I never thought it would work as well as it does here. And yet, Jackalman feels even less like an MOTUC-styled figure to me than Lion-O did. Part of the illusion of newness comes from the clever way Matty layered the neck and additional shoulder fur onto the buck by sculpting it as part of the left shoulder armor and chest straps. Jackalman is still wearing a belt and furry diaper, but these are both new sculpts and are very distinctive. The minimalist detail on the shoulder armor really lends itself to an animated look, and I dig the leopard print armor plate strapped to his forearm.

The coloring on this figure is nice and vibrant. The orange-brown fur is pretty close to Beastman’s coloring, but I think this figure still manages to carry a unique look without feeling like a glorified custom. I will concede that the paint could have been cleaner in some areas. For example, there’s a little chipping to the gray borders on his ankle cuffs and the white paint on my figure’s right fang is sloppy. I’d say that the paint QC is in step with the recent MOTUC figures I’ve been getting, which is to say not terrible, but not as good as it was in the earlier days of the line either. 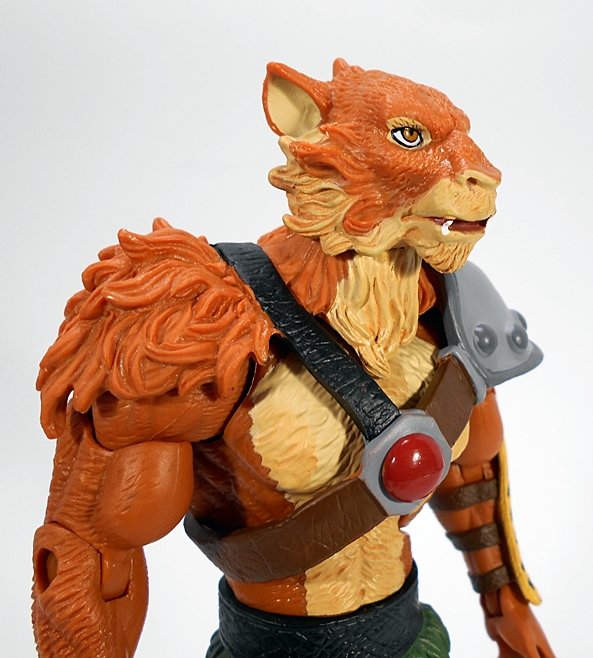 If there’s any one thing that really sells this figure for me, it’s the head sculpt. They’ve really managed to capture the personality of this particular Mutant in the portrait. It’s so good that it just reinforces what a damn shame it is that we’ll never get to see them take a stab at Vultureman, Monkian, or Ssslithe. 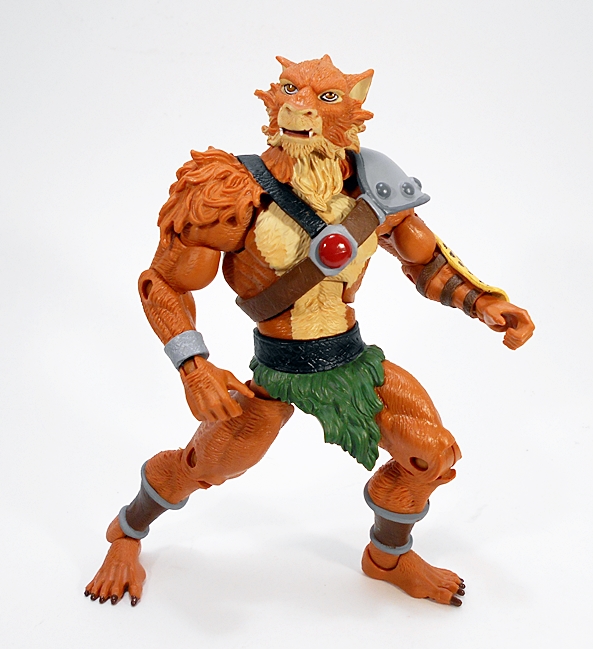 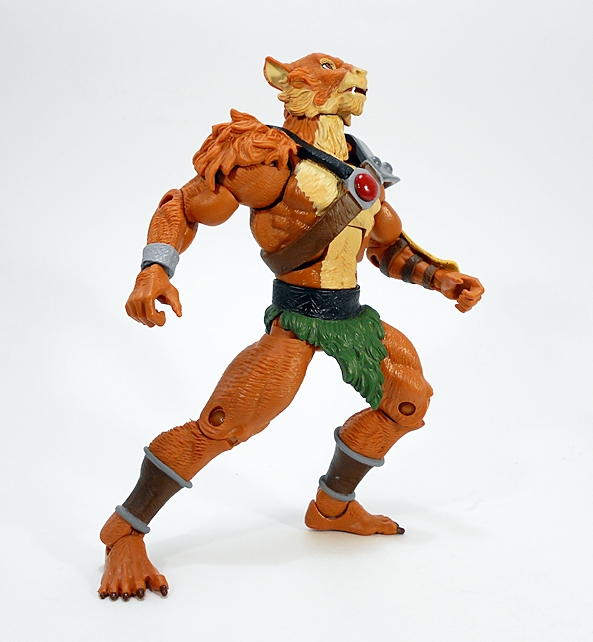 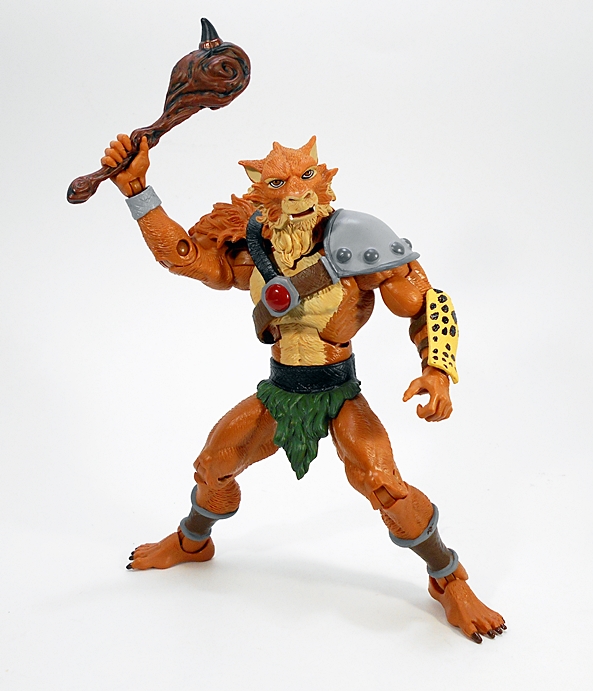 Speaking of accessories, Jackalman comes with two weapons. First off, we have this pretty cool club with a spike in it. It’s a wickedly gnarled sculpt with a lot of personality for a simple club.

Even better, you get this amazing axe. It’s a two-handed pole weapon with a wood grain pattern sculpted into the shaft. I love the crude, hammered look to the axe head.

While the paint could have been a little tighter on my figure, I still think Jackalman is a fantastic release and yet another example of how great this line could be if it were ever allowed to go the distance. At the same time, I can’t help but feel a little resentful that with so few different figures being made, one of them is Jackalman. Yes, I realize that the releases were planned out before the line was shit-canned. And yes, it’s bad form to blame Jackalman for not being Cheetara, Tygra, or even Ssslithe. But it’s hard not to think that way.