Transformers Thursday is on hiatus this week, but I hope to bring it back next week with a possible two-parter. In the meantime, allow me to turn my attention back to the ill-fated ThunderCats Classic line from Matty Collector. I’ve only got two more figures in this line left to look at and today I’m checking out Mumm-Ra. Ancient spirits of evil, transform this decayed form to Mumm-Ra, The Ever Living!!! 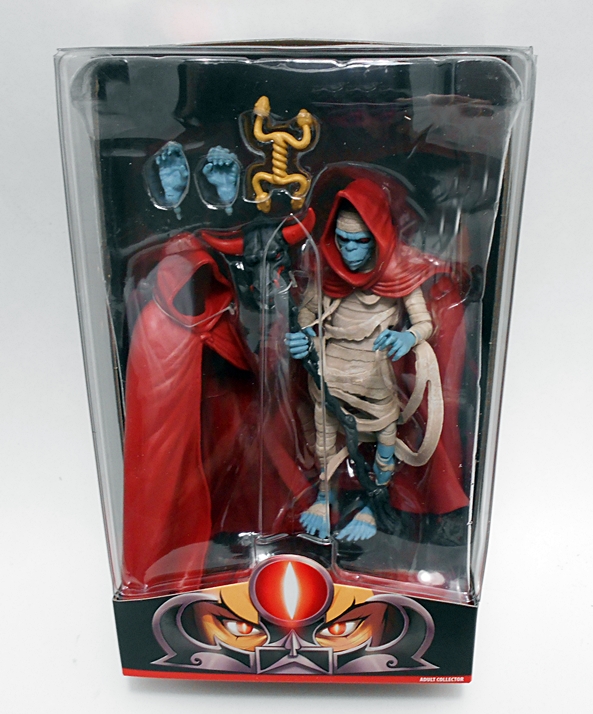 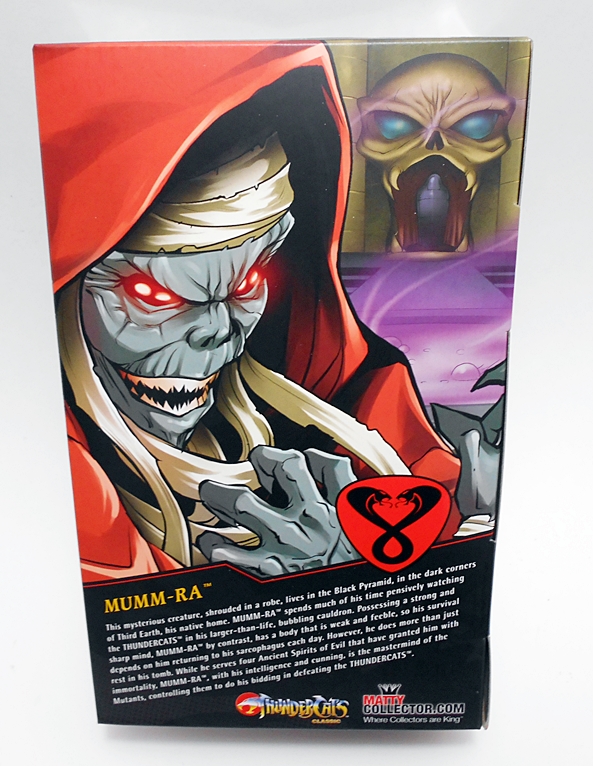 Mumm-Ra’s transformation never got old for me. I loved hearing him say those lines. I loved the musical fanfare that kicked up during the sequence. And holy hell, I loved his demented “MYEEEEAAAHHHHHHHH!” that always punctuated the change. This dude was pretty terrifying for after school cartoon fare and this is the first time I’ve owned his mummy form as an action figure since the release from the newer ThunderCats 4-inch Bandai line. I’ve got nothing new to say about the packaging, other than the trapdoor design makes it totally collector friendly and absolutely gorgeous! 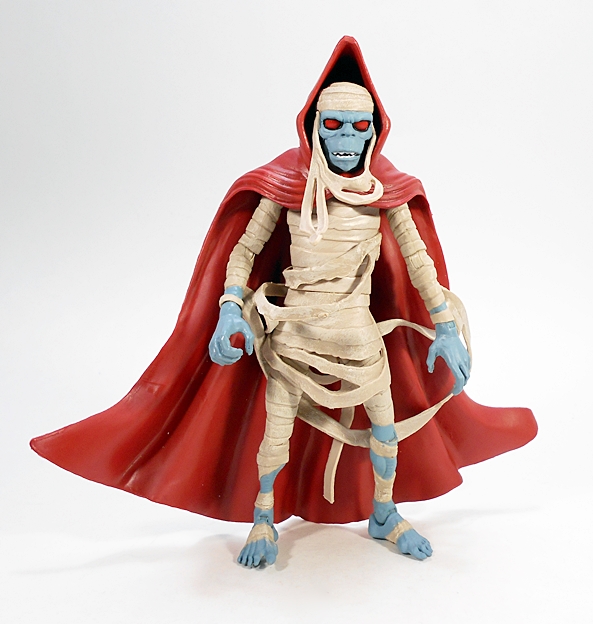 And speaking of gorgeous, just check this guy out! Now, there are a few things about this figure that irk me a bit, but it’s hard to argue with his overall appearance. This lesser form of Mumm-Ra has really gotten the short and of the stick throughout the character’s action figure history. He’s been mostly an afterthought, or an overgrown accessory. The LJN original was a largely a static piece and Bandai’s new version was only a bit better. Here we get him in full on action figure form and kitted out with full articulation. Is all that articulation worth it? Well, I’m getting ahead of myself. Let’s take a moment to enjoy the wonderful sculpt and paintwork. 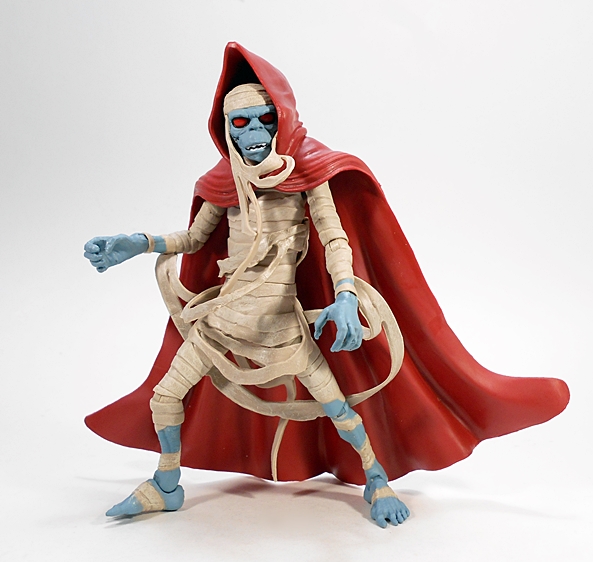 Mumm-Ra comes out of the package with an open, billowing hooded cloak that lets you get a great look at his delightfully creepy mummy wrappings. Some of the bandages are sculpted as part of the buck, while others are cast in soft plastic and attached for a more realistic effect. They even attached some bandages to each of his arms, so they hang down behind him and add to his ancient and ragged look. His gnarled blue hands and feet are exposed and he does come with an extra set of hands to help hold his accessories. While I enjoy the concept of the open cloak, I’m not a big fan of the way the hood crowns up over his head. It looks odd and I’m not at all sure why they did that. Maybe the unseen wind that’s blowing the rest of the cloak is causing the hood to rise. I guess it’s not that big a deal… 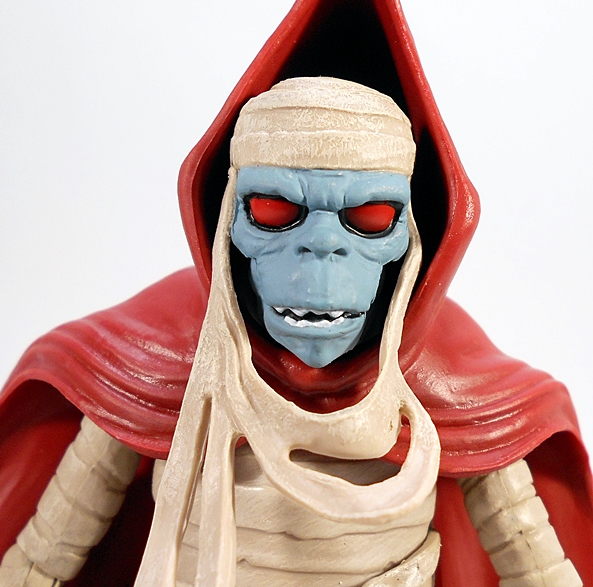 Especially when the head sculpt is so damn good it makes me want to weep for this line’s early demise. They’ve managed to capture the look of Mumm-Ra’s decayed portrait perfectly. From the prominent mouth to those large soul-less red eyes, I wouldn’t change a thing here. Except that pointed hood. Yup, it’s still bugging me. 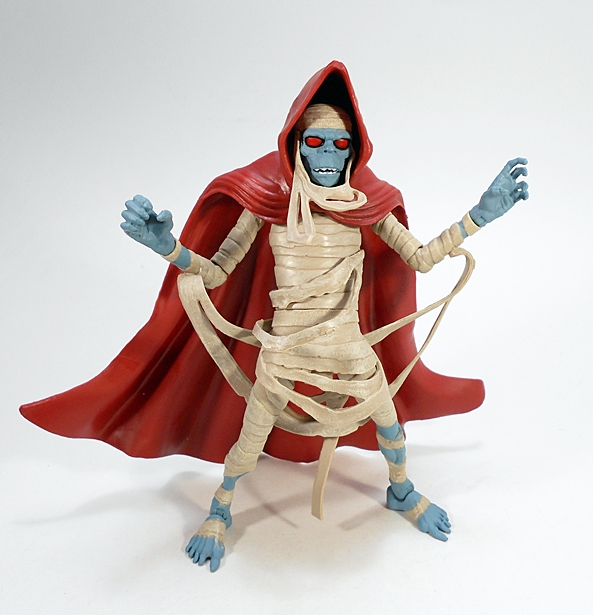 The articulation consists of rotating hinges in the shoulders, elbows, wrists, hips, and knees. The head is on a ball joint, there’s a swivel in the waist, and the ankles include both hinges and lateral rockers. The level of articulation here is far more than I ever expected to get in this figure and to be honest, it’s all I really need. With that having been said, there are certainly limitations. The bandages that connect between his arms obviously hinder the arms. The coiled bandages below his waist that form a sort of skirt also inhibit his hip articulation. Like I said, I’m not looking for much more here, but it wasn’t until I started shooting pictures that I realized there’s only so much you can do with this fella. 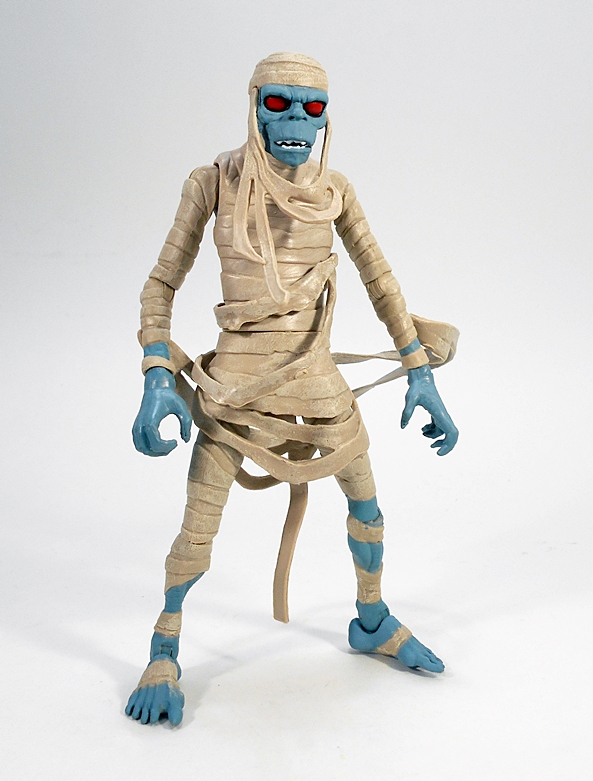 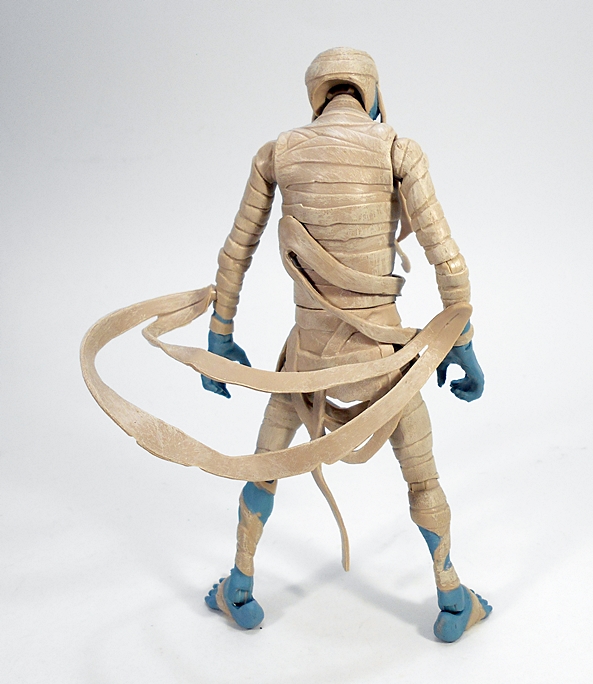 Mumm-Ra also comes with a second cloak and changing him into it allows for a rare look at Mumm-Ra sans cover-up. Nah, I’m never going to display him without one of the cloaks, but it’s still cool to see what’s going on under there. I don’t recall us ever getting a look at him like this in the cartoon. Obviously the designers had to take some liberties and I think they did a damn fine job. 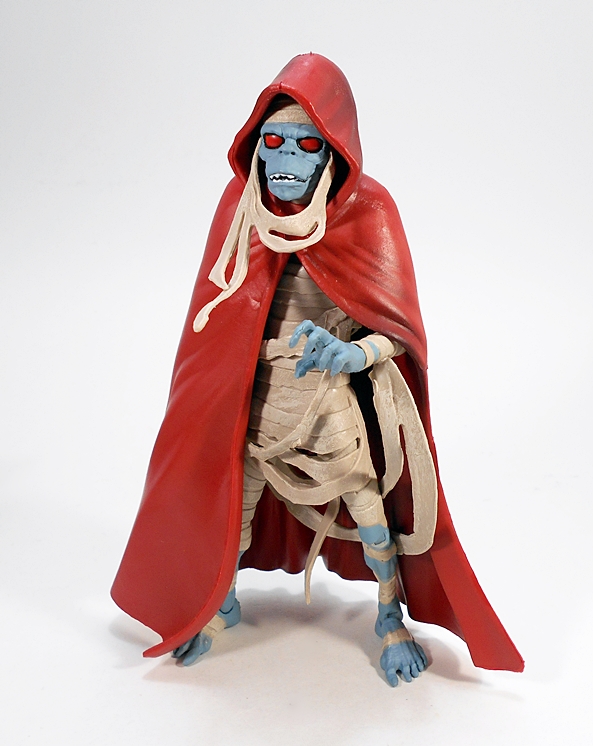 The second cloak is closed up and more form fitting. This is really the look that is most familiar to me from the cartoon and I think the fit of the hood here looks loads better. Yes, on the downside, it severely curtails the figure’s articulation, which is why it’s really nice that they gave us two. When he’s displayed like this, the best you can really get out of him is a left elbow bend to allow him to hold his staff. And speaking of which… 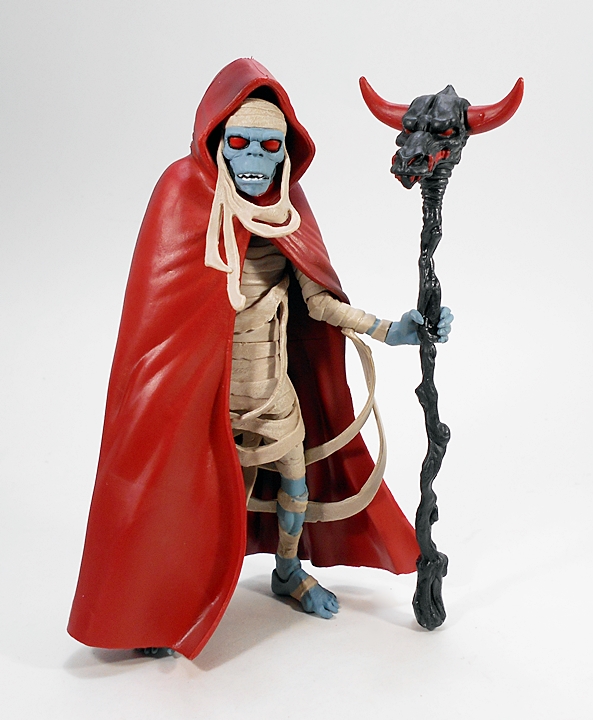 The staff is one of the two other accessories he comes with. Like its master, the staff is gnarled and twisted with some lovely attention to detail in the sculpt. It’s capped off by a wonderful, snarling demon dog head with red eyes, horns, and teeth. Mumm-Ra looks so damn iconic holding it. 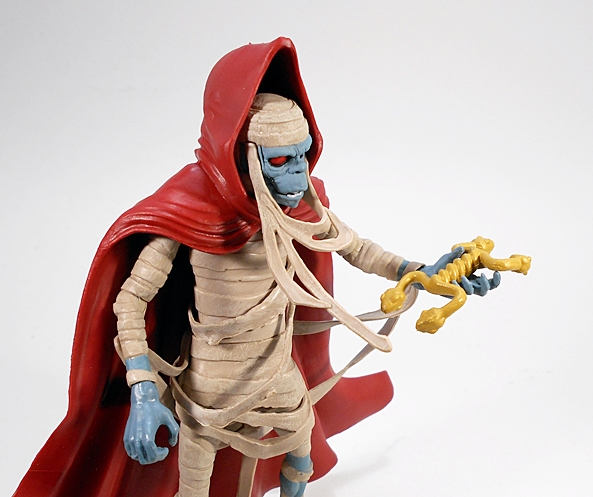 You also get the hilt to the Sword of Plundarr, which is a damn cool bonus, although each collectors’ mileage may vary on this piece. 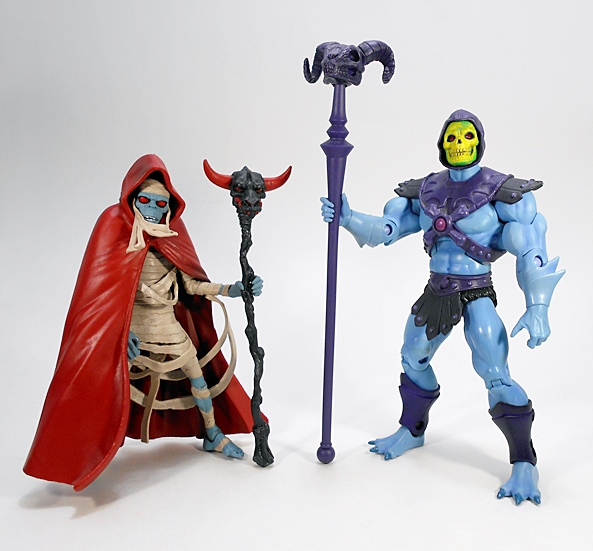 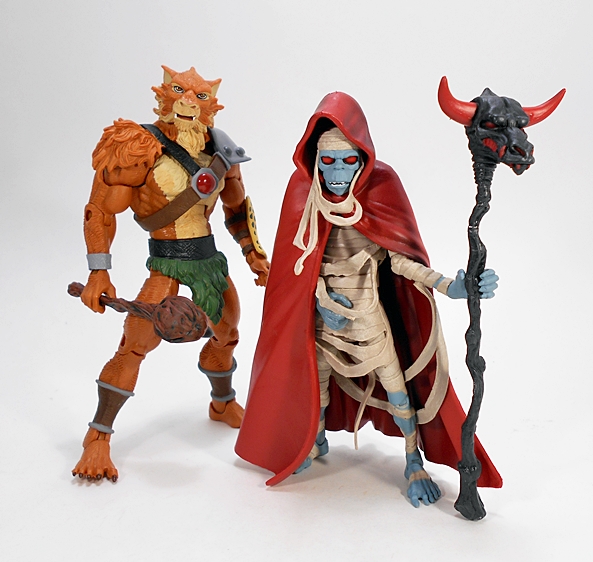 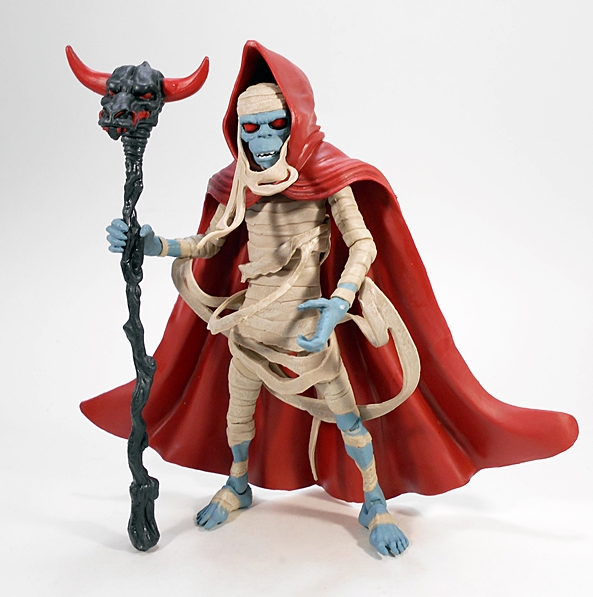 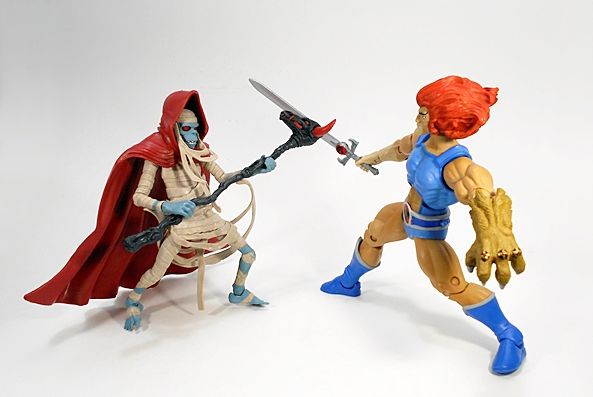 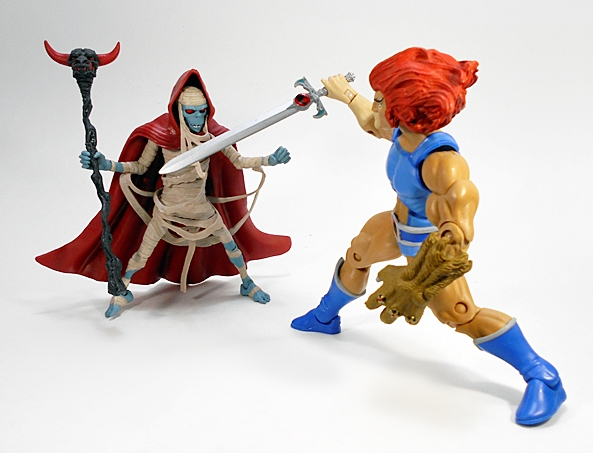 Despite a few very minor gripes, I really love the way this figure turned out. It’s so cool to see this level of attention, detail, and articulation lavished on a this version of the character for the first time. Owning him makes me want to go hunt down LJN’s version of Mumm-Ra’s tomb as a display piece for him. But then it feels like I’ve already thrown enough money into this doomed line. I hate to be that way. I should be able to enjoy a great figure for what it is on its own. I suppose it’s at least cool to have a Lion-O and Mumm-Ra to display on the shelf, whereas the other figures really just rub salt in the wound, knowing that it’s unlikely my ThunderCats and Evil Mutants will ever be complete. And with that bummer of an ending, when I next revisit this line, I’ll be checking out the last figure, Panthro. In the meantime, I’m still waiting for Super7 to snatch this line from The Abyss with news of a licensing deal. Maybe at Toy Fair next week? Wouldn’t that be something!