Sorry, folks. No DC Friday this week. I’ve still got a whole case of 6-inch Star Wars Black figures to go through and I need to start chipping away at them before more arrive. So today I’m opening a figure that I am pretty excited about finally getting. It’s Obi-Wan Kenobi from Episode IV: A New Hope!

Obi-Wan got something of a pre-release back at last year’s SDCC with some snazzy packaging and exclusive extra bits. The regular retail packaging offers no surprises, it’s just the same old stuff. It’s collector friendly and the side panel features the figure’s name and number. I have only saved the boxes for a handful of these figures and alas, Obi-Wan’s box is destined for the bin. You’ll note that the figure comes packaged with his cloak on, but I’m going to start with it off.

Sculpted robes often pose problems in terms of a figure’s overlook and articulation, but here I think Hasbro did a reasonably nice job on both counts. There’s a good amount of detail in the outfit itself including lots of folds and wrinkles. There’s also a very subtle texturing to drive home the appearance of cloth. The belt sculpted belt features the pouch on his right hip and a hook to hang his lightsaber hilt. Unfortunately, the blade doesn’t seem to want to come out of my lightsaber hilt, so that hook isn’t doing me a lot of good. 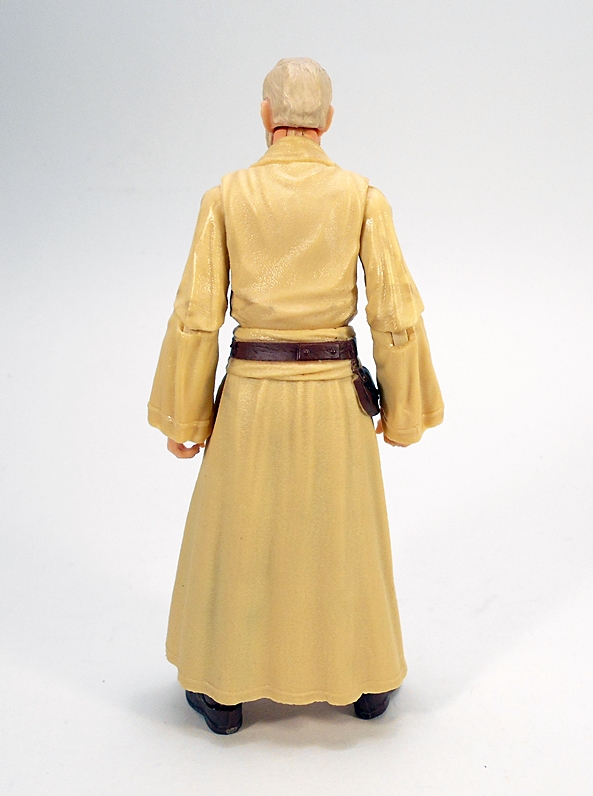 Loose sleeves like these are particularly tricky for sculptors because they should look considerably different whether the character has his arms at his sides or raised in an action pose. Here, Hasbro went for a compromise by putting the wrists right in the middle. They look fine with the arms down, but rather unnatural with the arms up. I guess I’m OK with this, as I doubt I’ll be displaying him in an action pose. I do really like how the wrists are set fairly deep into the sleeve, as it makes the plastic garment more convincing.

I think the portrait here is passable in general and maybe better than average for this line. It really varies wildly based on the angle, distance and lighting. And yes, that’s a left-handed compliment. I would have liked the detail to be a little sharper and the paint is the same sub-par stuff we’ve been seeing for the bulk of these releases. I’d argue that the likeness is certainly there, but is this really much better than they could do in a 3 3/4-inch figure? I don’t think so. In the case of this figure, let’s just say the closer in you get, the less it works, but I guess I’m fairly satisfied. 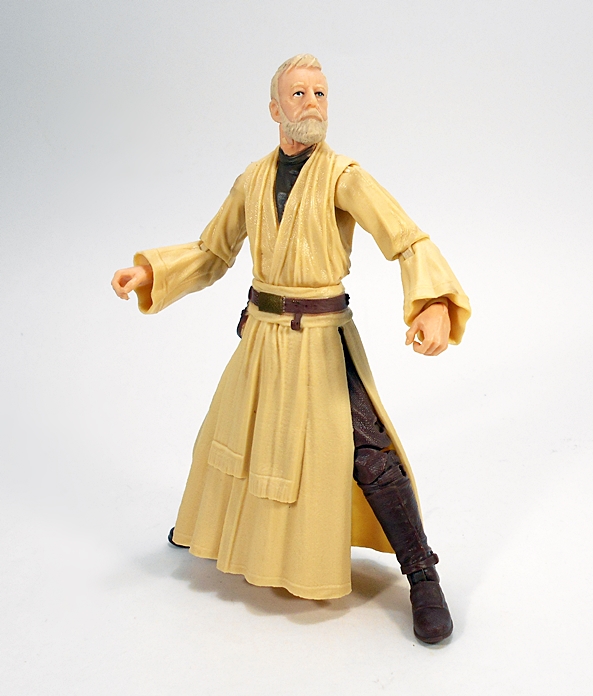 As for articulation, there’s certainly a good amount of it here. By Episode IV, Obi-Wan’s days of somersaulting ridiculously all over the place were over (thank God!), so I’m not requiring a whole lot from this figure. His arms feature rotating hinges in the shoulders, elbows, and wrists. The legs are ball jointed at the hips, have double hinges in the knees, and swivels in the thighs. The ankles are hinged and have lateral rockers. There’s a ball joint in the waist and both a hinge and ball joint in the neck. Below the belt, the plastic robes are slit up the sides so as not to completely hinder the leg movement. 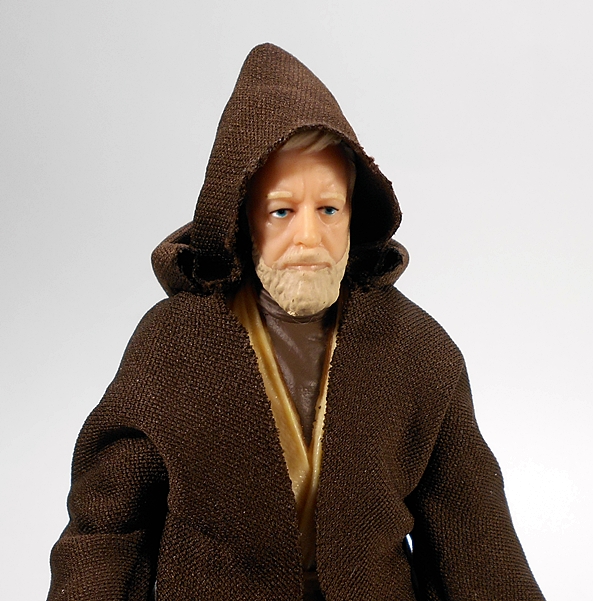 The softgoods cloak fits the figure very well and it looks great on him with the exception of the hood, which doesn’t fit close to the back when its down. That’s understandable, as at this scale there’s no weight to the fabric to let gravity do its job. If I futz with it enough, I can get it to look acceptable. I may look into using a small pin to keep it under control. It does, however,  look pretty great with the hood up over his head. You can also pull it further down over his head to hide his face for when he needs to scare off Tusken Raiders. The stitching is neat and I can’t imagine that I’ll be displaying the figure without this on most of the time. This is exactly the sort of thing that was sorely missing from the Jedi Knight Luke figure a few waves back. 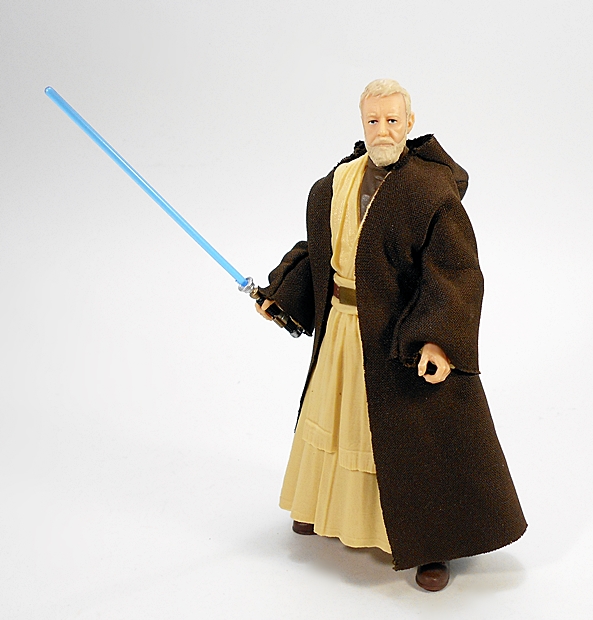 I’ve already mentioned the lightsaber accessory and how my blade doesn’t want to detach. Otherwise, this is a pretty great little piece and the sculpt and paintwork on the hilt are both exceptionally good. In fact, I’d say this is arguably the best looking lightsaber hilt this line has produced. 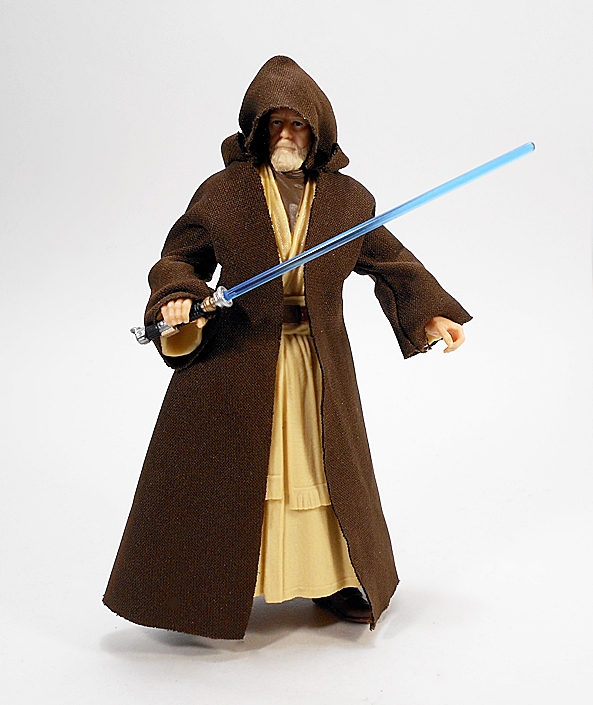 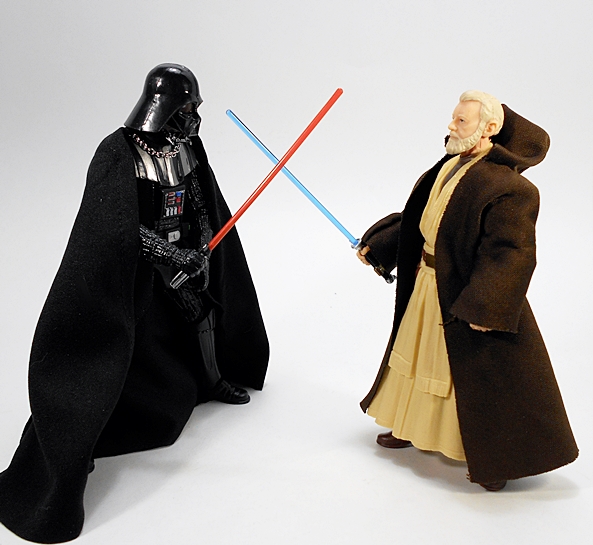 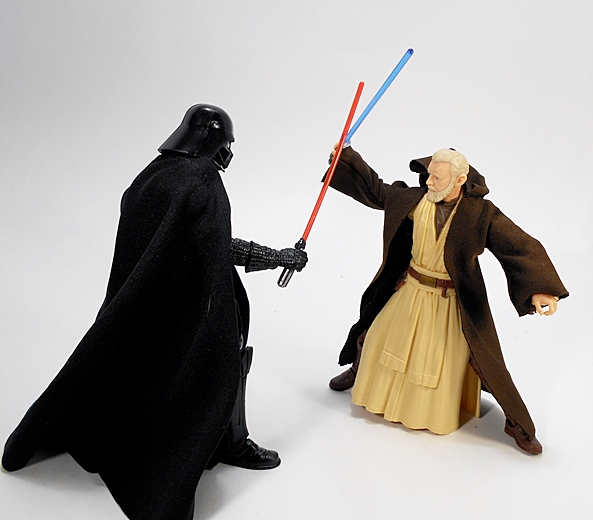 In the end, Obi-Wan turned out to be a pretty solid figure. He represents the usual ups and downs that characterize most of these 6-inch Black Series releases. The sculpt is overall pretty good, the cloth robe is a great, albeit in this case essential, addition, and if Hasbro could just invest a little more in the paint quality on these figures, they could really raise the bar a couple of notches.